Good Morning! I’m sorry May’s column is so late. It’s also not what it was supposed to be – The First Annual 37th Frame Lens Awards. Coming, coming soon – don’t worry.

I’m pleased to report that I’ve successfully initiated ade factopublishing company, called "Bearpaw Booksellers," and that Bearpaw Booksellers has successfully published its first book,A Hoosier Tale. This little book is really just a trial balloon, so to speak, so I could learn how this is done.A Hoosier Taleis now past its sixth revision and at a fairly high state of finish, with front and back covers, an ISBN number and barcode, an actual title page that (I hope) is actually on a right-hand page, and fairly polished text. (It’s a story I wrote many years ago that many of my friends have enjoyed, and yes, that’s me behind the able-handed pseudonym.) So why should you care? Because the very next project is the very vaporousThe Empirical Photographerwhich has given me so much trouble, and for which so many people have been waiting so very, very patiently. It could be up and available as soon as soon as Wednesday the 11th of May, although it will be considerably longer before I’ll be able to fill all the pre-orders. I’ll be working on it, at least. Well, it’s progress!There are two more photo books in the queue after that one, too. Fun stuff. Now on to this month’s column. Although it may not interest you at first blush, read down a bit to the subhead called "Getting Past It." I think there may be some thoughts in there you can use, especially in these digital days whennobodyis really past it. 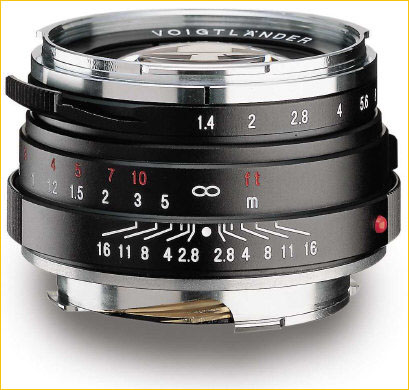 40mm has long been my favorite focal length for 35mm cameras. I got "turned on" to the focal length when I interviewed Sally Mann forCamera & Darkroommagazine in the 1980s. She told me she had supported her artwork by doing lots of small freelance jobs, including many for the local military academy. She said she used Olympus OM cameras, and that, if she were going to do any artwork in 35mm, she would use the 40mm Zuiko. We talked about the focal length for a while, but all I remember now is Sally saying that 40mm is "about right." That’s what started my interest in 40mms.

A few years later, looking for a "Leica with AE," I became aware of the Minolta CLE. It, too, had a 40mm normal lens – the Minolta 40mm ƒ/2 M-Rokkor. This turned out to be one of the best lenses I’ve ever used, fantastically sharp and smooth. My friend John Kennerdell, a photographer who lived in Bangkok at the time, told me that one Japanese connoisseur had dubbed it "the Water Lens." Curiously, it was one of the only lenses I’ve ever used that consistently drew positive comments about sharpness and clarity from non-photographers looking at my prints.

The latest addition to the short list is of course the Cosina/Voigtländer 40mm ƒ/1.4 Nokton, the first lens of its specification ever. It can be extremely sharp and contrasty when shown off at its best, and for a fast lens it has pretty good bokeh – a term that just refers to the appearance of the out-of-d.o.f. blur, whatever you may have read elsewhere!

Ben and Amy at the Counter, shot by Richard Sintchak with the 40mm Nokton S.C. (single-coated version)

I’ve found as a general rule that bokeh gets progressively more problematic: a) the larger the aperture, b) the closer the focus, c) the more distant the background, and d) the more contrasty the background. With any lens, we discover our own limits for what we’ll tolerate, and then shoot within those limits. For instance, with the 4th-version 35mm Summicron (pre-ASPH), I would never shoot wide open because the contrast was just too low for me (and sometimes the vignetting was objectionable, too). Overall, the more shots I’ve seen taken with the 40mm Nokton Classic, the more serviceable it seems. If you keep the plane of foucs reasonably distant and watch the background, even f/1.4 seems usable in point of vignetting, contrast, and center sharpness. Not a bad result at all for a small, fast lens. 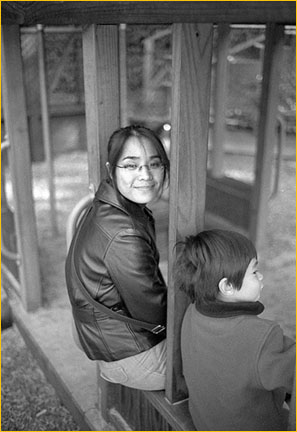 Taken by Richard Sintchak with a Voigtländer Bessa R3A and 40mm Nokton S.C. on Tri-X.

Of course, no focal length is magic. Many photographers have different favorites. As long as they’re in the right hands, most common focal lengths can be used to make pictures that are excellent. So why 40mm? I’d say that the 40mm focal length is special precisely because it’s not special. Purely by convention, 50mm has long been considered the "normal" focal length for 35mm photography. Early WA’s were 35mm. Many photographers have made a choice between these two focal lengths as their own "normals." Many, like myself, have switched back and forth. The truth is, neither of these common focal lengths are quite "normal" for 35mm. 50mm is just a touch long, and 35mm is just a touch wide. Using the diagonal of the format as the standard, the true normal would be about 42mm (curiously, that’s about exactly a 28mm lens on an APS-C digital sensor). The various oddball "intermediate" focal lengths (38mm, 40mm, 43mm, and 45mm), although much less common, are actually closer to a true normal for the format.

Why would you want a lens to be "normal," anyway? So what’s so special about not being special? Glad you asked.

These days, we’re witnessing an intense interest in digital cameras in online forums. The nexus of this interest, however, is almost always technological, not visual. People want to know about pixel count, bit depth, noise at high ISOs, turn-on time, how many microns each photosite measures, what the buffer speed is, and so forth. This is actually quite typical. Photography has always had a technological side that is endlessly fascinating, and this is as true of digital as it is of traditional photography. What it means is that we photographers often approach photography as if its main interest were technical and technological. We don’t look so much at the visual content and effects of pictures, as we do their technical properties.

But many of the greatest photographers have "gotten past" the technical aspect of the craft. What I mean by that is that they choose a particular mode of operation, a way of working, and then they concentrate on the visual aspect of the pictures. Think of it. The late Henri Cartier-Bresson was indelibly associated with Leicas and the 50mm lens. Edward Weston made 8×10 contact prints. Eugene Atget and August Sander used more or less the same techniques for most of their important work. Nicholas Nixon and Shelby Lee Adams use large-format cameras with wide-angle lenses to photograph people. We associate Ernst Haas with 35mm Kodachrome, Eliot Porter with the dye transfer process. The point is, these photographers and many other like them don’t _want_ you to look at their pictures from a technical perspective. They’ve chosen the technical properties they like, granted, but they understand that those technical properties are not what make any particular picture good or not-so-good. You don’t look at a Cartier-Bresson picture and say, "Gee, look at how sharp that Leica 50mm lens is." You don’t look at a Weston and say, "Wow, 8×10 gives you such smooth tonality." The reason you don’t is that all Cartier-Bressons were taken with sharp 50s, and all Westons have smooth tonality. It’s not that these photographs don’t have technical properties, it’s that the artists want you to get past that, and look at the subject, the visual content, and the meaning of their photographs. 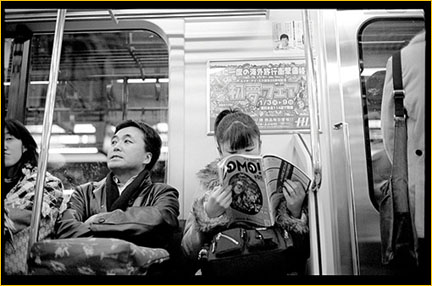 A photograph by Alan Soon taken with the 40mm Nokton S.C. on a Leica M3 with Ilford XP2 film.

Focal lengths, too, impart specialized properties to pictures. You can zoom way in on something that’s far off, get so close to something that it looks almost abstract, or use a lens so wide that distortion is part of the "visual toolkit" you’re working with. And there’s nothing at all wrong with any of this! I’m not arguing against technical experimentation or wildly unusual focal lengths. What I’m saying is that if you’re concerned with extremist focal lengths, then your pictures will display certain properties associated with those focal lengths, and people are more likely to see those properties when they come to your pictures. I came across a delightful set of pictures recently by a young Japanese photographer who had bought himself a Bessa R2 and a 15mm Voigtländer lens. He was clearly having an enormous amount of fun experimenting with what the lens could do – you could just sense his enthusiasm and playfulness. But of course many of the pictures deliberately exhibited the properties not so much of the real world as seen by thephotographer, but of the real world as seen by thelens.

Moderate focal lengths, to my eye at least, serve in part to remove this sort of "specialness" from pictures. They make the angle-of-view and the type of distortion nondescript. And what this allows, in turn, is a concentration on the visual content of pictures. That’s what’s so special about not being special.

So is a 40mm "better" than a 35mm or a 50mm, or any other focal length you like? Of course not. Good artists can "normalize" any way (or many ways) of seeing. Ernst Haas used the very slow (ASA 10) speed of early Kodachrome to explore motion blur. Ralph Gibson uses high contrast to make pictures less atmospheric and more graphic. But if you care to remove obvious focal-length effects from your pictures, and "get past" those properties, so that you and the viewers of your pictures concentrate on what you’re looking at, how you see as opposed to how the lens sees, then the 40mm true normal may be just right.

My thanks to Stephen Gandy, Richard Sintchak, and Alan Soon.

Lunar Eclipse at Sunset. Death Valley – 2003TheLuminous Landscapeis offering a series of lectures and seminars by some of the world's leading photographic educators. Visiting