This accessory will be featured inIssue #4ofThe Video Journaldue out in April, 2002.

This has everything to do with gravity. With a ballhead the lens / camera combination rests on a point‚ the ball. If the camera is tilted upwards or downwards, such as when following a bird in flight, or even when simply panning to reposition, the whole assembly will tilt forward or back under its own weight. This is inherently unstable and can lead to a big expensive lens ending face-down in the dirt.

With a gimbal mount the entire weight ishungrather than balanced, and it consequently remains extremely stable. A 15lb camera / lens combination can be panned and tilted with a single finger, and because the horizontal and vertical axis are separate they can be locked independently.

I’ve been using the smallerWimberley Sidekickfor a couple of years with myCanon 300mm f/2.8L IS, and it has proven to be excellent. It’s convenient as well because it is simply an add-on to my existingArca-Swiss B1head. But, with a larger lens like myPentax 600mm f/4or anything similar, the full Wimberley is what’s needed. 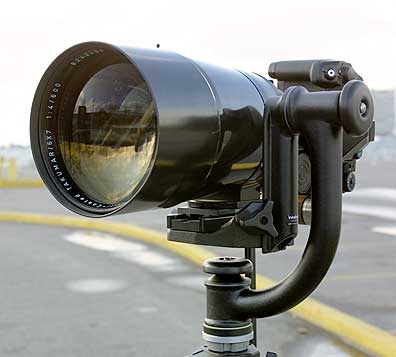 The Wimberley mount costs USD $465, and you’ll need to spend another $100 for anArca-Swisscompatible quick-release clamp assembly. Not inexpensive, but if you’ve just spent $5,000 to $10,000 for a long and heavy lens this additional investment to make it properly functional shouldn’t be a concern.

Wimberleyis a small family owned business. They make a high quality product and sell it at a fair price. I’ve now dealt with them a couple of times and on each occasion I’ve found them to be both friendly and to provide quick service.

The Wimberley has, to my knowledge, only one significant competitor, theKirk King Cobra. I have no experience with this mount, so I can’t comment on it other than to note that unlike the Wimberley it suspends the lens from the side, rather than the Wimberley design which allows the lens to sit on a platform. This made it unsuitable for my purposes, because thePentax 600doesn’t have a rotating tripod collar. Any lens without such a rotating mount will similarly not work with theKirk. At $440 the Kirk is somewhat less expensive than the Wimberley. This priceincludesthe quick release.

There is one other gimbal head that I’m aware of, theDPNP Action Head 2000fromReis. I’ve never seen one in use and know nothing else about it other than what’s on theReiswebsite. Like theKing Cobrait too is a side-mount design.  It sells for $472 including the quick release.

Finally, keep in mind that when you use the large Wimberley head you are dedicating the tripod to the use of large lenses. With the smallerWimberley Sidekickyou simply remove the arm and your ballhead is instantly returned to its normal use.