Alain Briot is one of the most successful landscape photographers working in the American Southwest today. His work is widely exhibited and collected. His monthly column for this web site, of which this is part, is calledBriot’s View. An extensive interview with Alain is included inIssue #1ofThe Luminous Landscape Video Journal.

Editor’s Note:Though we shot sunrise at the same location atWhite Sands, as Alain points out we all spread apart when we got there to avoid putting footprints into each others shots. A couple of weeks later, when Alain sent several of his images to me, it was the first that I had seen of what he’d been shooting. I immediately suggested that these would likely form the core of a very informative article.

Alain’s passion for light is clear both from his photographs as well as his prose.

It is pitch black outside and we are waiting in our truck for the Park Ranger to open the gate toWhite Sands National Monumentso we can hurry in and hopefully find a great location for photographing the white dunes at sunrise. The afternoon before we had paid $50 for the privilege of being here at this time, since normally the gates are closed until 7 am.

It is still pitch-black but we are now driving towards an unknown location in the dunes. The ranger, right on time, had opened the gate and let us in. Several places look promising but we move on, not sure how far to go and at the same time aware that time is precious. The sun will rise at 7:00 am no matter whether we are ready or not.

We are now hiking in the dunes, headlamps still on as first-light approaches, hoping that our steps will take us to the ideal location. We had stopped impulsively on the road, partly because it looked promising and partly because we had to stop somewhere. The good news is that this areadoeslook promising. There is vegetation‚ grasses and yuccas mostly‚ which is one of the elements I am looking for. The other elements I don’t have to worry too much about. I want sand, and there’s no shortage of it. I want mountains in the background and they right there. I want warm sunrise light, and the sky is filled with stars indicating that no clouds will obstruct the sun when it rises in about 40 minutes.

We have split our group‚ consisting of me,Michael Reichmann,Chris SandersonandSteve Kossack ‚ and are now hiking in different directions. We took this decision to avoid walking into each others potential photographs; that is, disturbing the sand with footprints only to realize later that this specific patch of sand would have made a great foreground.

After walking past several potential locations I have reached the top of a dune on which grows a single young Yucca. The shape of this Yucca intrigues me. The sand patterns are very nice and behind it the dunes and the mountains are clearly visible. I could move on and gamble on finding something better but I don’t want to take the chance. I put down myLoweProbackpack, set up myLinhoff Master Technica 4×5and get to work.

I have just exposed my first sheet of Provia 4×5. The sun is still 15 minutes from rising but the glow of dawn is upon the dunes suffusing the air with soft purple light.

The light intensity continues to increase as the sun gets closer and closer to breaking over the horizon. The sand is now pink while the western sky exhibits a gradual transition from pink to blue. In front of me I can see mauve and purples in areas facing away from where the sun will rise. 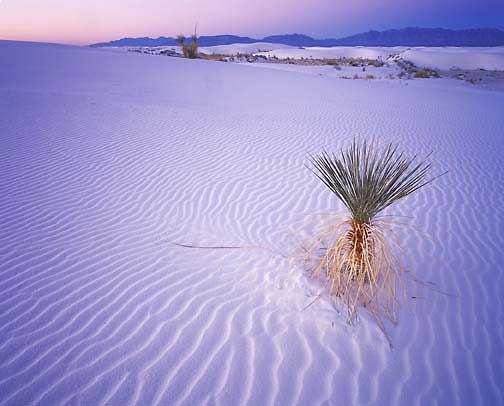 The sun just appeared, clearing a distant mountain range. I am on a west-facing dune which will stay in the shade a few minutes longer. The light intensity increases as I am working, and I have to meter the scene constantly so as to not overexpose my film.

The sun rising in the eastern sky has reached the small Yucca in front of me. Behind it the dunes are still in the shade. I wait patiently until the Yucca is entirely lit and get back to work capturing on film this new natural event. The sky is now a soft pink and the distant dunes are purple. The Yucca is bathed in warm direct light while the dune around it, lit only by diffused light, is soft blue. 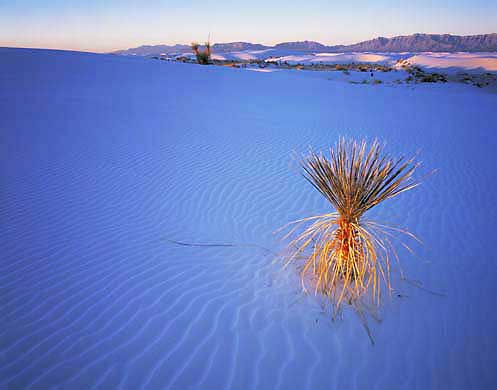 The sun just crested over the dunes sending rays of light upon the sand ripples behind me and giving them a three dimensional quality. I consider moving my camera to take advantage of the new opportunities offered by this change in lighting but realize that doing so would prevent me from capturing what is happening right now. I leave my set up as it is‚75mm Super Angulonwith my tripod low to the ground‚ and continue to expose holder after holder.

The sun, following its upward motion, is now illuminating the sand ripples right in front of the small Yucca, metaphorically creating a path of light leading the eye toward the plant, the dunes behind it, and the mountains in the background. The dunes are now dark blue while the Yucca continues to glow in their midst. 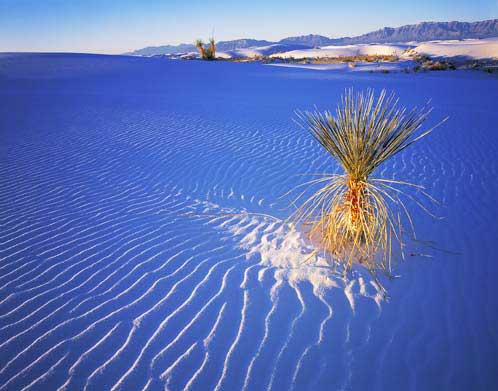 The sand ripples, now almost completely illuminated by the sun, are creating a dazzling effect. The background dunes are already almost pure white while the sky is now light blue. I continue to expose as direct sunlight fills more and more of the scene in front of me. 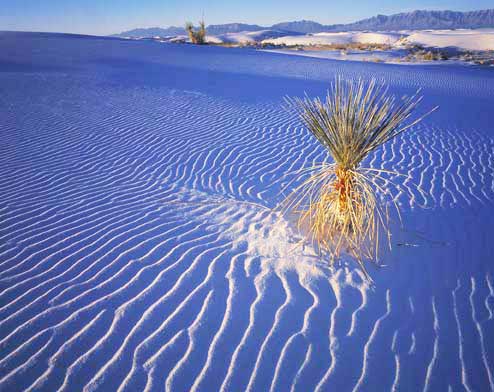 It now feels like noon here, there being so much more light than when I arrived, and yet I have been here for less than an hour. The sun is illuminating the dunes almost entirely, and everywhere I look I can see sand ripples stretching towards the horizon. I move my camera slightly so as to center the Yucca in the middle of the frame and emphasize the waves of sand. The Yucca now starts to throw a shadow, completing the composition. 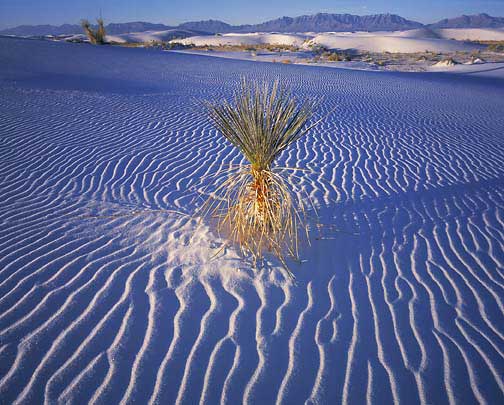 After packing my gear I start hiking back towards the road, the truck, and breakfast back in Alamogordo. I have exposed 40 double film holders in less than one hour‚ all the 4×5 films I brought with me, and I never changed my composition, except slightly for the last image!

As I walk back I realize that my photographs can be used to illustrate how a scene is transformed by light alone. It has been a beautiful morning.