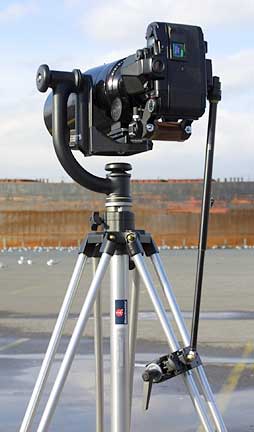 A large rigid tripod and agimbal moun tare de rigueur. But once lenses reach 500mm to 600mm in focal length even the best tripod / mount systems start to have problems with inadvertent vibration. Canon’s Image Stabilization technology is a boon, but any other brand or type of long lens requires a different solution.

Some suggest the use of two tripods one for the lens and one for the camera. In my opinion this is a non-starter. It sounds OK in theory but if you’ve ever tried it you’ll throw up your hands in frustration within seconds. This is bad advice. Ignore it.

There’s a much simpler yet equally effective solution, the Manfrotto #359 Long-Lens Camera Support. This is an inexpensive telescoping arm with a small ballhead at one end and a C-Clamp at the other. With the lens attached to the gimbal mount on the tripod, you then attach the small ballhead at one end of the arm directly to the camera. The C-Clamp at the other end of the arm attaches to one of the tripod legs. 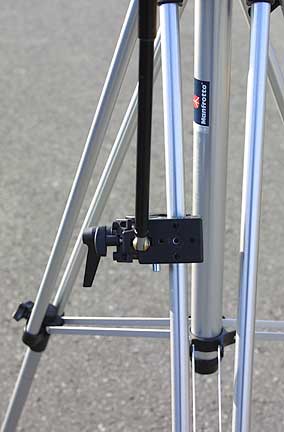 Voila. Essentially the equivalent of two tripods in terms of stability, yet a system that hardly restricts motion and versatility. The telescoping aspect of the arm along with the swiveling ability ballhead allows you to swing the lens though a wide arc of motion, horizontally and vertically with the arm attached. When your shot is framed just tighten two knobs on the arm and the system has full rigidity.

With two separate points of attachment for the combined body / lens combination, rigidity is much enhanced, and there is no danger of a pendulum effect from having a heavy body hanging off the end of a large lens.(Assuming that you use Arca-style quick release plates be sure to buy a Kirk QR1 mount so that the ballhead can attach and detach easily to your camera’s plate).

The arm costs less than USD $50. Few dealers stock it, or even know about it, but it can be easily ordered. It does take a bit of extra effort to use but if you have a large non-Image Stabilized lens like the Pentax 600mm f/4, this little gadget can save the day.