Alain Briot lives and works in the heart of the Southwestern luminous landscape. He makes his home inChinle, Arizonaand his living from print sales.Monument Valley,Canyon de Chellyand theGrand Canyonare his backyard, and he explores them in depth with an artist’s eye.

Born and educated in France, Alain has made the U.S. his home since 1986. He has studied photography in France, received his Masters degree fromNorthern Arizona University, and is currently working on his PhD.

Alain may be contacted directely by clickinghere, or join the Guest Photographer Discussion on ourForum.  You should also visit hispersonal websitefor a look at more of this Master Photographer’s work.

Alain is also an expert on photographing Rock Art.  An essayby him on this subject is found on my Rock Art page.

Alain authored four books on photography. All are available as printed books here and as ebooks here.

Some of Alain’s photographs: 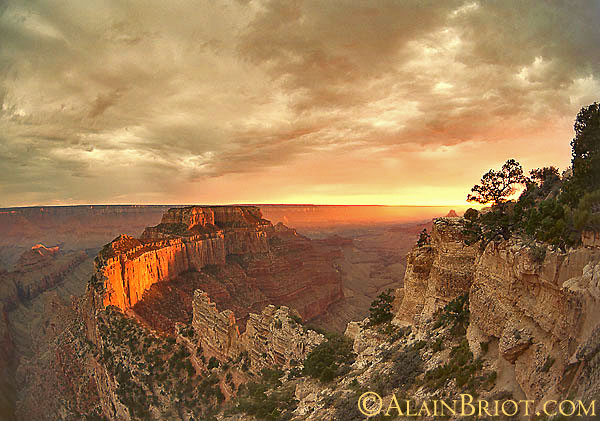 This image was taken fromCape Royaloverlook on the North Rim of theGrand Canyon. The sky was overcast on this late summer evening and I decided to wait until the last minute hoping for a ray of sunlight. I used a fish eye lens on my Olympus 35mm camera, the only lens I had which could frame the entirety of the huge expanse of view offered at that location. Just before it set the sun came out for perhaps a minute or less, affording me the possibility to take 3 or 4 frames.

This one represents the peak of the sunlight effect on the giant rock formation known asVulcan’s Throne. The light lasted such as short time that, being too involved in shooting, I couldn’t say for sure If I captured it or not. My wife is the one who reassured me. I was too caught up in the excitement to know for sure! This image has since become a best seller, quite a few people asking if it shows the Green Flash, the visual effect one can witness at sunset when the sun emits a brief flash of green light before finally setting down. 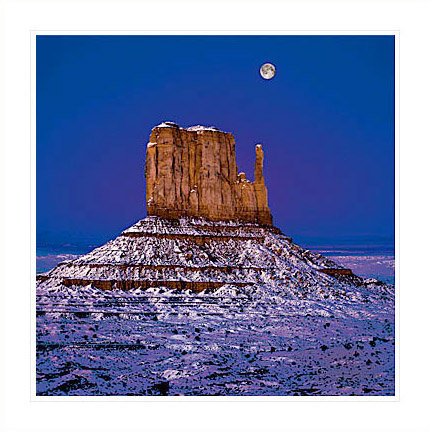 This photograph was taken in December, very close to Christmas. I was on Christmas vacation (I was going to college at the time) and was planning to go camp and photograph in the Coyote Buttes in Paria Canyon Wilderness Area between Page and Kanab, AZ-UT border. On the way there, coming from Flagstaff, I was caught in a snow storm, and not having 4WD at the time I knew I could not go through the dirt road leading to the coyote buttes (no permit was required back then but one still had to be able to navigate the dirt road).

I thus looked for a place which I could go to which would be both scenic in the snow and paved so I wouldn’t get struck.Monument Valleyseemed the only and best possibility. I made it there around midnight with the valley filled with dense fog and with snow coming down. I ended up spending three days there, camping in my truck in the parking lot on the main overlook as the campground was closed. There were no tour organizer trailers at the overlook parking lot then and nobody came to ask me anything. I would go to the visitor center each morning and get warm coffee and beside that I kept to myself. A couple of dogs adopted me and as I had plenty of food and warm equipment I just waited out the storm. At times the weather would clear up for a few seconds but never enough to give me time to photograph. I took hikes in the valley, starting on parking lot, and got lost in the fog a couple of times.

On the third day the fog lifted but it was too late in the day to have good light. The next day I went into the Valley with a guide, being his only customer, and then waited the rest of the day for the light. Sunset was clear but nothing special and after shooting I packed up my equipment, put it back in the car, and sat behind the wheel. I had the car facing the valley and it’s only when I was in the car that I saw the moon rise. It had started rising behind the left Mitten, which hid the moon until it got above it. I immediately unpacked everything and started shooting again with theHasselbladand the 150mm lens. For a few minutes I had the moon just above the left mitten with just enough sunlight glow left in the West to make the rock glow while the sky got dark blue. Then it was over as light faded away and darkness crept in. I drove away that night headed forGrand Gulchwere I spent the next three days hiking and snow camping. 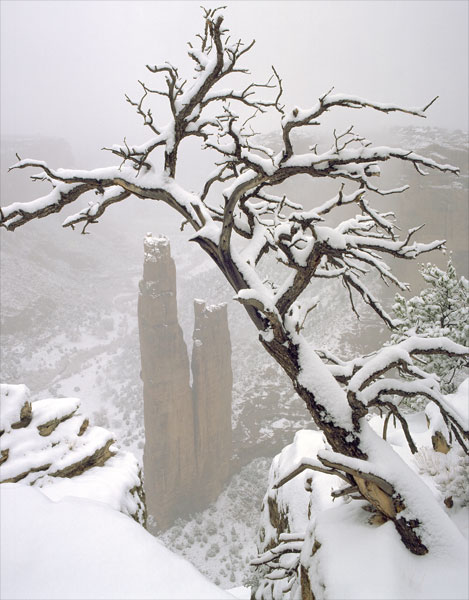 Snowstorm over Spider Rock, Canyon de ChellyThis photograph was taken with a Hasselblad SWC camera with the attached 38mm Biogon lens, during a January snowstorm. Living in Chinle affords me privileged access to Canyon de Chelly and in the winter I watch-out for snowstorms as they bring uncommon and photogenic weather conditions with them.

On that day a snowstorm developed during the daytime, not a common situations as many take place at night . We thus headed for Spider Rock overlook in very wet snow conditions, with the truck in 4WD on the pavement as the roads are not cleared and thus quite dangerous. At Spider Rock we worked under wet snow and were drenched quite rapidly. Ironically it was this wet snow which got the shot, since the snow struck heavily to the branches of the dead tree. I had to use the wide angle camera to get the frame I wanted. I tried two different compositions, one square, and one horizontal using a fish eye lens on my 35mm Olympus. The square version is my favorite and has become a best seller. Although I offer both the square and horizontal versions, as many people like both, and will buy a copy of each! 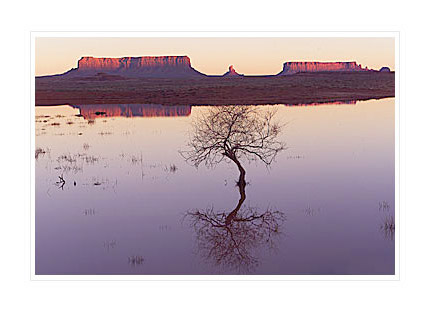 This photograph was taken with theKodak DCS 560digital camera which is based on theCanon EOS 1nwith a 6 million pixel digital back. The camera stores images on a removable hard drive for a total of 50 images per 250 MB hard drive.

I was testing the camera for Kodak and had 2 hard discs, meaning I could store 100 images total before I had to download them to a computer. On that day I was away from home having driven toMonument Valleyfor sunrise, and having shot all day both hard drives were nearly filled up. I was on my way back when I saw this scene just as the sun was nearly done setting. The pool of water is a temporary pool which had been created by recent rains (the photo was taken in November 98). I looked for a high point to shoot from so I could catch the reflections of the buttes in the water (the location is half way betweenEagle RockandTrain Rock, not far from theGouldings Lodge). I saw an earth dam and, having no time to loose, drove my 4WD Nissan truck onto it. I then climbed on the roof of the truck and had time to take a few frames before the sun actually set.

I tried both vertical and horizontal compositions but it was the horizontal image which was the strongest. I did not take more than 5 frames, it was that close in terms of timing. A few minutes of shooting and the light was gone from the mesa in the background. I called itSurreal Landscapebecause that’s the feeling I got when I photographed this scene. I felt as if the leafless tree in the pool was “floating” above the water and that the two buttes in the background were too perfectly symmetrical to be actually real.

The results from my DCS 560 test were published inElectronic Publishing Magazine,February 99, with one of my photographs on the cover (Hogan in Monument Valley) and several more inside, as well as a text on myself and my impressions of the camera. I had the camera on loan for 2 weeks and took a total of 2000 images over that period of time. The lens used was a Canon 28-70 mm zoom. This photograph was probably done with the widest zoom setting. However, because the CCD is smaller than 35mm film, it is closer to a 35mm setting than to a 28mm lens. 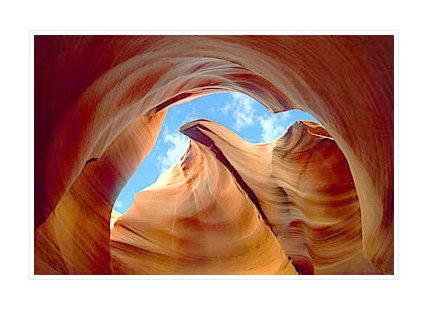 I started photographingAntelope Canyonin 1986 when it was still relatively unknown and when one had to find the place on ones own. Now there are signs along the road, and tour guides, and the experience is quite different, although the place is just as magical. It took me years before I figured out how to photograph Antelope, what worked and what doesn’t work, and what the place means to me.

This image was done after a three year absence from the Southwest, during a spring visit to the slot canyons. It was taken in March or April. I have never been to Antelope on a bad day for photography. There is always some opportunity for a good photograph. I have heard many people tell me which time of year is the best time but I don’t believe there is such as thing as the perfect time for any location. Certainly there are good times for certain types of photographs. But if one goes to a location with an opportunistic approach there are always wonderful things to do with it. Just think of it this way; What if this was the only and first time you were there? You would most likely find it wonderful and be motivated to take your best shots. This is how I approach most of my photography. I have become very opportunistic over the years, and although I plan to be there at particular times which I believe to offer unique opportunities, I also want to see what I can do when the timing and the light are not what I expect them to be.

On that day the light was very subdued and the colors quite muted compared to some other instances when the canyon seemed to be on fire. I found this to be a great opportunity to take photos which required low contrast to work well, such as this one. To this day it is my only successful photo of Antelope in which the sky has color. I do like it, as the shape of the rock and that of the clouds remind me of a bird.

Another portfolio by Alain, this time panoramic photographs taken with aFuji GX617camera, are foundhere.

An essay by Alain on why he uses theFuji GX617panoramic format camera can be foundhere.

A new portfolio by Alain from a January trip toSouthern Utahis online. 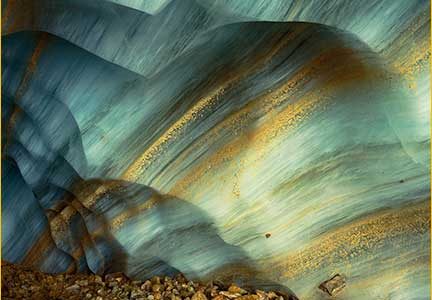 Dawn, Lake Louise, Banff National Park, Canada 1995 If you ask a photographer what kind of images he or she makes, the answer most commonly