This page contains images taken during myJanuary, 2009 Antarctic Photographic Expedition. New photographs along with relevant commentary will be posted here on an on-going basis during January and February, and additions will be announced on What’s New.

The most recently posted images will appear at the top of the page as they are added. 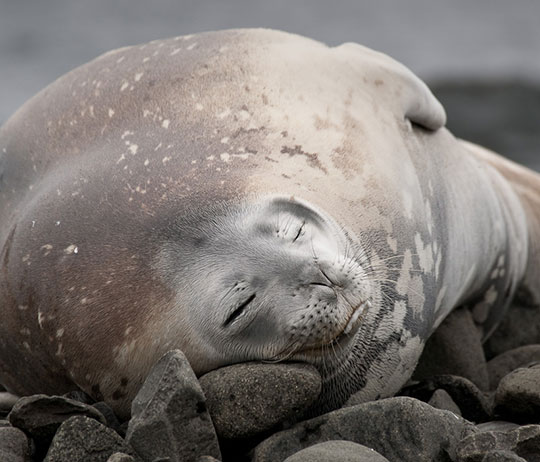 It’s always tempting to anthropomorphize animals, especially the cute ones. This seal, snoozing on a most uncomfortable bed of rocks at mid-day, doesn’t seem to have care in the world. 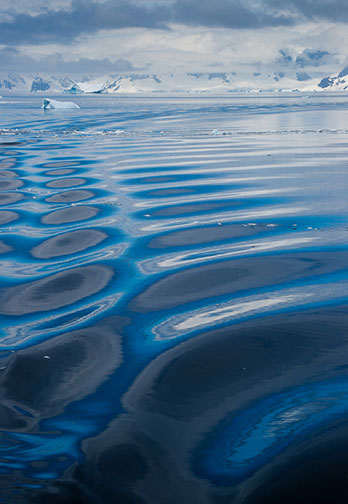 Water, sky, and ice – all the ingredients needed. Just mix and wait patiently.

Standing on the deck of a ship underway always produces fascinating ripples and patterns in the water. When the water and the sky are just the right colour, and reflections are at just the perfect angle, sometimes something sweet happens. 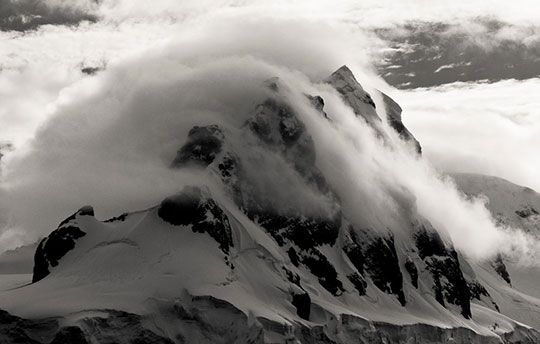 Everything is on such a monumental scale in Antarctica that it becomes difficult to convey in photographs unless very large prints are made. This is similar to what one finds in other mountainous landscapes elsewhere in the world, and one of the reasons that photographers have long shot this type of subject with large format sheet film.

This isn’t possible hand-held, or even tripod mounted from the deck of a moving ship. But fortunately, today, we don’t need 4X5″ or 8X10″ view cameras to be able to produce prints on a monumental scale that have the fine details and micro-contrasts that are the hallmarks of such images.

Shooting with the new 60 Megapixel Phase One P65+ allowed me to easily produce exhibition prints of 30X40″ and larger, something that just a few years ago wouldn’t have been possible in this type of situation with this level of depth and clarity. 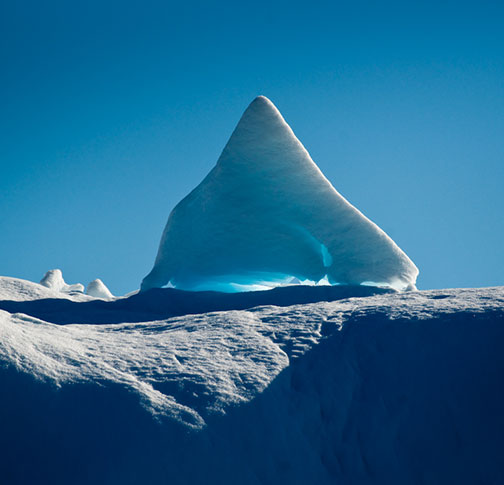 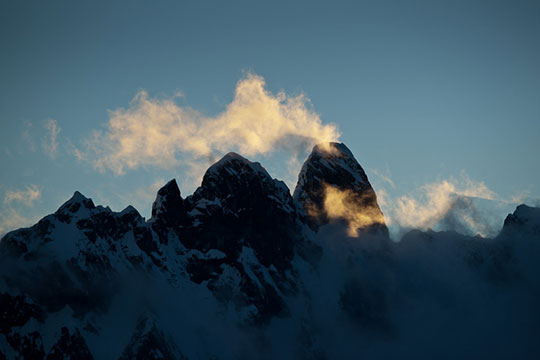 One of the things that I love about the three expeditions to Antarctica that I’ve done is the unexpected combinations of light, atmospherics and landscape that continually develop around one. This was taken as the ship maneuvered to a dawn anchorage. It was 4:40am, and staying in the cabin simply wasn’t an option, at least for me and a few other hardy souls, who with coffee and cameras in hand stood on the deck of the ship as we watched the sun illuminate clouds flowing across the nearby peaks. 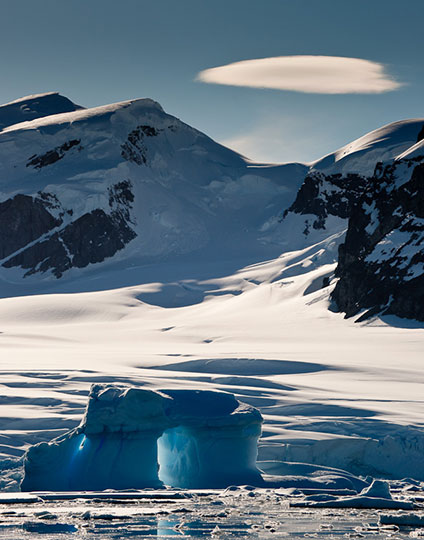 Few of my images have captured the bizarreness of the Antarctic landscape as well for me as this one. One of the problems there is that it’s all too easy to lose all sense of scale. The fact that this grounded iceberg arch is about four stories high and the mountain behind it is at least a couple of thousand feet, with a massive glacier running down its face, gets lost in a sea (no pun intended) of unfamiliar scale and mass.

We were at the end of a zodiac cruise and heading back toward the ship. I’d had my eye on the arch for some time, but it was always at a distance, and we didn’t have time to get closer and investigate. But as we passed I saw the alignment with the saddle on the mountain range and the forming lenticular cloud, and made this exposure. 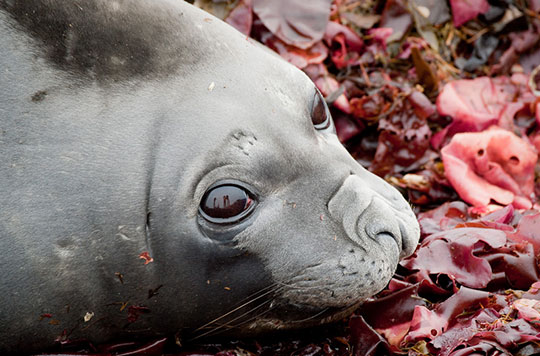 A few of us had wandered down a long spit of land, away from the main seal and penguin colony (and its smell). This seal was found by herself laying in a bed of red kelp, reminding me, with her big eyes, of a model reclining an a bed of flowers. Seth Resnick, Chris Sanderson and I were standing side by side on a small rise, and almost simultaneously saw our reflections in her eye. It takes a large print to really appreciate the humour of this image. 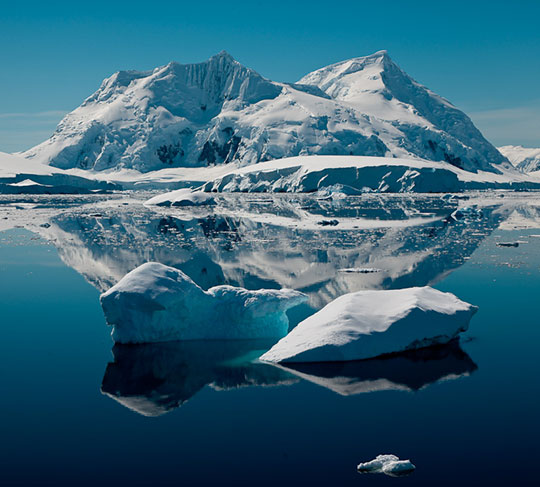 Our first two days at the South Shetland Islands on our way to the Antarctic Peninsula were overcast and drizzly. There are no weather forecasts in Antarctica but a look at the satellite maps indicated that our best bet was to bag the Shetlands and head as far south as quickly as possible. There was a risk though. It would mean heading into an area south of the Antarctic Circle where few ships venture. We would then be able to start sailing northward, but only if a narrow channel known as the Gullet had passable ice conditions. Otherwise it would mean days more of sailing in open sea to return north.

Few captains are willing to try the Gullet, and ours, with more than 100 Antarctic voyages, had only been though it once before, eight years prior. Nevertheless, the Captain, Expedition leader and I agreed that this was our best bet for good photography conditions.

Luck was with us. After 24 hours of sailing south we entered Marguerite Bay and the weather broke. It was glorious. Sailing through the Gullet was one of the most visually remarkable things that I have ever done. It was a place of transcendent beauty – glassy smooth black water, achingly blue skies, and crystalline white glaciers and snow clad mountains.

The image above,Crystal Sea, is just one of a number of frames taken with the P65+ during our three hour passage through the Gullet. I was thrilled to be able to photograph this unique location, one that has only been visited by a handful of human beings in all of history, with one of the most remarkable digital recording devices yet available. My review of the P65+ will appear on these pages later in February, and this image along with others will be on display as large prints in a show to be held at my Toronto gallery this spring. 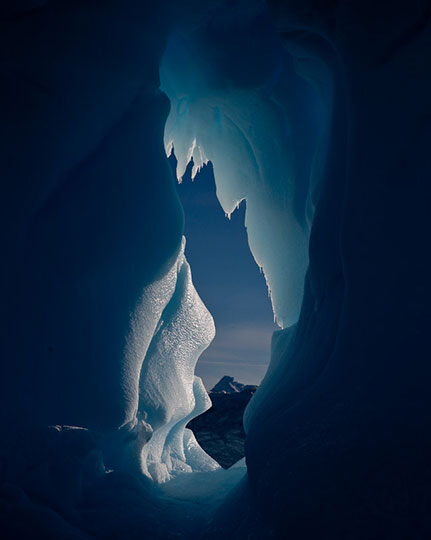 An expedition to Antarctica takes place onboard ship, on shore, and in Zodiacs – rubber boats equipped with outboard motors. These small craft are in many ways the most fun, because they provide the ability to get very close to icebergs, some of the most beautiful photographic subjects to be found anywhere.

The convoluted shapes and saturated colours are reminiscent of the slot canyons of the American southwest. Except for the blues, which are unique.

Whenever I exhibit prints of bergs and glaciers shot in Antarctica viewers ask if I have pumped the saturation on the blues, and –why the hell are icebergs so blue anyhow? No one on our ship, including the expedition staff, had the right answer, though there was lots of learned speculation.

On our return my friend Mark Dubovoy, an excellent photographer and author, not to mention a nuclear physicist, did some research and we now have the answer in his exclusive essay for this site. 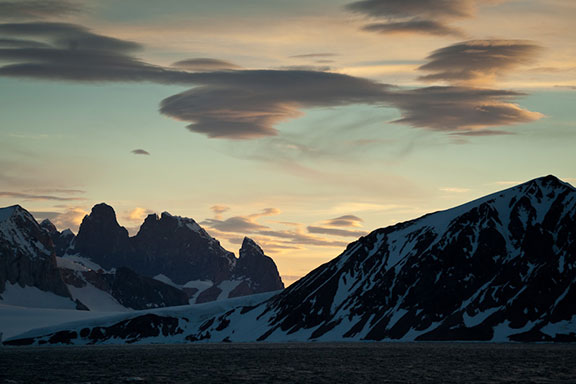 South of the Antarctic Circle in mid-January the sun never sets. Sailing out of Marguerite Bay shortly after midnight those of us not yet in bed were treated to a sumptuous banquet of orange tinged clouds and blue mountain and ice vistas.

It is soul stirring landscapes such as this that some photographers live for, and on this particular evening Antarctica didn’t disappoint. Standing on deck with a warm cup of coffee in one hand and a high resolution camera in the other while breathing the chill dry night air. Perfect bliss.

I’ve been fortunate to have viewed and photographed whales numerous times over the years, and even observed a couple of breaches, but never have been lucky enough to photograph a breach. They are almost impossible to anticipate both in terms of location and timing.

On January 17, 2009 as we were sailing through the Grandidier Channel toward a landing on Petermann Island the bridge announced a whale sighting and many of us rushed to the forward observation deck. I pointed my camera forward to the ship’s 12 o’clock position and waited. A few seconds later this breach occurred, and I fired a short burst, of which this is the first frame. An unforgettable moment in an other-worldly location.