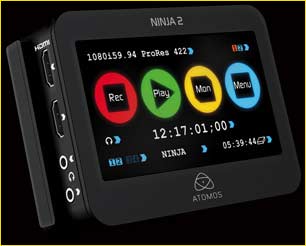 An increasing number of the more pro-oriented video DSLRs as well as higher-end camcorders provide live HDMI output when shooting video. Originally the purpose of this connector was to allow attaching a TV monitor so that the cinematographer and crew could easily see what was being shot. The HDMI connector from a camera is the same as what one uses to connect a Blu Ray player or amp to a high end TV or monitor. It passes a very high bandwidth uncompressed signal consisting of video as well as audiio.

Recently,someDSLR camera makers woke up, smelled the coffee, and realized that there was a demand for using HDMI to not just monitor a camera’s output but also record it. The signal on HDMI can be as high a 5 Gbps for 1080P (that’s billions of bits per second). Now compare this to the typical recording bandwidth of  24Mbps for a camcorder or video DSLR shooting with the AVCHD codec. 25 million vs. 5 billion.

Well, there’s no affordable recorder that can handle a 5Gbps video data-stream that I’m aware of, but there is one that can handle 1 Gbps (one billion bits per second) of uncompressed video and that’s theBlackmagic Hyperdeck Shuttle, which I reviewed in early 2012. The quick summary on it is that at some 10 GB per minute the data flow is just overwhelming. Only SSD drives are fast enough, and you could easily fill up a Terrabyte SSD drive or two per day of shooting, if you could afford them.  The unit is also very heavy!Once you add a cheeseboard style mounting plate you’d better have a solid shooting rig, because simply placing the Shuttle on a cold shoe mount isn’t going to fly. Not only won’t it fly, it’ll likely crash – physically.

Atomosis an Australian company who, with theNinja 2, is now on their second generation video field recorder. At 670g / 23.5oz including onboard batteries and a hard drive it is light enough to sit on top of a camcorder or DSLR, attached via a cold shoe or quarter/20 tripod thread and a short HDMI cable.

The front of the unit features a 5″ 800X480 colour touch-screen while the rear holds two slots for hot-swappable batteries. The left side has a slot for a standard 2.25″ inch hard drive, either spinning or SSD. These go into small plastic caddies, two of which are provided, and more are just a few dollars apiece. The whole thing, including charger, transfer a box for offloading files from the drive to your PC or Mac are included in a Pelican style carrying case. The only thing that isn’t included in the $995 retail price is a hard drive or SSD.

Speaking of which, high capacity 2.25″ hard drives are now commodity priced, though SSDs are still somewhat pricey. A 500Gb drive (about the price of a decent lunch for two) can record about 5 hours at the Ninja’s fastest data rate using ProRes 220mbps at 4:2:2. The reason that you might want to consider an SSD though is that being solid state they are less susceptible to vibration and drop damage. For outdoor work I chose to go with a 225Gb SSD, just to play it safe.

Firstly, there’s the issue of image quality. One would think that an uncompressed data rate of 1 Gigabit / second from the Hyperdeck, or 220 Mbps from the Ninja would produce stunning image quality, but in reality its not much better than that from the highly compressed recorded signal on your camera’s card, even AVCHD. Modern recording codecs are very efficient.

This is the dirty little secret of outboard recorders; at least the low to medium-end ones. They usually don’t offer that big (if at all) an improvement in image quality. Now, before you start forming a lynch mob let’s clarify a bit, and to do so will require some understanding of video jargon and specs.

The first question that you have to ask yourself if you want to record to an external video recorder such as the Ninja is –why? Below I’m going to list some of the other reasons why this may be desirable, but let’s be sure we understand what the image quality issues and limitations are.

The Ninja is capable of recording 10 bit 4:2:2. But, that doesn’t mean that your camera can output a signal at this level . Most video cameras (DSLRs and camcorders) below pro level record a 4:2:0 colour signal internally to their native media, and similarly most output a 4:2:0 signal to their HDMI output. You’ll have to dig a bit into the manufactruer’s specs, or online, to find out.

Just be aware that if your camera outputs an 8 bit 4:2:0 signal over HDMI then that’s what will be recorded. The recorder will put it in a 4:2:2 container, but it will still only be 4:2:0. Essentially this means that you are likely only to see an image quality improvement when using a Ninja 2 (or most any outboard recorder) if your camera can output 4:2:2 colour . Similarly, though the Ninja 2 can record a 10 bit signal, all video DLSRs and most lower end (below $5,000) camcorders both record internally and output an 8 bit signal via HDMI. The Ninja 2 will encode it in a 10 but codec, but the data will still only be 8 bit.

Frankly though, unless you are planning on doing heavy grading or chroma-key work, and your camera outputs a real 4:2:2 colour signal, it’s my experience and impression that using an external recorder to improve image quality from a 4:2:0 SIGNAL is an iffy proposition. I have yet to see one convincing real-world demo of such an advantage, yet alone from my own experiments. A true 10 bit signal also helps with refinement of tonal transitions during grading and keying. 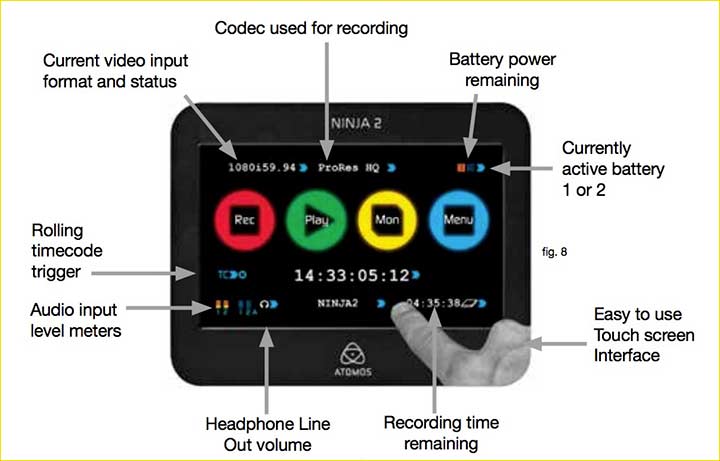 At the caution of a friend in the business I should point out that I am assuming that you are not editing AVCHD directly, no matter how fast your NLE or computer. Proper workflow is to either import ProRes 422 or better from an outboard recorder, or do so on card ingest. The quality of your eventual output will be the better for it.

But just because an external recorder like the Ninja 2 isn’t convincing in its ability to record a more robust signal for editing from most lower-end cameras, this doesn’t mean that they are a waste of money and effort. Far from it. Here are some solid reasons for wanting to add a Ninja 2 to your field or studio kit.

A few years ago cameras that shot AVCHD or other non-editing formats would have to transcode to ProRes or Avid DNxHD before editing. For anyone shooting in a hurry; news, actuality, or high volume work, this was a time consuming drag. But recently more powerful NLE software can directly work with AVCHD, or can do the transcoding in the background while we get on with the job of editing.

If you use a Ninja 2 and record directly to your favourite flavour of ProRes  HQ; (220Mbps), 422 (150Mbps) or LT (100Mbps) then you simply conect the drive and its transfer caddy to your computer and copy the files across, or even edit directly to the drive if you’re in a real hurry.

Many cameras allow shooting to the built-in card and simultaneously to an external device via HDMI. This means an in-the-field real-time back up. Critical for unrepeatable and once-in-a-lifetime events. (The Nikon D800/e requires that you remove any cards from the camera when attaching an HDMI recorder, so that backup plan is scratched. The Ninja 2 will be your sole recording.

Another advantage is long recording times. This comes in two flavours. First we have the ability to simply record hours and hours of continuous footage. With a 1T drive using Prores LT, 22 continuous hours can be shot. This could be valuable for surveillancee applications, or even in something like nature shooting when the occurrence of an event is indeterminate – the calving of a glacier, for instances. Just provide power and you can record for hours or days at a time, just erasing and reusing the drives that didn’t capture what you need. (Check that your particular camera model doen’t have some other time limitation on really long shooting periods. I’ve seen 12 or 13 hours listed in some cases, likely to avoid overheating).

Also, since the HDMI signal from the camera is output while the camera is in standby mode (not actually recording internally) none of the time limitations that sometimes apply (such as 30 minutes per shot in Europe, for tax reasons).

Not be to denied is having a nice large (5″) monitor to preview your shot with, rather than the smaller monitor or rear LCD that your camera has. This makes framing and composition that much more accurate and pleasant. Such a monitor is going to cost you a few hundred in any event, so this helps partially rationalize the cost of the Ninja 2.

Video DSLRs are mostly guilty of not providing the basic tools for video shooting. This includes adjustable zebras for exposure (fixed 100% flashing highlights are not really sufficient), focus peaking (more cameras have this, but the Ninja 2 gives this capability to all cameras), and False Colour to help you judge exposure distribution.

Is a Ninja 2 a “must have” for someone working with a video DSLR style camera or Prosumer camcorder? Maybe not. I’ve yet to be convinced that for most users (including me) that its a necessity from the point of view of improving IQ. But, all of its other advantages make it a real convenience in many situations, and even a necessity in others. And if your camera does output 4:2:2 colour, and you do green screen work or heavy grading, then you’ll likely see a small but real image quality advantage as well.

Oct 12, 2005 The following is an e-mail I received from Michael Tapes yesterday. It concerns a quite real design flaw in the new Custom