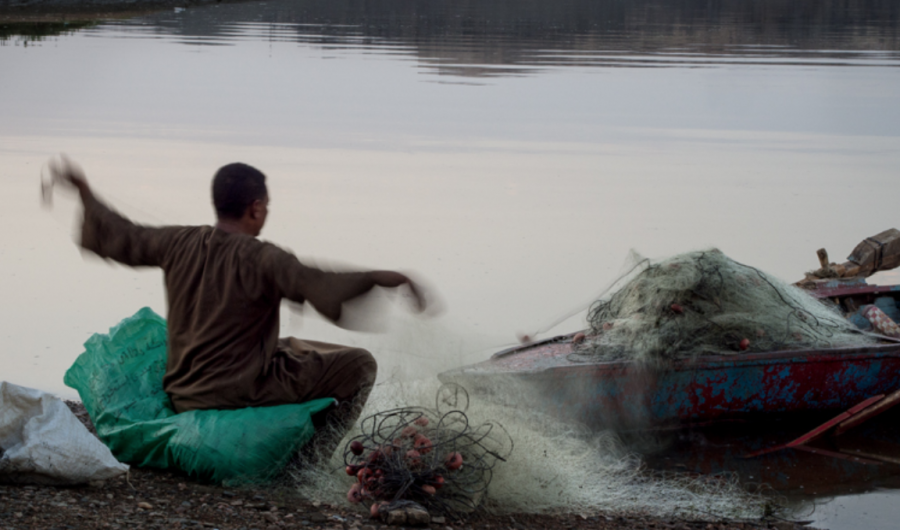 Egypt – Along the Nile (Rediscover) 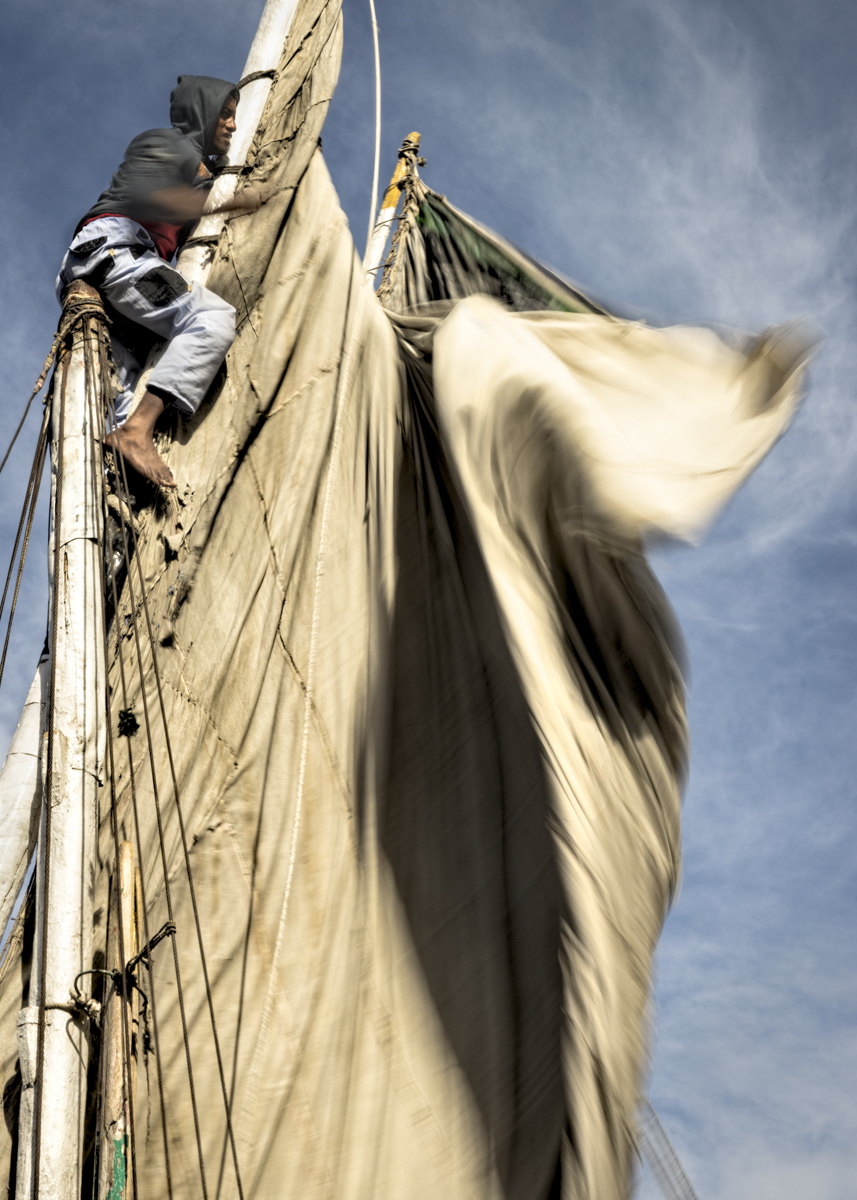 Recent violence and unsettled politics in Egypt has turned one of the world’s most important and well visited historical areas into a tourism ghost town. Given the singular quality of the antiquities, curiosity about the culture, and the Egyptians’ centuries of economic reliance on tourism, the tour busses and cruise ships will inevitably return. 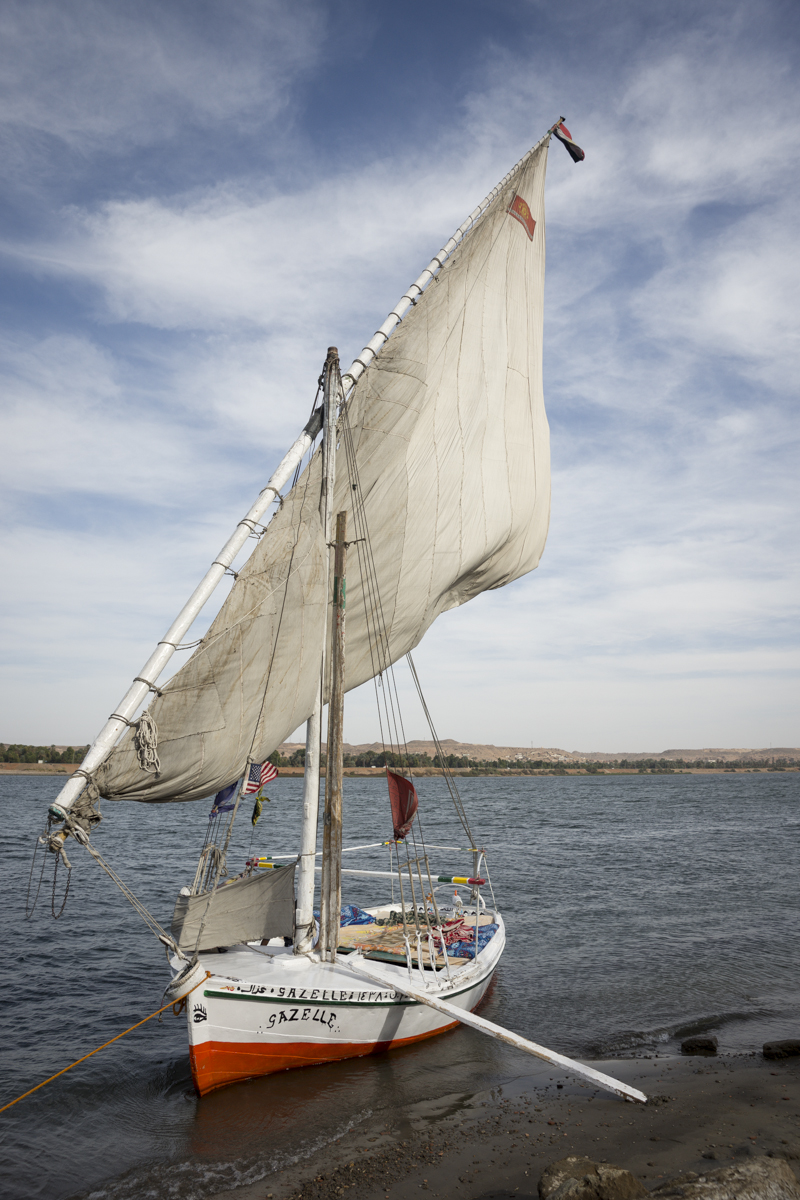 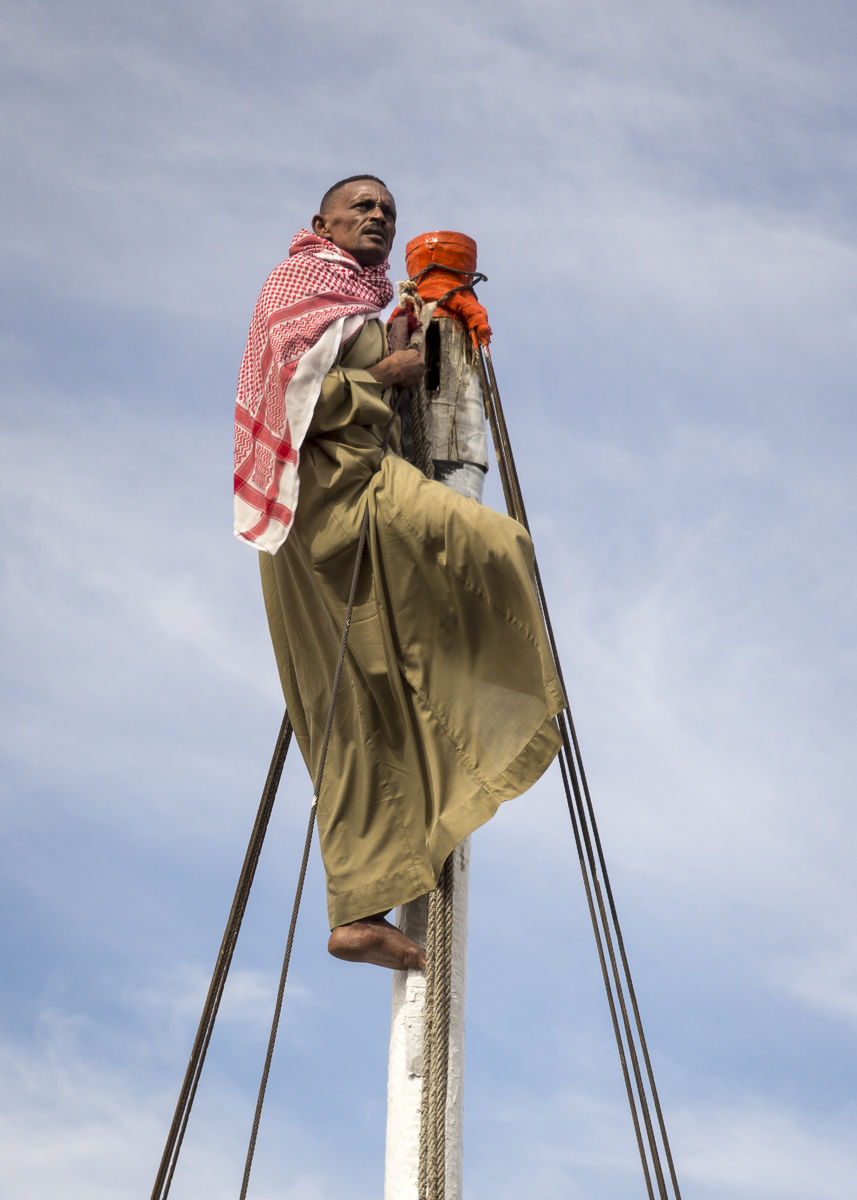 Before the recent unpleasantness, my friends Joshua Maricich and Will Raynolds spent a year sailing the length of the Egyptian Nile, from Aswan to Alexandria.  They made their journey in a feluca, the kind of small lateen-rigged wooden sailboat that has been in use on the Upper Nile for centuries  As they were finishing a book about their adventures, On Winds of Change, they asked me if I wanted to photograph the landscape and some of their book’s cast of characters, so I jumped at the chance to see Egypt through their eyes. 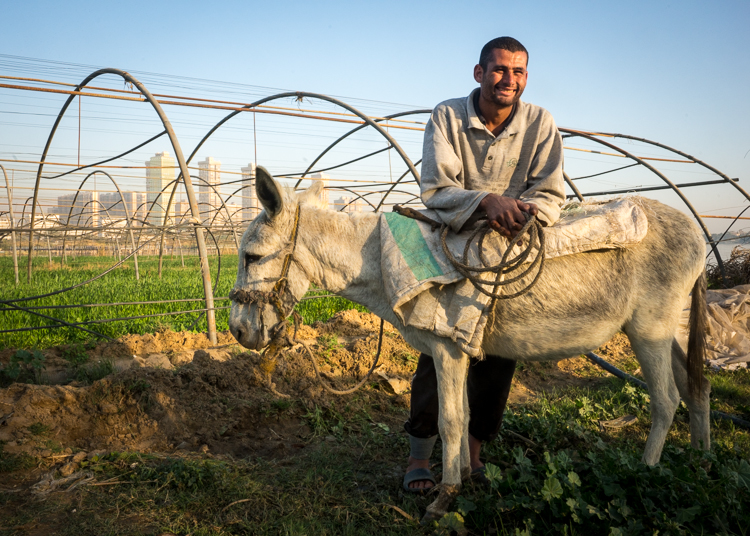 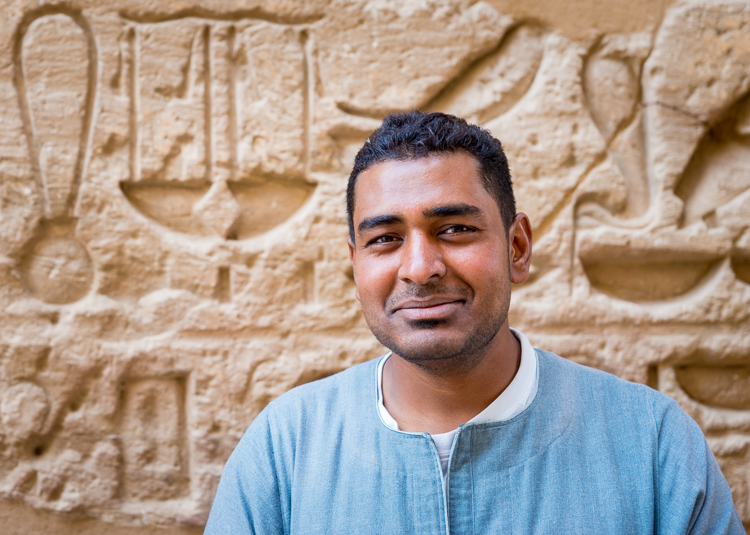 Egyptian historical sites usually feature the recorded deeds of the rich and powerful.  There is little sense of connection to current Egyptian culture.  But spending time along the Nile, brings a sense for how life has been lived for much longer than is depicted in the stone record.  The sailboats, villages and farms provide a window into a lifestyle that has remained remarkably unchanged for millennia. 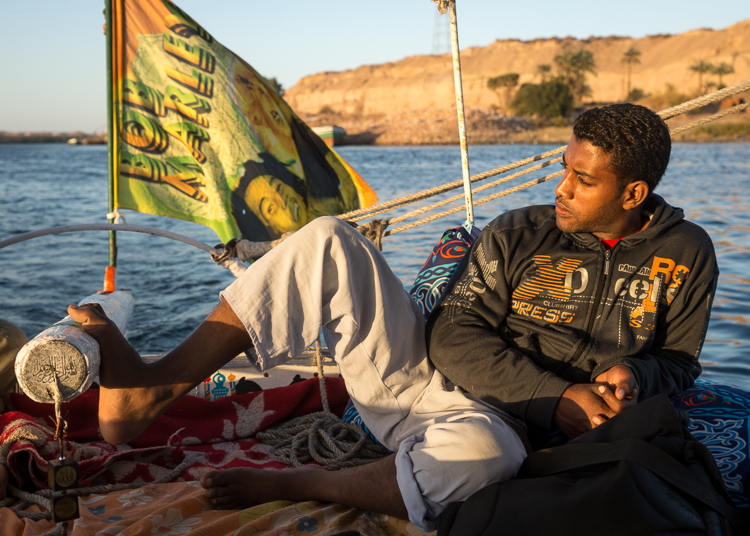 Transporting people and cargo by sail is a proud profession in Egypt, usually passed on from father to son.  The captain of a feluca can read the gentle winds of the Nile, and navigates the currents and obstacles of his section of the river without charts.  In sharp contrast to the noise and hustle on land, life on a feluca moves at a pace consistent with the Bob Marley tunes that became the background soundtrack on the water a few years ago.  (For some reason, Jimmy Cliff and Peter Tosh didn’t make the journey) 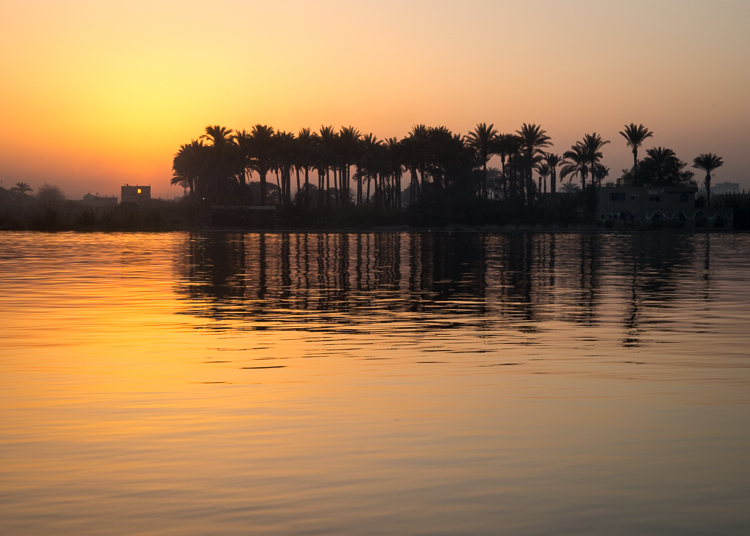 Sunset Through the Window Near Cairo

I encountered moments of great natural beauty along the Nile.  Midday light is harsh, but softens nicely in the morning and evening (the smog from Cairo makes for especially dramatic sunsets at Giza.)  There is little unused shoreline, however, so the opportunities for traditional landscape photography were scarce.  The most compelling reason to photograph in Egypt is the culture.  Arab culture dominates, and European influence in the north and Nubian and Sudanese influence in the south make it even more interesting. 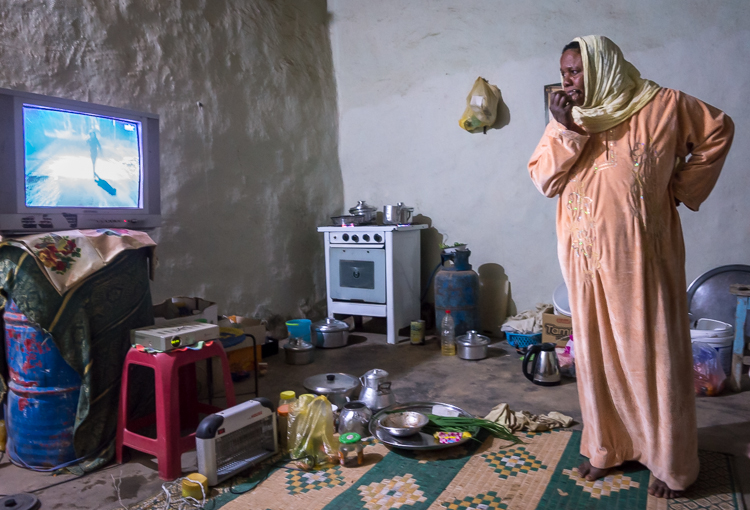 Men and children are not particularly shy about being photographed, but if you are somewhere tourists frequent, you should count on being asked for “baksheesh”, something between a tip and a bribe.  Most women are reluctant subjects, and will certainly not be encouraged by promises that thousands of people will see their image in your next exhibit.

Movement along the Nile 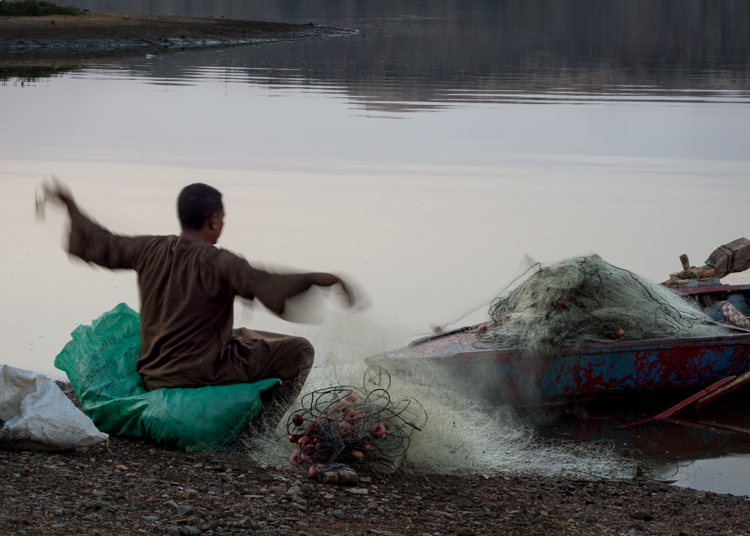 Tending Nets Along the Nile Near El Shallal 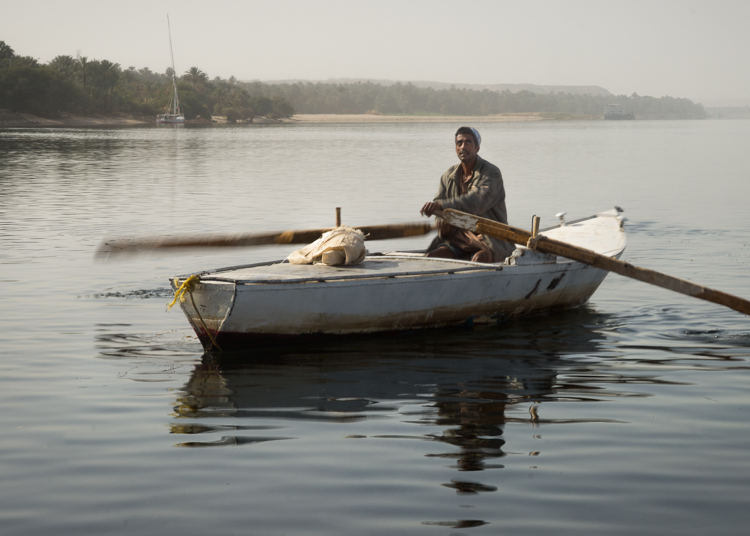 Rowing to Work Near Kobaniya

Egyptian people seem to be constantly working and in motion, so I was able to work on a personal project showing this movement.  It meant being ready for short-lived opportunities, some of which were not obvious unless I was pre-visualizing what a scene would look like at 1/5 sec. 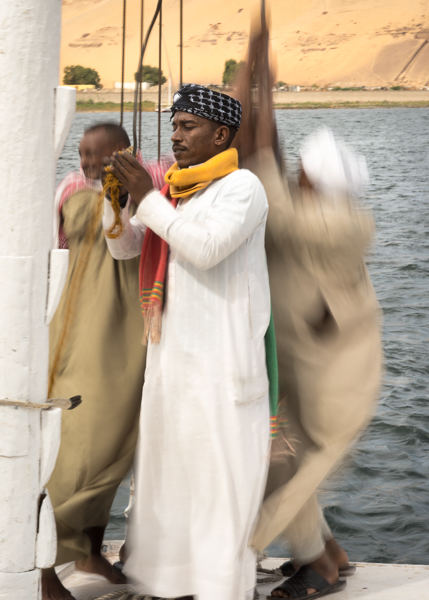 I was using the Sony a99, and being able to briefly review each image quickly in the EVF without changing camera position was invaluable.  The movement in each scene had its own personalty and I often had to experiment with exposure adjustments. 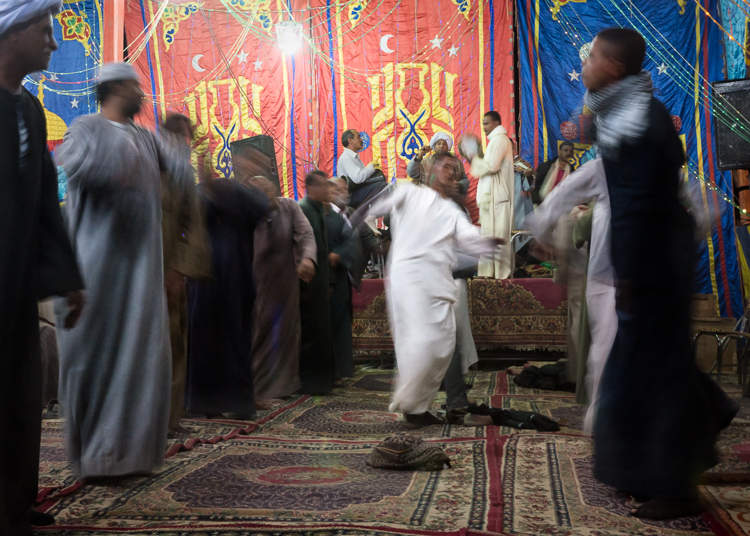 Dancing at the Mawlid

Having Arabic-speaking friends and getting away from the tourist centers had many advantages.  My favorite encounter was happening upon the Mawlid al Nabi, the Sufi sect’s celebration of the birth of the Prophet.  We were welcomed in to share the traditional meal served under large, colorful tents, and then stuck around for the religious music and dancing that followed.  We were the only Westerners there, and were treated like honored guests.  For me, this included welcoming smiles as I was allowed to photograph freely. 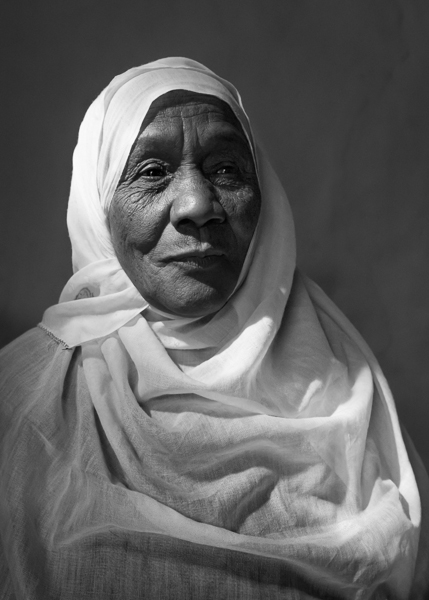 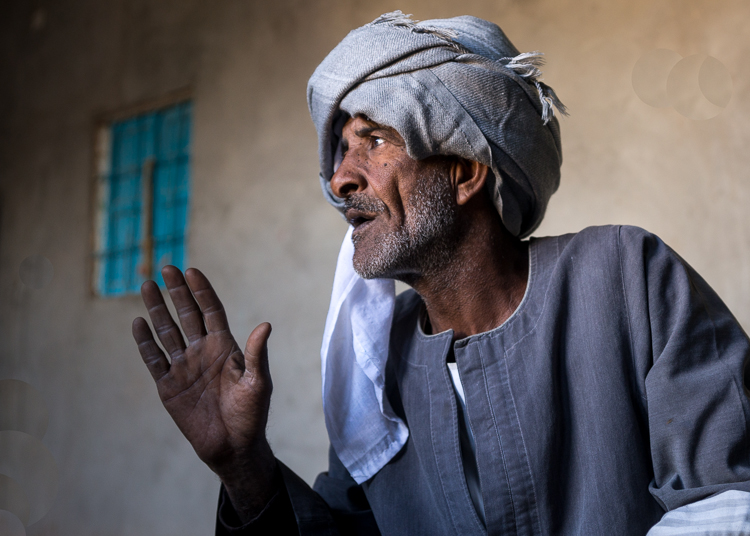 As often as possible, I took opportunities to see rural Egypt, where people mostly sail or farm for a living, and did not see me as a potential profit source. This is where I made some of my favorite portraits, and also where I depended on some of the features of my Sony a99.  The articulating rear screen allowed me to compose images and change settings while I rested my camera on something stable, often my foot, since we usually sat on the floor.  The focus peaking feature helped me focus manually in times when short depth-of-field made perfect focus crucial. 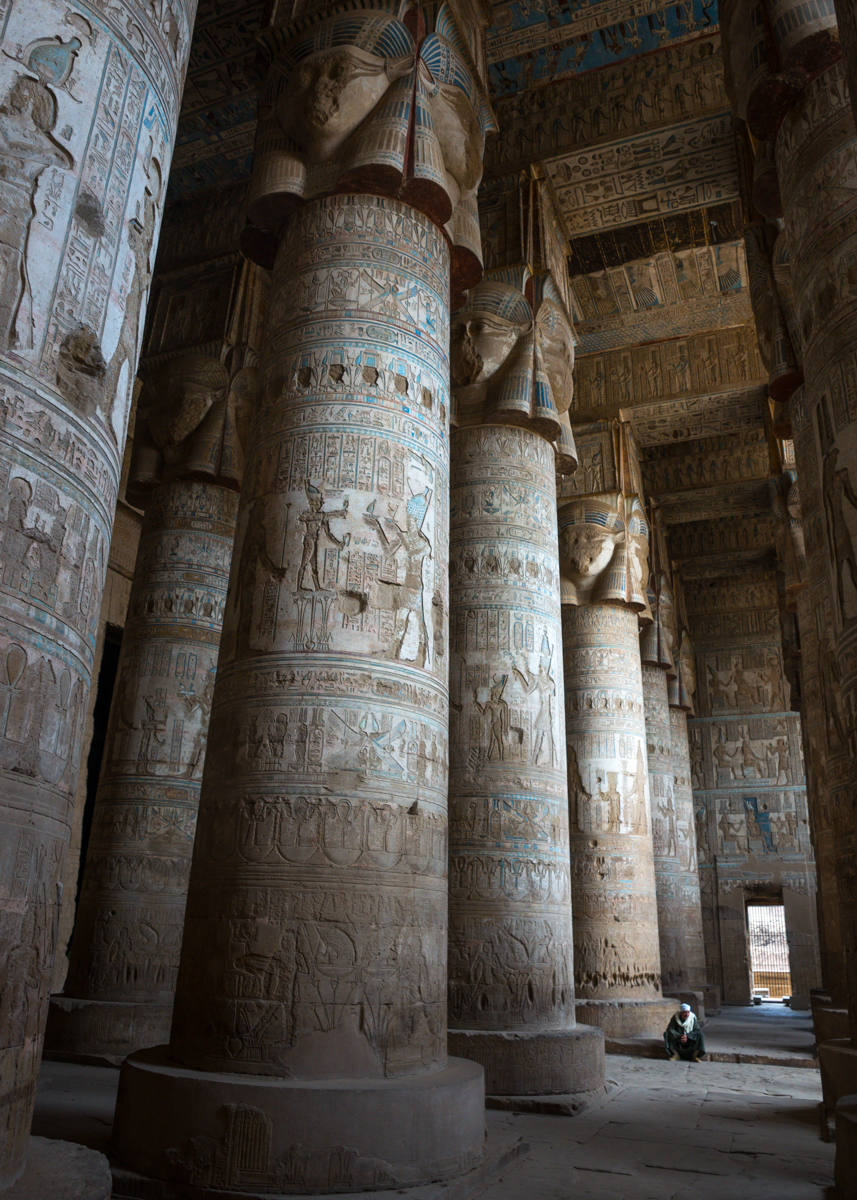 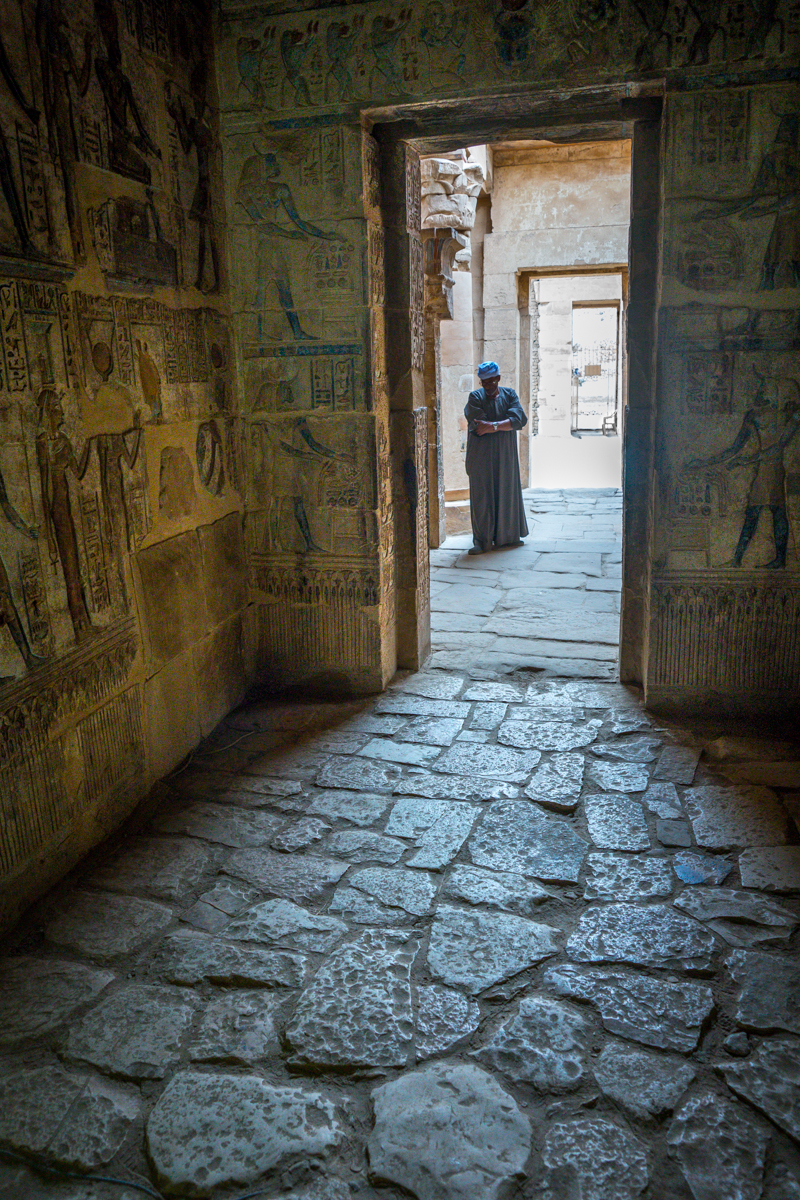 Ancient Egyptian temples and tombs are everywhere in Egypt.  I almost got used to hearing that something was 4500 years old. The strength of the building materials and the dry climate have preserved many buildings and artifacts to surprising standards.  Many of the most famous sites, like Luxor and Giza, are too full of persistent local entrepreneurs for some people’s liking, but a little effort will get you to lesser known tombs in the Theban Hills, or temples like Dendera.  Many of these sites are better preserved and provide a more meaningful experience. 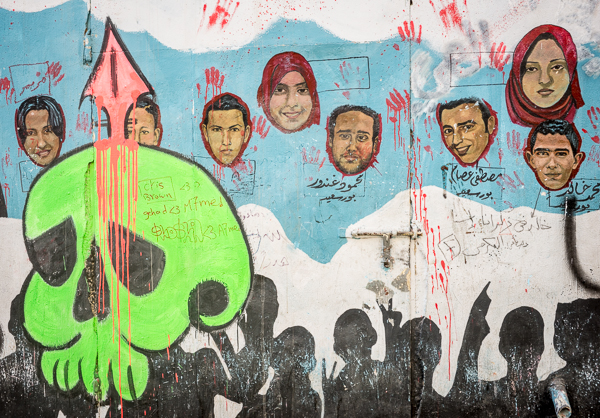 Portraits of Revolutionary Martyrs on the  Graffiti Wall Near Tahrir Square 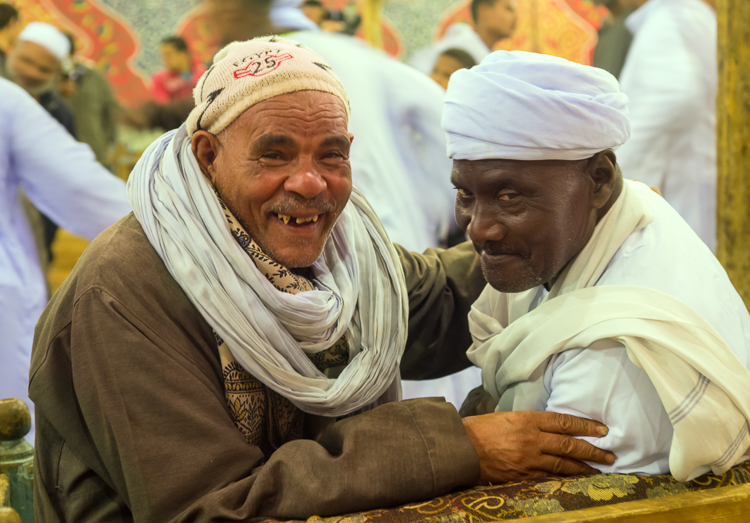 Friends at the Mawlid

When I was there in February of 2013, the Egyptian people were celebrating the second anniversary of the Revolution of 2011, but demonstrations were already starting against that new leadership.  The protests were localized and easy to avoid, especially in Aswan and Luxor where the decline in tourism has impacted people’s lives much more than changes in politics. 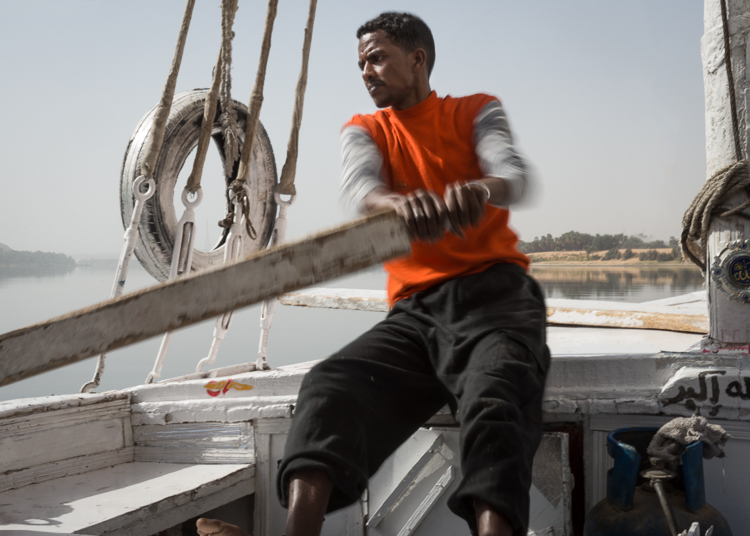 Mohammed Rowing Through the Calm

When stability returns, travel in Egypt will continue to present complex choices.  There are Wonders of the World to be seen, but even experienced travelers may want to retreat to their hotel or tour bus when faced with a constant repetition of  pitches for souvenirs and services.  Photographing the ancient sites of Egypt is fascinating, but finding a way to get away from the crowds, or down to the river, may be more rewarding.

See all articles by Don Whitebread

Don has been making photographs since he took his Instamatic to document the elusive Willy Mays, and has been lucky enough to engage in passions and professions that continue to enhance and inform his photography. While Don has had opportunities to photograph in remote places around the world, his creative home is the Great American West where he is currently working on a portfolio of night landscape photography. His other notable work includes Green Sea Turtles and magical jungle clearing in Hawaii, Hangar One at Moffett Field, the landscape and culture of Yemen, and life along the Nile in Egypt. Don took some darkroom classes in college, but was largely self taught through reading, collaboration and experimentation. He knows Ansel Adams’ books by heart, and has acquired valuable knowledge and inspiration from study with John Sexton, Ray MacSavaney, Brigitte Carnochan, and Mark Nelson. Recent accomplishments include solo exhibits at the World Affairs Council of Northern California and the San Francisco Airport Museum, and group exhibits at the Center for Photographic Art, Viewpoint Photographic Art Center, Etherton Gallery, and Yosemite Renaissance. His work has received awards from Black and White magazine, the Black and White Spider Awards, and the Photography Masters Cup Awards. His portfolios have been featured in Black and White Magazine, and he has published a number of articles in Luminous Landscape and Photo Techniques.

Sky: Looking Into The Landscape’s Soul

FacebookTweet One would say the nature of photography is capturing the light of the subject. For myself, it’s more… From the time I got my