This page is retained simply so that links found elsewhere on this site are not broken. It contains the various reports leading up to the commercial launch of the Canon D30. This camera is now shipping, and for a comprehensive review please have a lookhere.

I am currently in transit back to my home in Toronto after a 6 week long Southeast trip. But, my dealer called a couple of days ago and let me know that my D30 is sitting on the shelf waiting for me. I’ll be able to pick it up tomorrow and will start testing immediately. You can expect to see some initial comments and sample images over the next few days. Of course a full review will follow early in November.

ManyCanonlens owners have been eagerly awaiting theCanon EOS D30digital SLR. It looks like our wait is just about over. The latest news is that dealers will have their first shipments before the end of October.

In the meantimeDigital Photography Reviewhas published a very comprehensive review of a production version of the camera; a first. I’m still digesting it, but Phil has outdone himself this time. Everything you’re likely to want to know about theD30is covered.

I’m expecting to receive myD30within the next couple of weeks and plan to inaugurate it on a major shoot in Arizona in late November. I’ll be posting my own first impressions and photographs as soon as possible.

If you’ve been following the emerging information onCanon’sforthcoming digital SLR, theD30, you’ll be very pleased to learn thatCanon FranceandCanon Germanyhave announced theirMSRPat the equivalent of aboutUSD $2,500. The includes each country’s VAT. (Thanks todpreview.comfor this information).

This price is significantly lower that early forecasts and leads me to believe that the final U.S. retail price will be under $2,000. Given that early comparison tests are showing the camera to be very competitive in image quality withNikon’s D1we have the makings of a very exciting marketplace.

Canonhas placed on linesample picturestaken with a production qualityD30. There are also complete final specs and photos of the camera. Load one of the photos (try the still-life of the bowl of fruit). Do a right-clickCopythen loadPhotoShop, open aNewwindow andPasteit in. Try a small amount ofUnsharp Mask.

As an experiment I usedGenuine Fractals 2.0 Proto res-up the file to 10" X 15" at 240 dpi and made a print onArchival Mattpaper with theEpson 2000P. If someone had told me that the shot had been taken with a fine grained 35mm colour film I would not have been surprised. I don’t know about you, but I’m really impressed!

I’ve spent the past week shooting in Northern Ontario, more than 125 miles from the nearest E6 lab. I mention this because if ever there was a time to have wanted one of the new digital SLRs, this would be it. I’d love to be able to review my work each day rather than having to wait till I return tocivilization.

Soon enough though. Nikon lens users have had theNikon D1for the past year and they now have the additional choice of theFuji S1which began shipping this week.Canon users (like me)  will have to wait about another 60 days because theCanon D30, which was to have shipped shortly has now been delayed until at least the end of October.

Of course the big question is, how will these three sub-$5,000 cameras compare? TheImaging Resourcesweb site now has a comparison of these "Titans" and the results are quite surprising. (Hint‚ the D30 doesverywell indeed!)

A test of a late pre-production D30 by Imaging Resources is also availablehere.

Robgalbraith.coma specialized site for digital photojournalists, has a hands on review of the Canon D30 byUSA TodayphotojournalistBert Hanashiro.  Bert was using a pre-production camera but his comments are generally very positive.

Japanese professional photographerYamada Kumiois a beta tester for the newCanon D30and as of this morning has posted an initial test report and some sample photographsonline. A translation can be found onDigital Photography reviewalong with Phil’s comments. Side-by-side comparisons are made with aNikon D1, which Yamada owns, and the results are quite surprising given the cost differential between the two machines.

The crux of it appears to be that theD30, despite its lower price and C-MOS imaging chip, is going to stand up nicely against theD1. I’m impressed with what I see so far.

There is now a lengthy write up on theD30atrobgalbraith.com. While not the high-end digital SLR that many of us have been waiting for, (this is likely coming next summer) it certainly sounds better than some had feared. Well worth reading. 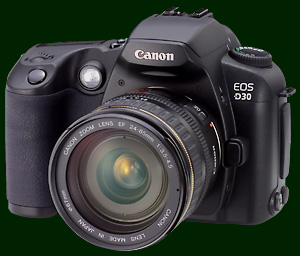 The other shoe has dropped and Canon has formally announced its forthcoming digital SLR, the EOS-D30. Highlights are that it will have a 3 Megapixel CMOS sensor, a list price of U.S. $2,700 and that it will become available in September, 2000.

Here is a link toCanon’s official announcementpage, and also a link to an excellent first-impressions commentary atDigital Photography Review.

More information will be found here as it become available, and of course I will have a hands-on review as soon as the product ships.

Canon finally unveiled their long-anticipated digital SLR on Feb 3, 2000 at the PMA show in Las Vegas. It doesn’t have a name yet, and it won’t be available till at least the fall of 2000.

What’s known at this time is that it will have an EOS lens mount, has an "over 3 megapixel" imaging chip, and a pop-up flash. No word yet on price, though it will of course have to be competitive with theNikon D1. The next showing will be at theCeBITshow in late February, 2000 in Hanover, when hopefully we’ll learn more.

Timing is the issue though. Based on initial specs and appearance this is not the high-end digital SLR that many had been hoping for. And, with a release date of "Fall 2000", Canon it is likely to find itself playing catch-up withNikon’s D1,Fuji S1 Proand others as they inevitably release their digital upgrades. We’ll see.

A great place to stay on top of developments in the digital camera arena is always Phil Askey’sDigital Photography Review. Phil has the latest info, links and reviews of the latest digital camera gear.Hereis one such link on the Digital EOS.

The excellent on-line magazineImaging Resourceshas a PMA show write up with a few more pictureshereandhere.