In the near future when we’re all shooting with digital bodies and backs, every frame will come with complete details on exposure, camera settings and the like. But what about traditional cameras? Well, that same technology is now available for theCanon EOS-1V, the only film-based camera in the worlds with this capability.

How many times have you wanted to make a note of exposure and other shooting data but in the heat of shooting forgotten to do so? I know I have. There are a number of reasons to do so including comparative purpose, trouble shooting and even magazine competitions that want to know as much techy data as possible.

Also, when a shot fails I’m curious to know why. Was the shutter speed too slow and thus the image blurred by camera motion? What aperturedidI use? I thought I had allowed enough for depth of field‚ what happened?. If the exposure is off, was it because the compensation dial was accidentally turned?

Like it or not photography is a craft that involves a great number of technical parameters and their precise control. The Canon EOS-1V and its just-released ES-E1 software does a remarkable job of keeping track of such data and much more. 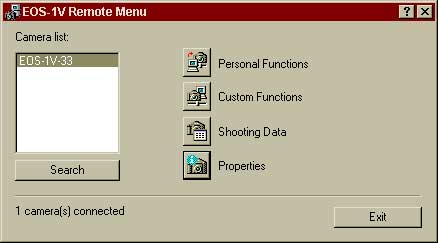 The ES-E1 package for the Canon EOS-1V comes with a CD ROM and a proprietary cable. You should note that this softwareonlyworks withWindows 98based machines. (There is currently noMacsoftware but there are rumours that it is under development). The cable has a USB connector on one end and a Canon remote plug on the other.

As owners of 1V bodies likely already know, the camera is capable of recording shooting data in memory for up to about 100 rolls of film. This data includes virtually every parameter imaginable. When a roll of film is loaded the camera imprints the body number (user settable‚ in my case my body is arbitrarily set to #33) and the sequential roll number just in front of the first frame on the roll.

When the film comes back from the lab and placed in sleeves for storage I write the roll number on the sleeve with a marker, making it easier to identify. If you’re working with slides or negatives in strips then the frame numbers are of course easily viewable. If you use mounted transparencies then of course your lab will have numbered the mounts.

You can attached the body to the computer at any time and transfer the shooting data. This data can be deleted from the camera at this time or saved. Obviously you need to do a download before the 100 roll memory buffer is full.

In addition to this shooting data function, described in detail immediately below, there are extensiveCustom Functioncontrols discussed inEOS-Controlfurther down the page. 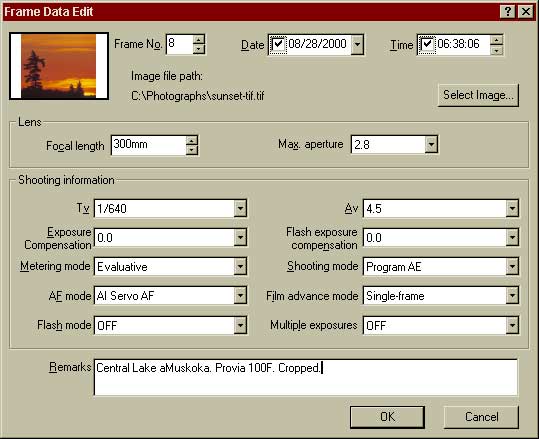 There are so many screens and ways of looking at your data that to display them all would take megabytes on this site and many pages. Let it be enough to say that you can view your shooting data in a wide variety of ways and that this data can also be exported to a spreadsheet inCSVformat (comma separated values), used by virtually all database and spreadsheet programs. Once in a spreadsheet you can manipulate this data to death. Want to find all frames taken with a certain lens? How about everything that you’ve ever shot in spot meter mode? Well, now you can indulge your neurotic fantasies to the max!

The above data editing form is indicative of what you have to work with. If you’re curious, the photograph that the data refers to can be seenhereas part of a Summer 2000 portfolio fromLake Muskoka, Ontario.

At this point you’re probably wondering how the thumbnail got there. Simple. Any scanned image can be easily loaded as a thumbnail. No need obviously to scan the whole roll. Just the ones that you are most interested in and working with. If for some reason you wanted each and every roll to have complete thumbnails then the simplest way would be to have aPhoto-CDscan made at the time of processing‚ the least expensive way. Loading the picture is simply a matter of clicking on theSelect Image..button as seen above and pointing to a TIFFfile. (It should loadJPGfiles as well, but my copy of the software refused to.) 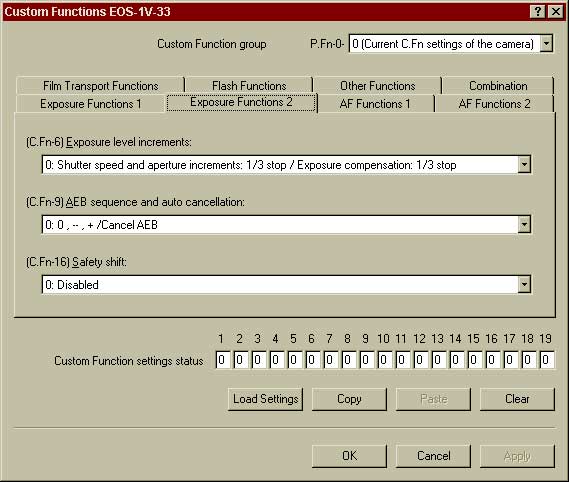 Some people areCustom Functionnuts. I’m not one of them and so I won’t go into anywhere near as much detail as you might like. Sorry. Let it be said though that every custom function that the EOS-1V is capable of can be set from this software‚ a much easier job than doing it at the camera with a cheat-sheet in hand. As you can see above the tabbed screens and drop-down menus make selecting your preferred combination a snap. Uploading them to the camera only takes a few seconds.

In addition, if you’re not satisfied with the thousands of combinations available along with your ability to combine them intoCustom Function Groupsaccessible at the touch of a button under the camera’s palm door, with the ES-E! software you now haveeven morecustom settings available. Arghh. If you like this sort of thing, you’ll love the ES-E1 software!

The software and cable isn’t inexpensive at about US $200, but only you can decide if it’s a worthwhile investment. As a teacher, I am finding it invaluable.

If your local dealer doesn’t stock the ES-E1 package you can find it through various on-line retailers, includingCalumet. Once there, just do a search onES-E1.