Sometimes photographs taken months, even years apart, resonate with each other. It can be the subject matter, the style or some more subtile aspect that ties them together. Almost invariably it’s just coincidence that we discover a visual link between them. But, on my July, 2003 trip to Iceland I took two photographs that resonate with each other in an uncanny way. Each has its own story, quite unrelated to the other, just as their subject matter is quite different. Yet, when they are seen together their linkage is unmistakable. I was not aware of their similarities until after I had returned home and printed each of them.

What does it mean and what does it have to teach us? I honestly don’t know. But there must be something more than coincidence going on here. 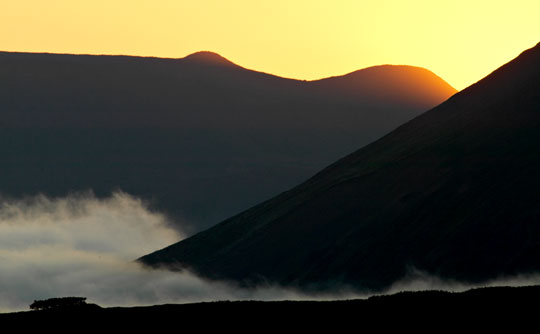 Iceland’s weather is dominated by being on the Arctic Ocean yet also in the Gulf Stream. This makes for mild winters along with cool but temperate summers. It also makes for a lot of cloud and rain. For photographers this can be agood news — bad newssituation. The almost constantatmosphericsare a boon to landscape photography, while on the other hand 2-3 days of fog and rain can put a real damper on ones spirit, not to mentioned making camping a bit unpleasant.

We had been driving and shooting in dense fog for almost 24 hours, but at about 4:30am we drove up into the highlands and found ourselves above the fog layer and in clear Arctic air. Looking in the rear-view mirror we saw the fog bank nestled in the valleys, but also the rising sun throwing a shaft of preternaturally warm light between two mountain peaks.

I used the longest lens that I had with me, the Canon 400mm f/5.6L, along with a 1.4X extender, for an effective focal length of 560mm. This was the first frame of a series, and in later ones the warm cross light started to light up the fog bank. But, none had the incredible glow on the hillside that this frame shows. 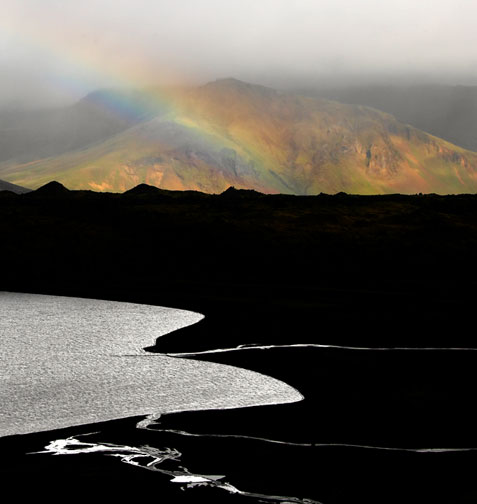 As a landscape photographer I take carewhereI go to shoot, andwhen, in the hope of being in control of the time and place for making meaningful images. And, like most photographers heading to an exotic location, such asIceland, I have preconceptions of the type of images that I hope to make. Rarely does reality match these preconceptions though.

This was contradicted when taking the above photograph on the next to last day of our week-long shoot in Iceland in the summer of 2003. I was feeling a bit dejected, as several days had gone by and nothing extraordinary had presented itself. But then in the mid-morning we found ourselves skirting a row of rain clouds, with shafts of sunlight occasionally lancing though and hints of distant rainbows visible as we drove a twisting mountain road. But no subject presented itself.

Then, I hit the brakes as this scene appeared. I instantly saw that it had all of the elements that I look for in aluminous landscape. It had taken 6 days and some 3,000 km of driving to come across this moment. The rainbow lasted just seconds, and then vanished, but not until after I had taken a few frames.

Later that day during our lunch stop at a roadside restaurant I eagerly transferred the CF card to my laptop computer, and when I saw the RAW file I knew that it had it nailed. Other than some cropping the only changes made to the original were to increase contrast a bit so as to make the dark volcanic foreground almost completely black and the lake a bit brighter. Not quite "f/8 and be there", but close.

Additional photographs from my July 2003 shoot in Iceland can befound here.

Compelling Photographs: The Elements and Principles of Design

It’s probably not the first thing you think about when you’re going to make a picture.  But an awareness of the Elements and Principles of