With the kind assistance of my friends atVistekin Toronto — Canada’s largest professional photographic equipment dealer, I was able to briefly borrow the just-releasedKodak DCS Pro SLR/n. This is the upgraded version ofKodak’s DCS 14n, whichI reviewedon these pages a year ago. This is a Nikon lens mount 14 Megapixel 35mm format DSLR utilizing a CMOS imaging chip.

At the time the 14n appeared I was less than complimentary. I found that the camera was, shall we say, a bit rough around the edges, both in terms of design, build quality and image quality. Since that time Kodak has persevered and continually updated the firmware on the 14n to improve image quality. Now, they have released a new camera, thePro SLR/nwhich, though it looks very much the same, appears to be a dramatically improved camera.

I should be clear from the start that this is a mini-review. I did not have the camera long enough to really put it through its paces, and certainly not for enough time to do anything more than evaluate image quality in a preliminary manner. No field testing was done other than a few test shots outdoors and in my office.

But, this was enough for me to gain a solid impression of the changes that Kodak has wrought, and they are significant.

The camera’s sensor has been improved in a number of ways which contribute to improved image quality. There is also a new faster microprocessor and analog electronic section, which contribute to both lower noise and faster image processing. Whereas the base level ISO of the 14n was 80, the Pro SLR/n now has it as 160. Higher settings now go to ISO 1000, but anything above 400 is still not terribly useful.

Apparently, though I haven’t had an opportunity to evaluate it myself, improved power management now produces better battery life, and start-up time is now down to less than 5 seconds.

The camera I tested had a 512MB buffer and thus was able to shoot up to 18 frames in RAW mode at 2.5 FPS before the camera has to stop and catch its breath. Very nice.

Though the ergonomics remain the same, the quality of materials and finish appears to be better than on the 14n. (Or maybe the improved image quality that I found has just made me more charitable). I now quite like the "feel" of the camera, though the rear panel still juts too far backward in relationship to the viewfinder.The grip appears to have a new rubberized finish that is slip resistant, and the entire body casting seems of higher quality. 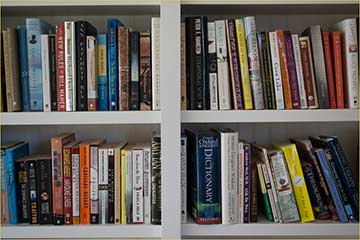 The area where the 14n suffered the most in terms of image quality was at high ISOs and long exposures. In my experience anything faster than the camera’s lowest speed of ISO 80 lead to noisy, waxy-looking, speckled and blotchy images. The SLR/n now starts at ISO 160 and goes as high as ISO 1000.

Files were shot in RAW mode and processed with a beta version ofAdobe Camera RAWwhich supports the SLR/n. I did not have the latest Kodak software available to me the day of testing. CR has always done a very good job with almost every camera’s RAW files, and I am familiar and comfortable using it. Kodak’s software might have produced slightly different, even better results.

Processing in Camera RAW consisted solely of setting the gray balance using one of the white books. In Photoshop a normal (and uniform) amount of unsharp masking was applied to all frames, otherwise no other adjustments were made. Exposures were as metered. 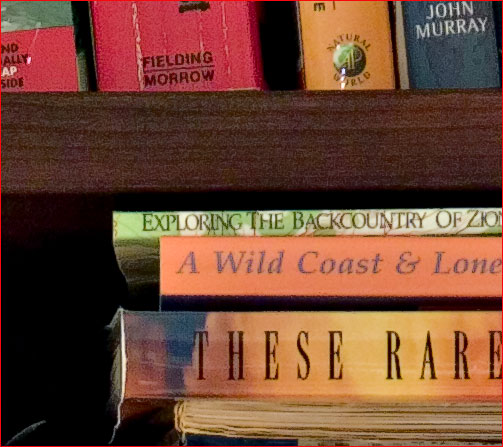 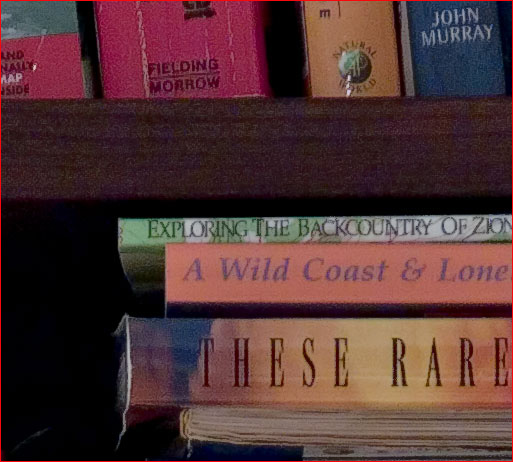 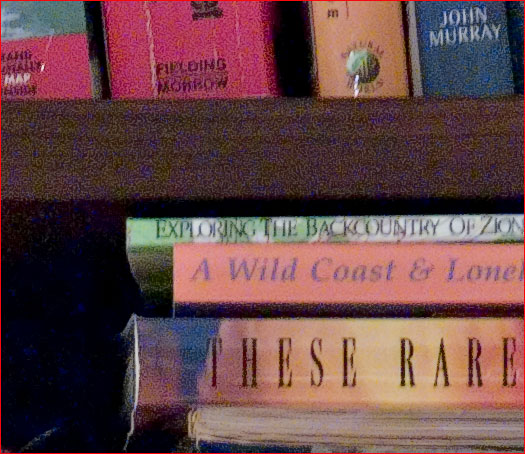 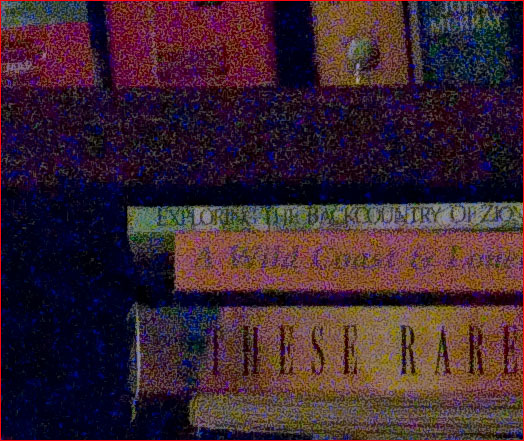 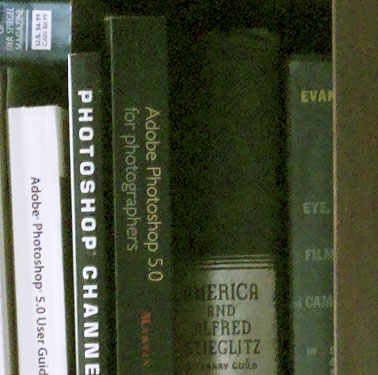 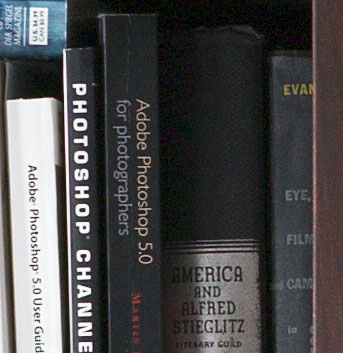 It’s interesting to first note how saturation dramatically decreased from ISO 160 to 250 and how the image loses contrast as the ISO increases. Noise has increased only slightly between these speeds. At ISO 400 the noise is somewhat worse, but blotchyness really starts to rear its ugly head. By ISO 800 the image becomes so noisy and blotchy as to be almost unusable. It’s also worth noting how apparent resolution decreases as ISO increases. This would appear to be as a consequence of some in-camera processing, though I can’t be sure about this.

In Figure 6 I have reproduced two frames from thesecond partof my review of the 14n a year ago. These show the 14n at ISO 400 and the Canon 1Ds at the same speed. Different books, different lighting, but little more needs to be said. The SRL/n shows an improvement in image quality at ISO 400, but it still can’t compete with the Canon 1Ds, which is essentially noiseless at this speed.

Just as with the 14n, resolution appears to be very high. There is no antialiasing filter, which certainly help retain high resolution, but which can also contribute to moire in some situations (such as with fabrics). I am much less critical than I was a year ago of the Pro SLR/n’s handling of dark and low contrast areas, which on the 14n took on a heavily waxy appearance. The new camera isn’t as good as the Canon 1Ds in this regard, but is far better than the 14n was.

The Pro SLR/n produced possibly the most accurate colour rendition that I have ever seen or measured from a digital camera. With the exception of the red square, which shows slightly decreased chroma, every other colour was rendered with very high accuracy. The skin tone square (second from upper left) is slightly pinker than it should be, but otherwise I can’t find any fault at all in the way that the Pro/n handled colour. This is the type of performance that I would have expected to see from a custom profiled system. 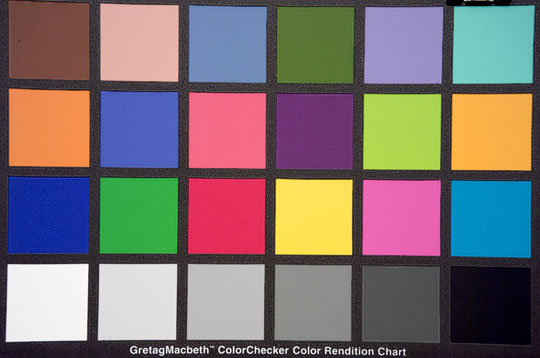 Figure 7
This chart has been converted to sRGB from the Adobe RGB colour space
for display on the Net. Please go by what I wrote, not by what you see on your monitor.

This test was conducted usingDxO Analyzer.
If you are not familiar with this optical testing system please readthis tutorial. 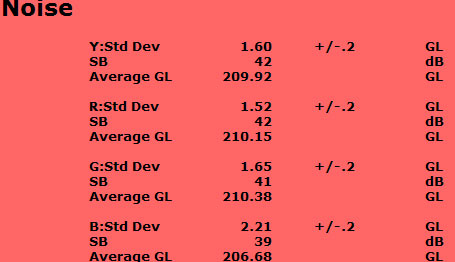 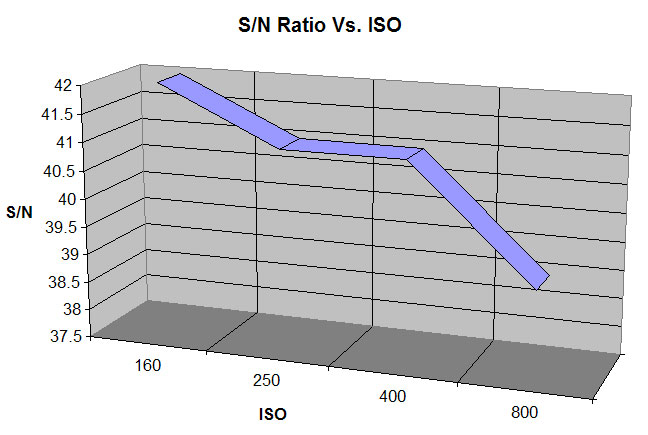 No other DxO tests were performed because they would have involved testing the complete lens / sensor system, which was not practical at the time.

I am really impressed. The Kodak Pro SLR/n, though appearing to be a very similar camera to its predecessor is cut from a different cloth. Naturally a brief first-look like this can only tell us a little about a major new camera, but the little that I’ve seen has left a very positive impression.

I would say that for Nikon lens owners who are able to work at ISO 160, and who require a full-frame DSLR, the Pro SLR/n is a very compelling choice, particularly with its new aggressive pricing. Wedding and fine art landscape photographers — anyone who won’t miss high ISO shooting or very high frame rates, will find this camera to be an attractive proposition. You should visit your local dealer and try one out. Until Nikon gets it’s full-frame digital act together this is the only game in town for Nikon lens owners, and it looks like a good one.

Just as I was preparing this mini-review for publication came the news from a trade show in Germany that Kodak had announced theDCS Pro SLR/c. (The link is to an announcement on DPReview). This is a version of the camera for the Canon EF (EOS) lens mount. Just as in the 1990’s, Kodak now again makes versions of the same digital camera for both major lens mounts. The Canon mount version isn’t exactly the same body (since the 14n and SLR/n were based on a Nikon-based body design), but they appear to be quite similar. It looks as if Sigma is the OEM manufacturer this time.

Naturally I will be very interested in handling and testing this new camera when it become available. There is no indication of price or availability yet from Kodak, though my guess would be some time in the late summer of 2004 and with a price the same as that of the /n version.

Please don’t write to ask if I could test some other aspect of the camera.
It is not longer available to me for testing, and I’m not sure when or if it will be again.

Not everyone is as positively disposed toward the new Kodak SLR/n as I was. The following e-mail was received the day after first publication…

I saw your mini-review of the Kodak SLR/n and thought I send along a comment.

Yesterday, 3/18, I happened to have a SLR/n in my studio for testing.
As a Nikon user I was hoping that this camera would help fill the
resolution gap until Nikon comes out with a D2x. At this point I need
higher res for myself and my clients and am debating going the medium
format route or adding a 1Ds and few Canon lenses to my equipment (with
a possible change to Canon if all goes well).

The positive reviews I’d read on the new slr/n were encouraging.

In any case, the slr/n arrived yesterday morning from B&H and I started
shooting some raw shots with it. Most shots inside were fine
(available light or strobe) but some shots did show some disturbing,
heavy blue fringing if a white surface was in contact with a darker
surface.

I then tried the camera outside…. I found that if if anything is back
lit then a heavy magenta or even purple cast is possible. This is very
hard to remove in Photo Desk or in Camera Raw and doing so seems
to throw off the rest of the image.

This is compounded by the fact that the slr/n does not like
underexposure. Below you’ll see some samples, a shot of the back of my
house with some backlit trees in the upper corner. With my D1x I can
expose to hold the highlights and then bring up the mid-tone and shadow
detail. With the slr/n this is not possible. It’s leads to
significant clumpy noise even at ASA 160. It also has implications for
blending/compositing images shot separately for shadow and highlight
detail.

I came to the conclusion within a day of using the camera that it’s
still a studio camera that works best in very controlled situations. I
promptly packed it up and sent it back to B&H. 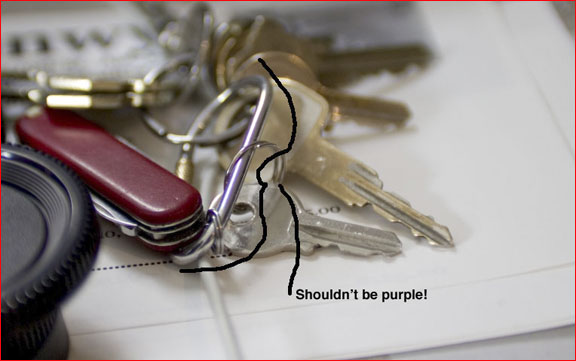 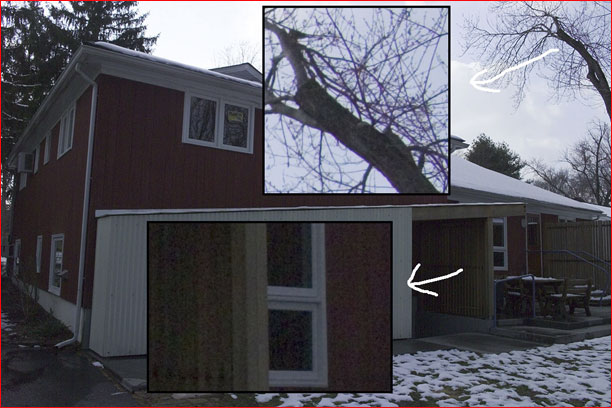 Workshop Photography by David Graham David is an Architect with a small practice on the South Carolina coast, and enjoys photography as his hobby.