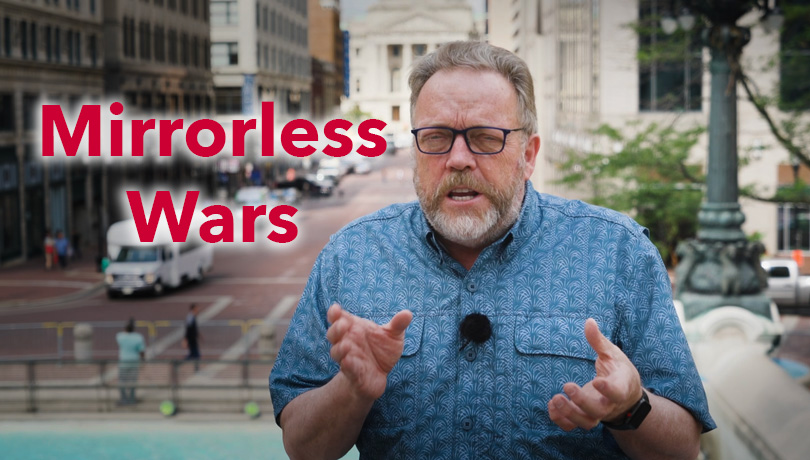 It Will Be An Interesting Rest Of The Year

Since the early 2000’s, the photography community has been part of what could be termed the megapixels war. Camera manufacturers, as well as photographers, raced to keep up with having the latest and greatest camera with the most megapixels. We all wondered how much was enough. We crept from 6 megapixels to 12, 24, 26, 40, 45, 50…all the way to 100 megapixels.

Over the last 18 years, this long war has settled down. Photographers have come to find their comfort level with the megapixels and sensor sizes that work best for them. Along the way, all of us have benefited from improved dynamic range, high ISO and low-light performance, and the advancement in post-processing. All of this has allowed us to live in a world in which taking pictures has never been better or more fun.

Over the last several years things have gotten even better as many of us have enjoyed the technical innovations in the newest lines of mirrorless cameras. These are cameras without the mirror mechanism found in traditional DSLRs. A mirrorless camera uses the same chip that takes the image for showing a preview and handling AF.

Size and weight were one consideration, but performance and sensor technology also played an important role. Fuji released the amazing APS-C cameras with great glass and exceptional image quality. The X-Tran camera has become a favorite for many photographers. I own a number of Fuji cameras and love them all. They make photography fun. Plus, Fuji continually updates the firmware of these cameras, adding ever newer and better features. This has been a huge selling point for the acceptance of the Fuji lineup.

Fuji also introduced a new sort of medium-format camera in the last year, and it has also found a niche. They call this the G format. It skipped over the full frame size and went to a larger sensor. They have been introducing new lenses at a rapid rate, and there is no question that in the coming months we will see this camera move up to a 100MP sensor.

Hasselblad also produced a mirrorless camera, the X1D. This little gem answered for many what mirrorless was all about, a small, lightweight system with a large sensor. You could now assemble a medium-format mirrorless camera with several lenses into a small, compact, and lightweight package and take it into the field. I’d also expect to see a 100MP camera system coming from them in the not-so-distant future.

Phase One has not yet entered the mirrorless world, but I expect they are working on something. In the meantime, you can do mirrorless with the use of their backs with the ALPA camera lineup as well as other technical cameras.

In the M4/3 marketplace (Micro Four Thirds, for those who aren’t familiar), Olympus and Panasonic have been killing it. Both these companies have a fantastic set of cameras and solutions, with some incredible lenses that can be shared on both cameras. Olympus has built some exceptionally well-constructed cameras and lenses with their pro line. Panasonic has focused their efforts on cameras that answer the video needs for many videographers.

Both of these companies have a loyal following and answer the needs of those who want a small, lightweight camera with big camera performance. Olympus has made some great lenses. If you are an adventure or backpacking photographer, you should check out these two camera systems. We’ll have an On the Rocks video episode soon on the Olympus system.

Now let’s talk about the mirrorless market disruptor, Sony. Sony came out of nowhere a few years ago. They introduced a full-frame mirrorless camera, the A7, and many took notice. Over the last few years, Sony has refined and introduced so many mirrorless cameras that your head is left spinning. Each release heralded new innovations that continually improved their cameras. The latest releases, the Sony a9 and a7III, are real performers and show what mirrorless is capable of. Their lens line with the new G Master lens and their attention to the long lens marketplace show just how serious Sony is. Sony fully intends to be the top dog in this marketplace. Based on what I’m hearing from camera stores and friends in the industry, it is safe to say that the a7iii is selling like hotcakes. Features and price point make it a winner for many. I believe that it’s also been the tipping point for waking the two sleeping giants who have yet to do anything significant in the mirrorless market, Nikon and Canon.

Both Nikon and Canon claim they are making professional, full-frame mirrorless. Nikon has even released a teaser video that has the photo community clamoring for more info. They have stalled their own sales and may have slowed down other camera makers’ sales too as photographers await the debut of this new camera on August 23. No matter what, they will have to release a really good camera system as well as lenses. We already know it will be a new lens mount. No word on when it will actually ship. I am excited to see what is coming.

Canon is still quiet, and I believe they are working on something big. Wisely, they haven’t said anything yet. But Canon will have to use what I call the nuclear option to enter this market successfully. They will need to top everyone else in features, lenses, and performance.

So, we’ll see what happens. I know Sony won’t take any of this lying down, and I am sure they not only have a battle plan but also some other new cameras that they will release.

Yes, there will be a mirrorless war. It could be short or drawn out. No matter what, though, it will be one that can only benefit us as photographers. Sides will be taken; fanboys will defend their choices. I hope it all stays civil.

I hope in the end we can look at a system that is right for us and go out and enjoy taking photographs.

FacebookTweet Apple has crammed some amazing technology into the svelte frame of the 11” M1 iPad Pro. At almost exactly 1 lb in weight, it

Of beautiful trees and ambitious cameras and lenses. Part 1 – where we’ve come from.

FacebookTweet I was hoping to be on the Pacific Crest Trail at this point in the summer, but a knee injury has left me wandering