Are We There Yet?

Photographer Michael Friedman, writing in a thread called "16.7MP. Now What?" in the Canon 1D/1Ds forum on dpreview.com, asked what struck me as a very interesting question. He phrased it much better, of course, but essentially it was: Are we there yet?

In other words, what more do we need? What improvements come next? What should camera makers strive for? (He specifically asked people not to mention price, as we all know we always want things to cost less.)

One structural change I’m reasonably sure of is that eventually we’ll lose the reflex mirror. The viewfinder will see what the lens sees, but not optically. That will merge current SLR through-the-lens advantages with a live LCD.

Many people have mentioned great DR, and I’m sure that will come. Well, it may be here, in the Fuji S3, we just don’t know yet. We’ll find out in the next month or two.

One thing the market needs (but maybe photographers don’t) is greater simplicity of operation. Many potential buyers are put off by the complexity of the devices. Kodak is "cutting edge" in this respect with easy-to-use cameras like its 7440 and the Printer Dock.

Personally, with the major exception of dynamic range, I think they’re already there in the Mo’ Bettah department. I.e., for me, cameras have enough megapixels, cameras are responsive enough, cameras are light enough, successive exposures are fast enough, files are big enough, ISOs are high enough. Progress will consist of putting more of these features into the same camera ( and of course making them less expensive).

I’ve used enough cameras over the years to know what my own "ideal" parameters are. Obviously these will vary from person to person (with many "measurebators" just wanting mo’ bettah without end), but I know what I like and need. Here’s the list:

– About 11MP. As an artist and fine printer, I want to be able to print at the highest resolution, 360dpi, without uprezzing. My largest standard print size is 11 inches in the longer dimension. At an image size of about 4000 x 2700 pixels, my need for "mo’ pixels" effectively ends. And no, that doesn’t mean yours has to – I’m just speaking for myself.

– A camera about 20 ounces in weight. Smaller and lighter is better when schlepping, of course, but to me, 20 oz. for the camera body is the weight I want in my hands when shooting. Substantially more feels like too much, and substantially less feels, well, insubstantial. So once a camera is at 20 ounces, my need for lighter weight is at an end.

– ISO 1600. Realistically, there’s a limit to how much sensitivity one ultimately needs. Very low light is often very crappy light. In practice, the highest rating I’ve ever used with film is 1000, and, frankly, it’s enough, especially with modern flash options and anti-shake. So throw in two thirds of a stop more to make the number nice and round. At ISO 1600, therefore, my need for greater sensitivity ends.

– 15 second exposures without noise. The longest exposure I’ve ever actually used with film is 15 seconds, for a moonlit "lakescape." Considering that DSLRs offer higher sensitivity than the Plus-X I was using back then, I don’t feel the need for exposures of greater duration.

– Lens speed of f/2. On film cameras, f/2 is an ideal compromise between speed, size, and cost. The f/2 lens on the Sony F-707 I used a couple of years ago was mighty nice to have. But after they get to f/2, I don’t honestly need lenses any faster.

– Lens focal lengths from 18mm to 180mm in 35mm equivalency. The limits of what I personally use is actually more like 28mm to 150mm, but I realize I’m conservative in this respect. But once a system offers this range, I’m golden. So call it 18mm to 180mm to take most other peoples’ needs into account. And this is, of course, assuming that there will always exist lens options up to 600mm equivalents for those who need them. (I think most of the anguished wailing from almost-non-photographers claiming they "need" more extreme focal lengths than digital currently offers is basically just whining for whining’s sake.)

– A battery that lasts as long as I can. I figure I can only stay awake a certain length of time. If a battery lasts as long as I do, why do I need more? My longest day is now about 20 hours. Add a fudge factor again, for younger people who can skip a night (as I used to do regularly), and call it 36 hours. A battery that lasts for 36 hours with moderate to heavy use is enough for me.

– 5 frames per second. Granted, I’m not a sports or wildlife shooter. I used "motor-advance" with 35mm mostly as a way of cocking the camera. Even so, there’s a limit to how much "motor drive" speed most amateur/art photographers really need. I think 5fps is it.

– Same thing goes for buffer depth. Granting that some pros will want more, I just can’t see needing any more than 24 exposures at a 5fps frame rate. I’d never touch that limit, personally, but it would be, as they say on the fora, "nice to have."

– Shutter lag of 30 ms and mirror blackout of about 60 ms. I love responsive cameras, but quicker than that and I can’t tell the difference. Unlike most people, I know this from direct experimentation. Fast is great, but fast enough is fast enough.

As you can see, what I’m doing here is simply specifying what’s "enough" for me personally. As a consumer, I’m saying I wouldn’t be enticed by (or persuaded to pay for) parameters that exceed what I’ve named above. And, as you may have noticed, every single one of the above parameters has already been met. Not all of them in the same camera, granted, or with all lenses; but the technology exists.So what don’t we have that I’d like? Not much, friends, not much. Here’s the short list:

– Say 3 stops more dynamic range than DSLRs currently have. Really 2 would be enough for most situations I can imagine, but call it 3. As I say, we are at this moment awaiting the reviews of the S3 to see if this, too, is already here.

– Live LCD preview, with a screen that at least articulates 90 degrees upwards so it can be used as a waist-level finder. This is really the best thing about current high-end digicams (their Achilles’ heels being slow, uncertain AF and higher noise at lower sensitivities than DSLRs). Sooner or later we’ll have it on DSLRs, too, when EVFs get good enough to replace optical reflex mirror systems.

– Better viewfinders. I’ve written extensively about SLR viewfinders here, but suffice to say that most DSLR vf’s are relatively stinky so far. This is an obvious area for future improvement. 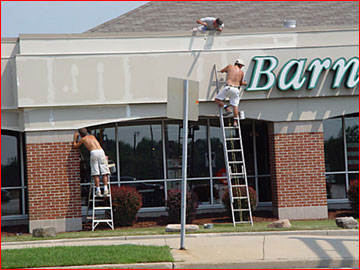 Oh, of course there are my own quirky little enthusiasms, which I realize are pretty fringe. That would be a few f/2 prime (single focal-length) lenses at the normal to wide end, and dedicated b&w versions of a couple of mid-range DSLR cameras. The latter would be simpler, faster, and offer more effective pixels per square mm than color sensors converted to b&w in software (why? Because all the pixel sites could record value, instead of devoting two out of every four to color information). A niche product, for sure, though I do think we’ll get there someday. But these two things, I realize, are pretty far from what the market as a whole is clamoring for, which is why I left them off the main list.

And so that’s my two cents on the matter. Digital technology is mostly here today; it’s not so much "more and better" that we need, as much as thoughtful and better integrated blendings of current capabilities into single cameras. We’re certainly getting there fast.

Next week, another "extra" column, essentially Part II of the present argument: Mike’s FULL-FRAME MANIFESTO. (I love it when I get to rant!)

Until then, all best,

SUBSCRIBE to the newsletter and get issue #6 and #7! ClickHERE. Do it NOW, while it’s fresh in your mind, and before Mike decides to start talking politics again!