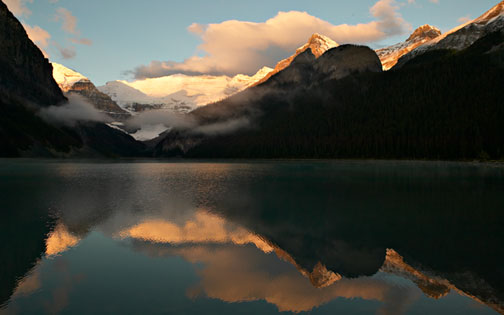 Every country has its icons of natural beauty. In the U.S. most would agree thatYosemite National Parkfills this role, while in CanadaBanff National Parkcertainly is a leading contender.

I hadn’t been to the Canadian Rockies in almost 20 years — a serious oversight on my part. I therefore planned a major landscape shoot for the Fall of 2003, but as luck would have it I found myself in Banff just two weeks before on a personal trip, which served well as an opportunity to scout locations for my upcoming October shoot.

Though it was mid-September and the weather should have been mild, it snowed the day we arrived, and remained cloudy and cold for most of the week. This lead to some dramatic skies, and though this particular trip didn’t have photography as its prime focus, I was still able to do some enjoyable work.

The above sunrise frame fromLake Louisewas unusual. We had terrible weather most of the week, but one morning I glanced out of my hotel window (Chateau Lake Louise) just after dawn and saw the most amazing sunrise developing. I quickly threw on my clothes, cursing the fact that I wasn’t prepared, and raced out to the edge of the lake. I missed the best light by minutes, but this frame satisfies nevertheless. Most people that I’ve spoken to say that light like this is very rare there at dawn because of the glacier. Usually fog is the order of the day, or at least early morning.

While snow, clouds and passing showers can put a damper on a mountain vacation, these can be ideal conditions for landscape photography. Clouds can create an extra dimension, and in the frame below almost a window effect 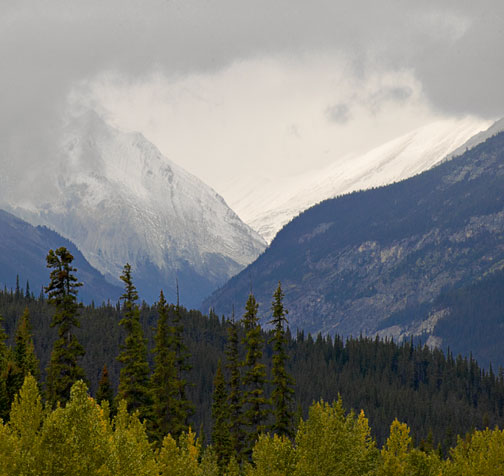 One of the unique possibilities in mountain terrain is to find clouds below the horizon, or in the case of the image below at the bottom of the frame. In this instance the fact that the cloud cooperated by sitting just below the ridge line, and that there was a complimentary cloud above the snow-clad peaks, makes for a fascinating view of late afternoon mountain light and weather. 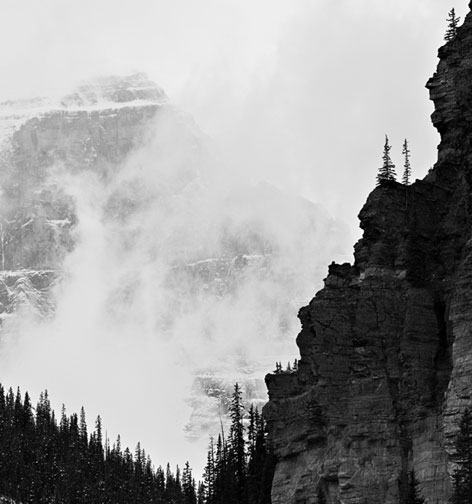 More often than not when I shoot in mountains I find myself working on B&W. With the exception of dramatic sunrises and sunsets, which can easily become cliched, I find mountainscapes to be about shape, form and tonality, and therefore working in monochrome lets me concentrate on these aspects of the potential composition. 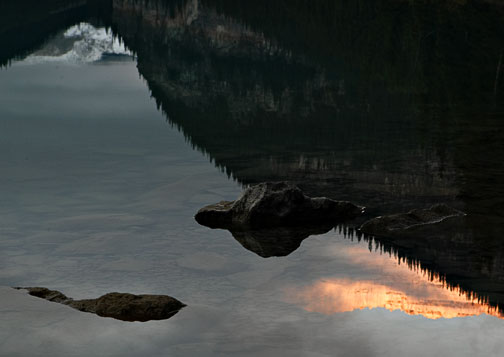 The Rockies are as much about lakes as they are about mountains and clouds. On this particular morning the sky was perfectly clear before sunrise but fog quickly rolled in and blanketed everything, reducing visibility to just 50 feet or so. Then, just as I was preparing to call it a bust and head back to the hotel for coffee, the fog overhead parted for a few seconds allowing the the dawn light on the glacier above to be reflected in the lake.

In early October, 2003 I returned to this area for a 7 day, 7 National Park shoot. In my write-up titledThe Canadian RockiesI feature images from that trip as well as well as a detailed report on my field experience with medium format digital for the first time.