On July 22nd I spent a day atBrooks Camp, Alaska‚ arguably the best place in the world to see bears at close range. If you have seen a photograph of a bear fishing for salmon at a waterfall, it was most likely taken at Brooks Falls.

Located insideKatmai National Park, access to Brooks Camp is via floatplane or boat‚ there are no roads. Commercial flights fromAnchorageare available intoKing Salmon, and from there numerous charter services can take you the last 30 miles or so out to Brooks Camp. King Salmon is a rather unattractive little town, and the day we arrived it had been infested with huge swarms of bugs. Thankfully I remembered to bring my head net on the plane and not packed inside my duffel bag!

A 20 minute floatplane flight from King Salmon deposited us onto the beach at Brooks Camp. Every visitor to Brooks Camp must attend a "bear etiquette" briefing delivered by one of the National Park Service Rangers. So many bears live in the area that it is a virtual certainty you will encounter a bear at some point during your stay. Bear etiquette, in it’s simplest form, consists of three rules: don’t get near them lest they lose their already thin fear of humans, don’t surprise them and don’t encourage them to see humans as a source of food. 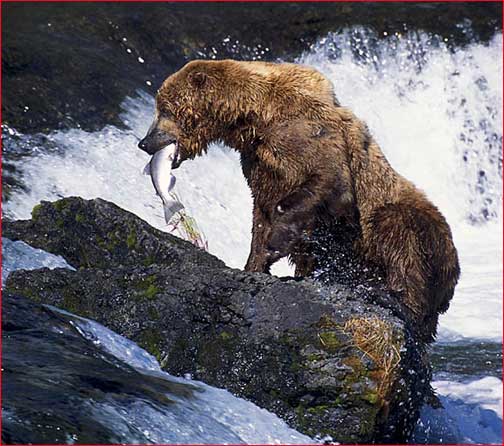 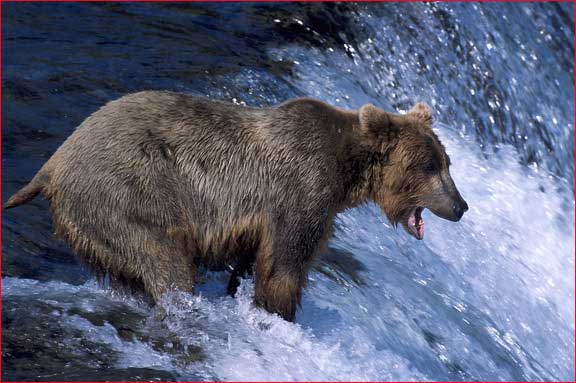 Attracted by an unusually large number of sockeye salmon, the bears spend much of their summer days fishing in the river that runs betweenBrooks LakeandNaknek Lake. The National Parks Service have constructed two viewing platforms to enable visitors to view the bears from a safe place. They are located at the end of a 1/2 mile path through a beautiful forest that we would have photographed had we not been sure there were more hungry bears lurking in the shadows! The lower platform overlooks the river, and the upper platform overlooks Brooks Falls itself. Despite the presence of as many as 40 people on the platform at a time, the bears pay no attention to the spectators. Unfortunately there were a smaller-than-normal number of salmon running the day we were there, and consequently there were only 3 or 4 bears fishing. On days when the salmon are abundant there can be upwards of 10 or 12 bears in the river at a time. 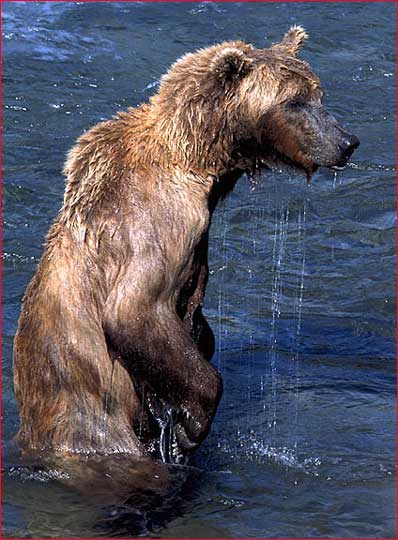 Photographing the bears is fairly easy here. The viewing platform provides a stable base for your tripod, though the crowds can make it challenging to get a clear view. The bears are close enough that you don’t need an extremely large telephoto lens‚ something between 200mm and 400mm is an excellent choice. The platform faces Northeast, so by late afternoon the bears are well lit.

Wandering around Brooks Camp is an unnerving experience. The presence of so many bears is quite intimidating at first, but eventually people realize that the bears are quite accustomed to the presence of humans and aren’t likely to confront you unless you do something really dumb. With so many people and so many bears living in close proximity to each other, it’s quite amazing that there has never been a fatality at Brooks Camp. Credit for this goes to the Park Rangers, who spend much of their day literally "directing traffic" to keep people a safe distance from the bears.

In some ways, Brooks Camp is a sad place. It is certainly one of the rare places in the world where humans can be literally right beside wild animals in their own natural habitat. But how "natural" is their habitat? One gets the impression that the bears are well acclimated to humans, and the fact that they stroll through the Lodge grounds without fear seems to indicate that man’s presence has changed the "natural" behavior of the bears. Fortunately, Brooks Camp is so remote and difficult to get to that the number of visitors is relatively low. Let’s hope that the Park Service can keep the disruption to the bears at a minimum and still keep the area open to visitors. Brooks Camp affords a unique opportunity to photograph these magnificent animals‚ it would be a shame to lose it.

A Light-Weight 4X5FieldCamera Hats off toRobert Whitein the UK for commissioning this most excellent landscape camera direct from the manufacturer. Made from Titanium and Ebony materials,