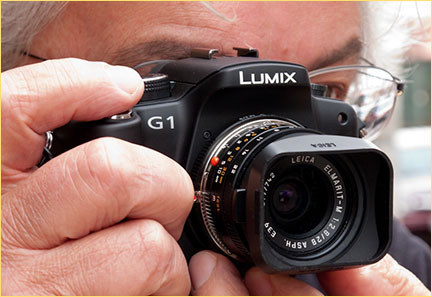 I don’t want to pick a fight. I really don’t. But since getting the CameraQuest Leica M to Micro 4/3 lens adaptor my thinking about the Leica M series and its place in the current taxonomy of cameras has changed.

Let me start by stipulating that I have been a life-long Leica M series fan. I have owned just about every model since the M2 and M3, through the M4, M6, M7 and M8, and have had more M series lenses than is healthy for one individual. I made my living as a photojournalist for more than a decade with M Leicas as my main cameras.

I’ll also stipulate that Leica M series lenses are among the best made and finest performing lenses we have ever had, and that the M3 may very well have been the “best” camera ever made. I have written extensively about all of these topics over the years in various magazines and on this site.

So – now that I have established mybona fides, let’s unleash the dogs of war. I no longer think that the rangefinder cameragestaltworks – at least not for me.

The M Leica was the success that it was among working photographers (rather than collectors) because it was the anti-SLR. In other words it had characteristics which set it apart from the SLR steamroller of the 1950’s and 60’s. These traits included small size, low weight and bulk, a relatively quiet shutter, lack of mirror black-out, and the ability to see beyond the confines of the groundglass.

But this was before the days of autofocus and digital sensors.

The Leica M8 is today the only digital rangefinder camera. It has much to recommend it, but frankly its appeal lies not so much in the fact that its a rangefinder as it does that it still exhibits some of the other characteristics of its DNA, such as small size, simplicity of operation, no blackout, and most of all use of M series Leica lenses. (Yes – I know you love rangefinders, and they’ll have to pry one from your cold dead hand. But trust me, among working photographers today you’re in a very small minority).

By late 2008 I’d pretty much given up on shooting with my Leica M8. I would look longingly at my M lenses, but I just wasn’t feeling the love, at least for the camera itself. Then thePanasonic G1 came along and my ears perked up. Here was a new breed of digital camera. Small, light, moderately priced, and with a set of features which made it attractive for certain kinds of shooting. Though only a couple of native Micro 4/3 lenses were available, these turned out to be very good, and I looked forward to more bodies and lenses in this format from both Panasonic and Olympus.

Because the Micro 4/3 format has a very short back focus distance this means that quite a few different lenses can be mounted on the camera through the use of adaptors. What really attracted my attention though was when CameraQuestannounced a Leica M mount to Micro 4/3 lens adaptor. Maybe this would be the answer for my lonely Leica lenses – a new beginning, as it were. So, I ordered one, and in early February it arrived.

How Well Does it Work? 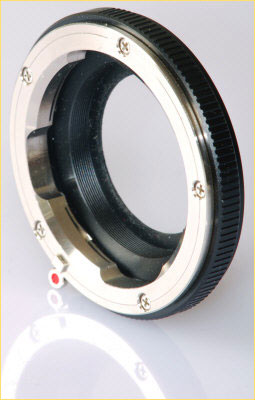 In a word –brilliantly.The adaptor mounts to the G1 (it is assumed it will work similarly on other future Micro 4/3 cameras, but that remains to be seen), and then just about any Leica M mount lens is attached, again in the usual manner. Unlike some adaptors, the device itself mounts and unmounts from the camera simply and smoothly, and similarly lenses come on and off just the same as they would on an M series Leica.

The only thing that one needs to remember to do on the camera side is to set the menu item for “Shoot Without Lens“. This tells the camera not to fuss over the fact there there isn’t a lens attached with the usual electronic interface. Indeed there’s no interface at all.

Operationally things are quite straightforward. One can shoot in either Aperture Priority or Manual mode. No need to set the aperture ring on the M lens to wide-open, as the camera’s Live View system automatically rides the viewfinder and LCD gain. In really low light you’ll be shooting at close to wide open in any event, so not a big deal.

Focus is, of course, manual. With lenses of 50mm and longer I found it quite easy to focus with the EVF. Because of its high resolution it scintillates a bit when focus is achieved. With wider lenses using the camera’s magnification function made focus quite straightforward, though not something that one wants to do when working quickly. In these cases zone focusing is best, just as it always was in the days prior to AF.

The M adaptor arrived just before I left for a vacation in Costa Rica in mid-February, and I has already planned on taking the Panasonic G1 with me as my main travel camera. I also took along my 50mm f/1.4 Summilux so that I could shoot some comparisons. Of course with a Panasonic lens that only opens to f/4, three stops slower than the Summilux, there was no way to compare them wide open, so I did some tests ar f/5.6, which I decided would be equally fair (or unfair) to both. Below is a small sample of one of the test shots taken. In the case of the M lens I focused using magnified mode on the EVF. 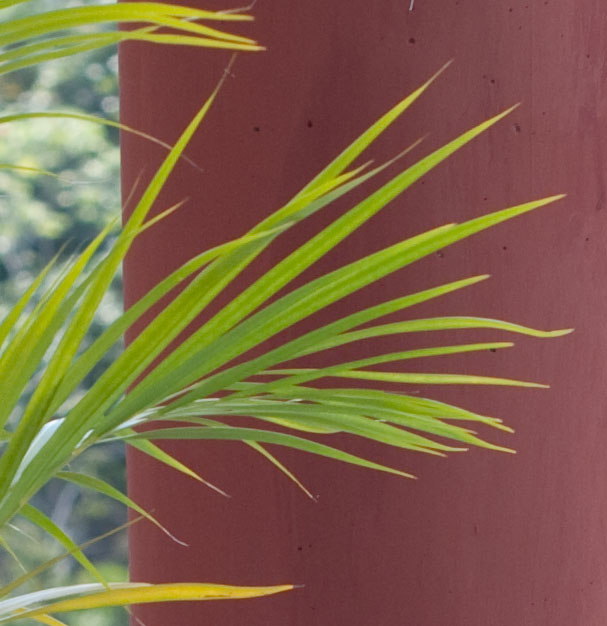 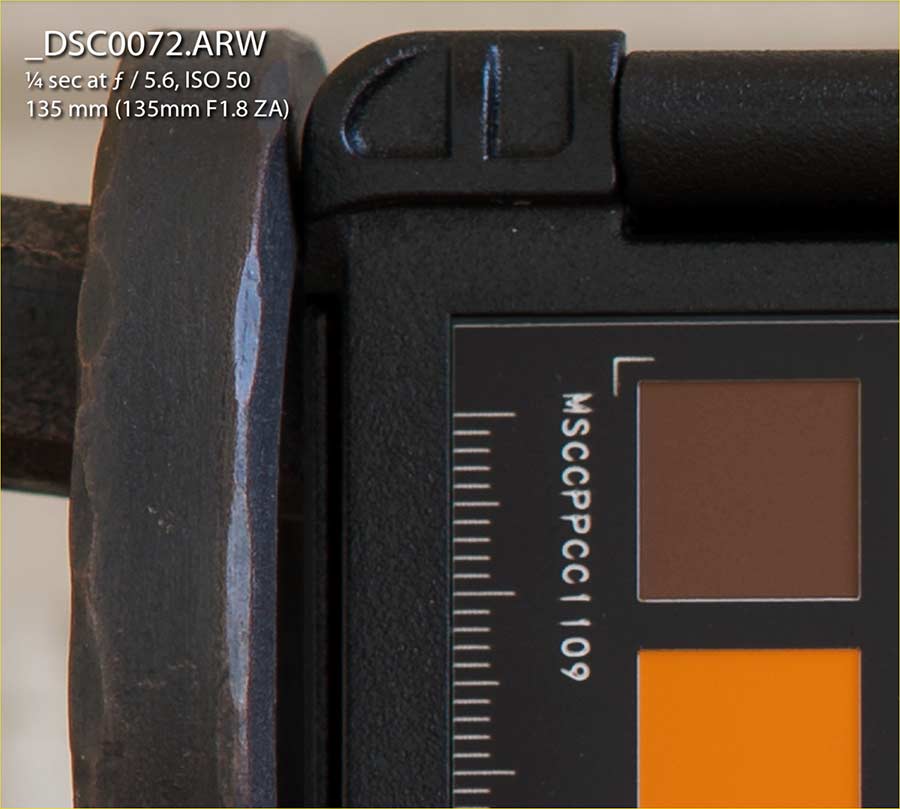 The Leica image displays higher contrast and crisper colour rendition. There isn’t much to choose between them in terms of resolution though, and in other comparison frames I similarly didn’t see any noticeable advantage to the Leica lens.

In the end, somewhat surprisingly, I don’t find that using M lenses on the G1 is very worthwhile. Whether it’s because of some incompatibility between the lens and the sensor, or a subtle optical issue, there just doesn’t seem to be any great advantage – other than the availability of fast apertures. It’s not bad. Not bad at all. It’s just not as great as one might have hoped.

But is it Worthwhile?

Using a Leica lens on the Panasonic G1 is a fun experiment, but I’m not sure that it’s something I would use for day-to-day shooting. Firstly, Leica lenses though small are heavy by comparison with original Micro Four Thirds lenses. In a rig that’s designed for small size and light weight the added mass of a brass mount Leica optic is not inconsiderable.

Of course you also lose autofocus and auto aperture. The latter isn’t that big a deal because of the camera’s auto-gain, but I’ve become spoiled by AF. Manual focus is so, well, 20th Century.

There’s no doubt that Leica M primes are in another league than Panasonic’s moderately priced zooms, but the difference in price and convenience is considerable. And, the theoretical advantages also don’t seem to actually deliver when the photons hit the silicon, as it were.

The bottom line is that I definitely wouldn’t go out and buy Leica M lenses to put on a Panasonic G1. But anyone that already owns some of these optics should definitely consider picking up a G1 or one of the new Micro Four Thirds cameras coming later this year, along with a CameraQuest Leica M mount to Micro 4/3 lens adaptor. It’s fun, and an inexpensive way to explore using these optical gems on a sort-of DSLR.

There is a similar device to the CameraQuest Adaptoravailable from Novaflex, and possible from others as well.

Sean Reid at Reidreviewshas a full review of the G1 from the perspective of a rangefinder camera user.

Gregory Simpson a tUltra Somethinghas written extensively about the G1 and its use with a Novaflex M lens adaptor.

It's been a bit of a Holy Grail for me over the last number of years... I love working with my full-frame system and the