This page contains selected October 2002 submissions from photographers who wished to have their photographs reviewed
by the publisher of this site,Michael Reichmann, as well as by other readers on ourDiscussion Forum.

For details on how to submit a photograph for critique please see theCritique / Contestpage. 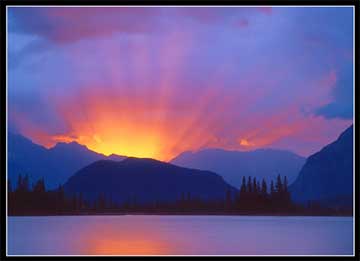 I was set up at Vermilion Lakes in Banff, Alberta waiting for the morning light to kiss the peaks. It started to rain, I waited for a half hour after the rain started, and was just ready to pack up my gear when these beams of light shot through a hole in the clouds. I had time to shoot three shots before the light faded. Sometimes patience pays off!

What can I say? An amazing moment beautifully captured.

You can add your own comments on Darwin’s photograph on the Critique section of ourDiscussion Forum. 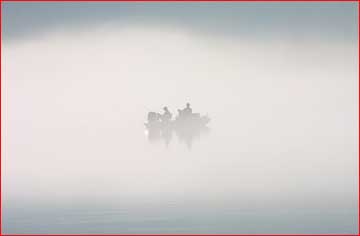 August 24th, 2002, 7.15 a.m. – On an early morning field trip with the local outdoor photography club to Garvan Woodland Gardens, in Hot Springs, Arkansas, we got there before they opened so traveled a mile down the road to Carpenter Lake Dam. The mist was obscuring the dam and the banks of Lake Hamilton but for a few seconds it cleared enough to see these fishermen. I put the camera in program mode and continuous shooting mode and shot 5 frames before the CF card buffer was full and the fishermen disappeared again. An hour later the mist had gone and so had the fishermen!

Shooting in mist and fog can be tough. The eye frequently sees more than the camera. It’s also important to remember to open up about two thirds to a full stop since the camera’s meter will see the mist as medium gray, while you want it to appear as light gray.

You can add your own comments on Nick’s photograph on the Critique section of ourDiscussion Forum. 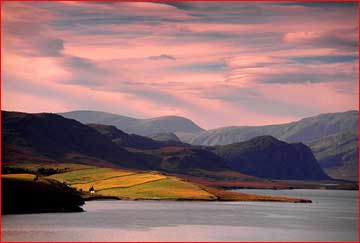 The Scottish coastline near Tongue in Autumn

Michael doesn’t tell us anything about this situation, but what needs to be said? Exquisite light and clouds which repeat the soft patterns of the hills. Just beautiful, and well composed and executed.

You can add your own comments on Michael’s photograph on the Critique section of ourDiscussion Forum. 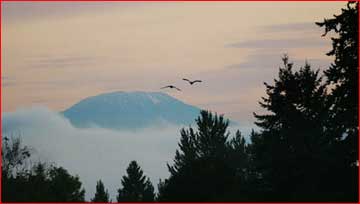 Recently, I observed that a flock of geese were gathering at dawn to eat grain in a newly-harvested farm field about a mile from my home. The next day, I arrived at the field well before sunrise to try to photograph the geese landing in the field. Because of a high fence around the field and a drainage ditch between the fence and the road, the only decent place to photograph was right next to the fence, without any place to set up a tripod. I used ISO 400 so I could get a shutter speed of 1/320 with the lens wide open and I braced the camera against the fence, hoping I wouldn’t get too much blurring at the 200mm focal length. The first geese to arrive were a pair that came from the north out of a bank of thick fog which covered the lake where they presumably spent the night. The geese briefly flew above the tree line and I was able to get this shot of them silhouetted above Mount St. Helens, which is about 50 miles distant.

Several hundred more geese arrived, but all of them came from the east, so this was my only chance to get the geese, the fog, and the mountain in one shot. I tried a few more shots of the mountain, sans geese, from various angles, but I think the birds add a focal point that really helps the composition.

The geese indeed make the shot. While the soft light and mist has appeal, and the silhouette of the trees offsets them nicely, it’s the classic V of the bird’s wings that draws the eye and completes the composition.

You can add your own comments on John’s photograph on the Critique section of ourDiscussion Forum. 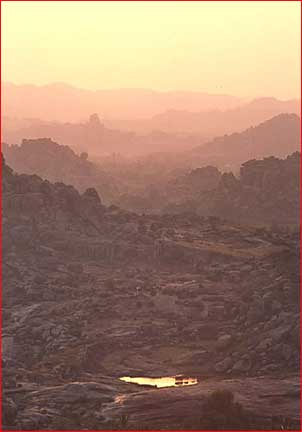 Nikon FM2, Nikkor 180mm, Fuji Sensia 100. About a two to four second exposure. Darkened the sky a bit in photoshop using a levels adjustment with a gradient mask – similar effect to using an ND grad filter, but rather more controllable.

I was taking early morning pictures of a famous scenic group of ruined temples, when I spotted the sunlight catching this small pond in the distance. Didn’t have a long lens for medium format, so I had to set up the 35mm outfit – quickly, because interesting morning and evening light changes very fast in India – and grab a couple of shots.

This photograph beautifully captures the archetypal light of India. The lake reflection is what makes it though, as without it the image would appear dull and flat. perfectly seen.

You can add your own comments on Alan’s photograph on the Critique section of ourDiscussion Forum. 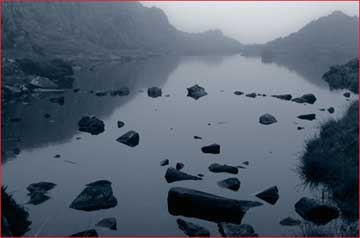 Photo of the summit tarn at the top of Haystacks in the Lake District, UK. It was a very misty day and visibility was minimal.

There’s a moodiness to this photograph that is cased in part by its monochromatic nature and also by the harshness of the subject.

I’m a bit distracted though by the bush or vegetation on the right. Restricting the frame to just the rocks, water and distant hills might have produced a stronger frame.

You can add your own comments on Steven’s photograph on the Critique section of ourDiscussion Forum. 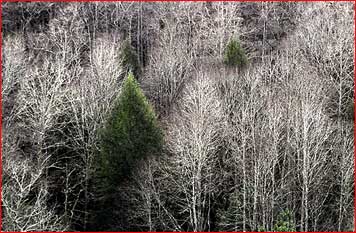 This is a photograph taken several Decembers ago in the woods of northern Alabama. The day was very cold and the evergreens really stood out against the forest of naked deciduous trees. The camera was a Nikon 6006 and the film was Kodak 400 Max.

The contrasts are what makes this photograph work well. But I feel that it might have worked better as a vertical with the alrge evrgreen on the left and the smaller one top right.

You can add your own comments on Larry’s photograph on the Critique section of ourDiscussion Forum. 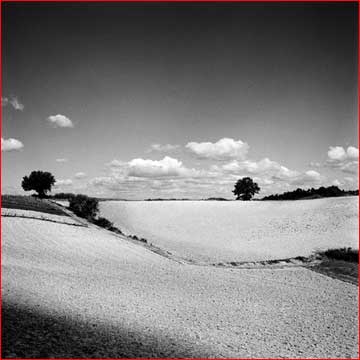 This image was shot on a recent hiking trip through Tuscany, on our way to San Gimingnano Italy.

Straight scan from transparency using Epson 2450, with minor curve alteration on PS 7.0 to recreate feeling when picture was taken.

I had been looking forward to this trip for almost a year. Unfortunately, on much of the trip, the anticipated Tuscany light was absent behind heavy clouds, fog, and rain. Finally, on the last day of the hiking the skies cleared. Unfortunately, I found this field close to noon (certainly not the best time to be taking photographs). (on these organized trips, there is no option to go back another time) Thus, I am surprised the shot turned out better than expected.

Light, texture and form all come together in this strong photograph. I particular find the darkened sky created by the use of a red filter works well with the dark foreground patch.

You can add your own comments on Lawrence’s photograph on the Critique section of ourDiscussion Forum. 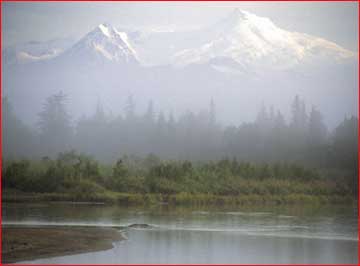 We chartered a float plane to take us across the Cook Inlet from Soldotna on the Kenai Peninsula in Alaska to do some salmon fishing. Even though photography was not the focus of this trip, and we had to pack light because of the weight limit on the float plane, I took my camera along (but not my tripod). It was early morning when our plane landed in a grassy marsh. (It didn’t even look like a place a plane could land). When I stepped off the pontoon, I was only knee deep in water. Our guide had a gun along because bears had been a problem in recent weeks.

This is the Kustitan River with the Chugach Mountains in the background. I liked the way the heavy morning mist affected the mood of the scene. I also like the way the morning sun accentuates the craggy, snow-covered face of the mountains. The skies were nearly always grey and cloudy during our trip, but here I like the way the tones of mountains and the sky seem to compliment one another, with the darker shades of the mountains meeting the lighter shades in the sky, and vice-versa.

Alaska’s light can be fickle, but here the soft mountain light was nicely captured. I don’t care for the bit of foreground earth on the left. Cropping just above it might make for a cleaner frame.

You can add your own comments on Karen’s photograph on the Critique section of ourDiscussion Forum. 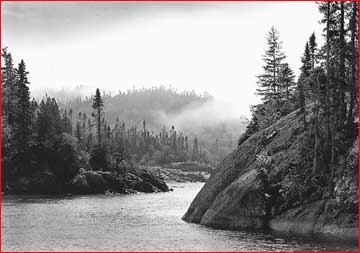 This shot was taken in Pukaskwa (pronounced Puk-ah-saw) National Park , Ontario, which is located on the northern shore of Lake Superior, in August of this year (2002). The weather can change so swiftly here that, with large format, it’s sometimes hard to know what you’ll be photographing until you’re ready and waiting to press your cable release. I set up this view while it was fairly dull and overcast, but within 30 minutes the sun started to shine through veiled clouds and a foggy mist blew in off of Lake Superior in waves creating a mixed palette of contrast and layers. I had about 10 minutes of choosing and shooting and then as quickly as this combination materialized, it was gone.

Large format and a majestic subject have together produced an image that I’d love to see in a really large print. The rugged landscape of northern Ontario continuously fascinates, and John has given us a compelling view.

You can add your own comments on John’s photograph on the Critique section of ourDiscussion Forum. 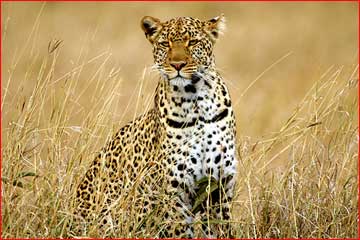 This is Shawow the leopard (as named by Jonathon Scott of the BBC show Big Cat Diary). The guides call her Zawadi (Swahili for ‘the gift’). We’d been following her for some time hoping she might stalk some prey for her newborn cubs (3 of them) back at Leopard Gorge. She didn’t go on to kill this day, but she did provided us with a great picture taking opportunity instead. Worth every minute of the wait in the heat of the day.

Beside being an appealing leopard photograph, well executed, I enjoy seeing how the textures and tones are repeated between the cat and the grasses. The remarkable resolution also helps to make the detail a pleasure to examine.

You can add your own comments on Tony’s photograph on the Critique section of ourDiscussion Forum.

FacebookTweet “Were I to die this moment, ‘Want of Frigates’ would be found stamped on my heart” Lord Admiral Horatio Nelson With apologies to Britain’s