Of the many technical concepts in photography that flummox photographers, flare does not rank very highly. We all believe we have a pretty good idea of what it is — non-image-forming light coming through the lens. (As such, it’s distinct from "fogging," which refers to extraneous light that gets to the film from some other source.)

Flare, however, when we consider it more carefully, is a remarkably fugitive concept. First of all there are two main kinds: "veiling glare," which is an overall cast or softening of contrast, and "ghosts," which are more localized marks and reflections. Both are "flare." Yet, as with the technical names of clouds, sometimes it’s not exactly clear which kind a particular incidence of flare actually is.

Because of the myriad ways flare can manifest itself, a lens’s susceptibility to or resistance to flare is impossible to quantify. Flare is unmeasurable, and sometimes invisible! That is, sometimes people don’t correctly interpret it, and sometimes it’s not blamed for problems it in fact causes — for instance, if a black-and-white negative is evenly fogged with veiling glare, and the printer "prints through it," increasing the paper contrast, the flare could be causing a lowering of overall image quality without signaling to the photographer what’s wrong. And flare can directly affect other basic measurements such as film contrast and edge acutance.

Some true lens connoisseurs believe that a small amount of flare is beneficial, for the same reason that "pre-exposure" is — it raises the threshold values of the shadow areas and makes it easier for the film to record shadow detail, without affecting the highlights (for a good explanation of this effect, see pp. 119-123 of Ansel Adams’sThe Negative).

Causes of flare effects can also be maddeningly inexplicable. They can be caused by odd internal reflections in the lens or camera even in situations where the photographer is not on the lookout for flare. I had a friend who shot with a particular brand of medium-format camera. With a wide-angle lens, every now and then a strange half-moon shaped form would show up on one of his negatives. He worked for months trying to track down every conceivable cause: he checked processing, film batches, looked for crimps on the negatives, got a replacement lens from the manufacturer, ran test after test. He never did figure out what exact light conditions were causing the maddeningly mysterious flare mark, and he ended up being so annoyed at losing pictures randomly that he got rid of the lens.

Here are three of the toughest seat-of-the-pants trials for flare that I routinely perform on an unfamiliar lens to get a basic idea of how it handles flare:

1. The obvious one is the into-the-sun test. With sunlight directly shining on the front element of the lens, at a small aperture, check for ghosting or shaped areas of veiling glare. This is probably the major failing of the otherwise excellent Leica 50mm Summicron-M, which flares too readily in this kind of situation.

2. A tougher test even for a good lens is the "window test." In an interior, with the lens close to open, place a large, much brighter area such as a big outdoor window just out of the lens’s field of view. One of the most flare-resistant lenses I ever tried, the 35mm Leica Summicron-R, could make pictures of the sun with remarkably little loss of image quality, yet it could be undone at f/4 with the window test.

3. The "squirrel on a branch" test. Make a photograph of something slight or thin, but that contains detail, against a bright sky background, with no light sources or directly-impinging light rays on the front element, and see how much contrast loss there is, especially at the boundaries. A bird or a squirrel on the branch of a tree makes a good test subject, because you can compare the subtle loss of contrast in the branch with the better-protected trunk of the tree, which will show less flare loss. The Pentax 43mm Limited was the best lens I ever encountered at this test. The superb flare control of this lens probably partially accounts for its amazing ability to record microdetail. 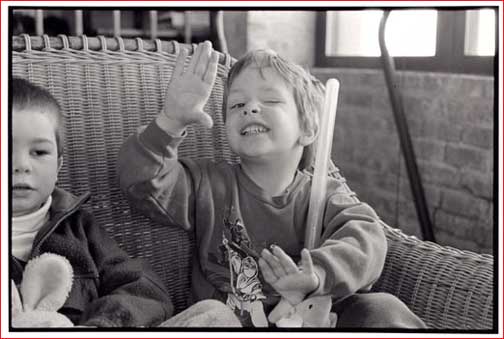 Here’s an example of common flare degradation in a snapshot. This one picture in a sense serves as "the window test" and "the squirrel test"— the window test because the windows on the right have caused veiling glare and contrast loss on the main subject (still printable, of course — this is an uncorrected work print), and the "squirrel" test by virtue of the obvious loss of information at the boundaries of the curved metal pole that passes in front of the window (see detail below). This is the Leica 50mm Elmar-M at one stop down.

By the way, a common misconception about lenses is that you need the longest possible hood to protect the lens. This isn’t necessarily so. With some lenses, acutely-impinging light is the biggest cause of flare, more so than more directly impinging light. A short lens hood which protects the lens from this glancing sidelight will serve well to reduce flare, even though it’s relatively useless at protecting the front element of the lens from direct light rays.

The Aesthetics of Flare

Many lenses are well-protected from flare these days (and lens coatings, which reduce flare, have more effect on the overall performance of a lens than most people realize. (Of current makers, Pentax and Zeiss have the best coatings). However, all lenses flare. If you haven’t seen it happen, you either haven’t used your lens in enough different situations, or you haven’t looked closely enough at your pictures.

Despite its status as a technical failing, however, lens flare can be a distinctive part of the "signature" of a lens and it can be utilized successfully in pictures (or at least enjoyed by savants who have the perceptiveness to see it and the knowledge to know what they’re seeing). Complex areas where the evidence of flare is plentiful can be quite pretty. With most of my favorite lenses, I would have to say that they way the lens handles flare is one of the factors that makes it appeal to me. Note especially how bright specular reflections are coped with, and how delicate lines or small objects go in an out of visibility against backgrounds of varying luminances. 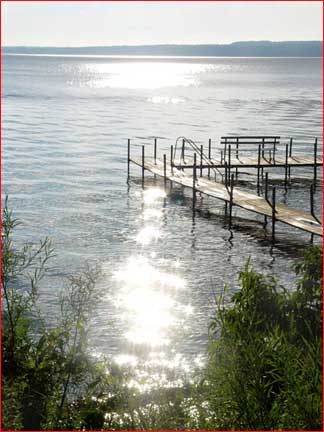 Here’s a very good zoom lens on a digital camera, the Zeiss lens on the remarkable Sony F-707/717, in a flare-inducing situation. Although flare is readily apparent, its character and nature is essentially pleasing and adds to, rather than detracts from, the charm of the picture, at least in my opinion.

Like every other imaging characteristic of a lens, flare is not necessarily a disadvantage. You just need to learn how your lens handles various flare-inducing situations so you have an idea what to expect, and so you don’t get let down by nasty surprises.

Next Week:"Pentax Under Glass." The venerable cameramaker Pentax has announced that its first DSLR will be unveiled at PMA. Why a Pentax DSLR, and what will it be like? Whatshouldit be like?

Happy Sunday You'd think a guy like me would have published a book by now. I have books in my bloodstream. I've always read, hoarded,