On the first of two workshops which I conducted in Iceland in July of 2004 we stopped one morning atThe Black Churchon the Snafelsness Peninsula. This unique church is located next to the ocean, with a waterfall on the hillside behind it. We spent about an hour shooting in the area, and part-way though our time there a couple of cars drove up. One contained a middle aged woman who opened the locked church, while the other had a young couple with a child. 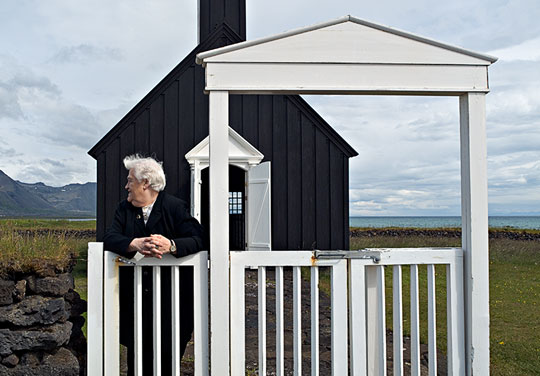 A few members of our group who were shooting architectural shots of the church at the time were quite taken with the woman’s appearance — her white hair and black dress, which mirrored the tones of the church itself. It turned out that she was the church Warden and was there with the family to prepare the church for a wedding ceremony later that afternoon. She spoke no English, but the couple did, and one of our workshop members asked through them if the Warden wouldn’t mind posing for a portrait with her church. She was quite gracious, and agreed to do so.

This powerful portrait resulted, and it is one of my more satisfying photographs from this Icelandic adventure. When doing landscape photography in that country one rarely has an opportunity to photograph people. The countryside outside of Reykjavik is sparely populated and opportunities to interact with locals is limited.

Several of us took down her mailing address and will be sending her prints of the photographs that we took. 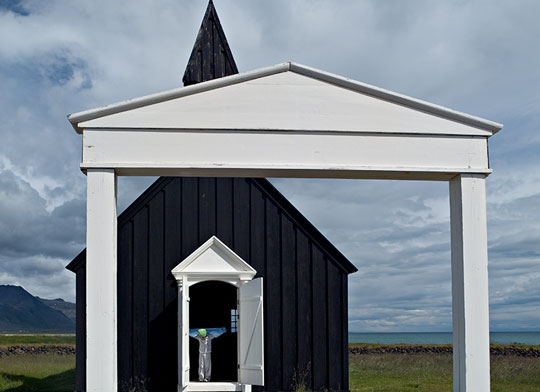 While the Warden and the couple were setting up the church for the wedding their young daughter amused herself playing in and around the church. At one point as I was framing a photograph of the entranceway (the framed gate is a standard feature of Icelandic church architecture), the little girl stood in the doorway for a moment with her arms outstretched. It lasted for just a second, but my camera was set up and I instinctively took a frame.

The symbolism of her posture was of course unconscious, but it added a sense of completion to the composition. This is my most prized photograph from the three weeks I spent in Iceland in 2004. 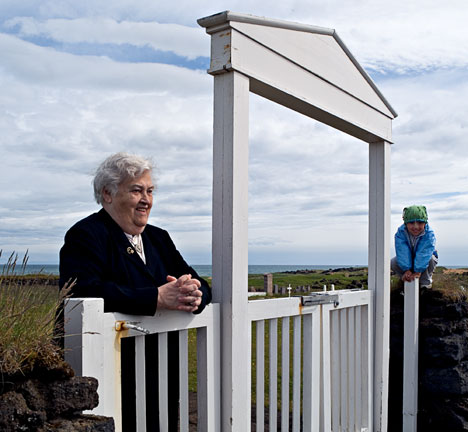 At one point as we were photographing the Warden, the little pixie child hopped up on a post, just out of frame to see what all the excitement was about. I reframed, and caught the two of them with the child looking like nothing so much as a grinning Icelandic architectural gargoyle. A somewhat less compelling photograph than the other two, but with its own charm nevertheless.