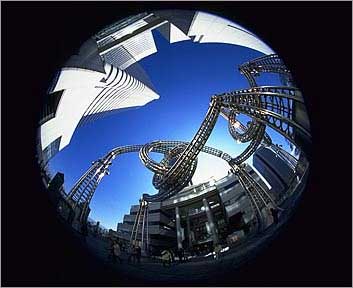 When I was a teenager in the 1960’s the hottest new lens was the “fisheye”. These produced a circular 180 degree image. Though they had been available for at least two decades prior (used primarily for scientific / meteorological applications), it was Nikon’s 8mm f/8 fisheye lens of 1962 for the Nikon F that really started the excitement. Though very expensive it provided photographers with a unique new “look”, and was the subject of much discussion in the photographic community.

Other manufacturers quickly followed, prices dropped, and it wasn’t long before Spiratone had a screw-in accessory adoptor that produced a fisheye look for under $100.

But the appeal (or at least the uniqueness) of circular fisheye photographs soon waned, and though they’re still around today they aren’t seen very often. (Thank goodness).

Up until 2001 when Voigtländer brought out its 12mm f/5.6 Heliar lens in Leica screw mount the widest 35mm format lens available was the 14mm. (This still is the widest focal length for SLR cameras). These are available from Nikon,Canon, and various third party manufacturers like Sigma and Tamron. A 14mm lens provides a 114 degree diagonal field of view. (The Heliar covers 121 degrees diagonally and it requires an auxiliary viewfinder rather than offering TTL viewing).

Such lenses are what is described asrectangular. That is, they produce images that render straight lines as straight, whether these are at the middle top of bottom of the frame. As long as the camera is level objects are rendered with proper perspective, though of course being very wide angle lenses there is near-far distortion and exaggerated perspective.

There is a third alternative though‚ the 15mm or 16mmfull-frame fisheye. Like the circular fisheye lens its coverage is 180 degrees, but instead of producing a circular image with 180 degree coverage ineverydirection it produces a full-frame image with 180 coverage on the diagonal. These lenses are made by Nikon and Canon and also by third party manufacturers like Sigma.

Living with Distortion‚ Not!

This distortion can be lived with, and depending on the subject being photographic can sometimes be masked. But produce too many images with this “look” and after a while it becomes cliched and tedious‚ like any special effect.

But there is a place for these lenses in some photographer’s work. Even a 14mm lens sometimes isn’t wide enough, and when including a broad area is more important than accurate and linear perspective a rectangular fisheye can be just the ticket.

The first generation of digital SLRs, like the original Kodak DCS series, the Nikon 1D, D100, Fuji S1 / S2 and Canon D30 and D60 all feature an imaging chip that is smaller than a full frame 35mm. This means that any lens used on these cameras doesn’t cover as wide a field as it is capable of. The multiplication factor is either 1.5X or 1.6X. On a Canon D60, for example, a 14mm lens only provides the coverage of a 23mm lens. Wide, but sometimes not wide enough. (For more on the multiplication factor read Understanding the DSLR Magnification Factor).

A 16mm rectangular fisheye offers one form of solution. When used on a DSLR like one of the above the angle of coverage is reduced to roughly that of a 14mm lens on full-frame 35mm‚ about 114 degrees. Now we’re talking! This puts these cameras back in the wide-angle game.

But, there’s a price to be paid. The images suffer from barrel distortion. One can live with this, but it isn’t really necessary to do so because digital image processing offers a viable solution. Let’s see how.

There are several programs available for correcting barrel distortion. Before looking at ImageAlign, the software that I use and will be reviewing here, and also before we see what other alternatives exist, have a look at the frames below so that you develop an idea of what can be accomplished.

Figure 1was taken with the Canon 15mm f/2.8 lens on a Canon D60. The extreme barrel distortion of this type of lens is clearly evident, as is, of course, the tilt of the building due to the camera being pointed upwards.Figure 2shows the image after having the barrel distortion removed by ImageAlign.

Figure 3 shows the image with correction for the vertical tilt, and rescaling performed withinImageAlign, whileFigure 4was cropped within Photoshop.(All of this will be explained as we progress below).

Clearly the software does the job‚ and more. It also does its tasks with simple and intuitive controls, and quickly. What’s the catch? Other than cost ($300), not much, and we’ll see that there are less expensive alternatives available.

Figure 5shows a view ofBCE Placein downtown Toronto taken with theCanon 16-35mm f/2.8Lat 16mm.Figure 6shows how the Canon 15mm lens, after debarrelization withImageAlign. The purpose of this example is to give you a feel for the extra coverage of the 15mm, which here can mostly be seen at the top of the frame.

What this means is that with the combination of a 15mm rectangular fish eye lens and software likeImageAlignone is able to shoot ultra-wide angle photographs with digital SLRs having a 1.5X or 1.6X magnification factor. Furthermore, when used with a full frame film camera, or full-frame digital camera such as theCanon EOS 1DsorKodak DCS Pro 14n, super-extreme wide-angle photographs are possible‚ ones with 180 degree diagonal coverage and no barrel distortion.

All of this has been preamble to a look at theImageAlignsoftware, published byGrasshopper Softwareof New Zealand. At the end of this article I will provide links to some of the other software solutions that are available. I have not tried them all, but I have looked at several.ImageAlignwas the one that I selected, and while it is the most expensive at U.S. $300, I have found it to be the most powerful, flexible and easiest to use of all the solutions that I’m aware of.

One way of rationalizing the cost is to see the price as being an intrinsic part of a package with the lens that you buy. Since such lenses can’t be made without barrel distortion, by adding this software you’re able to correct this on your computer. Make it a mental package deal.

You’ll also be pleased to learn that as of September, 2002 when you download either the PC or Mac plug-in version you receive the full stand alone PC version as well, and also the plug-in version for the other platform. In other words, buy the PC plug-in and you’ll also be able to download for free the PC stand-alone versionandthe Mac plug-in version. For anyone that uses both a PC and a Mac (as I do) this is a real money saver. I wish more software companies did this.

Figure 6 shows before and after of a shot taken at Toronto’s Union Station, again with the Canon 15mmon aCanon D60. Below is the Windowsplug-in’s main (and only) screen. 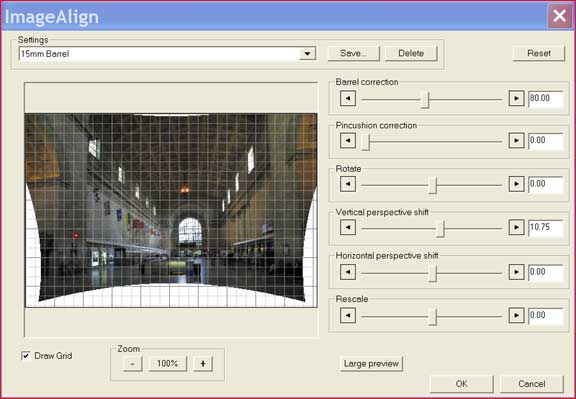 Down the right-hand side of the window are 6 slider controls. You can either slider the center block, click on the arrows or enter a number to change each one. You’ll see that a value of 80 is entered for the barrel correction control. This is the standard amount needed to correct for the barrel distortion that’s produced by the 15mm Canon lens on a camera with a 1.6X multiplication factor.

Notice that at the top, under theSettingsheading, it says 15mm Barrel. This is a named setting that I’ve created, and every time I want to make this same adjustment for shots taken with that lens I just load this setting. Various settings can be combined and named.

Rescale allows you to expand the image so that the white spaces created when perspective is corrected can be removed.Grasshopper claims in their documentation that this is superior to cropping the image in Photoshopafterward. While this appears to be true, it can sometimes be preferable to not use it, as seen in the difference betweenFigures 3and4above.

As you see in theFigure 9screen shot there is a grid that can be turned on and off, which aids in aligning elements within an image being corrected. The image can be zoomed and panned and a larger preview can be viewed.

That’s basically it. The program is simple to use and does the job elegantly and effectively. Deceptively so. In fact, so much so that when you try to achieve the same corrections with other programs you wonder what’s wrong, and why they make it so difficult.

While I have concentrated above on testing and describing using a 15mm rectangular fisheye and adjustment software to overcome the small imaging chip limitations of first generation digital SLRs, indeed these lenses have tremendous use on full-frame film cameras as well as the latest full frame digital SLRs such asCanon’s EOS 1Ds.

Above is an example taken with the Canon 1Ds. You’ll notice that there has been a slight shift in the image that eliminated the extreme left-hand tree, but which has otherwise removed the barrel distortion. The last little bit of curvature in the tree at the left could also have been removed if desired.

This type of astrophotograph demands that as much of the overhead sky as possible be included. The horizon appears level and only the fact that there’s some tilt to the tree on the left (caused by pointing the camera upwards) gives away that this is anything but a straightforward wide angle view.

To anyone who grew into photography before the 1980’s thinking that a 21mm lens was very-wide angle, today’s 14mm primes and 16-35mm zooms are a marvel. But try a 15mm rectangular fish-eye and be ready to bereallyimpressed.

PanoToolsi s a free program that is very powerful, but difficult to use. It’s use is made easier with PTGui, a Windows front end that makesPanoToolsa bit more friendly. It costs $40. This article describes how to use these tools.

Lens Corrector fromPower-Retouchesells for $54 and can also be purchased as part of a larger package of image processing utilities.

The Imaging Factory has two products,DebarrelizerandPerspective, each available for $39.95.

Picture Window Pro as well as other mainstream image processing programs also have various forms and degrees of capability in this area. You’ll need to do some research on your own to determine what best suites your needs and budget.

As for Fisheye lenses, Popular Photography has a chart which lists everything on the market as of February, 2002.

Please note this is an older article and some links may not be active any longer or outdated.