Just to be Contrary

As you may know, I’m a CIT (curmudgeon in training). As part of my program, I have to periodically post grumpy, contrary blats that go completely against the grain of popular opinion.

I’ve been disappointed in recent years by the photo shows, but man, this past PMA takes the cake. The biggest stories were whowasn’tthere, and the rumors about Leica going under the waves again. Apart from the Canon Rebel replacement, there was virtually no significant news out of this show. Oh, I suppose the fact that the D2X showed up for some limited hands-on, but it’s not like the D2X is news. Unless you’re one of those who got to get their hands on it.

I can’t muster much excitement over Canon’s EOS 300D / Digital Rebel replacement, called the EOS 350D or Digital Rebel XT, either. Why? Well, here I go again. According to the announced specifications, its viewfinder magnification is .8X. This is said to be slightly less than the magnification of the 300D viewfinder, which was given as .88X. The 300D has a "prison window" viewfinder – which, as one correspondent put it, is like looking at a postage stamp at the end of a tunnel.

I know I’m always grousing about viewfinder size, coverage, and quality in this column, and I don’t mean to play the party pooper, but the viewfinder size of the EOS 350D isnothonestly represented as .8X. Sorry.

Viewfinder magnification refers to the size of the viewfinder image relative to what the eye sees. I hope it’s obvious that with an SLR, you can increase the size of the viewfinder image just by using a longer lens. Traditionally, therefore, SLR viewfinders have all been specified using a 50mm "normal" lens. For some unknown (?) reason (I assume it can’t possibly be something as craven as marketing obfuscation), DSLR viewfinders arealsospec’d with a 50mm lens, even though 50mm is nowhere near normal on a DSLR. To get the real, effective magnification, you have to divide the specification by the FOV crop, which in this case is 1.6. What this means is that the Digital Rebel XT has a viewfinder magnification of .5X.

This iseven worsethan the 300D’s .55X (adjusted) magnification. Given that the postage-stamp magnification of the 300D is probably its single worst feature, this isn’t good news. I am not aware of any film SLR – ever – with such a poor viewfinder.

Given that you must use the eye level viewfinder with a DSLR, this is a continuance of an already bad trend. Until consumers put pressure on manufacturers about this, there won’t be improvement. At the very least, you’d expect that manufacturers would leave bad features the same if they can’t improve them.

For more information about viewfinders in general, see:/sm-slrs-part-ii/

Okay, so that was the grumpy part. Here’s the contrary part: As the scales tilt in favor of digital, it’s a great time to buy – yes – a film camera.

Music playback gearheads, called "audiophiles" in some quarters (audiophools in others), are aware of a curious principle – I don’t know what it’s called – whereby classes of products improve to a markedly greater degree of perfection after they become obsolete. For instance, it took the age of the transistor to improve tube amps to their current state of wonderfulness. And turntables, cartridges, vinyl records and phono stages have never been better than they are right now. They’ve never been anywhere close to as good, in fact. I’m not going to get sidetracked into armchair philosophizing about the whys and wherefores.

– Leica a la carte: If you haven’t done so already, get to Leica’s website and play the a la carte game. Playing is even cheaper than the lottery and considerably more fun. Leica is offering to "build" a Leica for you to your own specifications. You can choose the finish, the cladding, the metering, the hardware style, the engraving, the type of rewind knob. Not only does this result in a Leica made just the way you want it, but the current Leica M offerings are conspicuously the very best in the company’s history.

True, the financial news for Leica out of Germany at this PMA was parlous. It looks as if Leica’s banks have cut its borrowing base, always a tough obstacle for a small company. Given that Leica has gone to the well to stave off distress several times before now, this may signal the you-know-what. Lord, I don’t think I have the strength to face a world without Leica – I’m just now getting used to a world without Deardorff!!

Here’s my perfect M. This is an option (so-called "anti-panda") that Camera Collector Extraordinaire Stephen Gandy, of cameraquest.com, thinks is particularly ugly, but hey, that’s the beauty of this program: you can have it your own sweet way. 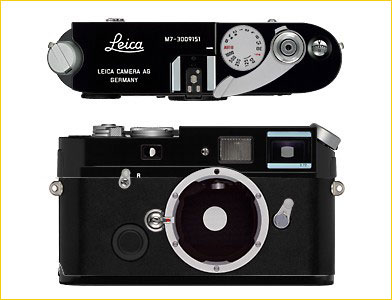 – The Arca-Swiss F-Line Field Monorail.http://www.bhphotovideo.com/bnh/controller/home?O=productlist&A=details&Q=&sku=116075&is=REGThis is the view camera without equal, IMNSHO. Slick, gorgeous, deluxe, and easy and fun to use, it is currently going for the near-firesale price of $2700, which is a good bargain, especially given that it comes with Arca-Swiss’s supple leather bellows, normally a $600 or so option. No, not everybody needs his or her "last" view camera (audiophiles are always going on about buying their "last" turntable – obsolete classes of products inspire this kind of talk), but if that’s what you’re wanting, this is a lovely candidate.

For more about Arca-Swiss, see Tom Westbrook’s information page:http://www.tomwestbrook.com/Photography/arca_swiss.html. While you’re there, take a look at some of Tom’s photographs, too.

And this goes with:

– The Rodenstock Apo-Sironar-S view camera lenses. View cameras have been obsoleted twice now, first by the advent of capable smaller cameras, and now by the advent of digital. So who needs view camera lenses? Too bad some people think this way, because the Apo-Sironar-S lenses are the most superb lenses you can buy for photography. And maybe the best that have ever been available for photography. My pick for a 4×5 camera is the 150mm ƒ/5.6 Apo-Sironar-S. It’s a nearly ideal lens: not terribly expensive, tiny and light, with the perfect angle of view and just the right amount of coverage for 4×5, and it has 3-D sharpness, a gorgeous, smooth tonality, andbokehto die for. The Apo-Sironar-S lenses are consistent up and down the focal-length range, so choose your own paragon and don’t worry about it, but FWIW the 150mm is where I’d hang my hat.

– The Cosina/Voigtlander R3A. In some very real sense, there is something about a small, mechanical camera that goes "snick"immediatelywhen you press the shutter button that is being actively lost in all these new wonderful eye-start, eye-focus, auto-focus, battery-dependent, multi-segment-metering technological degenerations. Why is it, exactly, that a Leica, or an FM3a, or a view camera lens in a Copal shutter is just plain more fun than all of the newfangled hoohah? I don’t think I’m being crotchety and outmoded here. Well, not entirely, anyway. I really do think the simple stuff is more fun.

– The Nikon F6. If Nikon were a person, it would be chuckling a lot lately, because it’s certainly inspiring more than its share of scandalized clucking and squawking amongst the wannabe masses. The digi-fora are full of teenagers crying that Nikon has gone crazy.

Right. (Yawn.) Well, surprise, surprise: the F6 is selling briskly (for a film camera!), and that’s because it’s easily the best F yet. Where this lovely thing shines is in its overall sense of coherence. The designers really took a hard look at every aspect of the camera. Again, and this is another thing I know I keep saying over and over, but, don’t judge it until you’ve touched it.

– Kodak Tri-X. Okay, so maybe this is a blatant, partisan plug for my favorite material, even if it isn’t one that digi-heads will find compelling. But remember that unnamed principle about things getting better just as they’re relegated to history’s dustbin? Tri-X is a case in point. A few years back, Kodak consolidated all of its black-and-white material production to one new coating facility, bunkering in for the long haul. In the process, Tri-X was the one film that got conspicuously better. Although it still has its classic look, it’s finer-grained and cleaner-looking than ever. For a balance of desirable properties, soup it in D-76 1:1; for fine grain, try Xtol. Scan if you wish, remembering that a film negative is still a much more robust and permanent image storage medium than an evanescent computer file full of 1s and zeros.

– On the used front, there are rafts of bargains out there right now. Don’t shy away from adding a few cherry older cameras to your shelf, because I have a feeling these things are going to go up in value eventually, and we’ll look back with longing on these days when so much cool stuff went begging. But for users, the bargain that stands out most to me at the moment is the Nikon F100.

The F100 is a superb used buy. Being a Nikon and being so clearly the near-pro, hyper-hobbyist body in the film lineup, it’s just the kind of camera that was lapped up in the thousands by well-heeled amateurs who love photography but may not get to shoot much. In that these are just the sort of folks who are offloading their film gear lately to finance the digital wallet drain, the used market is awash with good used F100s. $600 will get you a fine one almost anywhere, and I’ve even seen perfectly good ones dip into the high $400 range. The F100 might not be quite the perfect modern camera (that’s the F6’s role), but it’s the most perfect modern camera anybody’s ever been able to buy for five hundred bucks.

And as for PMA, I guess it wasn’t all a loss. Here is the entire list of introductions I think are at all significant or interesting, in order:

1. Canon D350 / Digital Rebel XT. Despite reservations expressed above, the most important introduction of the show.

3. Olympus’s super-cool new duo of ƒ/2 zooms for the E-series cameras. Constant-aperture ƒ/2 from 28mm to 200mm equivalent, for the first time in photo history I believe.

5. The updated D2Hs from Nikon. Still being 4 MP is a bit of a conundrum, but otherwise a wondrous DSLR.

As for what there wasn’t, there’s still no Nikon "D200" or whatever it will be called, the smaller version of the D2 series, meant to compete with the Canon 20D. (Come on, Nikon, remember the Contax N Digital! Timing is everything!) There’s still no dedicated black-and-white digital camera. There’s still no pocketable digicam with a 4/3rds or APS-C sized sensor (what’s holdingthisup?).

But hey, progress is progress, and I’m happy to see a digital prime and a full-size version of HP’s B&W-capable printer.

Next month, I think my mood will be sunnier. I’m going to start a "new tradition" (don’t you love that nice oxymoron?), "The First Annual 37th Frame Best Lenses Awards." And besides, I think I’ve met my training requirements for now. See you then.