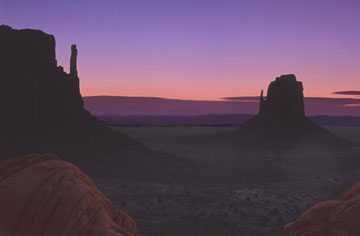 When asked by a tourist in Yosemite, "If you only had one day to spend here what would you do?" a ranger replied "If I only had ONE day here I’d sit down and CRY!"

Time is the key to all things. On this trip we had a total of six sunrises and sunsets to works with and the workshop was set up to take advantage of more than one at this particular location. I was taught a long time ago that photographing in the same place at different times, whether it be time of day or time of year, can be very rewarding. Things change!

Here, and the photograph below are two images taken from the very same location (the most spectacular in Monument Valley) at opposite ends of the day. It’s what I wanted the images to say that determined how they were made. In the predawn image above it was the color and cool stillness that made me want to feature the silhouette at close range. The second shot below, is the classic we came for. The spinning of the planet! The moon rising into a day of its own while ours was ending. 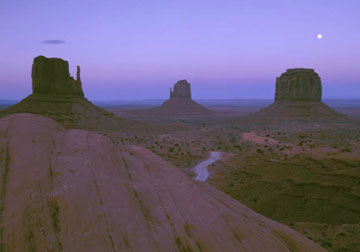 A strong foreground gave me what I always like to have in my images‚ a feeling that you can actually touch the texture of its contents. I like to have a foreground element so the viewer has no doubt what the rest of the image represents.

If you had been there you’d have laughed at me. I’m the guy that was popping a strobe (sometimes with a colored filter over it) seemingly at the Mittens from over a mile away! Laugh. I can take it. But, you may find as I do that if done right it gives a hint of color and detail to the foreground. 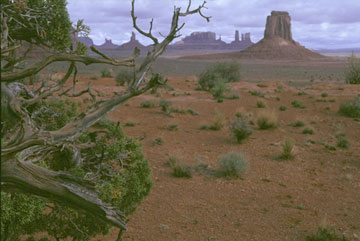 I’ve been in Monument Valley four or five times before.  I remember blazing sun and I remember howling winds.  I’d have never experienced anything in between. Our first day out was a treat! Without a strong sunrise the day unfolded with "nature’s softbox" and then gradually gave way to a "Western" sky.

It was the kind of morning that could have had a covered wagon train passing by, with John Wayne or Ward Bond as Wagon Master. At Artist Point a foot trail led down into the valley and afforded views into Utah. Hoping to interject some green into this stark desert image I used one of the few trees in the area to frame the beginning of a beautiful day.

Photographed with a Canon EOS A2E and Canon 28-70 2.8L lens with Tiffen Enhancer 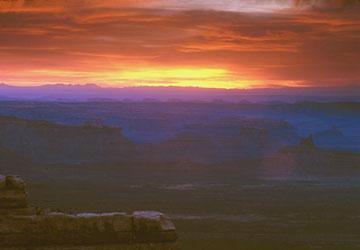 I thought the workshop members would like to see this. A road that comes out of nowhere and goes straight up. I talked about it a lot and not just because the name is so funny-sounding either. I’d been there a couple of years before in the summer, and with all the traffic and boats on trailers, and even motor homes that are not permitted (it’s gravel with a 10% grade and hairpin switchbacks), the place stuck in my mind. The one thing I mentioned every time I discussed it was "But there is no shot there." Well, maybe I was wrong …. partly anyway. This image violates a lot of my compositional rules. It’s too busy. There isn’t enough detail, and I’m not even sure of the focal point. But, I can live with it. It was the only composition I shot (and I shot it a lot), of the best sunrise the trip provided. So, to you I say, "Good Mokey" 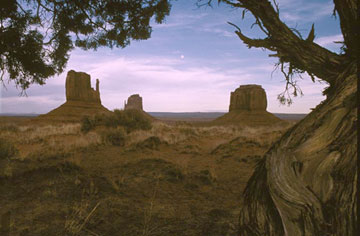 "Always hiding behind rocks." I frequently heard this on the trip. Angles and lenses are always a consideration for me. It’s not so much about what I want to include in the images so much as as it is about from where I want the image to be seen from. Before I set the tripod in it’s place I like to move a few feet or an inch in each direction and then slowly lower down to about knee level to see how the perspective changes.

This trip was the first in the field for me with the Canon 24 mm Tilt/Shift lens. It offers the 35 mm shooters the chance to have some of the controls as large format photographers. It makes it possible to change the perspective and also get unlimited depth of field at almost any aperture. It’s close focusing abilities open up a new dimension. The tree in front of me gave me the perfect situation to capture the detail of the bark at 12" while enabling me to keep the "Monuments" lines straight and not have them fall away. This lens is a great addition to my bag. 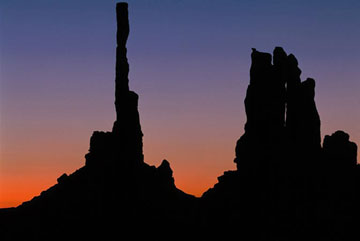 We kept coming back, over and over. Two sunrises and a sunset. We’ll do it until I get it right, I thought. It is one of the most photographed areas in Monument Valley. The full name of the formations are Totem Pole and Yei Bi Chei. I can honestly say that at sunrise or sunset I would be out there even if I didn’t own a camera. It’s that stunning. 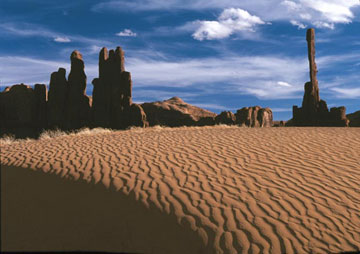 As much as I dislike crowds, "view points", and "the most photographed places", I’ve found that like most things in life they’re so marked because of their impact on people. In other words, the best. Just as you don’t want to visit the South Rim of the Grand Canyon because of the crowds, the visitor center was built there because it’s simply the best place to see it from. I have viewed many images made at the Totem Pole and some of the best were from the dunes. The drill was simple for me here. I wanted to make the best image I was capable of that said "The Dunes and Totem Pole."

Photographed with a Canon EOS 1N and 24 mm 3.5L T/S lens with a Singh-Ray Warming Polarizer

An additional portfolio by Steve Kossack can be foundhere.