I’ve never written a camera review much less a camera comparison. In fact I’d rather watch a Dr. Phil marathon than try to scientifically compare cameras, and even if I was capable or so inclined I don’t think it means very much unless the reviewer shoots in every imaginable situation from people to product, high iso to low iso, studio, location, mixed light, flash, hmi, tungsten, fashion, still life,  lifestyle . . . well you get my point.

But I can get caught up in cameras as much as anyone. Some I like better than others, though some I don’t like I use more than others, just because they are right for the job. So for the people that want to know if the Nikon D-3 is better than the Canon, the Phase, the Leaf, I’m absolutely zero help on this because I don’t find that it matters that much.

I always hear the phrase "horses for courses", and I guess that has some merit, but the cameras I truly love are the cameras that don’t stop me from working. Given this, I recently had the opportunity to shoot 7,401 frames with the new Nikon D-3, in Osaka during the AIF world track and field games.

Rarely do I shoot a project in this style  where I have just one chance to get the image. The majority of my work is large production fashion, advertising and sports, and usually every session is done in many multiple variations to eventually move to the right look. 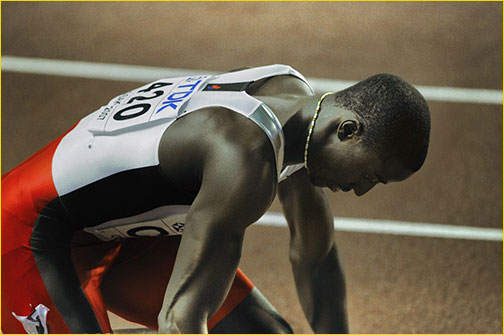 To give a little insight into my digital background, I began digital capture about 5 years ago.  Until then the majority of my work had been medium and large format film ,and since starting with digital capture have owned the Kodak 760, Fuji S2/3, Nikon D2x, Canon 1D, 1Ds, 1D MKIII, 1D MK IIN, Leaf Aptus 22, and the Phase P-30/P-30 Plus. My studios now manage over 60 terabytes of stored data.

For the record I personally like Nikons.  Something about them has always just clicked with me, and though the Canons and the Contax/Phase are cameras I continue to use and find good for my style of work, Nikons always feel natural to me.

Nikon Professional Services(NPS) arranged for me to test a D3 for the Osaka project ,and quite honestly I was somewhat skeptical and not really in the mindset to test a new camera during a paying high pressured project, especially since shooting raws was going to be difficult, as there is not a lot of raw processing options for this pre-release camera.

I had never shot a job on jpegs so I thought I would shoot a few frames, say nice camera and hand it back.

I was wrong.  I shot a few frames as a test, shot a few more, and over 7,000 frames later didn’t put the camera down until NPS asked for it back.

I NEVER shoot on auto exposure.  In fact I don’t think I have even used autoexposure on the Contax or Canons more than once, but since Nikon handed me this camera set on Auto I just thought I would see what happens, and it was dead on perfect, almost to the point I couldn’t trick it unless I was in extreme 5 stop backlight.  Set to Matrix metering it just completely surprised me how accurate it was.  From time to time I would moved the little +/- dial from .3 to .7 but usually the meter was dead on, even in mixed lighting. 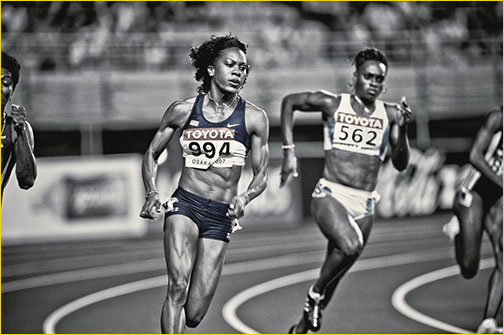 The viewfinder is beyond huge and makes my Contax look like a point and shoot.  Using a 300 mm 2.8 I did some testing of manual focus and hit it 9 times out of 10, which compares to the D2x and its cropped format where I can only hit manual focus about 50% of the time.

The LCD really is amazing (amazing is as understatement), and the closest I’ve seen to a good computer screen.

Auto focus on the D3 is very fast, very accurate.  It just snaps and holds the subject.

There are many multiple focus options, even one set to recognize color, and it probably would take a week of heavy testing to master all the possibilities. Regardless, I was in focus much more than 90% of the time, so I guess I was either luckily or I hit the settings straight away.

The menu system is intuitive.  It’s  easy to find the functions, set color, tone, and noise reduction. Compared to the  system of the D2x, or any camera I’ve used, it is the easiest system I’ve worked.

I shot the majority of this project set on standard color with a few slight adjustments and this was very close to the look of transparency film. But playing with the functions you can probably get close to any film look, from negative to transparency.

One interesting note is the camera has the ability to pick a standard setting and adjust from there, with color, hue, tone all in camera. Lock it down and shoot.  There is also another function where you can take shot files and make corrections such as D-lighting opening shadows and apply that to the shot jpegs or raw files as duplicates. 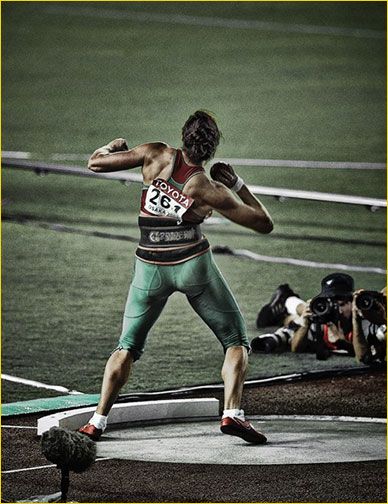 The noise of the D3 at high iso is about 2 to 3  stops better than the previous D2x.  Not like the Canon 1Ds2 where  it’s somewhat noise free but softer. It seems the Nikon looks a little sharper, but when noise does show (and it takes about ISO 2,000 before it really appears) it is more film-like that most digital files I have shot. (OK, now I am hesitant to use the term film-like, because I think film is a romantic notion of the past, but I think the D-3 hit the film look I prefer faster than any digital camera I have previously used).

The buffer is good and I rarely bounced it, (though I did shoot all on JPG).  The file detail seems very good, but I’ve never really been a 300% pixel peeper, and since most of this project was shot on high ISO of fast moving subjects I can’t really say that this camera has more or less detail than the Canon 1Ds MKII, though it does seem to have more detail than the Canon’s 1dMarkIIN’s I took to Osaka, which seems logical given the file size difference of 8 to 12 MP.

One very cool feature is the dual CF card slot, where you can shoot raws on one card, JPGs on the other.  For workflow this could be a real time saver because you can set your "film look" in the camera, shoot the jpegs to the other card, and download separately. This let’s you use the JPGs for web galleries without having to separate them from the raws. For the finals I "reprocessed" all the files in Adobe Lightroom to fine tune the color and look.

Once again this was unique for me as I’ve never shot a JPG job before, though the files held up and after a while I forgot that the original carrier was JPG, as I treated the images as if they were original raws.

Now the bottom line is – would I buy this camera?  Actually, I pulled out my Amex card three times and asked Nikon to sell it to me, and three times they declined. To me it really was that good – but as I stated earlier, I am predisposed to like Nikons.

If there is only one thing I would like Nikon to offer is more Megapixels, at least 17 preferably over 20.  For my work it just gives more options in cropping to full page verticals.

Is the Nikon D3 better than the Canons?  Who knows . . . who will ever know because we all shoot so differently and I didn’t actually compare the two side by side and probably never will.

I have to say that for the last few years Canon really has produced some amazing cameras, and I assume the next 1Ds MarkIII will be no exception, though Nikon is obviously back in the game.

On this site, the forums are ablaze with comparing the new Canon Mark III and digital backs, and I find this somewhat interesting and even amusing, as the MkIIIs is not out yet. But I think Nikon and Canon have given the medium format back makers something to think about.

DSLRs are just easy to use and this Nikon takes it one step further, with the big viewfinder, a hugely detailed LCD, and the ability to set so many film looks in camera. Medium format has its place, and will continue to do so, especially tethered in studio. But IMO, medium format really needs to address in- camera processing,  better LCDs, and easier, faster workflows. 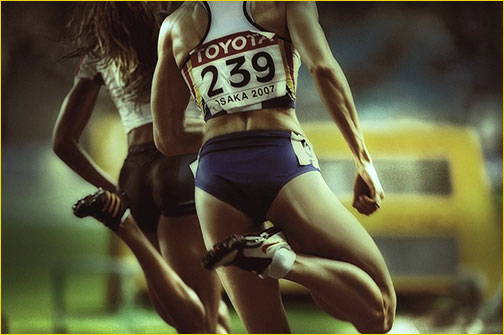 Like a lot of us, I work a lot, I travel a lot and though I move dozens of cases of equipment around the world. Having multiple cameras, learning multiple software with multiple work flows is a real pain, and a huge consumption of time.

This job in Osaka illustrates this. The day after the 8 day shoot, the client and the publisher needed to see the images quickly.  By first placing the D3 files inI-viewI did a quick edit and then took those edited files to Lightroom, which took just a few hours to adjust and reprocess to smaller web jpegs.

The corrections were minimal, mainly because I could get so close to the look I wanted in camera, something that medium format doesn’t really allow.

I had this job up on-line in a day, and had I gone into this with 7,000 medium format files, even using a software as stable and robust as capture One it would have taken twice that amount of time.

For now I won’t post any hi-res images as this is a pre-production camera and it will invariably open up the comparison discussions.  The images I furnished Michael for this review are just small references and have been heavily worked in Photoshop for my clients final reproduction.