Reviews and commentary on various wide-format and panoramic cameras can be found by clicking on the links to the left or on the hyperlinked names below.

For years I thought that panoramic image presentation was invented by Hollywood — Todd-A-O, Cinemascope, Panavision and their ilk.  I was disabused of this misconception many years ago on visiting thePradomuseum inMadrid.  I was stunned by a number of huge paintings with aspect ratios of greater than 3:1 — some seemingly as much as 6:1.  These paintings were from 200 to 400 years old.  Who knows — there may be panoramic cave paintings.  Panoramic photography has, of course, a long history as well — going back to so-called banquet cameras with rotating lens used for group portraits.

There is a sub-cult in photography that considers anything less than 360 degrees to not betruepanoramic photography. I’ll leave them to their pastime and focus here and on the linked pages instead on equipment reviews relating to gear that mainstream landscape photographers might be interested in.

Panoramic cameras fall into two main classes —fixed lensandswing-lens. Among the cameras in the first category which I currently use are theFuji G617andHasselblad XPan, while theNoblex 150UXis one of the latter. 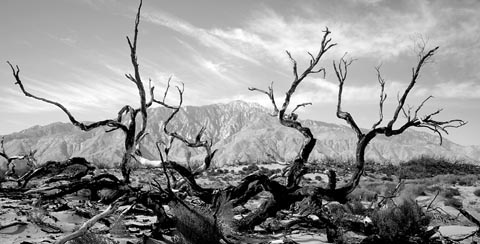 A description of the making of this photograph can be foundhere.

In reality any camera can be used for panoramic wide-format photography.  Just crop the final image to a wide aspect ratio when printing.  This is simply what the panoramic switch position on APS cameras does.  But, a true wide-format camera like the Fuji 617 or XPan gives you a much greater film area to work with.

For example, the Fuji GX617 produces a transparency equivalent to roughly half of a 5X7" sheet film, while the XPan creates one that is about half of a 6X7cm frame.  Both cameras are significantly smaller and less massive than their larger cousins, and though both are true panoramics neither necessarily take "wide angle" images since they have interchangeable lenses.

Taken with a Hasselblad XPan and 90mm lens on Provia 100.

Both the XPan and Fuji wide-format cameras present problems to those wishing to scan their film. While those still using enlargers simply need to use an enlarger capable of handling a film of that size, and then masking down the frame, users of scanners don’t have as simple a solution as that.

Film scanners come in two main types, 35mm and medium format. AnXPanorNoblextransparency can be handled in a normal 24X36 scanner like those fromNikonorPolaroidby scanning the frame in two halves and then stitching them together. Most image processing programs have such a function (PhotoStudiohas a particularly good one) and all programs with Layers, such asPhotoShop,can also do the same thing, with a bit more work.

The trick is to use the "film-strip" carrier and, using a sharpX-actoknife cut away the thin plastic divider between frames. Scan the left side of the frame and then moving the carrier to the next frame scan the right side. Just be sure to slightly overlap the sections. Also, make sure that your scanning software doesn’t change the exposure when scanning the second side. Set the software tomanualexposure. This will make merging them a much easier task.

A Fuji 617 negative could be handled in the same way in a medium format film scanner, but at least 3 separate scans would be required. Also, most of these scanners would physically "choke" on a piece of film that size since "film-strip" carriers don’t exist for 120 film.

For a negative or transparency this large a flat-bed scanner can do the job well. The reason for this is that you’re dealing with such a large piece of film that only comparatively low resolution is needed. 1,000 DPI should be fine for most applications. Just be aware of the need to hold the film flat against the glass and to avoid Newton Rings if a glass cover sheet is used.

I’m fortunate to now have anImacon FlexTight Photoscanner. This desktop drum-type scanner can handle any film size up to 60 X 180mm at a true optical 3,200DPI, with a DMax of 3.9. Spectacular quality. But, I had to upgrade my computer to be able to handle Fuji 617 scans. At this size and resolution a full-frame scan produces a 375MB file and takes 30 minutes. Even with a 600Mz Pentium III with 678MB of RAM PhotoShop slows to a crawl. Don’t even think about using Adjustment Layers!

But, a scan like this can produce a print almost 5 feet wide by 2 feet high at 300dpi. Hummm. ALightJetprint this size is only a couple of hundred dollars. There’s a thought.

The above image was taken with the Fuji 617 without the center ND filter. This center hot-spot is quite visible, particularly at the top of the frame.

Cameras like theFuji 617(with 90mm or 105mm lenses) andHasselblad XPan(with the 45mm or 30mm lenses) need to use Center Neutral density filters. It’s virtually impossible to design very wide angle and wide coverage lenses that don’t exhibit light fall-off at the corners of the frame. For many types of shots this fall-off isn’t that noticeable, but for ones like that above the hot center of the frame is clearly visible and degrades the image.

While I almost always use a center ND filter there are times when losing a stop or more is problematic and other times when I simply have forgotten to put the filter on — such as in the frame above.

PhotoShopto the rescue. Here’s a simple recipe for creating a digital center filter:

This picture is from the transparency shown at the top of the article but with the technique described applied to it. A larger version can be seen by clicking on this picture.

While using a center ND filter at the time of shooting is preferable, this technique can easily save an otherwise compromised exposure.

This outlook point overlooks theSan Juan Riverat a spot called theGooseneck.The river takes 5 miles to cover just a single mile with five loops. It presents a unique problem for the landscape photographer. There is nowhere to get the elevation needed to take in this magnificent scene, regardless of how wide the lens being used.

For this shot, taken with theFuji G617and its 105mm lens I included a bit of the foreground ledge on which I was standing so as to provide some depth perspective. Have a look at the enlarged version by clicking on the frame above. Though displayed here at 96 DPI it was originally scanned at 3200 DPI producing a 367 MB file. Remarkably, at a magnification equivalent to a 5 foot wide print one can see rafts on the river and can count the people in them.

Wonderful panoramics and composite images can be created with any camera —ifthe right software is used.PowerStitchis currently the most powerful product on the market for compositing images. This review is a must-read if you’re considering this approach to panoramic  photography.