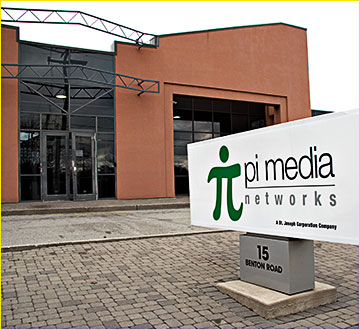 It’s been about 30 years since I worked in a commercial photography studio. Some things have remained the same, but many are now quite different. Most readers have likely never seen what goes on inside a major commercial studio, and so when I was asked if I would like to tour one of Canada’s largest commercial studios and to see what makes it tick, I was very pleased with the opportunity.

The reason behind the visit was that one of the leading U.S. commercial photo studios was visitingPi Mediato see how they had managed the transition from film to digital.Pi Mediahad made the move in 1998 and therefore had some six years of experience with a complete digital workflow. 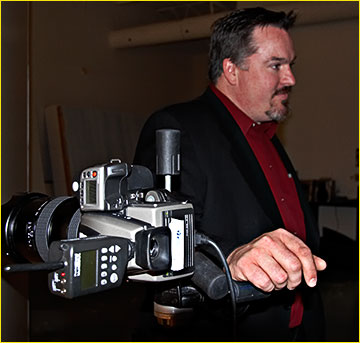 Our host was Gary Maclean,Pi Media’sDirector of Photographic Operations. Gary has been with the company since 1995 and had been responsible for the transition to digital.

First, some background information aboutPi Mediaso that you have some sense of the scale of the company’s activities. They occupy two buildings in suburban Toronto, with a total of 200,000 square feet of studio and post production space.Pi Mediaemploys some 400 people, including 40 photographers, as well as set decorators, graphic artists, hair stylists, carpenters, painters, layout artists and the like.

Their clients includeSears, for their catalogs and indeed all of their print material, and also many of the country’s leading publishers of catalogs.

One of the things that makesPi Mediaunique is that they don’t just do the photography, but also all of the post production, right up to the final PDF file that goes to the printing press operator. This means, of course, a completely managed workflow.

The workflow begins months before the shoot with discussions between the client andPi Mediahigh level creative staff, when the creative direction for the project is planned. The theme of the shoot is established, and the delivery of products to the studio is scheduled. Everything is worked backwards from the date that the catalog has to go on-press. 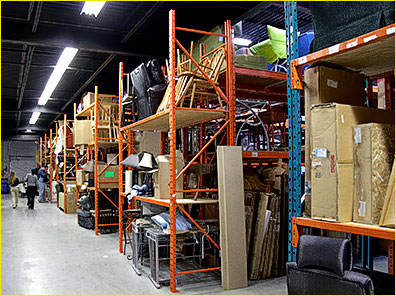 Products Waiting to be Photographed

From that point forward every aspect of the shoot is planned with military precision. Products enter the warehouse and are tagged with UPC codes, so that their where-about’s can be tracked throughout their stay in the facility. Photographers are provided with shot lists and layouts. Set decorators and props specialists are scheduled, and in the case of live models, in-house makeup and hair stylists are scheduled as well. Production planning is every bit as complex and organized as a large Hollywood feature film shoot.

Pi Media’sforty photographers all work exclusively with Phase One medium format backs on either Hasselblad H1 or Mamiya RZ camera bodies. The backs cover several generations, including some twenty H5s, nine H10s, eight H-101s and three H20s. Since almost all of their studio work is with Elinchrom electronic flash, each camera is also equipped with a Pocket Wizard wireless transmitter. Each photographer also has his or her own mobile workstation, consisting of a Mac G5 (or G4) and a Lacie Electron Blue calibrated monitor. 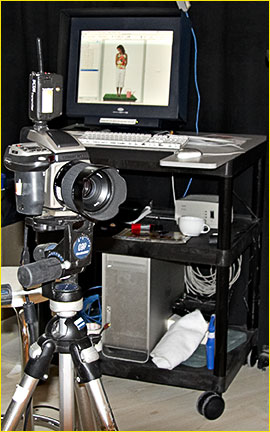 ThePhase Onebacks are connected by Firewire cables to the workstations, and the workstations are moved to the particular studio and set that the photographer is working in that day. As part of the completely managed workflow, colour management is done in reverse; from the CMYK profile required by the particular printing press that the job will run on, right back to the profile that is loaded into the Capture One software on each photographer’s computer. 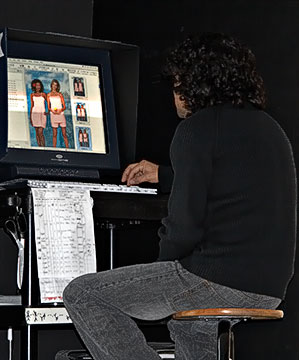 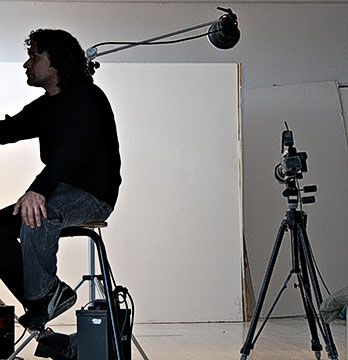 A photographer reviews his shoots and edits his files prior to submission.
The workstation is immediately adjacent to the set.
All workstations are connected by Gigabit Ethernet to a central server.

Once the shots have been taken, and adjusted as needed by the photographer and stylist, they are downloaded over Gigabit Ethernet toPi Media’s central file storage facility. From there, using proprietary image management software, post production staff convert the files to CMYK, and merge the images with text and other layout objects into a final catalog page. The client can remotely log on to this server and follow the progress of the images and pages throughout the process.

Once the pages have been proofed, and the entire catalog completed, the pages are converted to PDF files and sent to the printing plant. No colour separations. These are a thing of the past. With the exception of page proofs, the fully calibrated and profiled Lacie (and some newer LCD monitors) are what’s used to judge image quality, from the camera though to the final printing stage.

It’s worth noting that none of the photographers that we talked to use light meters or flash meters. The universal comment was that judging the on-screen histogram was a much superior method of judging image quality, and just as fast.

Because these cameras and backs are used in tethered mode, with an image appearing on the workstation monitor seconds after it is taken, the photographer and stylists tend to use the large screen for judging lighting, composition and for making other esthetic image judgments, rather than the camera’s viewfinder. Capture One’sComposition Modeis used for this to preview the image as often as necessary, without it taking up any disk space.

In 2004Pi Media’sphotographer shot more than 125,000 products. I have no idea how many individual photographs this represents, but as you might imagine this requires Terabytes of storage, and a massive file management challenge.

But, what was clear from watching the photographers and other crafts at work, was that quality as well as production efficiency was in the forefront of everyone’s minds and activities. 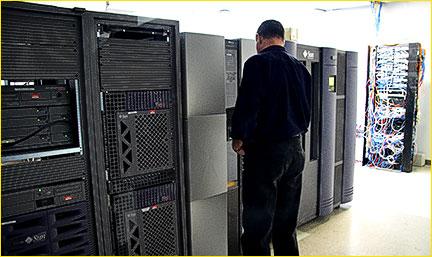 And You Think You Have a Lot of Disk Storage!

This in fact was one of the reasons behind the switch to digital, and away from film. Prior to the move to medium format digital the company’s photographers shot 8X10" and 4X5" sheet film, as well as some 120 roll film when on location. There was an in-house E-6 film lab, and drum scans were made. Today,Pi Mediagets what they and their clients perceive as superior image quality along with much enhanced efficiencies from a completely digital workflow.

The needs and work practices of a large commercial studio are quite different than those of many other types of photographers. Here are some random observations based on several hours chatting with Gary Maclean as well as several of the photographers atPi Media.

– repairs are not as big an issue as one might think, with forty photographers working long hours, day in and day out. For example, of the Phase One digital backs in use over the past seven years, there have only been seven repairs, an average of just one a year, out of some 40 cameras in daily use.

– the relationship with equipment vendors is critical.Pi Mediahas purchased their Phase One gear as well as much of their other studio equipment fromVistek, a major Canadian pro retailer. Vistek’s sales reps have been a vital part of keepingPi Media’sphotographers trained and updated on the latest hardware as well as available software.

– there is less reliance on Photoshop than you might think.Pi Media’s photographers try to make the images as close to print-ready as possible in the camera and Phase One software. In other words, do it right up-front, rather than having to fix it in post-production.

– even thoughPi Media’s photographers are experienced pros, each one runs through a check-list each morning before their first shoot, reviewing their equipment and settings. The camera and the computer are a synergistic couple during tethered shooting, and no setting can be overlooked.

– new photographers are being constantly trained.Pi Mediaparticipates in co-op programs with two local colleges in the Toronto area –HumberandSheridan, both of which use Phase One digital camera backs as part of their curriculum.

How Much Storage Do You Need? A 1GB Microdrive can hold almost 300 RAW mode images and many hundreds more in the JPG modes. If