As photographers we all want magic solutions — the lens that’s sharper than any other, the 6MP digital camera that will outresolve the 11MP model that costs 5X as much. Or, the software program that will allow us to enlarge our files to huge sizes with no loss in quality. Psychologists call it "magical thinking", and most of us fall prey to it sometimes. Indeed manufacturers count on it when they try and sell you products that overpromise but underdeliver.

Extensis pxl SmartScaleis a USD $199 Photoshop plug-in (Mac OSX & Windows) that promises a lot — "Users can now scale images up to 1600% with no discernible loss in printed quality" — saysExtensis. But can the product really deliver?

SmartScaleis designed to allow image files to be scaled upwards. Why would one want to do this? Three reasons, usually. The first is because the original file is small or low resolution. Images taken with the 1 to 3 Megapixel cameras of the late ’90s needed to be "ressed-up" to make anything more than wallet sized prints. Today’s 4-6 MP digicams though produce images large enough for most purposes, so that the need to res-up is reduced from what it once was. The second reason is if a small segment of an otherwise normal sized file needs to be extracted and enlarged. The third reason is to take a typical file and enlarge it so that averylarge print, such as a poster or billboard can be made.

Installation is straightforward. But, I was disconcerted to see that instead of installing itself as a normal Photoshop plug-in, the installation process created a new top level Photoshop menu item betweenWindowandHelp, calledExtensis. SeeFigure 1above.

This is simply bad behavior. What if every product did this? That’s why Adobe has a top level menu item calledFilterwhich contains an area for third party plug-ins to be found. A negative first impression was immediately created.

WithSmartScaleyou have the choice of working on an image currently on-screen in Photoshop, or one that’s still on disk. The image is previewed and the menu palette seen inFigure 2above is available. You can choose how to rescale the image in a number of different ways; as a percentage, by absolute size or with a slider. There are also some quality choices available under theDetailmenu. More on these a bit further on.

Below is 20 MB image, cropped from the original 47 MB, 8 bit file, taken with aKodak DCS Pro16 Megapixel back on aContax 645, using aZeiss Sonnar 210mm f/4lens, using ISO 100, a heavy duty tripod, mirror lock up, optimum aperture (f/8), high shutter speed, and exact focus. Needless to say, image quality is superb, about as good as one can expect from current optical and digital technology.

Below are extreme enlargements done usingSmartScale, and alsoGenuine Fractals 2.0, the normal bicubic interpolation built into Photoshop, and bicubic again but using the 10% increment technique. (With this technique the image is ressed-up 10% at a time until the desired size is achieved. Some people believe that this produces somewhat better results than doing it in one shot). Note as well that the version ofGenuine Fractalsthat I have available is an older one. The current version is 3.0, but I can’t comment on whether it does a better job or not than the earlier V2.0. I would imagine that it’s either the same as or slightly better than the 3 year old version. 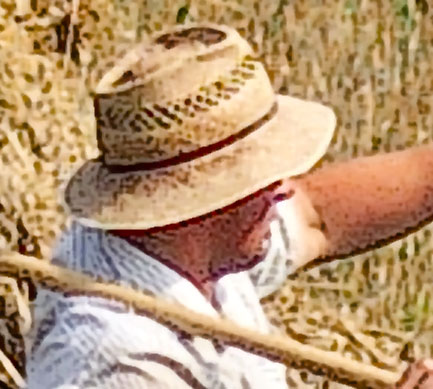 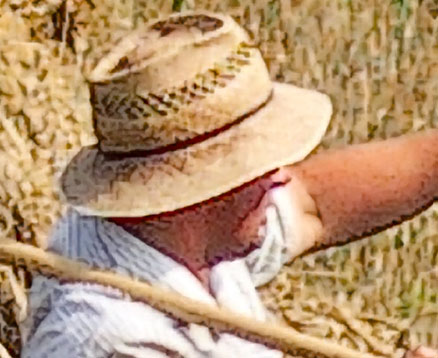 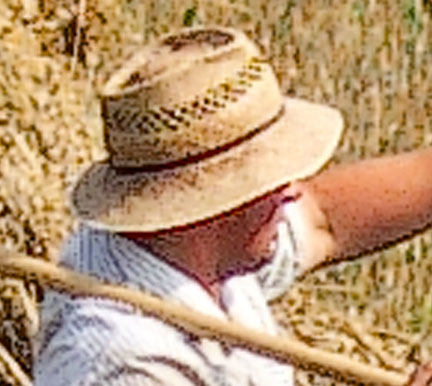 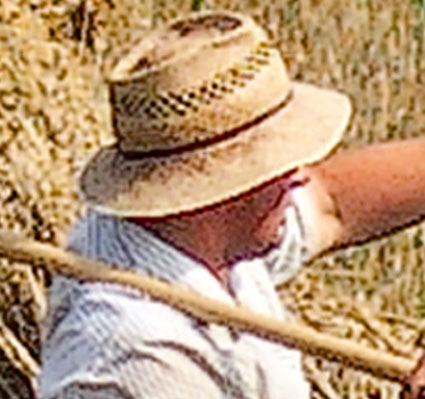 Below in Figure 5 is a version produced withSmartScale, but with the settings available under theDetailmenu adjusted to try and achieve a "softer" interpretation. 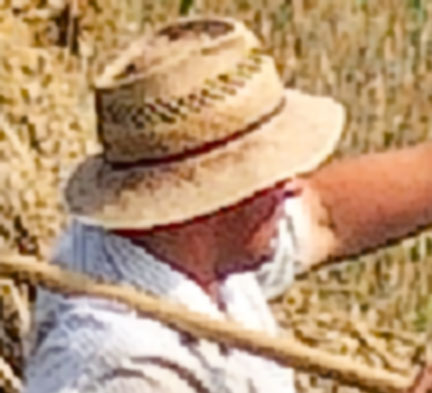 I experimented with these settings, following the manual as well as doing some free-form experimentation, but couldn’t do much to improve the image beyond what a bit of post-processingGaussian Blurwould have done.

What I see above, and borne out in several tests with other files at other magnifications, is that bothSmartScaleandGenuine Fractalsdo a slightly better job of ressing-up an image than does the built-in bicubic interpolation function in Photoshop. This can best be seen by looking at the rim of the hat where it contrasts with the man’s face. With bothSmartScaleandGenuine Fractalsthe edge is less ragged. Bicubic, and Bicubic with 10% increments look essentially identical, and both are not far behind the commercial products in image quality. Naturally, prints display pretty much similar results as seen with the web reproductions above. There’s no free lunch — not even when it’s expensive.

As shown above,SmartScaleandGenuine Fractalshave a small quality edge over Bicubic.SmartScale‘s advantage overGenuine Fractalsis that it works in a single step, without needing to save and then re-load the image in a special format.

Frankly, ifSmartScalecost under $50 and didn’t install itself in an inappropriate manner I might find itmarginallyworthwhile. But at two hundred dollars it is overpriced for what it does, or in this instance doesn’t do. With powerful and demonstrably productive programs likeNeatimageat $59, andFocalBladeat $49, to findSmartScaleat $199 when it doesn’t do an especially good job can only bring to mind the phrase —caveat emptor.