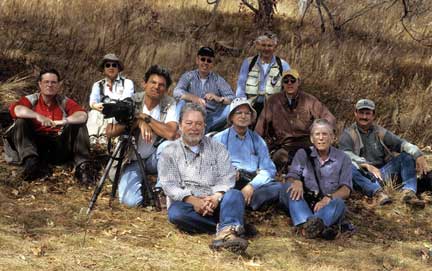 In late 2000 I spent a couple of months shooting in the mountains of Northern Georgia, Tennessee, and North Carolina. In planning my Fall 2001 workshop it therefore was a natural to chooseGreat Smoky National Parkand theBlue Ridge Highway.

This page gives a brief overview of the October 2001 workshop and some images that I produced that weekend. If you’d like to learn more about this fascinating localehere’s a good place to start.

As participants photographs become available there will be additional links placed here.

What if one held a fall colour workshop, and there was no colour? That’s what happened to my mid-October workshop inGreat Smoky National Park. Smoky is one of the world’s finest locations for fall foliage, with more species of trees than all of northern Europe.

Unfortunately a confluence of cold weather, rain (or lack thereof) and various other imponderable factors created one of the worst fall colour seasons in years. Nevertheless, having planned and anticipated our get-together for some six months, we met inTownsend, Tennesseeon a weekend in mid-October, and spent 3 days exploring the park as well as the lower 50 miles of the nearbyBlue Ridge Parkway.

Even without great colour this year this mountainous region of Tennessee and North Carolina never disappoints with its mountains, sweeping fog-filled valleys and fascinating waterfalls.

Even without the intense colours that a goodSmokyOctober produces there were abundant opportunities for enjoyable and instructive photography. I’m always partial to more subtle colour opportunities and this backlight tree inCades Coveis one such example. 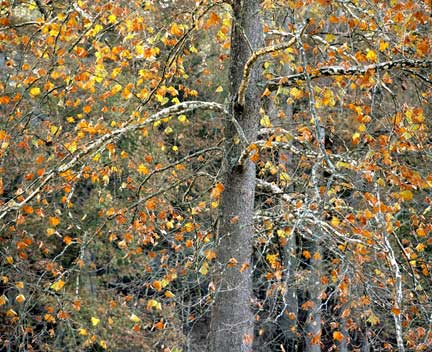 For me, the pleasure of conducting an in-the-field landscape workshop is meeting with and working closely alongside the participants. This was a great group, and we had a lot of fun both shooting together as well as spending some social time while driving between locations, at meals, and in the evenings.

Where did Michael say the shot was?

In addition to shooting inGreat Smokywe spent almost half our time during the workshop shooting along the lower 50 miles of theBlue Ridge Parkway. Before the workshop,Chris Sanderson, producer ofThe Video Journaland I spent 3 days driving the almost 600 mile length of the combinedSkyline DriveandBlue Ridge. Running from the outskirts ofWashington DCalmost toGeorgia, this continuous road is one of the most beautiful in the world. No stores, no billboards, no restaurants, no gas stations‚ nothing except a gentle two-lane road running through some of the most exquisite scenery in North America.

Though we drove through 4 States on our way south from Toronto we rarely saw decent Fall colour. It was a bad year almost everywhere along our route. Yet, a few places offered both some colour along with this sort of bucolic scenery.

The two mornings during the workshop that we shot from the Parkway didn’t offer much in the way of exciting early morning light, but at this time of year there is always fog in the valleys. These two frames were taken just a few minutes apart from nearby overlooks. 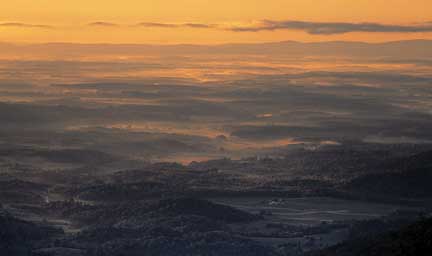 The massive cold front that covered most of North America that weekend produced some of the clearest skies I’ve ever seen in this area. But, when served a lemon, make lemonade. 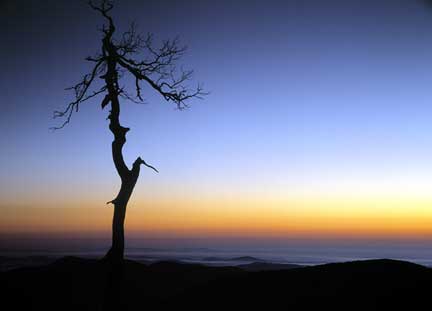 Sunday evening found us at a west-facing overlook on theBlue Ridge, not far fromWaynesville. This was the end of the workshop and we all hoped for a decent sunset. The Smoky’s famous hazy layered mountains were in evidence but the huge high pressure area that had dominated the continent’s weather pattern for several days continued to haunt us.

Just as the sun was sinking below the distant mountains it managed to illuminate some wispy clouds overhead, providing some interest in the sky. 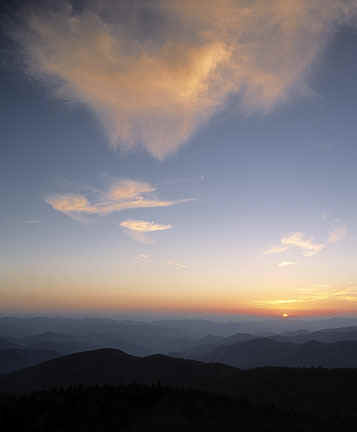 Seconds after the above frame was taken I switched from my Rollei’s widest lens, theSchneider 40mm Super Angulon(24mm equivalent) to my longest, theSchneider 300mm Apo-Tele-Xenar(180mm equivalent). These two frames were right next to each other on the roll. 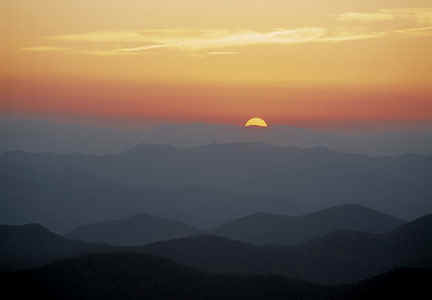 When sunset was over we slowly packed up and somewhat reluctantly drove back to our base of the previous two days, the town ofMaggie Valley. We found a great little Tex-Mex restaurant and closed out our four nights and three days together with some good food and drink.