The Future of Big

The History of Big – and Where Do We Go From Here? 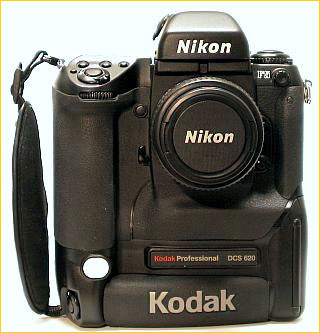 In the late 1990’s Kodak built the forerunners of today’s pro DSLRs. These included the 2 Megapixel DCS 620 and subsequent models such as the 6 Megapixel 760. The earliest Kodak pro DSLRs had electronics modules attached the way accessory motor drives used to be. But by the time of the DCS 620 F5 bodies were being modified with integrated electronics so as to be a one piece camera body. This lead to the Nikon D1 of 1999, Nikon’s first DSLR of their own design and the pregenitor of today’s pro body designs.

There were Canon 1 Series based models as well. A history of Kodak’s early pro digital cameras, the ones that started it all, can be foundhere.

The reason that these new bodies were as large as they were was not because anyone partocularly wanted them to be that bulky and heavy, but because they needed to be. It was simpy impossible to put all of the electronics and required batteries needed to build and support a DSLR in a body as "small" as a Nikon D5.

It’s for this reason that we have cameras like the current Nikon D3 series and Canon 1 Series. Kodak, in its final forray into DSLR building, with its DCS-14n of 2003, tried to shrink the full-frame camera, but it really wasn’t until the Canon 5D of 2005 that we had, for the first time, a traditional sized 35mm camera with a full frame sensor. The 5D was a breakthrough both in terms of price and resolution, not to mention just size. But, it wasn’t a "pro" level camera, in that it lacked features and built quality suitable for that designation, though many pros have used them successfully for the past three years.

Then just a few months ago, in Q3 2008, Nikon introduced the D700, offering almost all of the goodness of the flagship D3 in a traditional sized body. Pro build quality, full frame sensor, indentical image quality to the D3, and moderate price. What was not to like? The mold had been broken. What Canon began with the 5D, Nikon now finalized. It was no longer necessary to build a large camera with integrated vertical grip to be able to provide top build and image quality.

Which brings us to the new Nikon D3x, Nikons latest state-of-the-art pro level camera. With its almost 25 Megapixel full-frame sensor and tank-like body it offers everything that photographers might want in a camera, except for small size, light weight and low price.

Here’s the quandry then. Nikon isn’t alone. The competative Canon 1Ds MKII is selling for about $6,500, but more to the point the new 21Megapixel Canon 5D MKII and 25 Megapixel Sony A900 are each selling for just $3,000, the same price as a 12 Megapixel D700, and both are regular sized cameras, with optional vertical battery grips available.

If you’ve followed the above somewhat twisted tale certain conclusions are in escapable. The $4,000 premium that Nikon is charging for the sensor in the D3x isn’t likely to drop that quickly. Semiconductor pricing tends to decrease over time due to improved yields, and these are predicated on increased production. Based on industry reports it’s clear that D3x’s are not exactly flying off the shelves, and this is caused in no small measure by the worst economic slump in 50 years, which unfortunately for Nikon coincided almost exectly with the release of the D3x.

I should hasten to point out that the Canon 1Ds MKII, the D3x’s direct competator, is probably not doing any better. Yes, itt’s some $1,500 less than the Nikon, but it already faces a sibling that’s half the price offering image quality that’s comparable, if not even somewhat better, since the 5D MKII’s sensor is of a new generation.

Now, compound this with the appearance of the Sony A900 at about the same time as the Nikon D3x. It’s a full frame 25 Megapixel camera at nearly a third of the cost of the D3x; $3,000 vs $8,000. And, as is widely known, and admitted by Nikon, the sensor used by both cameras is essentially the same fundimental device. (Yes, I know that there’s a lot of proprietary Nikongoodnessin their version of this chip, but it does use the same dye).

So, here’s the bottom line to this conunundrum. Nikon is charging a $4,000 premium for the sensor in the D3x, yet Sony is selling their top-of-the-line A900 camera, which contains essentially the same sensor, for just $3,000. What’s wrong with this picture (no pun intended)?

Before the Nikon fanboys burst a blood vessel I will stipulate here and now that the sensor in the D3x is better than the one in the A900. This is so in one area at least, and that’s high ISO. Beginning at ISO 800 one definately has to give the advantage to Nikon, as seen in my Dec, 2008 three-way noise comparison. Other aspects of image performance are not as clearcut, but it’s not my purpose here to do such a comparison or nit pick the differences between the sensors.

Now, as 2009 begins, we have the following situation. Nikon themselves have created a dichotomy between their top-tier pro camera the D3 and the D700. Same sensor, same weather sealing, pretty much the same features, yet in a smaller, lighter and less expensive body. It’s really hard to make a case for the D3 now that the D700 is here.

On the other hand they have pressure from their compatators as well. No, the Canon 5D MKII and Sony A900 are not the same robust mega-featured super-hero as the D3x, but neither is too shabby when it comes to the basic job of producing very high quality images in a wide range of shooting situations.

With the 5DMKII Canon finds itself somewhat in the same boat, though they have not emulated Nikon in producing a camera that matches the 1Ds MKIII in terms of build quality and features (yet!).

As I read the tea leaves, here’s where we stand, or I should say, here’s where the camera makers stand. I predict that the days of theuber-cameraare numbered. Bodies the size, weight and price of the Nikon D3 series and Canon 1 series were necessary at one point in time, and that point has now stretched forward in time to the extent that some in the industry are seeing its horizon. In fact I am convinced that Nikon and Canon themselves see this coming.

The D700 was not produced as a mistake. Nikon knew full well that it would canibalize the D3, but also knew which way the winds were blowing. If industry scuttlebut is to be believed the Canon 5DMKII is flying off the shelves; this at a time when were are in dark days financially and all retail sales are in the dumpster. If retailers that I’ve spoken wth are reflective of the industry in general the Canon 1D MKIII and 1Ds MKIII, on the other hand, are sitting on dealers shelves.

So – why would Nikon produce the D3x now, and especially priced the way it is at this point in history?

My theory is as follows. For the past couple of years Nikon has been on a tear to regain its crown. Beginning with the full-frame 1D back in 20xx, Canon eclipsed Nikon in sensor size and resolution and thus bragging rights at least to being the leading pro brand, a title which Nikon had long held. But after an internal reorganization in the mid-2000’s Nikon came roaring back in short order with the D3, D300, D700, and a range of exceptional new lenses.

Is the D3x then"a bridge too far", as I’ve previously called it? Maybe so, but I feel that there’s method to Nikon’s madness. One just has to look at the D6 camera to appreciate some of what is behind Nikon’s thinking. Who else but Nikon would produce a brand new film SLR in 200x? Who but Nikon would produce cameras like its limited edition SP rangefinder camera in 200x?

Nikon has a sense of its place in history. Unlike some large corporations who are simpy motivated by market share and the bottom line, Nikon actually cares about its role in photography, and appears to make product decisions based on more than financial considerations. So, when it comes to the D3x, what we are seeing may well be a corporate statement by Nikon, much as was made with the D6. We’re back, and we don’t give ground in any market segment.

As for the pricing of the camera, (and although they couldn’t have foreseen the economic recession) all I can assume is that Nikon never intended the D3x to be a competative camera price-wise, but simply one that they needed to produce to complete their line and return to greatness.

Looking over the horizon 2009 is going to be a fascinating year. Leica has already announced the S2 camera line, a hybrid between a DSLR and medium format – bigger chip, but not that much bigger body and a range of new very high-end lenses designed specifically for digital with no legacy baggage.

Nikon for its part has hinted at a new camera format, the MX. Is this then the new high-end battleground? Can we anticipate that this is where the big-boys are going to duke it out, or will the wretched economy put the brakes on and lead to this catagory being stillborn.

And what about medium format? Hasselblad dramatically dropped its prices in Q4 of 2008, and the other camera and back makers in this catagory are following suit. While offering markedly different feature sets, how does an $8,000 Nikon DSLR compete with a $10,000 Hasselblad or Phase One 645?

Where the future leads us is, of course, unknown. As for the D3x, my field report will be online shortly. Till then, all I can say is – wow.