The Moose is Loose

For the past few years in the early Spring I’ve reminded myself that I should try and get up toAlgonquin Provincial Parkto photograph Moose, preferably in late May or early June. This is the time of year when the Moose find their way down to the one highway that runs through the southern end of the park. They can been seen and photographed in relative ease and abundance. But, in past years something has always come up to prevent me from doing this.

This year (2002) the need to test out some new camping gear (in anticipation of a major international photographic trip scheduled for a few weeks later) was a good excuse. So, during the last week of May, Chris Sanderson(Director of theVideo Journal) and I went on a 2 day camping trip to Algonquin, and were able to do some enjoyable photography of these large gangly creatures. Here’s the story. 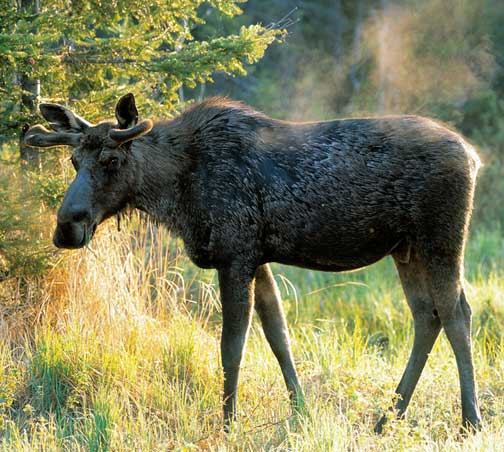 The steam rising from this young bull as the rising sun warms his back leads to the inevitable pun in the photograph’s title. Taken at 6:30am.

Exposure for Moose, which are typically dark brown, is never easy, but is made even more difficult in contra-jour lighting such as this.

Algonquin Park is located about a 3 hour drive north-east of Toronto. It is one of the largest Parks in Canada, covering some 7,725 square kilometers. Most people access the park through Highway 60, which runs across the lower part of the Park. Otherwise access to the vast region encompassed by the Park is restricted to canoeing.

Within the Park, along Hwy 60, there are a number of organized camp sites as well as a small number of inns. We stayed at the Canisbay campsite located at about kilometer marker 24. This is the most conveniently located campsite to the stretch of road where Moose can most readily be found in late May and early June.

Why do they come down to the road at this time of year? The answer issalt. During the winter months the Ontario Ministry of Highways keeps the highway open by plowing and also salting the road. In the spring the mashes along the edge of the road fill with rainwater and snow-melt run-off, carrying with it the road salt. This, combined with fresh vegetation in the ponds and spruce bogs makes for a tasty salad that the Moose love to graze.

According to the Park management, during the Spring it is actually easier to see and photography Moose in proximity to the highway than it is by canoeing the interior. The downside of this is that last year more than 50 Moose were killed by vehicles along Hwy 60. 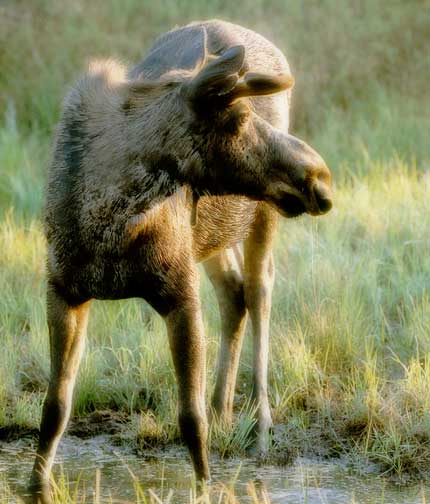 I wish that I could tell you an exciting story about how this bull’s heightened state of alertness was caused by the approach of a pack of wolves or some other natural threat. Regrettably, instead it was the approach of a massive and noisy 16 wheel logging truck on the nearby highway.

Personal aside:That the Ontario Parks ministry and the Provincial government allow commercial trucking to pass through the Park along Hwy 60 verges on the criminal. It endangers the wildlife, is noisy (we could hear trucks all night long from our campsite), polluting of the air quality and is in general completely antithetical to the wilderness experience. What are they thinking of?

We had been advised that the best viewing time is early morning. This was indeed the case. During the day we saw hardly any, and only one or two in the late afternoon. But in the early morning we saw a large number of Moose along the 25km stretch that we cruised, beginning at 5:15am. We also saw White Tailed Deer, Red Fox, Pilliated Woodpecker, Beaver and a Falcon. Not seen this trip were the Parks two large predators‚ Bears and Wolves.

Just seeing Moose in Algonquin is not the same as photographing them. These are usually shy, retiring creatures, and pulling the car over is often enough to scare one of these recluses back into the deep woods. Others though would tolerate us coming as close as 20 feet. In fact on a few occasions we were more afraid of them than they appeared to be of us. Most of my shooting though was with either a 300mm or 400mm lens on the Pentax 645.

While it sounds like all we did for a couple of days was photograph wildlife, the reality is that 90% of the time we were simply cruising back and forth along a 25km stretch of Hwy 60, roughly from kilometer marker #22 to #48 where the best sighting opportunities appeared to be found. This can be boring but also dangerous. One needs to drive slowly enough to keep an eye out for animals (and having two people in the car looking at either side of the road is a big help), but at the same time watching out for other vehicles, many of which want to travel a lot faster than you do.

When we would see a Moose we would slowly pull off to the verge and put on the 4-way flasher. This is legal on Highway 60 within the Park. But you need to remain aware that there are cars and numerous 16 wheelers passing by at up to 130Km/h (80 Mph) just inches from your back.

Though we saw quite a few Moose, especially in the very early morning hours, most were either cows or young bulls. Naturally we were on the lookout for an older male with a large rack of antlers. At one point we crested a rise and there, about 200 yards ahead of us, was just such a specimen crossing the highway. We became pretty excited.

But by the time we had pulled up and I had set up my tripod with long lens, the big bull had crossed a large open bog and was about to enter the trees. I quickly shot a few frames. This one is fun because it gives some sense of the challenge involved in capturing images of these large but usually highly elusive animals. (As with most images on this site, click on it to view a larger version).

A Word on Technique

If you’re a subscriber toThe Video Journalyou know that one of my constant refrains is that it’s the photographer’s job toextractandsimplify. Nature is inherently messy, and often the light is contrasty and even harsh. When shooting landscapes one can frequently change position or lenses so as to provide a more selective view, and if the light is wrong we can sometimes come back at another and hopefully better time. But when shooting wildlife you usually get just one opportunity.

For these reasons I sometimes use a Photoshop technique which I callGaussian Blur Overlays. I don’t use it often, but I’ve found that one of the photographs (Moose Alert) shown on this page benefits from the softening effect that this technique provides. In some ways this is a cheat because its purpose is to "save" an otherwise flawed image. On the other hand, I like the results. The jury is out.

I am now trying to do as much wildlife work as possible with medium format. The challenges of doing so are many, but the reward is a transparency with superb image quality and enlargability.

I’ve found thePentax 67IIto be excellent for landscape work, but when used together with long lenses it’s inappropriate for wildlife. But these lenses, when used on thePentax 645II, together form a great combination for this type of work. 35mm camera users should note that to calculate equivalent focal lengths multiply 645 format lengths by .6X. Thus, a 300mm lens on a 645 camera becomes a 180mm, and a 400mm becomes a 240mm lens in 35mm terms.

I used pretty much the same outfit in Algonquin as I did on my recent winter wildlife shoot inYellowstone National Park. This includes the Gitzo 1349 carbon fiber tripod andWimberley Sidekick.

Black Flies, Mosquitoes and other Buggers

The woods of Canada (including the northern tier of the U.S. and Alaska) are a wonderful place to vacation. Hiking, fishing and canoeing, not to mention photography, are superb‚ among the best in the world. Unfortunately there is a dark side to this natural paradise‚ biting bugs!

May and June offer up the black fly. Smaller than a mosquito, these little buggers not only bite, theychew. They are followed in June and sometimes early July by mosquitoes‚ billions of them. Then, when you think they’re gone, and outdoor peace is at hand, we have the appearance of deer flies and horse flies.

On this late-May trip there were black flies galore, but fortunately no mosquitoes yet. Black files are active during they day, but fortunately disappear at night‚ just the opposite of mosquitoes. The only help is to wear long pants and long sleeves, a hat, and to use lots of DEET. DEET is the only effective anti-insect solution.Deep Woods OFFis the most effective brand, providing a 90% DEET concentration. It smells, it dissolves some plastics (like cameras), and my guess is that long term use is unhealthy. But it is effective.