An Homage to Edward Curtis

Alain Briot is one of the most successful landscape photographers working in the American Southwest today. His work is widely exhibited and collected. His monthly columns for this web site, of which this is one, is calledBriot’s View. 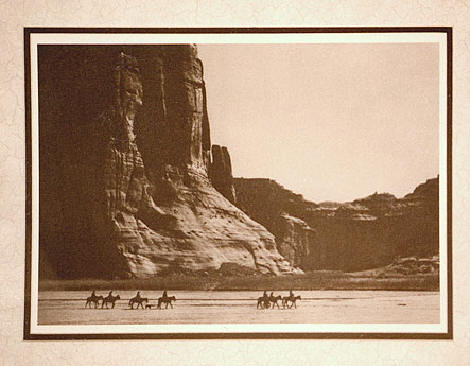 Around 1910 Edward Curtis (1868-1952) created a photograph which to this day remains a symbol of the West. Deep in Canyon de Chelly seven travelers ride across the wide expanse of the Chinle Wash while behind them loom the fantastic sandstone formation of Canyon De Chelly. The photograph has a sepia tone, giving it the quality of a historical document while imparting to it a timeless quality. To me this image exists out of time and stands out as a symbol of the West more than a specific moment in time. 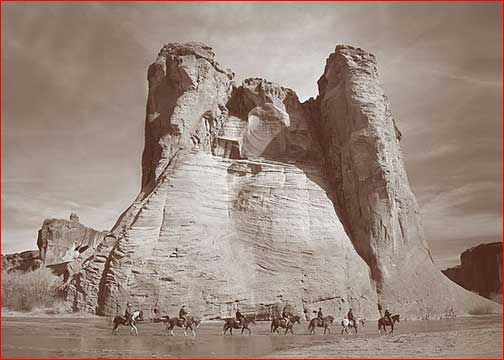 Living in Canyon de Chelly I have been aware of this photograph for a long time and have seen it over and over again. However its importance and significance were not made clear to me until I spent several nights at the Grand Hotel in Tusayan, at the South Rim of Grand Canyon National Park. There, each room is solely decorated with a large reproduction of Curtis’ masterpiece. Why not the Grand Canyon, I thought at the time? After all, isn’t it what people are here to see? It was then I realized that yes, people stay at the Grand Hotel in Tusayan because they came to see the Grand Canyon. But more than the Grand Canyon what they came to see is the West and it is the spirit of the West that they hope to encounter in their journey. Perhaps no photograph captures this spirit better than Curtis’Riders in Canyon de Chelly. 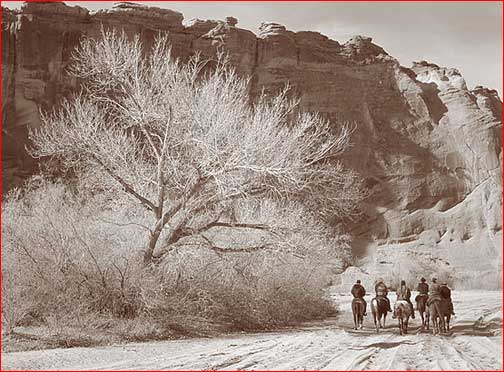 We all need to reinvent ourselves once in a while and face new challenges. I normally only photograph landscapes and never people in the landscape. However, realizing that I too seek the essence of the West, I set out to create a contemporary version of Curtis’ masterpiece. I knew I was about to embark on an uncommon assignment when I realized no photographer wanted to join me for the shoot. Most often back problems were the excuse. It made sense. But there also seemed to be a lack of photographic interest. They just couldn’t see what the interest of such a shoot was altogether. 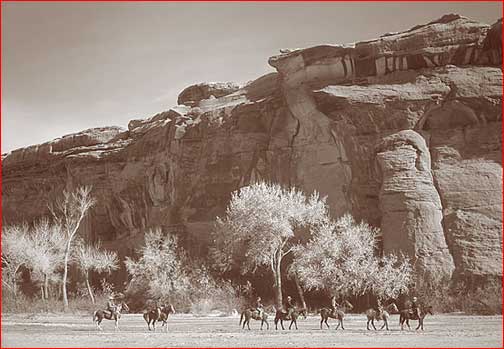 Certainly, photographing on horseback is no walk in the park. Why on horseback you may ask? Well, essentially because of the logistics involved in organizing such a photographic assignment. For one, there has to be horses, and in today’s world this means renting them and hiring a guide. Secondly, using a car to carry photographer and camera would mean hiring a second guide since the horses must have their guide and the car people must have their separate guide. Thirdly, horses are easily spooked, and having a car driving alongside may not be conducive to good-natured equine behavior. For all these reasons, and provided that I was able to ride, it made more sense to join the fun and ride along.

The ride lasted nearly 5 hours during which we covered a little over 6 miles. I hired 7 people, all of them Chinle residents, both Anglos and Navajos. No dress code was required as I wanted a natural, 2002 look. Come as you may, so to speak. Payment was in the form of a free ride in Canyon de Chelly accompanied by free matted copies of the best resulting photograph, according to my judgment. 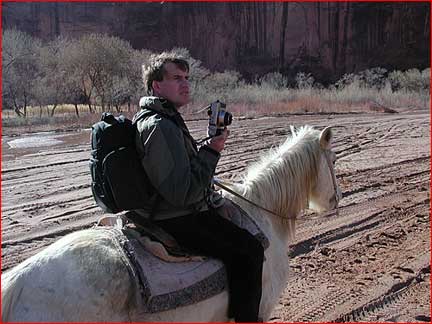 I carried film in my camera backpack as well as in my jacket pockets so I could change film from horseback. The shoot took place in February hence the warm clothing (polyfleece pants) required to not get cold during the ride. The water in the wash was actually frozen in places.

The results of this endeavor are here, together with photographs of me “at work” and at the same time “in the office.” Notice the nice view along my daily commute. Standard outfit for the job is also visible: an auto focus, auto-exposure camera is highly recommended since horses, in my humble opinion, do not understand photography (although some understand it better than others) and tend to not give you much time to compose your shot. Almost every time this translates into the necessity of photographing with one hand while attempting, without much luck, to control your mount with the other. In my case I selected a Fuji 645 zi medium format camera since it is both auto-exposure and auto-focus and has a built-in zoom (you might as well forget about changing lenses for the same aforementioned reasons). I also used 220 roll film for this shoot because I could shoot 32 frames before having to change film instead of only 16 on 120 film. No filters were used since things had to be kept very simple. 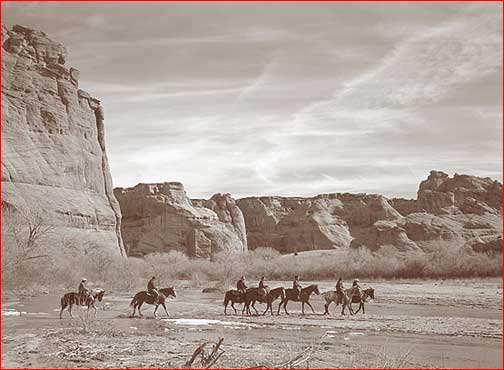 You can see from the same photographs that I carry a camera backpack. In it was a Hasselblad medium format system consisting of a 500cm body, 60mm and 150mm lenses plus an SWCM body and wide angle lens. To use this second camera system, which provided me with focal lengths beyond what the 645zi zoom can do I had to stop the horse (not as easy as it may seem), dismount, and hope the animal would wait for me (not a given either). This is where having a good guide helps: mine would hold the reins while I would get my equipment out and photograph.

Most of my successful images were taken from the ground with the exception of “Horse, Riders and Tree” which was taken from horseback. Composing from horseback is imprecise (at best) even if you manage to stop the horse since there is continuous movement no matter what. The horse turns its head, tries to munch on trees or grasses, wants to follow its equine companions, and so on. The framing in your viewfinder keeps changing although you are not moving. Very annoying. 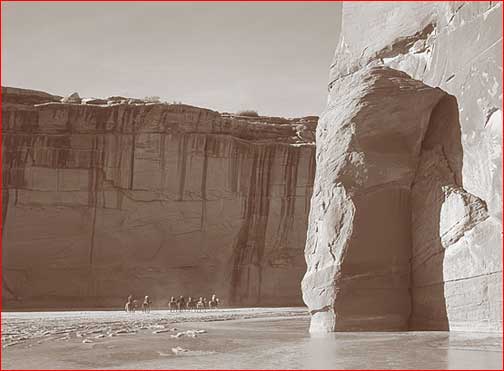 Once on the ground, with the guide keeping your mount under control, things are back to normal. Since I couldn’t use a tripod, both because it would have been very difficult to carry and because it would have taken too long to set up, I needed a relatively high speed film. I selected Kodak PRN 400, a chromogenic black and white film (C41 processing). This is an excellent film with good latitude and little apparent grain. Grain was further reduced by the use of medium format. This 400 speed film allowed me not to worry about shooting from horseback as I had plenty of speed and also gave me enough depth of field while shooting from the ground.

What else can I say? Well, for one, I had to give instructions to the riders: where I wanted them to go, how far apart I wanted them to ride, when to stop, and so on. This was achieved via walkie-talkie (Motorola TalkAbouts) between me and my wife Natalie who rode with the group and appears in most of the photographs. While the shots were not posed per se some “group orchestration” was necessary and Natalie relayed my instructions to the group and communicated my intents.

I exposed about 30 rolls of film total. Given the difficulty of organizing such a shoot film consumption was the least of my worries. Plus, when photographing things in motion, it is nearly impossible to know which composition will work best since the scene is constantly changing in front of your eyes. So I just went for it and exposed as much as I needed to expose. The results are here for you to see and appreciate.