This is one of a series of small portfolios taken from my January, 2005 shoot in Bangladesh.
These photographs will form part of agallery exhibitionin Toronto in March, 2005,
together with a collector’s print portfolio, which will be made available at that time.

I selected these three photographs for use here before thinking about what I wanted to say about them. What I realized then was that in each one the woman’s faces are either obscured, or turned away.

This wasn’t intentional, and I certainly took quite a few straightforward photographs of woman’s faces while in Bangladesh. I also found that everyone there, including woman, were quite open to having their photographs taken. More often than not it was hard to prevent them from smiling or waving, rather than have them put off by being the subject of one of my candid moments.

So why did I select these three images?

I think because of their enigmatic character. In each of these photographs we are presented with a bit of a mystery. Who are these people? What are they doing? And, why? It’s that characteristic that can make photographs of people most appealing, and I’ve explored this aspect of photographing peoplehereon previous occasions. 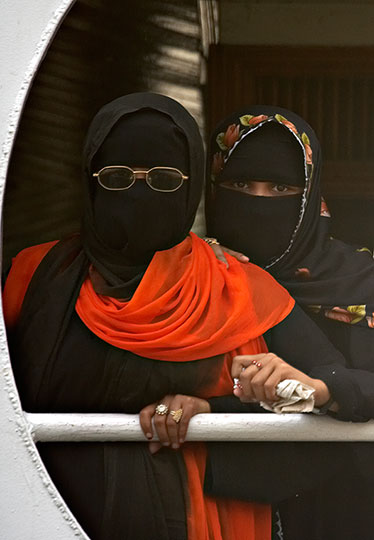 We were on the deck of our boat, moored near a public dock in downtown Dhaka, Bangladesh. A ferry pulled alongside us, and we watched as passengers got on and off. Of course they watched us too (foreigners are quite rare in Bangladesh).

I suppose I may have looked curious to these two woman, but probably no more so than they appeared to me.

Look at the curve of the white metal port that they are standing in, and then look for complimentary curves in the rest of the image; faces, glasses, shawl… 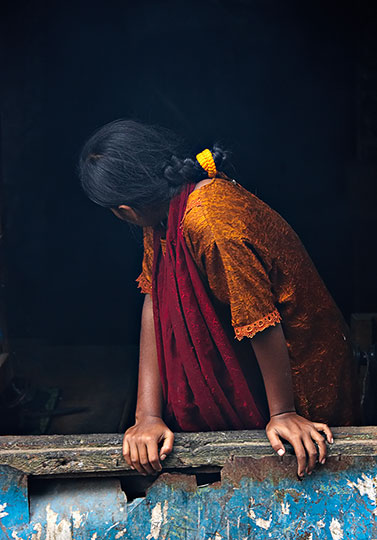 I was doing photography in an abandoned building in the ancient capital of Sonargoran. A parapet on the third floor faced across a narrow street to a building where people were living. This woman was turned, talking to someone else in the room. What drew me, in addition to the muted yet colourful tonalities, were the unanswered questions. Who was she? Who was she talking to? What was this unknown life all about? 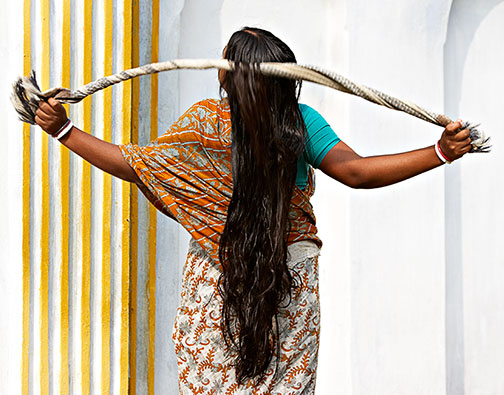 I was wandering though the courtyard of a Hindu temple. This woman lived within, part of the caretaker’s family. I was photographing some architectural detail, and when I turned around at one point, saw her whipping her long hair though a twisted towel in an almost balletic motion. Pure poerty, and this photograph is my attempt to translate that poem into a visual record.

At year-end it is a tradition in the media to issues awards –Man of the Year,Camera of the Year,News Event of The Year, and so