This review was written in 1999 when I first because interested in the possibilities that digital cameras offered. Though this model is no longer made, or available, and has long been supplanted by newer and better versions, I’m keeping this review online for the nostalgia’s sake.

Why would a serious fine-art landscape photographer want a point-and-shoot digital camera? Simple. I have a family, I take vacations, and as for everyone else snapshots are part of life. But there’s more to it than that. Why the Canon S10, and how does a consumer grade digital camera stack up? The results are surprising.

I will not attempt a full-scale review. This has already been very ably done by Phil Askey at his excellent site Digital Photography Review. (If you’re at all interested in digital cameras this site deserves a regular visit).

Phil’s Canon S10 review provides extensive detail regarding the camera. To save you having to read the whole thing for the punch line, here’s how Phil summarized the camera; “Kudos Canon, you’ve produced a digital camera capable of taking beautiful images in anyones hands, with a great feature set and some neat touches it makes some larger bulkier digicams look like dinosaurs and brings compact digital cameras to a new level“.

Another extensive and highly favourable review is found at the Imaging Resource web site.

Over the past few years I’ve owned a couple of digital point-and-shoots. There was an early generation Ricoh and more recently a Fuji. But, quality was hardly acceptable, even for snapshots, and so I usually did my travel and family event snaps with a Canon Elph APS camera. Even that much-maligned format did better than early digital cameras.

With several family events and trips coming up this winter I decided that it was time to revisit the state of the digital camera art. I have remained familiar with the new high-end, like the Nikon D1, but what about point-and-shoots?

After reading Phil’s site, and others, as well as visiting several retailers, I purchased the Canon S10. Picture quality appears high due to its 2.1 megapixel CCD. Resolution doesn’t always tell the full story with digital cameras, but these days there’s no point in getting anything less than 2 megapixels.

The camera is small, pocketable and nicely finished. Many of the current crop of digital cameras are awkwardly designed and look to me to be toys rather than cameras. The S10 is of a traditional design, like a Canon Elph / Ixus on steroids. Most importantly it takes the new Type II CompactFlash cards and in particular the340 MegabyteIBM Microdrive. This card if you haven’t seen one yet is a remarkable bit of innovation, putting a huge amount of storage on a real disk drive the size of a book of penny matches.

With the S10 this drive allows 236 maximum resolution pictures on a card, or almost 600 in normal resolution.

It also is the source of a bug which caused some early S10 owners grief. Briefly put,someIBM Microdrives don’t work insomeCanon S10 cameras. There is an active discussion group for Canon digital camera owners on Phil’s site.  In mid-December 1999 a firmware update was announced by Canon. Current owners of S10 cameras can have them update for free by canon, or you may be able to do this yourself by downloading the patch.

Fortunately the drive that I already owned works perfectly with my S10 camera so I’m saved from having to deal with this issue. Potential S10 purchasers intending to use a Microdrive should check with Canon or their dealer to see if this issue has been resolved by the time you buy yours. 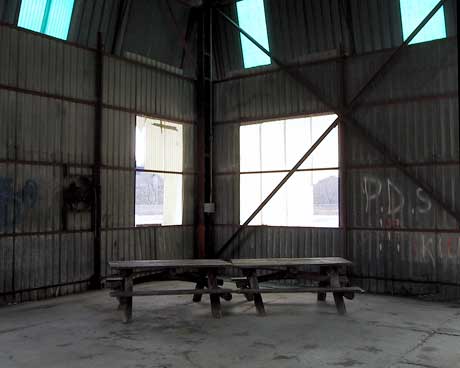 I won’t bore you with my family snapshots. They’re likely to be as uninteresting to you as yours would be to me. But I will report that I’m in complete agreement with Phil Askey’s review. The camera is well engineered, simple to use and produces remarkable good photographs, notwithstanding their size limitations. But, I have made 4″X6″ and even some 5″X7″ prints on my Epson 1200 printer that are more than acceptable, and for web display the results are completely satisfactory.

In fact I surprised myself the first day out testing the S10 by taking the photo above as well as the one below. I find both of them satisfying, regardless of camera or format. I am particularly impressed with the cameras dynamic range and freedom from noise in the shadow areas. I’m looking forward to further experimentation.

I’m a big fan of wide-format or panoramic photography. The Canon S10comes with a very nicely integrated ability to shoot separate frames which can then be stitched together to create an ultra-wide-angle image. The frame above was created from 3 separate shots taken with the lens set to the equivalent of a 35mm focal length. I have a 15″ wide print of this on my desk at the moment that could have been taken with a medium format camera, it’s that sharp and detailed. Again, dynamic range is excellent.

While any series of carefully taken images that have overlapping content can be merged to create this type of panorama, the Canon S10 and it’s companion software Zoombrowser EX 2.0 and PhotoStitch 3.0 make the process simple and fun. Phil neglected to include a review of this software in his report, but I can say that it is intuitive and powerful, not only in creating stitched panoramas but also in managing one’s digital photographs.

One note of caution when shooting multi-frame panoramics. Be sure that the camera is level. If tilted, the software will try its best to merge the frames but some anomalies will be noticed. This is less critical for landscapes than for cityscapes where there is an abundance of vertical lines.

I was very pleased to discover the panoramic capabilities of the S10 and it’s software. I was doubly pleased when I uncovered the fact that in addition to panoramic stitching the camera can be used to shoot four frames of a subject as a mosaic and then have the software merge them into a single frame. 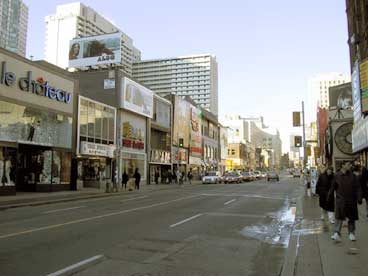 Above is a shot of Yonge Street in downtown Toronto, taken at the “35mm” focal length of the zoom’s wide-angle setting. 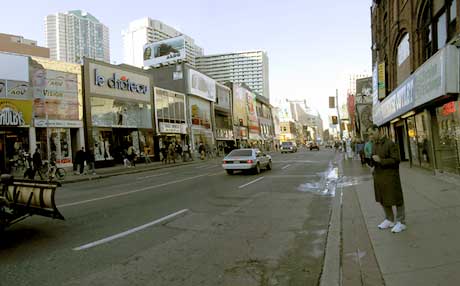 It’s a bit like having the resolution of a digital camera from 2002 in your hands today. You’ll notice that there are problems. While the automatic stitching software has done an admirable job of trying to compensate for perspective differences between the 4 frames, ithasintroduced some distortions of its own. My feeling is that this technique is therefore best left to shots where there are no straight lines.

I also managed to avoid cars or people moving at the points where the frames overlap. If I hadn’t they might well have appeared in the frame twice.

If you click on the above frame you can see a 10″ wide version of this shot. It’s clearly a digital image, but I’m enthusiastic about experimenting with this technique and to apply it to pictures taken with other equipment.

My needs are necessarily different than yours. I have several complete camera systems, from 35mm through medium format, panoramic and 4X5″. Each has a special utility, depending on what I’m shooting. My need for a digital camera is for snapshots, and so small size and tote-ability are the most important factors for me. Have a look at the most recent reviews at Phil Askey’s site and see which one best meets your needs. You won’t find a camera that’s as small or that has higher quality than the Canon S10.

Just be aware that new digital cameras are currently being introduced monthly. This is the hottest segment of the consumer electronics market. So, what you buy today is likely to be obsolete, or at least tired looking in as little as 6 months. But, don’t think that waiting is the answer. This level of activity is likely to last for at least another five years at its current pace. I predict that by then the major manufacturers will have full-featured SLR cameras producing 25MB uncompressed files and medium format single-shot camera backs as high as 50MB. Film will at that time start to be on its way out.

But, if you don’t jump in now, think of all the fun you’ll be missing!

There is a strong rumor (now confirmed by several sources)‚ that Canon will be announcing the model S20 pocket-sized digital camera in February. This camera will be the same form-factor as the current S10 but will have a 3.3 Megapixel imaging chip.

There are now solid rumours that February will also see the new generation of Canon’s flagship camera EOS-1n, and there’s a good possibility that Canon’s digital SLR, based on the EOS line will be announced. I wouldn’t be surprised if it used the same 3.3 MP chip as the S20 but with a superior anti-aliasing filter and an uncompressed raw TIFF mode.

I told you that this was a hot market and that new cameras were going to be appearing at a furious rate!

The rumoured Canon S20 with a 3.34 Megapixel chip has just been announced at the annual CeBit show in Germany. Not final price, and a delivery date of “Coming Soon”, but it is real. This camera is based on a new imaging chip from Sony, and quite a few manufacturers as well will have models using this chip by mid-summer 2000. Additional information can be found at the Digital Photography Review web site.

Sony Announces Two NEW cameras the a6500 and RX100V

Publishers note: This has been quite a year for Sony camera announcements.  There is no question that Sony has plans to dominate the mirrorless