Death in the Afternoon 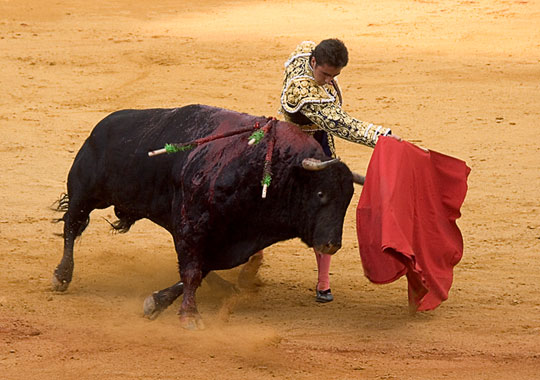 Seville is the heart of Andalusia, and Andalucia is the ancestral home of bullfighting. I had never been to bullfight before, but friends with whom we were traveling on a spring vacation in Spain were life-long enthusiasts, and convinced me that this was something to be experienced. Since I’m always open to new things (especially when they might involve photography), I was greatly looking forward to attending a corrida.

Since I was told that bullfighting (at least as its practiced in Spain) is highly formalistic, developing an understanding of what I was going to see seemed worthwhile. Hemingway’sDeath in the Afternoonwas recommended as a good introduction as well as an enjoyable read. Though now some 70 years old, and displaying a somewhat archaic writing style, this book nevertheless provides a terrific feel for the esthetic, cultural and ritualistic aspects of bullfighting.

Few cultural activities in early 21st Century Europe inspire as much debate as bullfighting. It’s always been controversial, but never more so than in the “new” Europe, where political correctness, though not quite as bad as in the U.S., still remains a factor — particularly as the continent increases its homogenization.

Bullfighting is an established part of Spanish history and culture — especially in Andalusia. In parts of the country, such as Barcelona — that most European of Spanish cities — it has already come to an end. But my guess is that the residents of Seville and rest of southern Spain will long continue their centuries-old fascination withdeath in the afternoon.

I have no desire to join this debate. If you’re interested in bullfighting, how to photograph one, or simply in viewing my photographs, read on. Otherwise please don’t either write to me directly or on this site’s Forum about any aspect of bullfighting other than that related to photography. This simply isn’t a debate that I’m interested in joining, nor is this site the proper venue for such a discussion — regardless of its merits. Note as well that I have not published any of the more "disturbing" photographs. 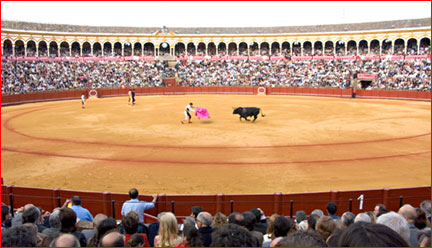 Seville’sPlaza des Toros Maestranzais one of the world’s oldest and most beautiful bullrings. But compared to modern stadiums its seating is both limited and cramped. There are no seats as such, just tiered stone steps. From a photographer’s perspective (pun intended) this means that the person in front of you is very close — your knees are almost touching their back. Photographically this means that a long lens (anything more than 100mm) will poke them in the head. The other concern is the camera’s shutter noise. It is quiet during much of the fight, and the sound of a camera going off continuously next to their ear is not likely to please the person sitting in front of you. I discovered this when after the first few minutes of shooting my forward neighbor turned around and glowered at my camera. At first I didn’t understand what the issue was, but then when he turned again immediately after I’d taken the next frame I realized the problem.

Fortunately I was shooting with a digicam (a Minolta A2) rather than an SLR. I simply tuned off the electronic shutter sound and continued to work silently for the next couple of hours. Score one for digicams.

The other advantage that a digicam offered in this situation was that I was able to shoot with a longish lens (frequently the 200mm end of the A2’s zoom range) without bumping the head of the person in front. A lens like a 70-200mm zoom on an SLR would have been workable, but only “just”, and likely not without some discomfort, because of the tight seating. Anything longer would have been out of the question from a practical point of view. 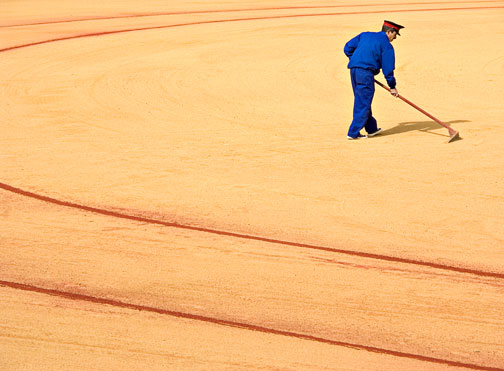 Obviouslywhereone sits plays a major role in determining focal length. Our seats were in the sixth row, which tuned out to be ideal from a photographic point of view. Higher up would have meant being further from the action, and therefore a longer lens would have been needed for appropriate framing. Sitting lower down would have meant that the background for many shots would have been the seats on the opposite side of the stadium, rather than the graphic simplicity of the stadium’s sand.

Since these seats were about as good as one could get, they also turned out to be the most expensive. The ticket’s had a face value of 70 Euros (about U.S. $85). But, since good seats sell out as much as a year in advance we had to pay scalper prices — double face value — through our hotel’s concierge.

Seating in a bullring comes in three flavours — full sun, partial shade and full shade, and are priced accordingly. Since Seville is in southern Spain it can be quite hot. A seat in the shady side of the stadium is best. It also is the preferred side for photography since bullfights take place in the late afternoon and early evening, and if one sits in the sunny side you’ll end up shooting into the setting sun as well as squinting and being really hot.

The first thing that I did upon arriving in the stadium was to take a meter reading of the sand. It turned out to be about a stop brighter than 18% gray, so I dialed in +1 stop of exposure. Since the bulls are mostly black this also meant a more appropriate exposure. The matador’s costumes are bright but have very little pure white, and so I found that a full stop of additional exposure over whatever the camera’s average metering chose turned out to be correct. Since I was shooting in RAW mode this also meant that the exposure was slightly further to the right of the histogram than I would have wanted if I’d been shooting JPGs. But it was advantageous in terms of reducing noise. Proper compensation for shooting JPGs would have been +1/2 stop rather than a full stop. 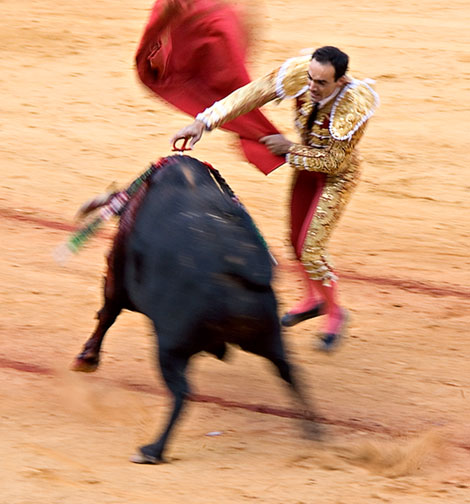 There are three matadors at a bullfight, and each conducts two fights. This makes for roughly a 2.5 hour display. Light levels drop quite a bit during that time (especially in the Spring, which is when I was there). This means that at ISO 64-100, shutter speeds ranged from 1/1000th second at f/5.6 at the start down to 1/50th second at f/3.5 during the last fight.

As can been seen in some of the shots on this page the use of a slow shutter speed can really enhance a sense of motion, and is quite effective. This is especially true when there is at least one thing in the frame that is not motion-blurred. A total blur has completely the opposite effect.

Of course shooting at a slow shutter speed with a moderately long lens can be problematic because of camera shake. For this reason I was very pleased to be working with the Minolta A2 which has image stabilization built in. If shooting 35mm film or digital a stabilized long lens such as those from Nikon or Canon would be very worthwhile. 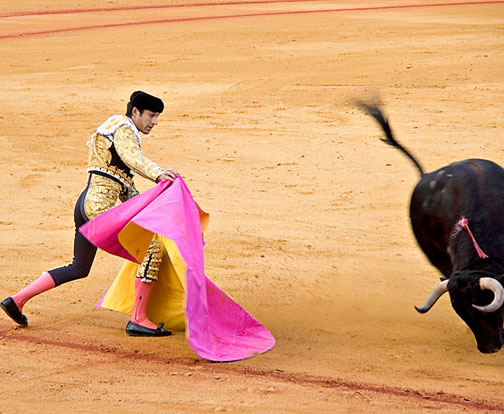 Even though I’d done my research and knew pretty-much what to expect, it took the first two or three fights before I had a proper sense of the flow of events. For this reason the shots that I took during the last three contests turned out to be the best.

A bullfight is highly ritualistic, and though the actions of the bull can be a wildcard those of the human contestants are as predictable as those of a ballet dancer — maybe more so. For this reason, and also because I had a lot of experience in years past photographing athletic events professionally, after the first couple of fights I found that I was able to anticipate what would happen and therefore get good shots of the peak action that I wanted. 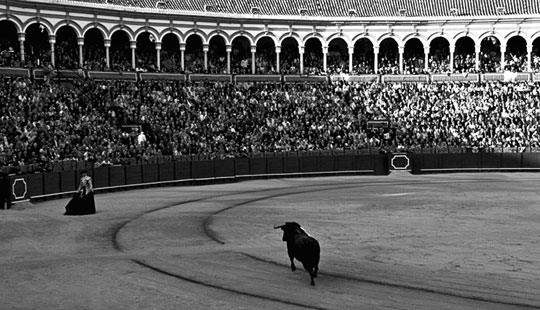 My mental image of a bullfight had been conditioned by historical B&W photographs. I was quite taken by the intensity of the ocher colour of the sand, as well as the reds and other saturated colours. When I took this image I knew that it would look best in B&W — evoking the archetypical bullfight scene of old photographs and movies.

As much as I appreciated the small size and quietness of the Minolta A2 (after all – I was on vacation), there were times that running into the 3 frame buffer limit when shooting RAW drove me mad. If I’d had a DSLR I wouldn’t have lost as many shots as I did to the lengthy wait for the buffer to empty. If I’d been using a camera like a Canon 1D Mk II or Nikon D2h with a stabilized medium-range zoom I would have been in heaven, but… life is full of compromises. (The person in front might have clobbered me over the head with it after I’d shot a 30 frame burst in his ear, but that’s a risk I might have been willing to take.)

Because a digicam like the Minolta A2 (one of the most responsive of its genre) can still be slow to capture fast action (definitely slower than even the slowest DSLR), I did several things to speed it up. I switched off autofocus, and also set the camera to manual exposure much of the time. A great deal of the action in a bullring takes place in a narrow range of locations, so that once the camera was prefocused automatically I switched to manual. And, since the light level changes weren’t abrupt I similarly didn’t need to have autoexposure active. By putting these two settings to manual the camera became much more responsive, and I was able to get many of the shots I wanted.

I had been warned before going to this bullfight that a good one can be a work of art, while a poor one can be dreadful, even disgusting. Fortunately I was to see some of the finest current matadors and bravest bulls, in arguably the most beautiful arena in the world. If you think that you’d like to see a bullfight, then this is the place to do it. Caveat emptor.