In mid-May 2003 I spent 5 days leading a photographic workshop inDeath Valley, CA. I have shot in Death Valley on several previous occasions during the past few years, and likely would not have gone back there again so soon. But, there was a total lunar eclipse scheduled for the evening of May 15th, and I had decided that this was likely the best place for the eclipse photograph that I had visualized.My write-up on the eclipse shootdescribes that event, but since we spent a total of five days working in the Death Valley area, here is a look at some of the photographs that were produced, and a discussion of some of the locations.

For the landscape photographer there are few subjects as appealing as sand dunes. They have little colour of their own, taking on the colour of the ambient light. Their shapes are sensuous and highly graphical. Depending on the angle of the light they can range from smooth to highly textured.

(The best of this series of dune photographs is now part of myFeatured Imageselection and is displayed and describedhere.)

I have shot sand dunes with lenses ranging from ultra-wide to ultra-telephoto, and regardless of the focal length used came away with successful images. Naturally, shooting in dunes is best when the light is low, accentuating shape and texture with its modeling effect. Mid-day presents little opportunity, other than the possibility of heat stroke. 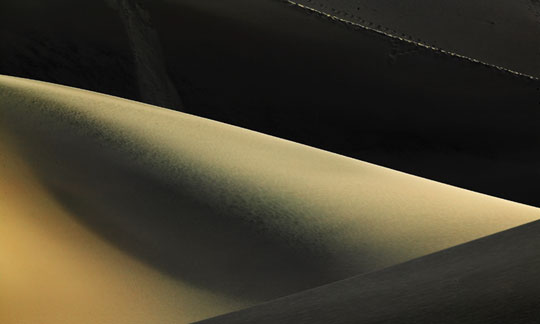 Because so much of the visual pleasure in dune photographs is about their texture, shooting them with either large format, medium format, or high-end digital will result in the most rewarding prints. Even in 12" or 13" wide screen images one simply can’t enjoy these images the way one can in a large print.

Working in the dunes presents some unique problems. One is that in most popular and easily accessible places, such as the dunes nearStovepipe WellsinDeath Valley, footprints can be a problem. Occasionally they can be used in a composition, but usually they are to be avoided. 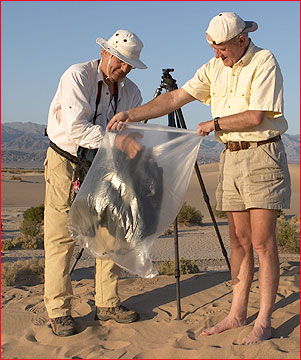 The second problem is the affinity that sand has for camera equipment. If the wind is blowing all bets are off, but even without wind sand has a nasty habit of finding its way into your camera bag. We used large transparent lawn trash bags and placed our camera packs inside them while working in the dunes.

(The best of this series of dune photographs is now part of myFeatured Imageselection and is displayed and describedhere.) 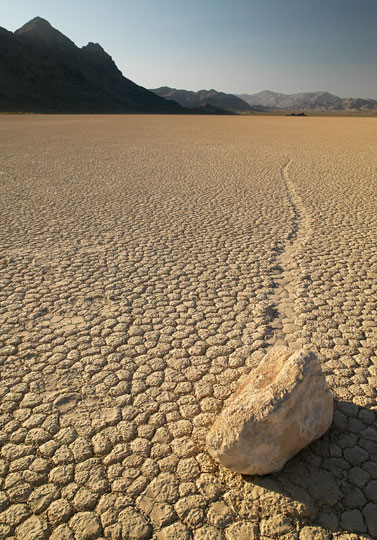 There are a handful of superlative but now cliched locations for landscape photographers in the American southwest. These includeAntelope Canyon,The Wave,andThe Racetrack. The Racetrackin Death Valley is possibly the most bizarre of these.

Located about a 2 hour drive fromStovepipe Wells, it is not that difficult to get to, though it involves a 27 mile drive over a rough washboarded dirt road. We had a punctured tire on one of our rented SUVs on the way there, and two days later one of our workshop members went back on his own and blew a shock absorber on his rented vehicle. I would not recommend this road to anyone driving their own vehicle, and while its passable in a car much of the year, a high ground clearance 4WD vehicle (rented) is best.

The best time of day to shot atThe Racetrackis sunset, but this also means a long slow drive back out in the dark. Don’t hesitate to go there, but if you do, be properly prepared, (water, spare tire, food, etc). 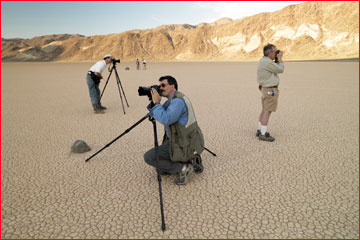 What is it? The Racetrack is a dry lake bed several miles in circumference. What makes it unique is that it is absolutely flat, and that the south end of the playa has a scattering of rocks on the surface (some weighing as much as 100 lbs) that move mysteriously, and leave trails in the baked mud. How did they get there and how do they do this? No one really is certain. There are theories. One is differential heating combined with high winds. When there is water on the lake bed and it freezes, followed by a high wind, the rocks are blown across the ice as one side melts in the morning sunlight. Maybe. Like I said, no one is certain. (I think it’s really aliens doing it to freak us out, but this is a minority opinion).

In any event, the photographic opportunities there are amazing, and any photographer visitingDeath Valleyshould try and visitThe Racetrackat sunset. You’ll want to have a wide angle lens, preferably a tilt / shift such as theCanon 24mm T/S, or a view camera. Depth of field from inches to infinity is the order of the day. 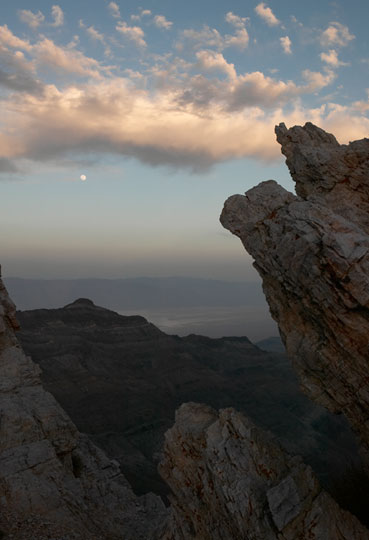 Not as well known as the famous valley overlooks atDante’s ViewandZabriskie Point,isAguereberry Point. It is located more than 5,000 feet above the valley floor, but unlike the other two overlooks is on the west side of the valley, about a 45 minute drive fromStovepipe Wells. We had considered it as a possible location for our eclipse shoot, but in the end decided to go with the sand dunes instead.

We shot there on the night before the full moon, and had a moonrise a bit over an hour before sunset. This is a great time to include the moon in a landscape photograph because it is high enough in the sky to be visible above mountain ranges, yet with a brightness that matches the intensity of the sunset illumination. Significant detail can be seen in the moon in this shot when viewed on a large print. 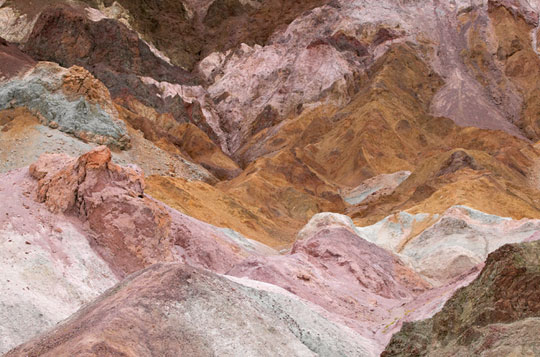 Easily accessible along one of the valley’s main roads isArtists’ Palette. This is an exposed cliff face where a large variety of multi-coloured minerals are jumbled together, creating a graphical jigsaw puzzle. One can hike these rock and sand formations looking for just the right combination of patterns and colour, but this photograph was taken from the parking lot.

No, they’re not inAlabama, and not even inDeath Valley. But they are close by, at the foot ofMt. Whitney,just a 2 hour drive fromDeath Valley. We got up at 3:00am one morning to drive there for sunrise, and were rewarded with some great photographic opportunities. 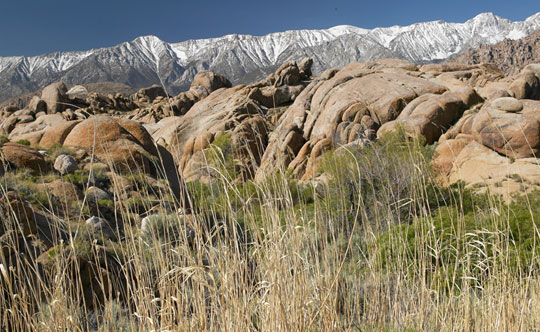 Just outside of the town ofLone Pine, CA, theAlabama Hillswere used extensively by Hollywood as the setting for countless Western movies over the years. I’ve shot there a few times in the past, but never in depth. It is an area that I plan on exploring in greater detail on a planned workshop in the Fall of 2003 (detail to come this summer).

Two other articles and portfolios on Death Valley can be found on this site, one from a shoot there in1997and the other from1999.