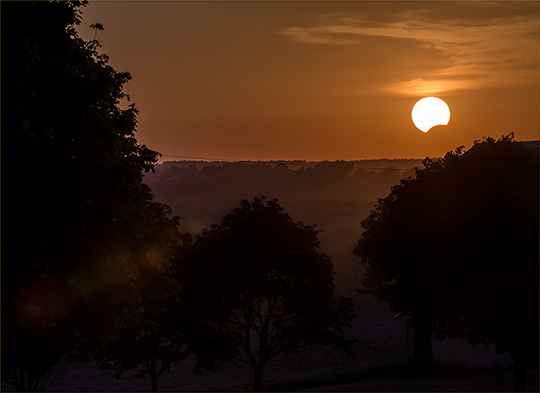 …to experience a sense of forever,
to step beyond the reach of history
and outside the perimeter of human time itself.
— fromPilgrimage; Gideon Bosker and Lena Lencek

In the early spring of 2003 I read inAstronomymagazine that there would be a lunar eclipse in mid-May. Since I’m a bit of an astronomy buff I found this of interest, but it wasn’t until I came to the place in the article that the timing was discussed that my interest really became piqued. I saw that the eclipse would be visible from the west coast of North America at sunset on the 15th. I realized that I would be able to shoot the moon risingwhile it was in eclipse,and with the foreground landscape still illuminated by sunset glow — a terrific photographic opportunity. The questions then was — exactly where to shoot it from, with what equipment, and how to ensure clear skies?

I did some research and then wrote about my findings in an article titledCrimson Moon. I had concluded thatDeath Valley, Californiawould offer me the best combination of appropriate landscape potential, along with the likelihood of clear skies. I also decided to organize aworkshoparound the opportunity.

Technical Details on The Photograph

This was a very challenging photograph to make for a number of reasons; some technical and some logistical. Here then are the specifics about how this particular image was produced.

I used myCanon 1Dsand theCanon 500mm f/4L ISlens. Though I use this lens predominantly for wildlife work it was my lens of choice for this opportunity because of its combination of wide aperture and long focal length. I knew that I wanted the moon to be as large in the frame as possible, but that a wide aperture would also be a must because of how dim the moon would be. The downside of using this lens was its bulk. Not only is it awkward to travel with, but it, along with my equipment backpack and tripod, was quite a burden during the 40 minute hike out into the sand dunes where we set up for the shot, and of course afterward in the dark hiking back to the highway.

The weather for the evening of the 15th had been a concern for the previous several days and a topic of much discussion among the workshop members. WhileDeath Valleyis usually dry and clear, on the evening before there had been heavy clouds and even a sprinkling of rain (mostly virga though). To top it off there was a lot of haze, and theFuneral Mountainsto the east were barely visible. Adding to the concern, there were heavy winds which generated a sand storm that evening. What would it be like on the evening of the eclipse? Would our trip have been in vain?

At about 5:30pm on Wednesday evening, about two hours before sunset, we drove out to the sand dune area nearStovepipe Wells. The skies had cleared and even the haze that had lingered all day had blown away. Not a cloud was to be seen, and we knew that we had the weather nailed. Also, the wind storm of the evening before had blown the dunes clear of footprints. Bonus! 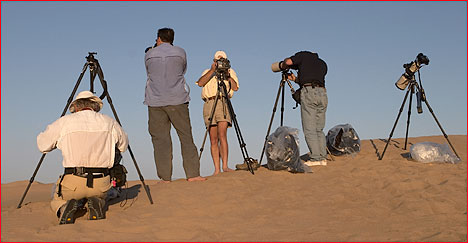 The next challenge was finding a spot that had the characteristics that I was looking for. I wanted some layering in the foreground. The moon by itself would simply be an astronomy shot and what I was looking to create was a landscape image that included the eclipsed moon. We hunted the dunes until we found a spot that had a sloping dunes foreground and a view of the mountains behind which the moon would rise. The concern though was, exactlywherewould the moon rise? We knew that it should rise at an estimated magnetic declination of 92 degrees. But was this right? Past experience had shown me that because magnetic declination data is not exact the actual position could be off by a degree or two, or even more. Also, the exact timing was an unknown because of the mountains in the distance. The moon doesn’t rise straight up — it angles to the south as it rises, and it had to rise above about 4 degrees of elevation to clear the mountains. Would we miss it behind a dune if our calculations were wrong? 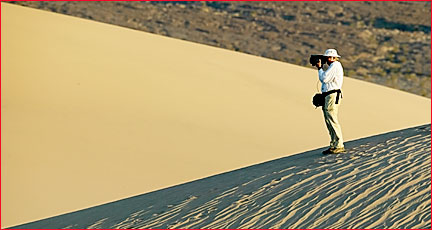 We set ourselves up at a spot with the foreground we wanted and waited. But because of our concern that we might miss the moon’s rising behind a dune if our calculations were offChris Sanderson, the director ofThe Video Journal, volunteered to position himself about a hundred yards away at a spot where he had a clear view of the entire horizon, unobscured by foreground dunes.

We were very glad he did, because he yelled to us as soon as he saw the moon. It wasn’t visible to us, because, as we had feared could happen, the moon was rising about 2 degrees to the north of where we thought it would, placing it behind the dunes, to the left of the frame as seen above. We quickly moved about 100 feet to our right and were able to reestablish ourselves, and the successful frame was the second frame taken.

While we were waiting for moonrise I saw that there was a potential problem with depth of field. The foreground dune was a good hundred yards away, but a quick test using the camera’sDEPmode showed that I would need an aperture of at least f/8 to held depth of field from the dune crest to infinity. I therefore set the camera to aperture priority mode, f/11 (to play it safe) and hoped that a fast enough shutter speed to avoid motion in the moon would result. As it turned out, with an ISO setting of 400 an exposure of 1/13th of second was needed, easily fast enough so that there was no concern needed about moon motion during the exposure.

I had the shot I had set out to get! The pieces all came together as I had hoped and planned — weather, location, light and equipment. Though the image looks like an illustration from a 1930’s pulp science fiction magazine’s cover art, it is exactly what we saw. Below is the original camera frame, with no processing done other than white balance — straight from RAW processing inCapture One. All that was needed for a final print was a bit of contrast enhancement, and cropping to a more appealing and appropriate aspect ratio. 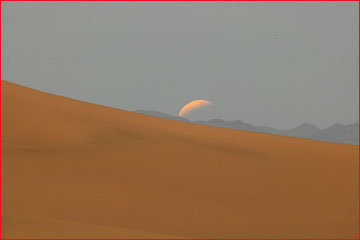 Why the Moon is Pink

Anyone who has seen a total lunar eclipse, or at least has seen a good photograph of one, knows that it appears a dark crimson red. This is due to the only illumination being that which passes around the edges of the Earth’s atmosphere. I have been asked why then the moon in my photograph is pink?

The reason is simply the result of the light from the bright part of the moon passing through a lot of dirty air near the horizon,twice— once going from the Sun to the Moon, and again as it is reflected back to where we were standing.

The dark part of the moon is essentially invisible because of the still low contrast at twilight,. Once the moon rose higher, and the sky darkened, the pink part of the Moon became white (bright gray), as the moon usually is. Once the eclipse became total though we saw the remarkable deep crimson colour of a total eclipse.

Of course we didn’t stop shooting once the moon cleared the horizon and the intended photograph had been taken. There was about 2 more hours of eclipse to be witnessed, enjoyed and photographed. Here is one of the other photographs which I took. 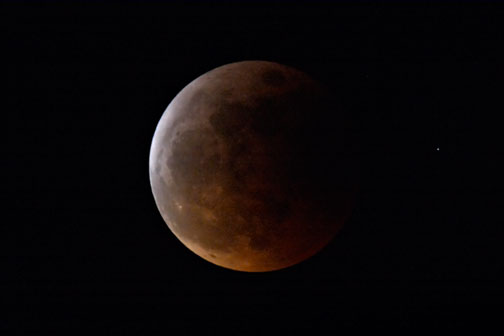 Technically producing my photographLunar Eclipse at Moonrisewas easy compared with photographing the moon in full eclipse that evening. Because on the west coast it was so close to sunset, the contrast was very low against the still bright sky for quite a while. Great for what we had come for, but not so good for strictly technical eclipse shots.

Once it got dark the beauty of a total lunar eclipse became visible. I wanted greater magnification and also needed a higher ISO, and so I switched to my newCanon 10Dalong with a Canon 2X extender on the 500mm f/4 lens. This gave me an apparent focal length of 1,600mm at f/8, and more importantly I was able to use a coincidently matching ISO of 1600.

The frame above titledMoonin Eclipse is the best of a series. It is shown full-frame, and a larger version can be seen by clicking on it. It was processed thoughNeatimageto reduce noise, but otherwise it’s pretty much as shot, including white balance, which was set to AWB on the camera and not changed in RAW processing. It turned out to be very close to the way that it looked to the naked eye.

The big challenge with getting this type of frame was how dim the moon is when in eclipse, and the long exposure times therefore needed. Combine this with the extreme magnification that one wants, and the problems of vibration that this brings, and first rate results can be tricky to achieve. Sand is also not the firmest platform for a 1,600mm effective focal length.

Focusing was also an issue with such low light levels. I turned autofocus off and focused manually, using the star visible to the right of the moon as my point source for establishing focus.

The lens was mounted on aWimberly Sidekickgimbal mount (the moon moves through the frame very quickly at this magnification), attached to aGitzo 1348carbon fibre tripod and anArca Swiss B1 head. I used mirror lock-up and delayed timer release to reduce vibration. Checking the rear LCD histogram I saw that the shortest exposure that would produce a usable frame at f/8 (the f/4 lens combined with a 2X extender) was 1 second at ISO 1600. (I didn’t try ISO 3200 because I felt it would be too noisy for this application). This was problematic because the math showed that at this focal length an exposure of longer than about 1/2 second would lead to blur, caused of course by the earth’s rotation.

If you look closely at theenlarged versionyou’ll see that the star to the right of the moon isslightlyelongated for this reason. But the image of the moon still retains much of its sharpness, and I consider the shot successful as a record of the event.

Myportfolioof photographs from this shoot is also online, and one of the images from the sand dunes area is now this site’sFeatured Imagefor May. I received a very large number of submissions to the Eclipse photograph contest, and many of them were excellent. It was difficult narrowing the field and declaring winners, but here they are —The winners of the Luminous Landscape Eclipse Photograph Contest.

Most of my visits to Hawaii have, strangely enough, been on business. Though I love the islands I've done little photography there. A brief trip