It’s really quite boring. Every time a new camera comes along (or someone buys one and feels defensive about their decision), the online diatribes start. Or, people obsess over test reports and whether aFuzzyflexis "sharper" than aWonderblad.

Stop it, or It’ll make you go blind.

Or at best it will blind you to the fact that similarly speced cameras produce images with quite similar quality – subject to the caveats below. There simply aren’tsignificantdifferences, and certainly nowhere near as important differences as are provided by different camera models when it comes to design features, user functionality, and ergonomics.

With this in mind, here is my opinion, based on having tested and actually used in the field most of the DSLRs produced in the past five years.

Similarly speced digital cameras will produce prints with roughly similar image quality characteristics. The real differences that are seen, (and these are indeed real), when print size is kept within the limits of the sensor’s inherent capabilities, almost always relates to variations between lenses used, testing conditions, variations between individual cameras, and the post-processing technique applied – including variables related to in-camera JPG processing or RAW processing software used.

This holds true when the cameras being compared are used at low to moderate ISO. This means up to, but not including ISO 400 and higher. This is where the differences between cameras, sensor architecture, and pixel size starts to produce non-trivial differences in image quality.

Of course absolute sensor size will determine how big a print can be made before artifacts become visible. For example, assuming 240 PPI for an inkjet print, an 8 Megapixel camera can produce a 10" X 14" print (roughly A3). Smaller sensors, smaller prints. Bigger sensors, bigger prints.

And larger sensors with higher pixel counts will always allow for greater cropping ability, and therefore superior images when this is needed.

Once one gets into the ISO 400 range and upward, substantive differences become both noticeable and significant. Depending on the manufacturer’s design, chip technology used, pixel size, sensor size, and other quantifiable and measurable criteria, one can readily measure and see advantages and disadvantages between cameras. 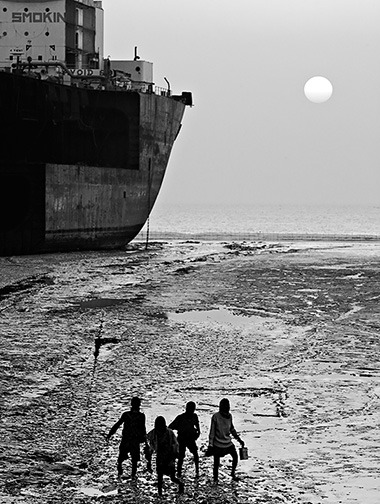 With the very rapid growth of interest in photography due to the digital transformation, many newcomers are flocking to the Net discussion boards, especially to the equipment-review oriented sites, looking for both buying and usage information. Regrettably, in addition to the usually very well done and comprehensive reviews found there, they also stumble into the forums, where quibblers and trolls are to be found.

Since on the Net there’s no easy way to tell a knowledgeable adult from an irrational teenager, (or at least those that act like them), it is easy for newcomers to become influenced by the silly and seemingly endless debates. A shame really, because all of this has little to do with the art and craft of photography. In my experience the ones that are heard from the most and the loudest are usually people with the least photographic ability and knowledge.

So – now that I have that off my chest (again), here’smyopinion. Before you take what you read on online forums as gospel, or even give it much credence, find out what you can about the writer’s experience, qualifications and biases. I have always made mine publichere. So at least you know where I’m coming from. The thing about opinions is that everybody has them, and unless you know what particular axe someone may be grinding you run the risk of being mislead.

The point of this minor diatribe is that if you’re new to digital cameras, and someone online comes along and says thatCamera Ahas better image quality thanCamera B, take the time to find out more about the testing conditions, and the qualifications of those proffering their advice. And in the end spend much more time finding out about a camera’s handling, ergonomics, features and functions – because as a photographer, these will be the things that affect your ability to produce satisfying images far more than the quibbles and minor difference between images of people’s cats presented at 100% magnification on the web.