A Digital Travel Kit
For Italy

The section contains information about the equipment taken and used on a trip to Tuscany in early 2001. It also has a number of images which don’t fit necessarily fit into the thematic approach of themain travel article.

As on that page the small images framed in red arenotlinked to larger versions. Yellow framed imagesdolink to larger photographs.

Two additional images can be found atItaly Redux. They are each strong examples of the incomparable light found in Italy.

When I travel for pleasure (as opposed to traveling todophotography —which of course is also a pleasure of a different sort) I usually carry a small rangefinder camera system and a couple of lenses. In years past it was anM series Leicaand then recently theHasselbladXPan. The small size, low weight and flexibility when shooting candids on city streets make an RF camera my preference. 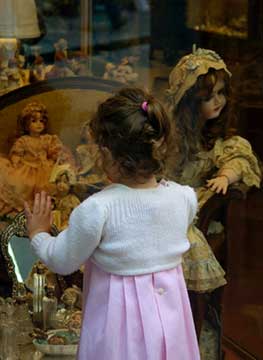 For this trip to Rome, Florence and Tuscany I faced a quandary. I had recently added theMamiya 7 IIsystem to my equipment arsenal. It was intended for use when doing landscape work where arduous or extensive hiking was involved, but it seemed to me that it would double as a great camera for street shooting and also for casual landscape work. I therefore spent some time planning on using it for this trip.

But after much to-and-froing before departure I decided to simplify even more than usual and take just a single camera and one lens; the digitalCanon EOS D30and the consumer gradeCanon 28~135mm f/3.5-5.6 ISzoom. More than 5,000 frames with the D30 since the Fall of 2000 had convinced me of the cameraÃƒ­s potential for quality images, and the 28~135mm lens had also proven its versatility. The XPan tempted as always but essentially I wanted to see how a consumer-level digital SLR and a single zoom would play out in the environment of a typical 2-week European vacation. 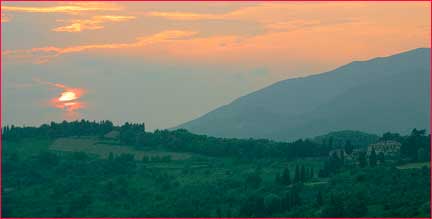 Yes, the XPan would have produced some dramatic wide-format images. True, the Mamiya would have produced much higher quality landscapes. But I had discovered that there is a unique sense of freedom when shooting digital in casual situations that I very much like, and I thought that a typical vacation setting for a serious photographer would be an interesting test of this combination.

The D30 / 28~135mm team worked out very well. As I had discovered when doing other types of shooting with the D30, such as wildlife work, being able to change ISO on the fly is a great asset. When street shooting, one minute IÃƒ­d be out on a sunny street at ISO 100 and quite literally the next minute I would be in a dimly lit museum at ISO 400 or higher. The D30 with battery grip is heftier than either an M Leica or an XPan, but not so much more so as to obviate its other advantages.

The 28~135mm lens also did yeoman service. While not as acutely sharp as myƒ¬LÃƒ® series lenses it does a fine job, and more than makes up for any minor resolution deficiencies by being extremely versatile for its weight and bulk—my main concerns on this trip. Also the slightly slower maximum F stop is compensated for by theImage Stabilization (IS)technology. 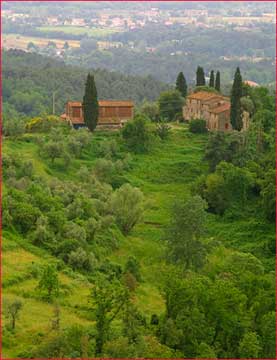 Thus, while I am a stickler for ultimate image quality in my landscape work, IÃƒ­m less neurotic about it when doing casual travel photography. In this situation light weight and low bulk equipment, ease of use and flexibility are paramount. My days as a photojournalist lead me to put the greater emphasis on simply getting the image in the first place rather than sweating the lines / millimeter issue.

At the last minute I also packed theSigma 14mm f/2.8lens. The D30 with its 1.6X focal length multiplication factor means that the 28mm end of the zoom I was going to be using would only be a 45mm equivalent. With the 14mm I would have the equivalent of 21mm—a usable wide angle. Though I didnÃƒ­t use the 14mm much, there were a few locations such as the interiors of churches where it came in handy. Also, the Sigma comes with a convenient belt pouch which coincidently will also hold the 28~135mm lens. This made swapping lenses simple and obviated the need for a camera bag when walking around towns.(After all one doesnÃƒ­t want to looktoo muchlike a tourist.)

A polarizing filter, extraMicrodriveand a tabletop tripod completed the kit along with battery charger for the D30. Oh yes, camera, 2 lenses, notebook computer, a GSM cell phone andIpaq Pocket PCall fit into a not too unwieldy carry-on bag along with passports, tickets and a book.Whew.

Landscape photography(at least the way I practice it)is a disciplined pursuit. It involves doing location research, visiting likely locales to judge the prospects and possible light and seasonal conditions, and of course selecting appropriate tripod spots that can be reached in pre-dawn light or returned from safely after dark.

It also means schlepping a great deal of equipment, including a wide range of lenses, heavy tripod and an assortment of filters and accessories. For me it usually means as well working in medium format rather than 35mm.

But traveling on vacation means being accompanied by ones spouse(whose patience for waiting has certain limits), encountering interesting locations by chance, carrying a minimum of equipment and likely being somewhere interesting at the wrong time of day and almost certainly the wrong season.

I used to frustrate myself by thinking that I could combine the two—vacationing and doing serious landscape work. I no longer try. What I try to do when on holiday though is my best at capturing images that say something about the place visited. Hopefully these are a bit more than snapshots, though certainly less than art. In any event, I try and have a good time doing it.

Whenever I return from a trip to Italy the inevitable question is—So how did you find the driving?This question is motivated by the universal fascination that visitors to Italy have with the Italian driving style, the roads and the signs.

Italians bring the samejoie de vivreto driving as they do to all pursuits. Or, maybe it’s aneveryman for themselvesapproach to the rules of the road. The one place where this isn’t true is on theAutostradawhere lane discipline is high. It has to be because even though there’s a national speed limit of 130 Kph you’d better stay out of the fast lane at that speed. Chances are that someone will want to pass you at better than 200Kph every few minutes. This is the case in Germany as well where there are no speed limits on certain sections of theAutobahn. But there the cars passing you at ballistic velocity are likely to be Porches and BMWs. In Italy they will just as soon be some little 1.4L econobox with the peddle to the metal.

My real point of discussion though are the road signs. Driving in Italy is a bit like a treasure hunt. Finding ones destination is as much luck as it is perseverance. Here are some things to consider:

While most major roads are numbered, these numbers areneverused in directions or signs. They appearonce you are on that road,neverbeforeyou get to it. This means that if someone says "Take highway #12 to get from Lucca to Pisa", there’s no point in looking for road signs directing you to Highway #12. They simply don’t exist.

In Italy road signs tell you thenamesof the towns that are coming up. Sometimes the name of the next town, sometimes the one after that, or sometimes a city that lies hundreds of kilometers in that general direction. Consequently you need to have a good map and to memorize the names of what lies ahead—from hamlets to large towns.

On the whole this direction signage is good, but occasionally the name of the town that you’ve been following disappears and another takes its place, even though you’re still on the right road and quite a distance from that town. You also need to be a speed reader and great memorizer. Direction signs are usually located 100 meters or more before an intersection or traffic circle, sometimes around a blind corner. They can list 6, 8 or more different town names. In fast moving traffic you need to quickly identify the direction you need to turn, because once you get to the intersection you’re on your own; no more signs and lots of choices.

Finally, while in North America we use the convention of an arrow pointing straight up forstraight ahead, in Italy the arrow will point either left or right and the sign will be ever so slightly oriented in that direction. If there are multiple roads coming out of an intersection (which is usually the case), it’s up to you to guess which of them is the correct direction. Like I said, it’s a bit like a treasure hunt.The advantage of this system though is that you get to see parts of the country that you otherwise might have missed.

What Cameras are People Using?

Being a tourist in Italy for 2 weeks meant lots of sitting in outdoor cafes on piazzas watching the passing parade of tourists as you sip a cappuccino. Being a writer on most topics photographic I decided to turned this into a bit of a game.

I did a visual poll of what types of cameras people were using,(This was in May, 2001). Here are the results, with a margin of error of about 25% on any individual number.(Precision without accuracy, like most statistics).

I was surprised at the popularity of 35mm. There was a lot of discussion about the demise of"serious"cameras a few years ago, but it seems that there’s been no diminution of interest in quality equipment.

Canon was by far the most prevalent brand, possibly 75% of all 35mm bodies that I saw. Nikon was next and then a bunch of older bodies—including a surprising number of Minolta SRT-101s from the 60s and 70s.

I was also surprised at not seeing more point-and-shoot digital cameras. Certainly the interest online and in magazines seems to be there, but where the Birkenstocks meet the piazza they simply weren’t there.

My final highly unscientific observation is that the 35mm camera users were in large measure British. American tourists seemed to favour disposables and basic point-and-shoots, and French and German tourists seemed to be carrying video gear, mostly the new generation of small digital video cameras.(When I couldn’t hear what language people were speaking I would guess at their nationality by dress and demeanor. Very scientific.)

Even assuming a modicum of accuracy to these observations I still haven’t a clue what this tells us. But, everyone loves cappuccino.