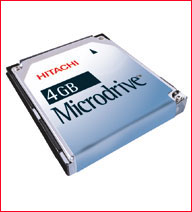 Photographers seem to be divided into two camps — those who loveMicrodrives, and those that hate them. I fall into the first group. I have six 1GB IBM Microdrives and have been using them since they first became available about 3 years ago. I have never had a failure over many thousands of frames in a half dozen different cameras.

But, I know that some photographers have had less inspiring experiences. Nevertheless I’ve decided that based on my experience so far, from below sea level to 12,000 ft; from -30C to +45C, in the Arcticandin the desert — I’m sticking with them. In fact I just purchased two of the just-releasedHitachi 4 Gigabytedrives and have started using them as my primary cards in theKodak DCS Pro Back 645and also in myCanon 1Ds,Canon 10D, andCanon S50.

One of the main benefits of using a Microdrive is price. When theIBM 1 GB Microdrivefirst came out it was the largestCompact Flashcard available, and cost approximately $500. Now, less than 3 years later theHitachi 4GBcard also has an initail list price of $500.Moore’s Lawat work. (A new 2GB card is also available from Hitachi).

This makes the cost per Gigabyte under $125.

The only other CF card with this capacity is theLexar 4GB 40X WA,with a typical retail price of about $1,250 — considerably more than twice as expensive as the Hitachi.

So, what’s the deal? Other than price, why choose one over the other, and is there any reason not to choose the Hitachi 4 GB? Indeed, with a 4 GB card are we putting too many eggs in one basket? 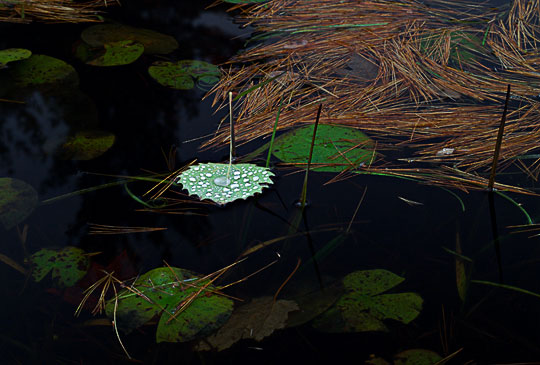 Before looking at anything else we need to understand that not all cameras will be able to use 4 Gigabyte cards. To address this much disk space (anything above 2 GB) the camera’s disk controller needs to recognize FAT 32, while most cameras can only read and write FAT 16. (FAT stands forFileAllocationTable, and refers to the manner in which data is written to a disk drive). Hitachi publishes a continuously updatedComparability Matrix, but here’s a partial list of the most common DSLRs that are currently guaranteed compatible…

But guaranteed compatibility doesn’t necessarily mean that everything is without issues. For example, myKodak DCS Pro Backworks fine with the Hitachi 4GB card, but instead of the back showing its ability to hold some 200 images with this card it only shows 91, and doesn’t begin to update the countdown from 91 until some 120 frames have been exposed. A small bug to be sure, but potentially confusing.

The reason that I purchased two4 GB Hitachicards is because my Kodak medium format digital back only can record about 50 RAW files on a 1 GB card. This means too frequent card changes, necessitating frequent downloads in the field. With the 4GB Microdrive I can get over 200 frames on a card, and with myCanon 1Dsthis means over 400 exposures on a card.

In the case of the 1Ds this may in fact be too many eggs in one basket. A drive failure, unlikely though it may be, could destroy too much data. But, there are times and places where the risk is worthwhile. In January, 2004 I will be leading a photographic workshop / safari in Africa. This is the dry season inTanzaniaand the dust is terrible. Anything that can be done to reduce the number of times the camera’s innards need to be exposed to dust is worthwhile. (For example, also not changing lenses in the field). So, like with almost everything else in photography we make compromises.

On theCanon 1Dseach wrote 10 files to disk in approximately 3.5 seconds. On theKodak / Contaxeach was able to write 1.5 FPS up to the back’s buffer maximum. For applications such as mine I see no significant speed difference between them.

Eventually, when dealing with Microdrives the conversation always returns to the question of reliability. The thought of losing dozens or even hundreds of ones images is scary, to say the least. And obviously the bigger the card the more chance there is of losing a critical file. On the other hand one can’t become too paranoid. Nothing is foolproof. Labs can accidentally destroy film. Precious negatives can become scratched, lost in the mail, or have coffee spilled on them. Life is full of risk.

As mentioned earlier, though I have had zero failures from 6 Microdrives over 3 years, some people have. My colleagueSteve Kossackhad a 1GB Microdrive fail on a shoot we were on together in the Rockies. But, I also know of photographers whose solid state cards have failed.

Hitachi claims to have addressed some of the areas in which the original IBM drives were problematic. They have increased the thickness of the rubber wall around the drive mechanism and have moved the disk itself to the pin end of the card so that it runs less of a risk of being squeezed by the user when removed from the camera, (the most common cause of Microdrive failure, according to Hitachi). Overall robustness of many of the drives components has also been increased.

There you have it. 4 Gigabyte cards can now be purchased for less than cards a quarter their capacity just a couple of years ago. You can now hide in the palm of your hand the amount of data that used to fill several large floor-to-ceiling sized cabinets not that many years ago. But you also can drop it on the road or forget to remove it from your jeans before putting them in the washing machine.

I’ve decided that the risks are worthwhile. You’ll need to draw your own conclusions based on your particular needs and shooting requirements.

Hitachi 4 GB Microdrivesare currently available from selected photographic retailers at $499 or less.B&Hhas them in stock as of early November, 2003.

Probably the question that I read and hear most often, online as well as on my workshops, is —How did you get that shot?! Man,