Ian Lyons is the publisher ofThe Computer Darkroomand one of the Internet’s leading authorities on colour management and Epson inkjet printing. He clearly is also a talented photographer. This portfolio shows the work he produced with theCanon D30duringThe Luminous Landscape Master Classin April of 2001.

From April 3rd through to the 11th, 2001, I had the pleasure of participating in aLuminous LandscapeMaster Classwith Michael Reichmann and three other Photographers, Steve Kossack, Jonathan Sachs and CC Lockwood. We were also joined by two of Michael’s friends, Chris Sanderson who would record the master class on video forThe Luminous Landscape Video Journal, and Milton Woolley who assisted with logistical support.

We met in Las Vegas and were headed for a 5 day shoot on Lake Powell.   However, along the way would have the opportunity to spend a few days shooting in Zion, Bryce and Grand Staircase Escalante National Parks.

Coming to the USA from Belfast, Northern Ireland as I do required some considerable planning. Direct flights to Las Vegas are like hens teeth and so my route took me via London and Chicago, some 23 hours travel time, each way!

After much soul searching I decided that bringing my Mamiya 645 outfit was likely to prove extremely difficult. Therefore, I just brought a pair of trusty Canon EOS 1n camera bodies and my latest acquisition, the Canon EOS D30 digital SLR complete with 1 Gigabyte Microdrive. As it turned out the D30 also doubled up the group light meter.

Our journey began around lunchtime in Las Vegas and after some 3 to 4 hours driving we made our first stop, and what a stop it was to be. I have long wished an opportunity to photograph Zion National Park and here I was in perfect lighting just in time for sunset. 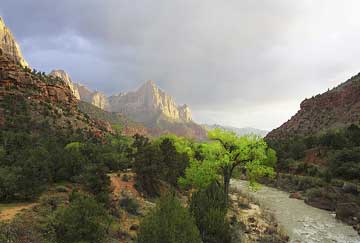 Day 2 began early, as in 5.30am early (Yawn!). A Zion sunrise was our aim, but alas not to be. Nevertheless, a few good shots were taken. 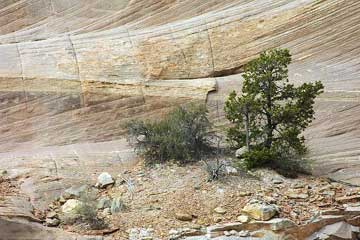 The remainder of this second day saw us driving through some of the most awe inspiring landscape country I’ve ever seen. Red Canyon, Grand Staircase Escalante, Deer Creek, Muley Twist Canyon and Capitol Reef to name but a few. 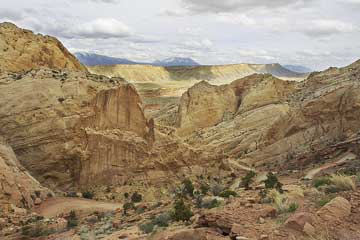 Our first day on   Lake Powell began with us coasting our houseboat down through what had been Glen Canyon until the canyon had been flooded. Our plans were to concentrate on the Escalante arm, but on the way, we decided to overnight in a secluded canyon called Bowns. Other than a small cascade I found little of interest in Bowns and didn’t waste too much film. 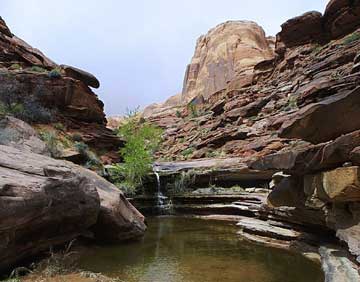 The second day on the lake was something special. We traveled to the Escalante arm itself and moored the houseboat in a short canyon by the name of Davis Gulch. I don’t recall exactly how many rolls of film I used, but it was nearly into double figures. Morning and early afternoon were spent in the gulch, and in late afternoon, we took the speedboat back down the canyon to an arch called Lagorce Arch. 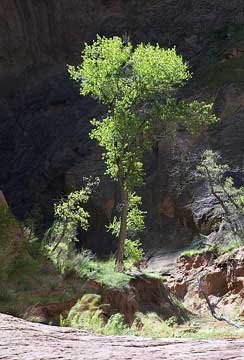 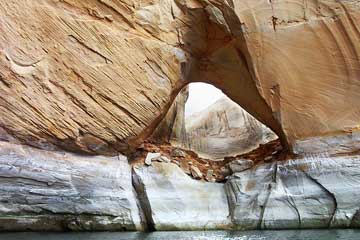 The jury is still out on Lake Powell day 3 and 4, but for me the images I captured equaled those of Davis Gulch, for others in the group? The morning of the third day began with us traveling to Explorer Canyon. We hiked this canyon most of the day and many memorable images were captured. First thing next day we set off to explore the farthest end of the Escalante arm.

The lighting bouncing of the red canyon walls was incredible. By mid-morning we had retraced our route though the Escalante arm and back into the main lake area. Our destination was to be Iceberg Canyon. This canyon splits into two arms, the main arm and the natural dam arm. We moored the houseboat in the later and began our usual investigations. 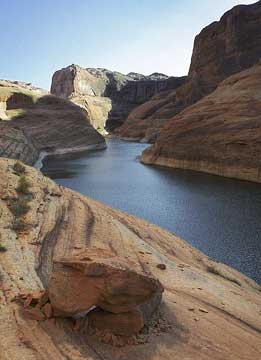 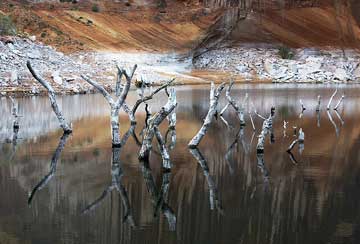 Our last day on Lake Powell was to be memorable for the sunset that ended the day. All through our travels on the lake, we had been trying to capture a sunrise or sunset. The high canyon walls always beat us, but on this last day we moored in Moki Canyon and unfolded our battle plan. A high vantage point was pinpointed and a mooring point identified. On arrival, CC Lockwood and I made for the highest ground some 100 feet above the lake. Michael, Steve and Jonathan shot their pictures from a lower level. 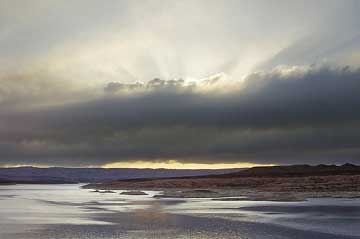 As always, all good things must eventually end. However, for the magnificent seven this end was to be via Bryce and Zion National Parks. The trip to Bryce was an adventure in itself as we battled our way through a snowstorm, taking a 130-mile detour to avoid the worst of the weather. I’m told that a good Bryce sunset with snow is apparently something special. Unfortunately, my sunset might not make the A-list but it will satisfy me, until next time! 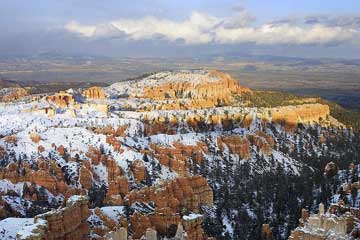 The final day of the master class was a return trip to Zion National Park. As with the first day pictures were plentiful, but rarely spectacular. This last image is one of the better ones captured on the D30. I hope that the images captured on film are better. 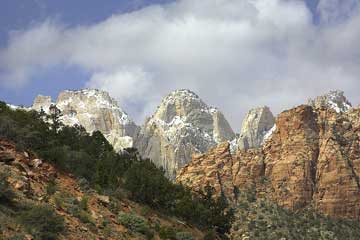