I read with great interestMark Dubovoy’s accountof using his S2 in Africa instead of the usual big lens DSLRs. By sheer coincidence, I have been out of the country too, putting my S2 through its paces as a travel camera on a workshop in Western China and I thought I’d share some of my experiences – listed here in no particular order. 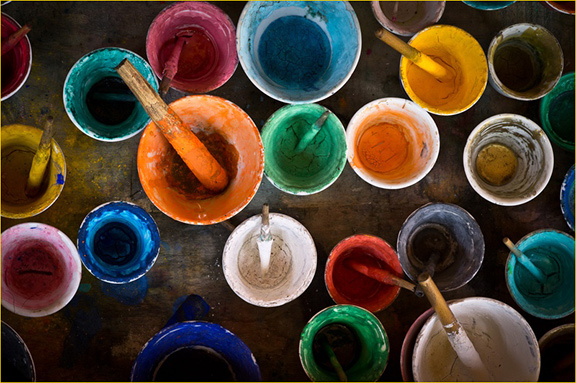 I gave a great deal of thought as to which of the four lenses to take. It’s nice to have a bit of ‘reach’ so the 180mm was a contender; the 35mm was a no-brainer, and that left the other two, the 70mm and the 120mm. Taking all four was not an option because, whilst the camera itself is not heavy, the lenses are relatively bulky and contain a lot of glass. All four, plus the body, would have cause potential hand luggage weight issues on the multiple flights I would be taking so I decided to take just three. I ended up taking the 35mm, 70mm and 120mm macro – I left the 180mm at home because whilst I thought I might need the extra reach, it’s a very unforgiving lens to handhold.

As it turned out I was correct: in fact I didn’t even use the 70mm once, shooting over 3000 images with the only the 35mm and the 120mm. I found that I was either shooting wide-ish shots of temple interiors and scenery, or I was shooting portraits and details. If I needed wider, I shot two side by side images on the 35mm, and if I needed to fill the frame more I simply went closer.

I used a newBlack Rapid strapso the camera hung on my hip, ready for use, and the other lens went into my waistcoat pocket. Add some spare cards and I was actually working lighter than I would have done years ago with two Canon bodies and four or five lenses.

Did I miss shots? Probably, but you can never shoot every shot that you see and just using the two lenses was simply not as restricting as one might imagine. 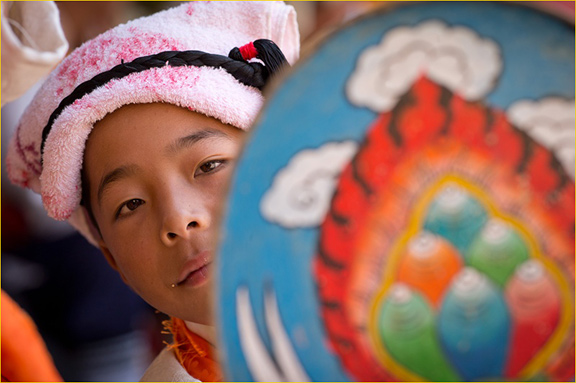 If I am honest I’ll admit to missing a fast motordrive – sometimes expressions and glances are fleeting and a quick burst of three frames can be just what you need. My S2 runs slightly faster than one per second so a burst is not an option. The shutter button is very responsive however, so it was a matter of timing and reaction rather than shooting a burst.

In the hand the camera is superb. It’s not at all tiring to use, it fits my hand beautifully, most of the controls are where I need them and I simply enjoyed using it. This is a good thing because if you don’t like using a camera you simply don’t get good shots. The process of shooting becomes a pain and you are forever being frustrated by handling issues.

That’s not to say that the camera is perfect, it’s not. There are two main issues for me, neither should be too hard to address in future firmware upgrades ( and we just had a new one which is a small step in the right direction).

Firstly, I really want to see the ISO setting in the viewfinder display – the top LCD screen shows it, but it’s frequently unreadable in even modest lighting and I want to know where I am at with ISO without having to use the menus. I have the ISO menu access assigned to a rear function button (top left) so it’s as quick to access as possible, but I need to see it in the viewfinder. It’s so easy to forget that you have jacked it up to 640 for a shot or two, and then go and shoot some bright light shots wondering momentarily why the exposure is more than you were expecting. Seeing it in the viewfinder is a constant reminder and it would be feasible to alter the ISO without taking your eye from the viewfinder.

Secondly, and this is a biggie, I like the auto exposure facility a lot but the exposure compensation is only accessible via the rear screen menu. It needs to be operable without taking your eye from the camera’s viewfinder, something so many other cameras allow you to do. Given that the rear control wheel is clickable, I’d love to see it used to access exp. comp. by a click and hold, or something. I know I can use manual exposure to achieve the same ends but the auto is so good that I prefer to use it where possible, particularly in a travel situation where shot opportunities can be fleeting. 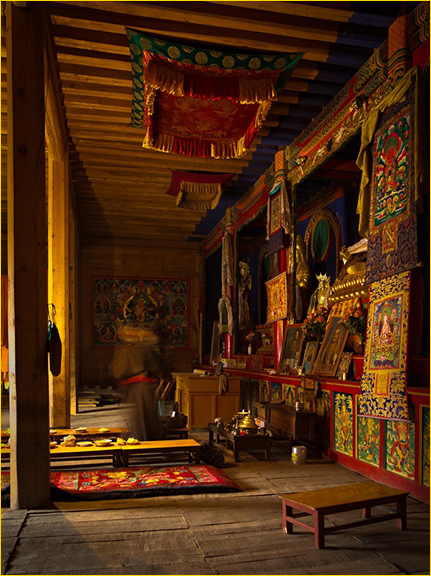 I have read forum posts casting doubts on the S2’s AF ability. Well, I have not had any issues at all and would go so far as to say that for my camera body at least, it nails the shots time after time, even in low light. It’s not as flat-out fast as some smaller cameras, sure, but it’s bang on accurate and when you are shooting portraits at ISO640 at f/2.5 the focus had better be spot on the eyeball or the shot is unusable. My success rate was very high – if I pointed the AF point at someone’s eye, then the AF would nail it almost every time. Softness in some of my shots was usually due to camera shake or subject movement rather than actual AF errors.

Being fast lenses, f/2.5 for the 35mm, 70mm and 120mm, the viewfinder is big and bright. Lots of light entering the camera helps the AF be accurate but even manual focusing is easy because brightness and  wide-aperture limited DOF means that the focus point is very easy to judge. If the subject is relatively static I use AF, if the subject is moving around and I have to follow the focus, I tend to use manual focussing, not because it’s necessarily more accurate but because if the camera loses the AF lock, particularly with the 120mm, the lens will hunt right through it’s focus range which, being a macro lens, take ages.

The AF is accurate. But it is not foolproof, nor can it work perfectly in all situations. I have gotten used to its limitations and can comfortably work within them. It’s not that good at follow focus so I rarely use the continuous AF feature. But then again, I’m not shooting sports or fast action – for travel work it is just fine.

I try to use 160 as much as possible, but in the real world having access to 320 is very useful and I can see very little difference in the final prints. 640 is also great – I have made plenty of 20×30 inch prints from images shot at ISO640 to be able to tell you that I am perfectly happy shooting at this ISO. Almost 40MP of detail at a genuine ISO640 is a real boon in a travel camera.

In a word, and as you’d expect, awesome. The lenses are as sharp as anything I have ever used, no caveats here. Nail the focus and the subject’s eye at 100% is so sharp you can cut yourself –even at f/2.5. Amazing. In fact I have nothing more to say on this subject, the lenses are, for me, perfect. 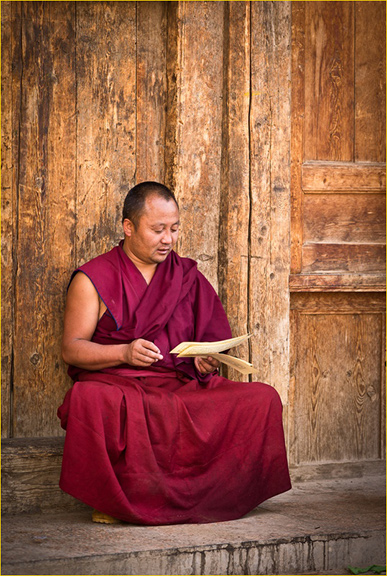 The extra sealing and robust construction pay dividends. We worked in hot dusty conditions for 12 days. Not once did the camera falter, and I am not one to coddle my gear. it swung around on my hip through tight scrums of festival participants, cooked in the sun, bounced around in our bus on dodgy roads and took it all in its stride.

I get over 1,000 shots from a single charge, some people have reported getting 1,500. All I know is that the battery meter shows almost full at the end of a long days shooting. I’m not a particularly prolific shooter and my biggest day, according to Lightroom’s metadata filters, was 555. The battery meter still showed 80%. I always charge batteries at the end of the day, so I have never measured how many shots I could have taken – all that I know is it’s lots. 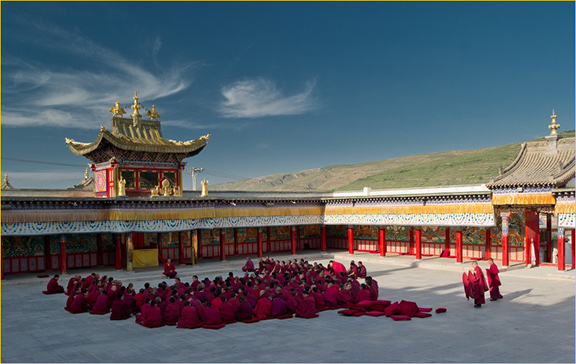 I had an M9 with me on my trip. I love this little camera for is discrete use and stunning results. But, I’m not an expert in its use and whilst I’d love to polish my rangefinder skills I need to get the shots in the bag. The S2 gets the job done. Bringing 37.5MP of quality to travel photography was always going to be interesting but the S2 has come through unscathed and with flying colour. I have many hundreds of keeper images of uncompromising quality far beyond what a conventional DSLR can produce. The S2 will be my go-to camera on my next overseas trip – China (Yunnan) next year and, in July,  a repeat of the workshop I just did, Qinghai Province – Tibetan Shaman Festivals.

By Richard SextonGet the most of the best to the greatest number of people for the least.-- Design credo of architect and furniture designerCharles Eames