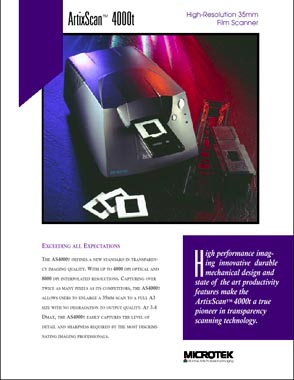 August 2, 1999:Here is the latest information from Microtek on the ArtixScan AS4000t.

Thank you for your inquiry regarding Microtek’s soon to be released ArtixScan 4000t – high resolution film scanner. This scanner will beavailable for purchase in mid to late August. If you would like moreinformation about the AS4000t please contact Microtek’s customer support department at 800-654-4160 between 7 am and 5 pm pacific standard time.

Thank you for your inquiry,

June 30, 1999:  One of our readers has just provided me with information on a new high-resolution scanner from Microtek.  Called the ArtixScan AS4000t, it joins the Polaroid 4000 as the second scanner on the market with 4000 DPI of optical resolution.

Curiously, at this time Microtek does not appear to have officially announced this new scanner.  Their web site does not have any information, nor do there appear to be any press releases available.

But, it is real, and likely to be forthcoming soon.  Clickhereto download a 2 page PDF brochure.

(If you do not have a copy ofAdobe Acrobatinstalled on your computer, clickhereto download it now.)

If you’d rather not download the brochure, below are the vital statistics on this scanner.

Otherwise, the AS4000t specs out very similarly to the Polaroid 4000, including the type of film and slide carriers as well as availability of an APS carrier option. While it’s only conjecture, it might very well turn out that either Microtek makes the Polaroid model, or that Polaroid makes the Microtek on an OEM basis.  In either event, if the Microtek model’s price turns out to be correct it will undercut the Polaroid by many hundreds of dollars.  This should make for an interesting market.

To read a review of thePolaroid 4000 scanner, clickhere.

As more information becomes available prior to a general press announcement it will be reported here.  In the meantime, join the discussion on ourForumunder the Digital Imaging topic section.

Fall ’99:This scanner is now shipping at a somewhat lower price than the Polaroid 4000, which is consequently being offered with a $200 rebate.