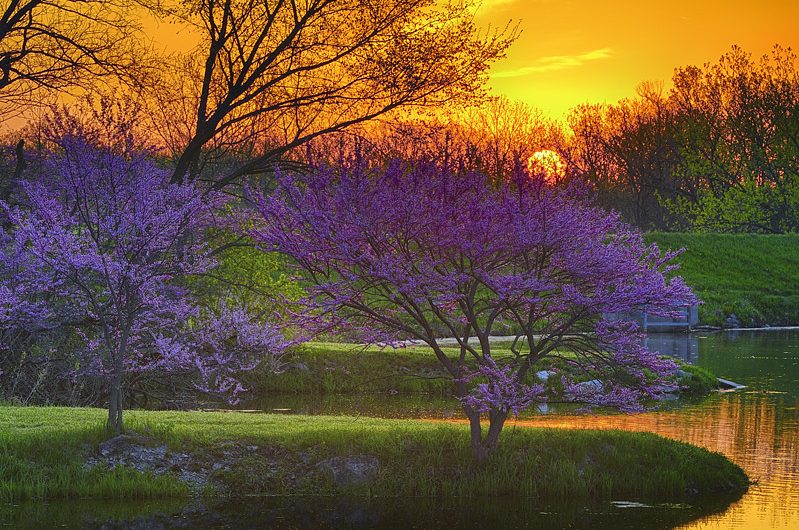 After the dreariness of winter begins to subside, the promise of Spring can be sensed in the warming and greening. The anticipation of blossoms grows with each day’s dawning, with an underlying eagerness to experience the sensations of rebirth and new possibilities.

For many of us, the royal colors of the Red Bud are among the most palpably anticipated.  Their brief lives emerge almost overnight and tantalize for a mere fortnight.  Although one can encounter at random the occasional bushy delight in a city neighborhood or nearby park there are few places where Red Buds can be found in congregate.

In Iowa, there is one location where one can find a congregation of Red Bud tree/bushes to satisfy with acres of viewing opportunities.  And as an added inducement they populate the shores and roadways of a small lake.  The name of the location is Red Haw State Park – a well-deserved appellation given its preponderance of Red Bud and Hawthorne trees.

The park’s location in the south-central part of the State is only about a two-hour drive from my home base. But given that sunrise arrives at 6:00 am at this time of year, I chose to make my visit an overnighter.  This afforded the opportunity to scout the park for an optimal site for the dawn image I visualized from a previous year’s visit.  I had literally anticipated this capture throughout the subsequent year, having been frustrated in my late arrival for the colors in that earlier visit.  Adding to that frustration was this year’s three-week delay in Spring’s arrival.

The Roman philosopher Seneca said, “Luck Is What Happens When Preparation Meets Opportunity”.  I was determined this year to be prepared for such an opportunity.  In my pre-visit preparation, the Photographer’s Ephemeris provided the position and direction of sunrise. Upon arrival the afternoon before the anticipated shoot, my hand-held Garmin etrex provided on-site-specific assistance in establishing an optimal location.

As “luck” would have it, opportunity presented itself with a delightful combination of lake, land, and Red Bud directly in the path of the next morning’s sunrise.

Having established my objective I returned the following morning at 5 am to begin setting up.  It was delightfully calm.  Since the composition would be shot backlit with deep shadows in the foreground, it was necessary to set up for an HDR process to balance the ultimate exposure. Beginning at 6:04 (before the sun appeared) I shot 5 bracketed frames at ISO 100, f/16.0, from 1/15s to 1.0s. At 6.09 I shot 5 more frames to judge the light change from 1/40s to 0.4s.  And finally at 6:14, shooting in continuous high mode (ISO 100, f/16.0) I shot 7 bracketed frames (-2.0 to +2.0) from 1/250s to 1/4s.  All shots were in Nikon Raw format.  This set was followed by two more sets of 7, but as the sun began to rise above the tree line it dominated the Red Buds unfavorably.  By 6:17 my objective had been accomplished.

The RAW files were converted to .tifs in Nikon’s Capture NX 2 as captured in camera.  Those tifs were then combined in Photoshop CS5 using the NIK pluggin HDR Efex Pro 2.  In the HDR process, the ‘default’ setting was chosen with no further adjustments as it all but perfectly captured the scene as I witnessed it.

Although I felt pretty confident that I had captured the scene at 6:14, my initial confidence became giddiness when the 7 frames coalesced in HDR Efex Pro 2.  It’s a rare circumstance when some additional adjustments aren’t needed to corral the range, color, and contrast in bracketed shots.  It’s rarely my objective in HDR to accomplish more than controlling for saving shadow detail and calming blown-out highlights.  I’ve never been a fan of the HDR processing that produces garish interpretations of a scene.

See all articles by Midnight Rainbow

The 'Midnight Rainbow' series is a curated selection of submissions from the LuLa community. Photographs are chosen for their compelling story behind the capture. May you find the light, even at midnight.

Congratulations, You are an Artist!

FacebookTweet Photographers are remarkably resistant to the idea that they are artists. Not every photographer, of course, but in a group of photographers you’ll usually

Sky: Looking Into The Landscape’s Soul