My Own Private Rhino

African Travelers, photographers and non-photographers alike all have a check list, lions, elephants, leopards, rhino’s and so on down the list of Disney animals, those of us who live here also have our check lists. Not too long ago I received a call from my French buddy Guy, “We have a new baby Rhino”. That simple sentence began a quest of sorts, to take THE white rhino mother and baby picture. I was after something photographically transcendent, something epic, an image I could turn down a pile of money from the National Geographic Society for (I may be waxing lyrical here; rest assured I’m not that far gone). Six afternoons, two mornings and something on the up side of 30 hours later I think I got there.

This may be hard to believe but Rhino’s are damn hard to shoot. A momentary digression: as a nomenclature white and black are meaningless. It’s more accurate to refer to them as hook-lipped and square-lipped. Hooked eat brush and are commonly psychotic (Charles Manson), aggressive (Rambo), man, beast and vehicle stompers. They are the smaller of the two species at a shoulder height of 5 feet and around a ton. Their gentler saner cousins eat grass and run away from trouble rather then looking for it.  But they are taller 6 feet at the shoulder and much, much heavier, think 1950’s Buick Special and you’ll have a good idea. 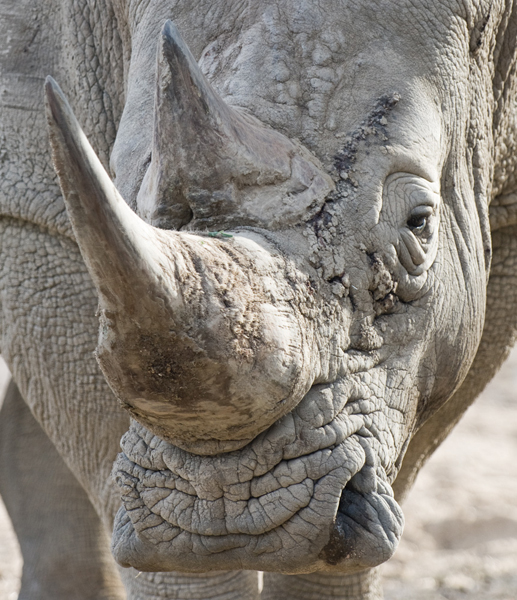 To be generous both are ugly, trying to capture an image that is flattering is trying, compounded by their tendency to just stand. Day after day I always seemed to be too close, too far, they were going away from me, mom was blocking the baby, half in and half out of the sun, deep shade, blocked by a tree or an errant clump of grass, shrubbery, baby too far from mom, mom looking the wrong way, wind shifts blowing my “clean fresh scent speed stick” up her nose, poof ghost like, gone, and on and on and on, six days and about 1000 pictures later I had some good stuff but not “the shot”.  Day three I got this, it was an amazing display, the baby just started running, back and forth around mom, perhaps she knew that soon she would lose her speed, her lightness of being, the joy of being petite and able to defy gravity, replaced by life’s unavoidable weight. 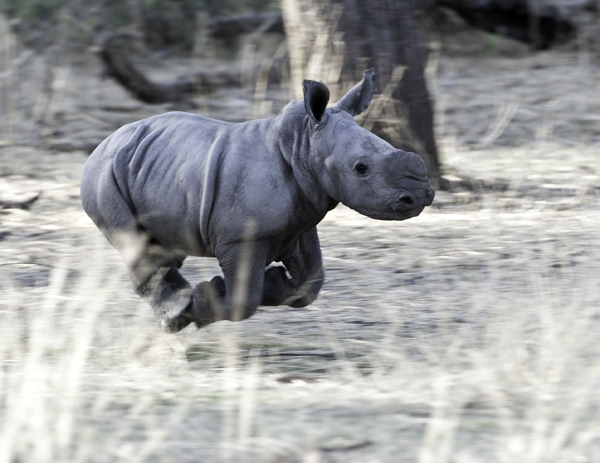 I got this day 4, in order to compress these shots most of the color information is discarded, it’s a warm backlit Namib Desert sundown. 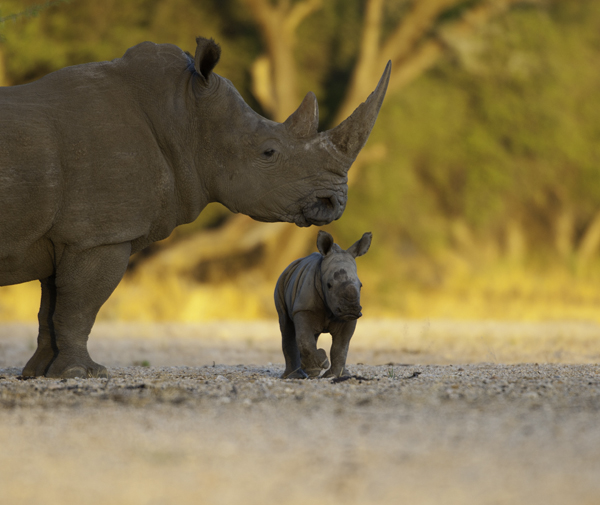 Day 6 started well, we got down wind on a river bed as they approached, as long as we were quiet and in the vehicle they largely ignored us. 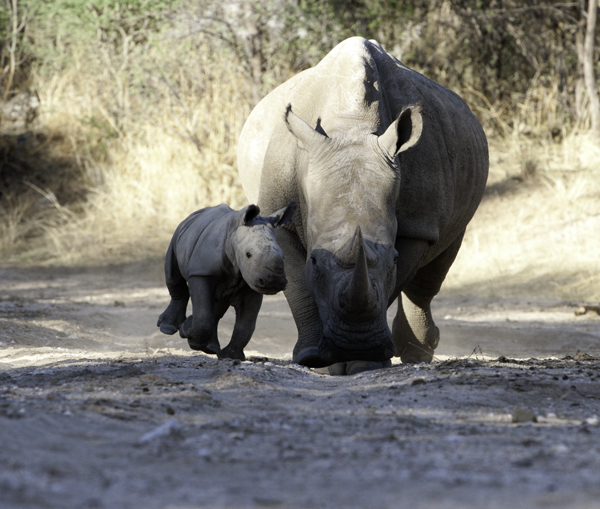 A few minutes later they passed very close to the truck, turning up the bank behind us, heading for the water hole. We followed, but once again found ourselves on the wrong side of the light. The water hole only has one way in through a cut bank. I saw that I couldn’t get to the right side of the light, but I thought I could get positioned to capture something special as they came back out the cut bank into the river. That’s where I took this which is the shot I wanted, steady mom, scale, texture, child in motion, sunset desert dust. 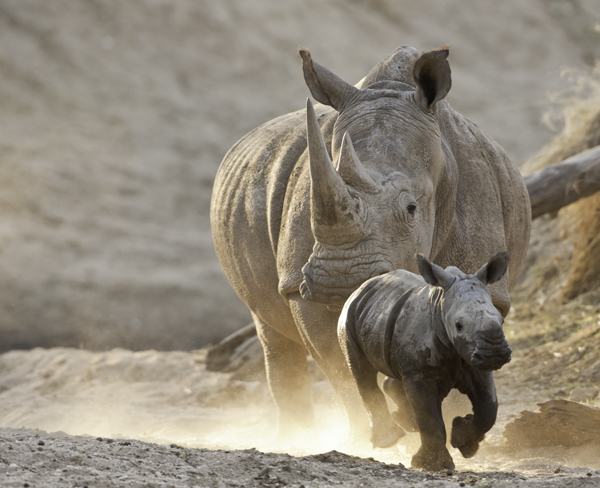 Then it got interesting, I had positioned myself across the river from the water hole, down low next to a burnt out tree. I figured they would come out the cut bank and turn up stream away from the truck; instead they came right at me. As is the norm with square lipped mothers, the baby was in front, they fear attack from behind and little from the front. I froze until she was about 20 feet away and then I knew I needed way more tree between her and me and moved, she charged, stopping just less than 10 feet away, the tip of her horn almost within arm reach.  I can report the following, their horns are well polished and the tip seems exceedingly sharp. Time stopped, she spun and left at speed. My heart started again.

Guy took this as she turned to leave. 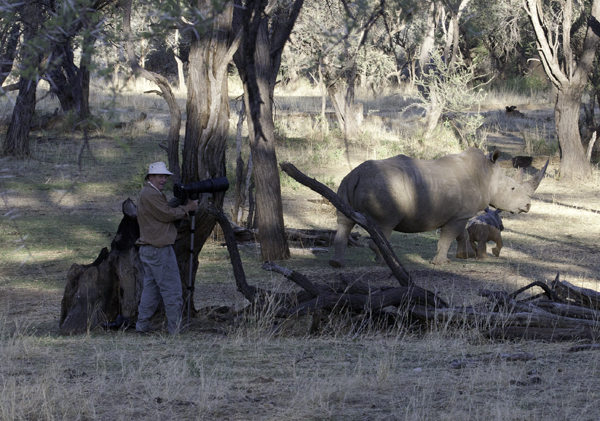 That afternoon was amongst the best days of my life, Africa at its finest, all my pipes got flushed with a massive shot of adrenaline, fear came later in equal amounts with the elation of being alive and privileged to be so close to such a beast. On our way back to the lodge our paths crossed once more. I would like to think I was already forgotten, all the while certain they would never be. 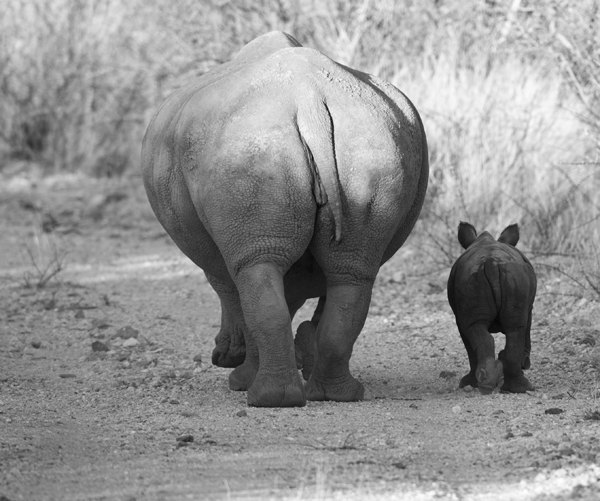 Chris Johnston is a retired geologist and colored gemstone miner, self taught photographer, who lives at the edge of the Namib Desert in the hamlet of Omaruru in central Namibia.  More of his work can be seen the Chris Johnston Photography Gallery at 116 Wilhelm Zeraua Street Omaruru.

See all articles by Chris Johnston

Chris Johnston is a retired geologist and colored gemstone miner, self taught photographer, who lives at the edge of the Namib Desert in the hamlet of Omaruru in central Namibia. More of his work can be seen the Chris Johnston Photography Gallery at 116 Wilhelm Zeraua Street Omaruru.