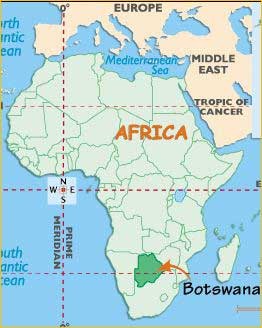 TheOkavango DeltainBotswanais the world’s largest in-land delta, formed where theOkavango Riverflows out ofAngolainto theKalaharidesert. If offers a profusion of wildlife, wonderful photographic opportunities, and a politically stable country with great lodges and camps, in all price ranges.

In September, 2008, along withAndy Biggs, I lead a photographic group to Botswana ona two week long shootthat took us to three separate camps within the delta. The images below are selected from ones that I took during that trip, and brief descriptions of the shooting situation, equipment used or image processing applied are detailed.

These and other photographs from Botswana will be in a new exhibition to be held atThe Luminous Landscape Galleryin Toronto in early December. Details to follow. 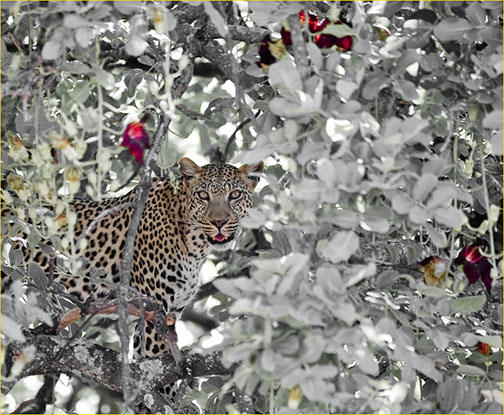 We were extremely fortunate in that over nine field shooting days we had four separate Leopard sightings. One of them, the one during which this shot was taken, lasted for almost two hours and was described by one of our local guides as the best he’d ever seen.

During that time I took a great many frames as this female sat in asausage tree– their favourite hang-out – watching nearby game. She subsequently left the tree, did some stalking, and climbed onto another tree. But, this particular frame was among the first that I took of her.

It was shot with theNikon 200-400mmlens, which was used for more than 90% of the roughly 7,500 frames which I shot during that almost two week period.

For this image I greatly reduced the green saturation inLightroom 2.0giving the foliage an almost infrared look while leaving the Leopard herself unaltered. This creates for me a compelling isolation of this magnificent animal from her camouflage surroundings. The out-of-focus red areas are simply the tree’s flowers, also unaltered. 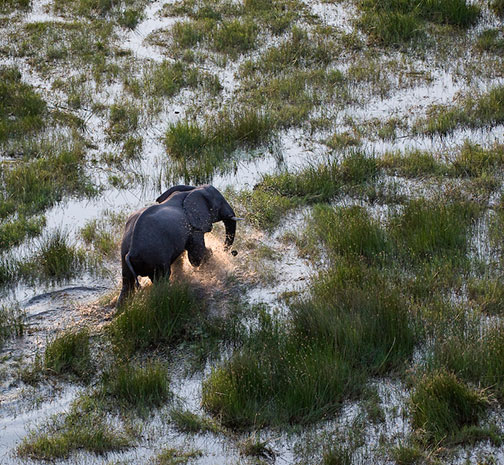 One of the highlights of this safari was that we rented aBell Jet Rangerhelicopter with the doors removed so that each of the trip’s members could have two separate one hour long shoots over Okavango – a morning and an evening session. This is the same helicopter company that provided aerial services to theBBC Planet Earthseries while they were filming in Botswana.

By the way, if you haven’t seen this series onDVDand especially Blue Ray, run – don’t walk – to your nearest video store. Absolutely amazing photography from some of the world’s best locations.

The above photograph of a bull elephant moving swiftly though the delta marshland just before sunset highlights two technical aspects of this shoot. The first is that I chose to use my Nikon system on this trip, rather than my Canon gear.

Firstly, I wanted to useNikon’s unique 200-400mm f/4lens. Based on past wildlife shooting experience in Africa, though I’d not used it before I was certain that this lens would be ideal for my needs. It turned out to be the case, and this lens, along with a Nikon 1.7X extender when needed for extra reach, was used for the vast majority of all my shooting in Botswana.

Not to put too fine a point on it, but this is a simply astounding lens. Yes, it’s big and heavy, but I found that I could handle it as easily(!?) as a 500mm f/4. The weight and bulk are worth dealing with because throughout its range this lens provides superb image quality, not only resolution but also contrast. It does vignette a bit wide open at f/4, but like most super-telephotes it is as sharp wide open as stopped down, a critical capability because game is most active at the edges of light, in the early morning and early evening. Having a wide aperture as well as long and variable focal length is critical for this type of shooting.

Regrettably, though Canon has some very fine super-telephotos in the 400 – 600mm range, none are zooms. A lens in this range from Canon has been rumoured for some years, but its lack in the Canon line-up leaves a hole which no other lens or combination of lenses would have satisfied for me on this shoot.

Botswana can be very dusty, especially in early spring before the summer rains, which is when we were there. Changing lenses risks sensor dust spots, especially with the D3 which does not have auto dust removal capability, and so using a zoom was beneficial. I only took the 200-400mm off the D3 a few times, and then to put on the 1.7X extender. Each time I did so dust became an issue.

I also chose the Nikon D3 instead of my Canon 1Ds MKIII, even though this meant 12MP files rather than the Canon’s 21MP files. The reasons are twofold. One is the D3’s 9 FPS capability. Shooting wildlife requires high frame rates, and with large 9FPS bursts I was able to capture moments and expressions which might otherwise have been missed. Yes, the 1D MKIII would have provided similar high speeds, but with still lower resolution and without the D3’s remarkable high ISO capability.

Much has been made of the D3’s high ISO files, by me and other observers, and rightly so. With a safari’s frequent low light shooting conditions I often found myself shooting at ISO 3000 and above, and with the Nikon’s available auto-ISO capability I was able to let the camera select the minimum shutter speed to handle action and helicopter vibration, while I chose aperture for depth of field, with the camera riding the ISO as needed within a prescribed range.

The bottom line is that I anticipated that the combination of the D3 and the 200-400mm would be an ideal safari combination for this shoot, and in the final analysis it indeed was. I don’t know that this dusk elephant shot would have been possible with as high image quality using almost any other gear. 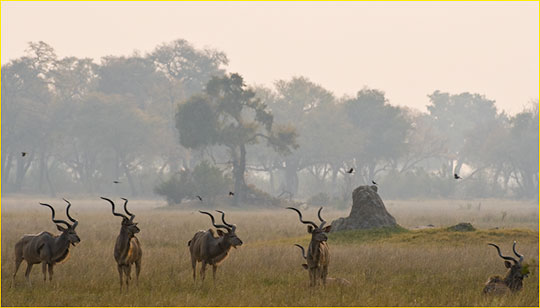 When shooting wildlife I am always less interested in doing portraits than I am of showing the animals in their habitat, in other words, in the landscape.

During the first week that we were in Okavango there was a great deal of smoke in the air from both local and distant brush fires, and this created an almost perpetual haze. This long lens landscape shows five male Kudu alert to potential danger, while a flock of birds flies in the other direction, creating a strange form of symmetry. 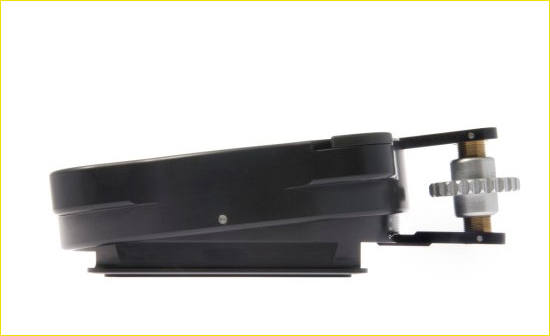 Giraffes are reasonably tolerant of Land Rovers and people. They don’t see us as a threat, and one can usually get quite close, unless a female is with a calf.

In this case though I spotted this giraffe at quite a distance and found the compression and haze effect at a distance of probably half a mile appealing. Though I didn’t use the 1.7X extender much in Botswana, this was one instance where it allowed me to get close enough to get the perspective andlookthat I wanted. 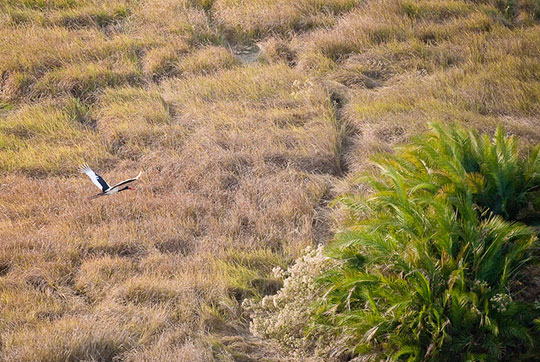 "Breathtaking"isn’t a word that I use often, in either speech or in writing. But flying at just a couple of hundred feet above the Okavango Delta in an open helicopter is an experience that can only best be expressed by that word.

The trick was in finding wildlife in the landscape and then trying to create interesting compositions, while being buffeted by the wind, awed by the scenery, and mentally dulled by the ear-splitting noise of the chopper’s rotors.

On a couple of occasions we found ourselves overflying birds, and this Saddle Billed Stork positioned herself appropriately for 1/4000th of a second against the passing landscape. (I probably could have gotten away with a lower shutter speed, but the combination of using a large, heavy lens at 400mm, wind, vibration, and movement, made me cautious to avoid any blur.) 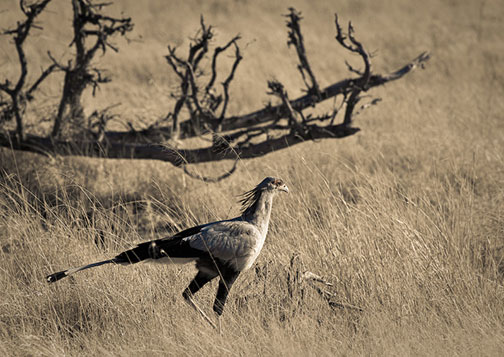 There are many choices to be made when finishing an image. Among these are whether to choose a colour or a monochrome interpretation. Sometimes colour is called for, and sometimes its a distraction. In this case the shot was about forms and contrasts so at first I converted to monochrome. But then I decided that something a bit more interesting was needed, so I desaturated the colour image and then added a slight warm tint. Just right. 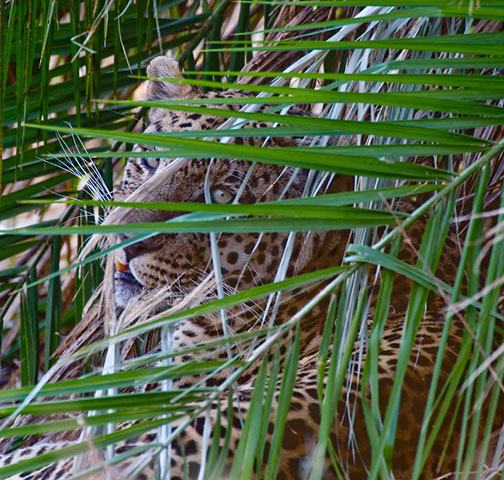 A truism of doing wildlife photography in Africa is that you can never have a lens that’s long enough or fast enough. Since wildlife (especially predators) are only active at night, or at best the edges of light, they can be elusive and difficult to capture.

We were fortunate in that several days of our Botswana shoot took place during a full moon, and this mean that leopards were out hunting at dawn and dusk, because the full moon provided them with reduced opportunities for nighttime stealth.

This female was found dozing in the grass just prior to heading of for her evening hunt.

Much more to come soon…

Adobe has just introducedLightroom 4.1 Release Candidate 2. Just another minor tweak? No, not by half. LR4.1 RC2 includes a major new chromatic aberration removal