Although most of the world cameras are designed by Japanese companies, the annualPhoto Imaging Expoheld in Tokyo in March has never quite gotten widespread attention outside Japan. Although the event has grown in size over the years, few new products announcements have been made in Tokyo compared to overseas giants Photokina and PMA. 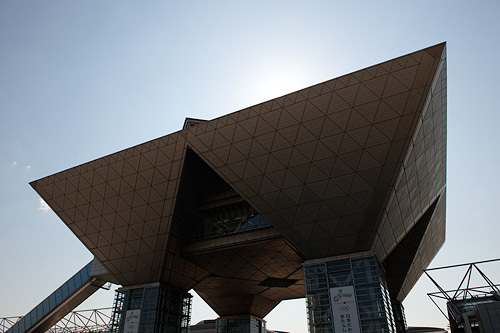 The very severe economic crisis hitting Japan might have influenced a bit the marketing strategies of some players, since some exciting new stuff was introduced during the event this year both on the higher and lower ends of the spectrum. Read on.

As a disclaimer, the overview below is by no means exhaustive, and I do admit that I very much focused on those brands I have a personal interest for besides the big guys… Forgive me in advance if the gear for which you were expecting updates is not listed below.

I had the chance to speak with Pentax representatives Yatsuyuki Maekawa and Hiraku Kawauchi who commented enthusiastically about the revive of their 645D digital medium format camera program. 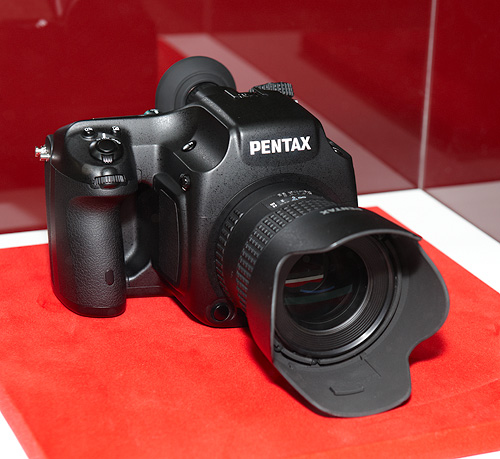 Although Pentax decided last year to push the pause button in the development of the camera in order to focus their engineers on the K line of DSLRs, they kept working in the background with various industry partners in order to progress on the specifications of the camera. The development has now been restarted.

Two huge prints made from the best so far version of the cameras were on display (they were easily 3m by 2m) and the level of detail was very impressive I have to say. The Pentax representatives commented that they we still not happy about the current level of quality and were aiming for even better. 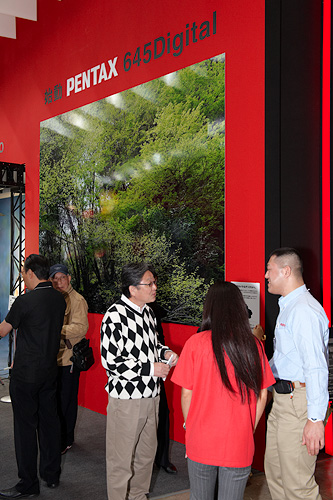 They have not taken a final decision on the sensor type/provider yet nor on its size and resolution. Previous iterations were built on top of a Kodak 31 MP sensor, and the camera’s resolution will be at least 30MP or more.

The current intention is to let customer decide whether they want a sensor with or without anti-aliasing filter, and it would be possible to add or remove the filter after the fact through a factory maintenance operation. Sounds like a good solution to me. The final decision to implement this feature or not has not been made yet.

The release date and pricing of the camera are also not fixed yet, but Pentax is targeting a 2010 availability at a price point no higher than 1 million yen (about $10,000). The camera would be marketed and sold worldwide.

As a side note, Pentax has announced that the production of the film version of Pentax 645AF camera ended September 2009, but maintenance will of course be continued for existing 645 customers. The production of Pentax lenses will also continue, and several new lenses are currently in the plans, starting with a 55mm and an ultra wide lens whose exact specifications remain to be announced. More details after the link.http://www.pentax.jp/english/imaging/digital/lens/roadmap.pdf

People invested in the excellent Pentax 645 system will surely be happy to hear about this encouraging news.

Following on the Phase one announcement yesterday, Mamiya did introduce at the PIE the new 645DF, its matching multi battery grip GB401 and their first leaf shutter lens, the AF80mm f2.8 LS D. 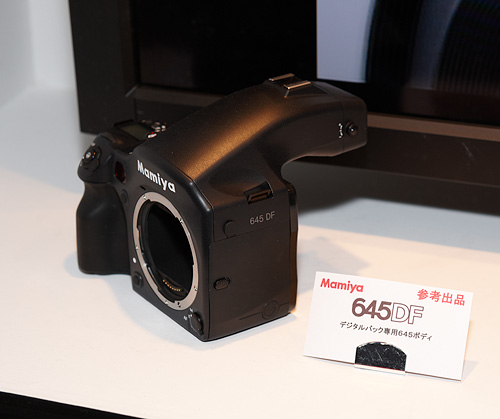 The 645DF is a digital only version of the 645AFIII able to support sensors up to 56×41.5 mm and weighting 1030 gr. It can support their own ZD back or any other digital back for Mamiya mount. The Mamiya representative didn’t provide too much detail yet on what exactly they changed, but the basic claim is that the focus on digital only allowed them to take various design decisions that improve the overall performance of the camera. They mentioned specifically AF speed and a better integration with digital backs. The camera would also be able to automatically sense the presence of a leaf shutter lens and switch from plane shutter to leaf shutter without user operation.

The new 80mm is able to synchro up to 1/500 sec, which is a bit slower than its competitors from Hasselblad (1/800 sec) and Rollei (1/1000 sec). Interestingly, the Phase one representative I spoke with mentioned that the Phase version of this camera, apparently to be called Phase one 645AF MkII will have slightly different specs, among which the ability to synchronize at 1/800 sec with the same 80mm shutter lens. 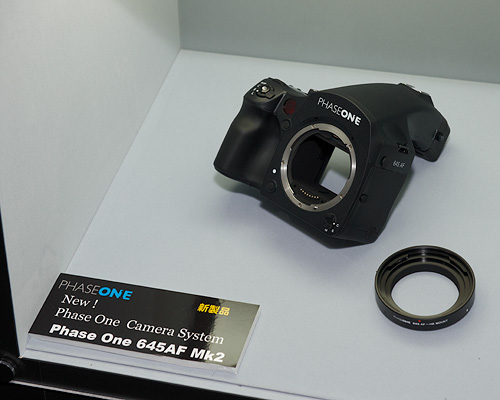 Pricing and availability of these items are yet to be confirmed but Mamiya mentioned that the price of the DF would be slightly higher than that of the 645AFIII and that summer 2009 was the targeted release time frame.

Mamiya also confirmed that other leaf shutter lenses were currently being designed, among which a 110mm, but the details are still kept under a tight lid.

On top of these high key announcements, Mamiya also presented a 4×5 adapter called HX401 that is dedicated to their own ZD back. It is due to be released on April 21st at the steep price of 268.000 Yen. It appears to be a neat design with a sliding capability enabling the switch from a ground glass to the back itself. The RZ waist level finder can be adapted to the ground glass in order to facilitate framing in the great outdoors. The adapter appears to weight 800 gr. 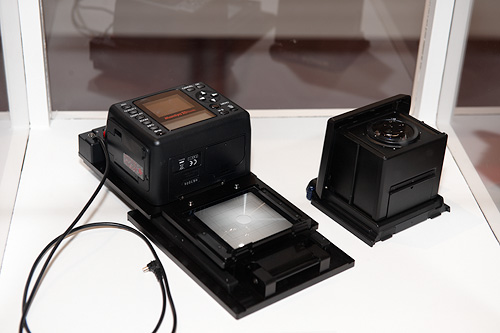 I had the chance to play a little bit with the new 17mm T/S and it sure appears to be a fantastic design. Compact and reasonably light with excellent build quality and well designed controls.

Besides, one of the major news of this PIE is that Canon indeed introduced their new higher low end camera, the 500D at the PIE. The camera is what you would expect it to be, an incremental release with more megapixels (15 MP), a supposedly improved high ISO noise behavior (native up to 3200 ISO) and, for those interested in motion pictures applications, 1080p video support in an interface that is mostly unchanged.

The camera will be called Rebel Kiss x3 in Japan and will cost about 80.000 Yen street price with an availability end of April.

Nikon didn’t seem to share Canon’s perception that the Japanese market had been neglected too long. The D40 had been due for a replacement for a few months now, but photographically speaking nothing new was shown by Nikon at the PIE besides impressive D3x art reproduction prints. Instead a new D40 low price campaign was just started. A D40 and lens kit can now be had in Tokyo at the pretty incredible price of 40.000 Yen with an additional 5000 Yen discount coupon. That is basically the same price as a Panasonic LX3 or Canon G10…

The one interesting item displayed on the Nikon booth was their futuristic media player called Media Port Up. Nikon is seemingly planning to expand these multi-media related devices in the coming months and years. I don’t know if the gentlemen below was totally convinced about the potential, but it is for sure an innovative product with potential. It is unfortunately a Japan only product as of now, more after the link in Japanese…www.upxup.jp 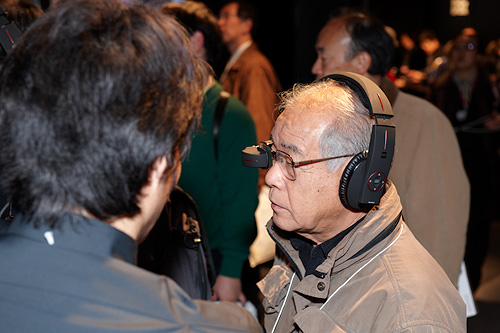 Besides their recent high DR Finepix F200 EXR compact digital camera, there was little new for consumers at the Fuji booth (leaving aside a new photoframe going by the cute name of DP-70SH). I guess that some were vaguely hoping that a FX successor to the aging S5 Pro would be announced, but the Fuji folks predictably declined to comment on this.

On the pro side, Fuji presented their new line of digital minilab called Frontier 700 series available in 7 versions with various capabilities.

I had the chance to speak with the Pictorico folks about their new line of Washi (Japanese rice papers) inkjet printer papers. These are very nice textured papers that I intend to try in the coming weeks. Pictorico does not provide any profiles for these papers because of the presence of randomly oriented large fibers that make the creation of representative stable profiles challenging.

Available in sheets or 44 inch rolls they are unfortunately currently not distributed in North America. Since ordering appears to be possible from their online store, there might be a bypass providing they accept to ship abroad.

Besides these interesting news highlights, the PIE is always a fun opportunity to dive into the Japanese photographic pop society. 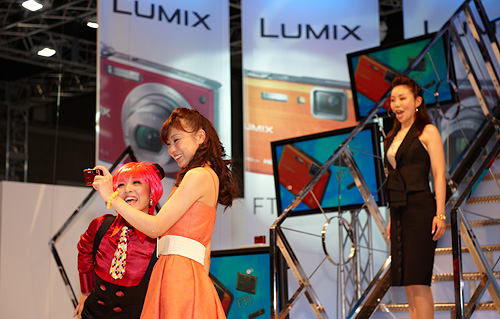 Although the mood of the event was probably a bit less high key that in previous years, most companies are clearly trying to keep aggressively marketing their product lines to maintain a sufficient stream of customer interest. This being said, Canon and Olympus had some of the largest booths of the show while companies like Sony and Nikon had a more modest presence.

FacebookTweet Watching the Charles Cramer series of videos here on Luminous Landscape was both tremendously educational and inspiring. It made me want to have another