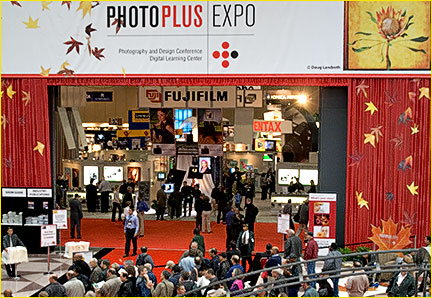 The annualPhoto Plus Exposhow inNew Yorkopened on Thursday, October 21st, and I spent the day there looking at a wide range of new products, many of which were first shown atPhotokinain Cologne, Germany last month. This was the first appearance of many of these products on this side of the Atlantic. Some of them are now just starting to ship, and several others will be in the stores before the end of November.

Here then, in no particular order, is a highly subjective look at the products that caught my eye in New York, as well as trends that I see developing.

NB:All prices discussed below are in $U.S.

My first impression was that the mood at the show was much more upbeat than it had been last year. Thursday, opening day, is typically attended mostly by professionals. Listening to the conversations around me, and talking to a great many photographers, I came away with a sense that the transition to digital is now virtually complete among working pros, and that rather than fretting over the transition, most are now over the hump and are concentrating on improving their workflow and technique.

The other primary "buzz" at the show was the strength of medium format digital. Yes, the prices are still very high, and out of reach of most amateurs. But working photographers are now looking very closely at the image quality advantages of MF digital, and finding most DSLRS now to be similarly position to MF, as 35mm film cameras were in the days of film.

The recent merger ofHasselbladandImaconhas had some interested repercussions. The new combined company is getting aggressive with pricing, and is offering their H1 645 camera body, along with 80mm lens and 22 Megapixel back for $22,000. They also were showing the newV96Cback for original Hasselblads – the so-called V series cameras. This is a 16 Megapixel back for just $9,600, including the required 40 GB Imagebank device. This means that virtually any Hasselblad ever made over the past half century can now become a 16MP mobile digital camera, for less than 10 large. Very exciting for many studio and wedding photographers with so-called legacy systems.

Interestingly, with Imacon married to Hasselblad, and Mamiya doing their own digital backs, several of the other back makers now seemed to have embraced Contax as their camera body of choice for demoing their wares at this show.

Creo-Leafwas demonstrating theirAptus 22and17backs. These feature a huge (3.5") touch-screen. These are also the first Leaf backs that are completely self-contained, using CF cards and an integral battery. Development is still underway, but I was told that they will start to ship in Q1, 2005. A fascinating new design.

Eyelike, a name that is not that that familiar in North America, due to limited distribution, was showing their neweMotion22, another completely self-contained 22 Megapixel back. Image quality from this company’s backs was impressive. 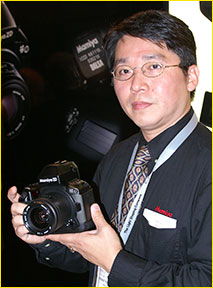 Mamiyahad on display their very exciting newZD camera and back. The camera is an exciting product that promises to bring photographers a complete 22MP camera, compatible with all Mamiya AF medium format lenses, for somewhere between $11– $15,000. Delivery is slated for Q1, 2005. I intend on staying on top of this story as it develops, because of the potential that it will provide the huge number of pros using Mamiya MF gear. No price yet on the back itself, designed for existing Mamiya medium format cameras. 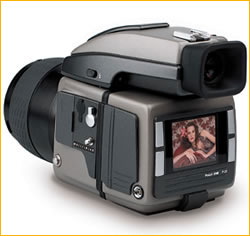 Phase Onewas featuring theContaxversion of theirP25, 22 Megapixel medium format back. This new version just went into production, and will start shipping over the next couple of weeks. It joins versions which are already shipping for Hasselblad V, Hasselblad H1, and Mamiya cameras.

This is also as good a time as any to mention that last week I placed an order for my ownPhase One P25back. It was purchased fromVistek, Canada’sPhase Onedistributor, and the country’s largest professional photographic retailer.

I’ve been impatiently waiting for theContax 645version to ship, and now that it has my last excuse has been removed. Actually, my second to last excuse was price, but with Phase One’s current trade in offer of up to $10,000 on existing MF backs, I took the opportunity to trade in myKodak DCS Pro Back 645. I’ll be using my new P25 for the first time on a week-long shoot inBig Bend National Parkin a few weeks, and that will give me an opportunity to file an in-depth field report here in due course.

Calumetwas showing a brand-new product, theCambo WDS 350. This is a high-end body and lens designed to take a variety of medium format digital backs. It provides architectural photographers with a light weight, highly versatile digital solution. It ships complete with the newSchneider Digitar 35mm XL f/5.6lens, and an appropriate back adaptor for most of the major MF backs. Delivery starts in January, 2005, and the price will be about $5,000.

Pentax? Sadly, when it comes to Pentax, they appear (at least so far) to have missed the medium format digital boat.Quelle domage.

One final comment on medium format digital. It seems as if each of the major companies now has a self-contained back. Till now only Kodak and Phase One had all-in-one backs containing storage as well as power. Clearly the days of the tethered medium format back are now drawing to a close, though all of these new backs also feature Firewire connectively for use in the studio. The rate of change over the past two years in this area is nothing short or astounding. I predict that by this time next year (Oct, 2005) tethered backs will have become moribund for most photographers.

Konica / Minoltawas showing theirMaxxum 7D, which will start shipping in a few weeks (early November). The big news here, in addition to it being the first DSLR from that company, is the built-inAnti-Shake, which provides image stabilization with almost all lenses. I am field testing the 7D right now, and hope to have a review online before the end of the month. The retail price will be approximately $1,600, which makes it just slightly more expensive than a prime competitor such as the Canon 20D, at $1,500. Not enough of a price difference to matter to someone with a commitment to Minolta lenses, or someone with a desire forAnti-Shakein the body.

Fujiwas showing theirlong-awaitedS3 Pro. The big pitch at the Fuji booth was for the camera’s expanded dynamic range. It looked impressive, but only a field test will be able to tell for sure. I hope to have one for testing soon. There was some considerable muttering among booth visitors though about the price, slated to be about $2,500 retail. Since this is for a 6MP camera (yes, I know that the files are interpolated up to 12MP – but that’s another discussion), some are seeing the price as uncompetitive. Time will tell. 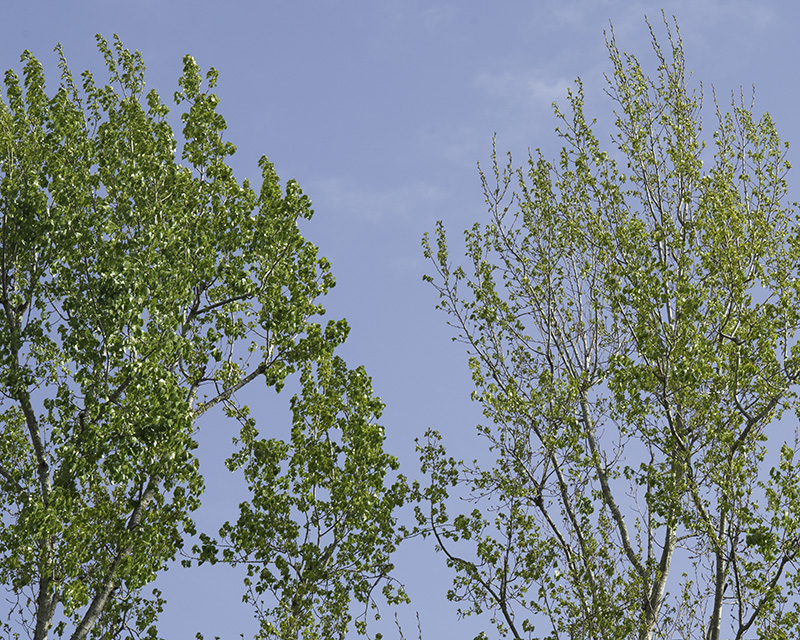 Leicawas displaying their upcoming (Q1, 2005) 10 Megapixel Imacon-designed interchangeable back for the R8 and R9 bodies. Rather than the mockup seen previously, this one was working, and looks promising. The only curious thing was that it was hidden away at a small table behind their main booth. What were they thinking of? 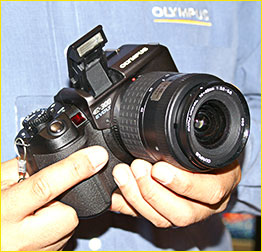 Olympushad on display theEvolt E-300. This 8 Megapixel 4/3 format DSLR will ship in late November, and will have a price of well under $1,000, including an interchangeable 14-45mm f/3.5-5.6 zoom lens. This is a killer price, and should be very well received in the marketplace. If the image quality is there, I forecast that Olympus won’t be able to make ‘um fast enough. My only problem is with the name –Evolt. It may grow on me, but for now it’sevolting. Only Pentax with the*st Dhas a less attractive product name for a camera. 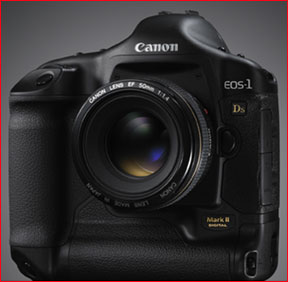 Canonhad quite a number ofEOS 1Ds Mark IIs on display. The word is that this exciting high-end 16 Megapixel DSLR will start shipping by mid-November. Why there are no review samples yet is anyone’s guess though. And yes, I will be reviewing it, and comparing it to medium format digital as soon as I can. 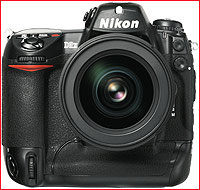 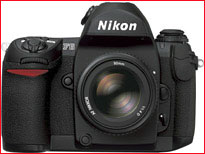 Nikonhad both the newD2XandF6on display, and their booth was constantly jammed. They are also now no longer singing the anti-full-frame song as loudly as they once were. My guess is that once Sony has a full-frame chip available we will see a full-frame digital Nikon. No idea on timing yet, but with Canon surging forward with its new full-frame 16MP camera, and medium format now at essentially full-frame 645, with 22 Megapixel chips, there’s no question that Nikon can’t remain locked into the tiny APS-sized 1.5X factor for all that much longer.

Other Items that Caught My Eye

Lysonwas showing a bulk-feed ink system for theEpson 4000. This usesLyson Cave Paintpigmented inks which the company claims provides a superior colour gamut to Epson’sUltrachromeinks. The system consists of dummy cartridges fed from external inks tanks. It has a price of $1,199, and Lyson claims that it ships with the equivalent of $2,500 worth of OEM inks. Image quality seems very good, but I have no idea what the use of this system will do to your printer’s warranty.

The gold-standard for calibration colour monitors for the past couple of years has been theSony Artisan. But, they have now been discontinued, and once dealer inventories are depleted they will be no more.Eizothough has stepped into the breach with their newColorEdge Calibration CCD Monitors. Available in both 19" and 21" versions, at $2,000 and $3,000 respectively, these really caught my eye. They take up a lot less room that anArtisanas well.

That’s it from this year’s show. There were, of course, many other products on display, both old and new. These though were the ones that caught my attention, and which I hope you will also have found to be of interest.

CONTEST CLOSEDThe Winner is Patrick Eozenou of Washington, DC   Summer time is slow for sales, so to warm things up, here is a Summer Madness Giveaway.