This page is a general introduction to my rainforest portfolio. You’ll find at the bottom of this pagelinksto 4 portfolios;Monkeys,Birds,IguanasandMiscellaneous.

As regular readers know my primary orientation is as a landscape photographer. But I also enjoy doing wildlife work from time to time. In February 2001, in pursuit of this growing interest, I spent a week atLapa Rios, an eco-lodge located on a nature preserve in the rainforest ofCosta Rica. The lodge is small‚ just 14 casitas; so with a maximum of 28 people it never feels crowded. The locale is the remoteOsa Peninsula, at the extreme southwest end of Costa Rica near the border withPanama. It is lowland rainforest and one of the areas of greatest biodiversity in the world.

Getting there isn’t terribly difficult. Convenient connection points toSan Jose, the capital of Costa Rica, are either LA or Miami, but direct flight are also available from Houston and Atlanta. After an overnight stay in San Jose we took one of the country’s small internal airlines for a 45 minute flight toPuerto Jimenez, the town nearest Lapa Rios with an airstrip. From there a dusty 45-minute ride in an open 4wd vehicle took us to the lodge. 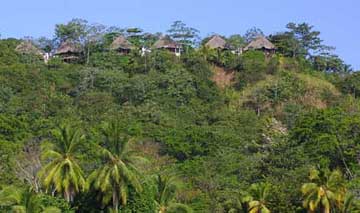 View of Lapa Rios from the ocean shore trail

Lapa Rios(River of the Macaws) consists of 1,000 acres situated on a ridge about 300 ft above the Pacific Ocean on the edge of the primary rainforest. It’s hard not to wax poetic over the locale and the lodge. Since this web site is about photography and not a travel guide, I’ll simply say that it is one of the most unique places I’ve ever visited and a must-visit for anyone interested in tropical birds.

Putting Together a Kit

Knowing what to pack in terms of clothing for this trip was easy. The recommendation was shorts, T-Shirts and hiking boots. That’s just about it. Anything over 25lbs would, we were advised, carry a weight penalty. When flying on the small internal airlines in Costa Rica, or if the plane was full these also might not even be allowed onboard. Knowing what to pack by way of camera gear therefore became doubly difficult because it started to come down to a choice between underwear and lenses.

As it turned out, though we took too much of everything we were charged only $20 in overweight and everything was allowed onboard. Some people that we met though said though that they had to leave half their clothes at the airport in San Jose because their plane was overloaded. I’m glad I didn’t end up having to choose between lenses and underwear. You can guess what my choice might have been. 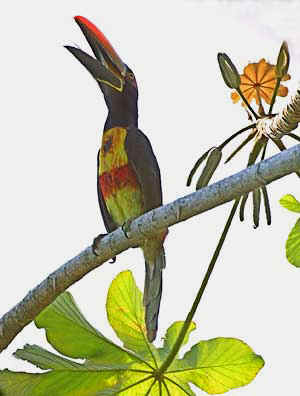 Because of the extreme heat and humidity I realized beforehand that I would not want to be carrying a lot of equipment on the hikes in the jungle that we would be doing each day. This, and the weight restrictions on the internal flights, meant limiting my camera gear to essentials.

I knew that my primary lens for birds would be, of course, a long telephoto. While I would dearly have loved to bring along theCanon 300mm f/2.8L IS, my long lens of choice was theCanon 100~400mm f/5.6L IS. I was correct in this decision because it turned out that there was no way that the 300mm could have been carried on any of the 1-2 hour hikes, let alone the ones that were 3-4 hours in length. My records show that the 100~400mm was used for more than 95% of my shooting, and 95% of the time was at the 400mm end of its range. A fixed focal length 400mm or 500mm lens would therefore have served as well.(Seeherefor more on my selection of Canon lenses).

Because I was shooting with the digitalCanon EOS D30(see below) this was equivalent to working at an effective focal length of 640mm. As you can see from some of these frames much of the time even that focal length often wasn’t long enough! 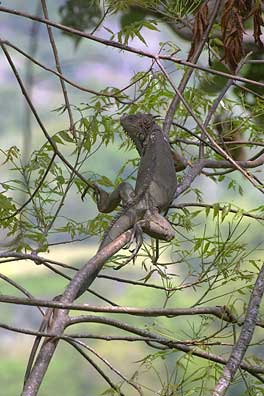 The other lenses brought along included theCanon 28~135mm f/5.6 ISzoom and theCanon 100mm f/2.8 Macro. The short IS zoom proved to be ideal for general snapshots on hikes and around the lodge, and the macro was used a few times for some detail shots of spiders and flowers.

The remainder of theLowePro MiniTreckerbackpack was filled with two flash units; theCanon 550EX, and theMD14E Ring lightfor use with the macro lens. Odds and ends included extra memory cards and AA batteries for the flash units. I brought along a set of standard filters, including polarizers — but no split NDs, as these would have been pointless in this environment.

I didn’t bring a tripod as the weight and bulk penalty was too severe. I counted instead on the benefits of Image Stabilized (IS) lenses, but I did bring aGitzo carbon fiber monopod. This turned out to be myleastuseful accessory as it was awkward to carry on hikes with the camera attached, and too slow to set up when fleeting wildlife shots presented themselves‚ even when used with aReally Right Stuffquick release system. After one morning’s use in the field I packed it away for the rest of the trip. 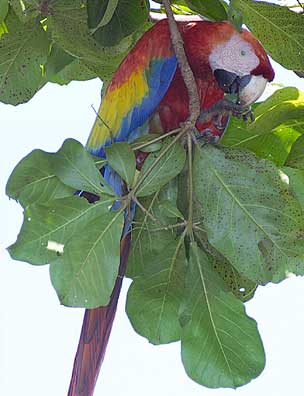 Themostuseful accessory on this particular trip though turned out to beArt Morris’Better Beamerflash extender. Without its use many of the bird photographs on these pages would not have been possible.

Finally, my equipment bag contained anCanon EOS3film body and 10 rolls of Provia 100F and 400F. These were brought along as backup for theD30but were never needed. (During its first 4 months my D30 has seen use in sub-zero temperatures and blowing snow at 10,000 ft in the Sierra Nevada, and in the humid jungles of Costa Rica. 5,000 frames without a single problem).

I always bring a pair of binoculars along when shooting wildlife and they were particularly important on this trip. Spotting birds and monkeys in the trees takes a sharp eye, and scanning for them with a long lens will tire ones arms out quickly. Because of the weight restrictions and also because of the lengthy hikes, heat and humidity, I used a pair of8X24 Swarovskymini binoculars. These have high image quality and are small and light enough to fit in a shirt pocket when folded. Don’t even consider a visit to Costa Rica without a pair of binoculars‚ you’ll miss half the show.

About Shooting in the Jungle with the Digital Canon D30

For the 4 months prior to this trip I had been enthusiastically using the then newCanon D30for almost all of my 35mm work. (My review of the D30 appears in theMarch / April 2001 issue of Photo Techniques Magazineand my online comments and critiques can be foundhere.) While I use medium format for most of my landscape work I use 35mm whenever low weight, fast handling, zoom lenses, long lenses, and motor drives are needed. In other words, when shooting wildlife.

The D30 is my first serious digital camera and it quickly has become a favourite. Early tests proved to my satisfaction that it is capable of producing images with image quality superior to the best that I could produce from film in print sizes up to 8.5 X 11 (A4), and superior to film generally in terms of colour purity and dynamic range. 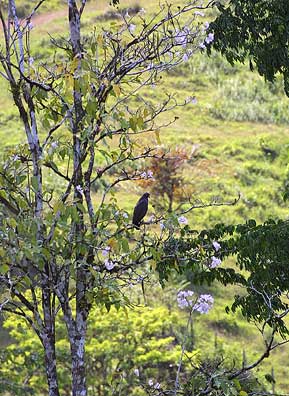 Of particular importance on this shoot was that I anticipated that I would do a great deal of my shooting at ISO 400. The jungle is quite dim even at mid-day, (average 1/30sec @ f/2.8 with ISO 400) andearlier testshad satisfied me that the Canon D30 at ISO 400 produces finer grained images that even the newProvia 400F ‚ the finest grained and highest resolution 400 speed transparency film available.

Indeed, this turned out to be a 400 shooting trip‚ 400mm focal length and ISO 400 speed‚ both used at least 95% of the time. (If you’re not already aware, the D30 has an imaging chip that is some 60% smaller than a full 35mm frame. This means that any focal length discussed here was in practice actually 1.6X longer, making a 400mm lens the equivalent of 640mm in terms of actual magnification).

Of course shooting with a digital SLR meant bringing along a moderate amount of additional gear, including a notebook computer and battery chargers. Every evening I would download the memory cards (1Gigabyte and 340 MegabyteIBM Microdrives). This would, of course, free up the cards for use the next day but would also allow me to load the most promising looking images intoPhotoshop. Not only is it enjoyable to be able to see how things are turning out but also invaluable for evaluating ones technique. Since I was doing a great deal of long distance fill-flash with theBetter BeamerI benefited greatly from the immediate feedback not only of the camera’s LCD, but also the evening’s review of images on the laptop.

I’ve divided the wildlife images into 4 sections;Monkeys,Birds,IguanasandMiscellaneous. In addition to information about each shot, including technical data, I’ve also described the various animals based on the reference books available and as well information provided by the very knowledgeable guides from Lapa Rios.

During five days at Lapa Rios I shot more than 1,200 frames, the equivalent of more than 30 rolls of film. Fortunately, because I was shooting digital and not film I didn’t incur the $600 or so of film and processing costs that this profligate shooting would have otherwise lead to. What you see on these pages is just a sampling of some of these frames since a great many are of smaller, less glamorous birds than Toucans and Macaws, and thus likely of interest only to birders.