Solar observing and imaging are one of the few astronomical activities that one can do during the daytime.  All that nature need provide is a clear sky.  As well, unlike many astronomical objects at night, the Sun is always there during the daytime.  Among the more interesting things to observe on the Sun are sunspots and solar prominences, both with their respective appropriate filters.

Observing and photographing the sun doesn’t require either large aperture telescopes or high magnification.  The Meade ETX 90 andQuestar3.5" catadioptric scopes are ideal due to their light weight and small size.  In fact, for eclipse work, which usually requires travel half-way round the world, these scopes are ideal since they can easily be transported as carry-on luggage.

TheTotal Solar Eclipseof August 11, 1999 in Europe was a great opportunity for anyone interested in solar photography.  I observed it from  Bucharest, Romania with my Questar.

One of the challenges of solar photography is in doing a polar alignment of the scope during the day.  For nighttime work alignment with Polaris is the usual approach, but obviously this isn’t possible during the daytime. Here then is a simply technique that I use to achieve reasonably accurate polar alignment with nothing more than a compass, a bubble level and knowing ones location’s latitude.  It works well with the Questar, and should work equally well with the ETX, though I haven’t tried this myself. 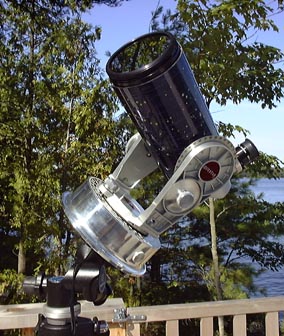 Above is a 3.5" Questar, mounted on a Manfrotto 410 geared head, atop a Manfrotto Tri-Man tripod.  This is my solar observing system, and portable system for nighttime use as well.  As shown above, the scope has been polar aligned to 45 degrees North latitude using the technique discussed below.

There are a few key elements to successful solar photography on location.  Obviously a proper solar filter is a must, (except for during eclipse totality).  A geared tripod head like the Manfrotto 410 is virtually a must, since very fine adjustments need to be made on the head as well as on the scope itself.  It should go without saying that the sturdiest tripod that one can travel with is also recommended.  I find that the Manfrotto Tri-Man fills that bill.

This is easier to do than to describe because of the complication of whether or not you are located above or below the 45th parallel. In either case though what you are attempting to do is to accurately transfer the very fine resolution of the scope’s vertical axis scale to the tripod head’s very coarse (or non-existent) scale.  By doing this you have eliminated the need to find Polaris, something that’s a bit difficult to accomplish in broad daylight.

Mount the scope and geared head on a leveled tripod.

Tilt the OTA (Optical Tube Assembly) on its equatorial mount (not the tripod head) to theexactlatitude of your location. 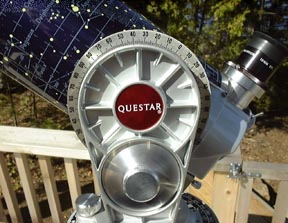 Now, tiltthe geared tripod headso that the scope is vertical (if you’re at or above 45 degrees latitude), as shown below. Use a small bubble level placed on top of the lens cap of the OTA to get an accurate level reading. 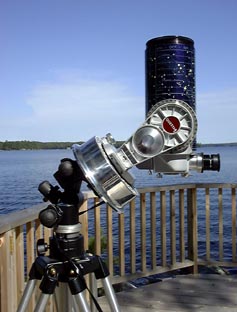 If you are locatedat or less than 45 degrees latitude, instead of tilting the head so that the OTA is vertical, tilt it so that it ishorizontal; i.e. so that the OTA itself is parallel to the ground. Use a bubble level on the top of the tube to adjust to exact level.

Locate North with a compass, or better yet, use a GPS.

Swivel the scope using the tripod head so that its polar axis ( an imaginary line drawn through the base of the scope up though its main axis) is pointing northward.(If you are working at below 45 degrees of latitude you’ll have to physically pick the scope up and turn it so that the polar axis is correctly oriented).

That’s it.  Your setup is now polar aligned and, depending on the accuracy of your settings, your mount should be able to track the sun for quite a while for solar photography. Even a rough setting is sufficient to keep the sun well within the central field of view of a camera located at prime focus during the roughly 2 minutes of totality during the August 11, 1999 European eclipse.