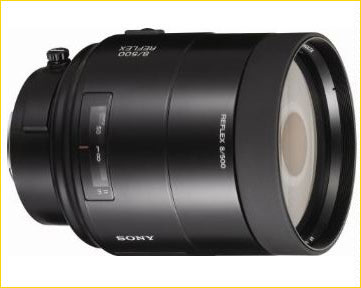 The history of catadioptic reflex telephoto mirror lenses is a long and honorable one. They are quite different from regular telephoto optics and telescopes in design in that they feature two internal mirrors that fold the light path, making such lenses much smaller and therefore lighter than a regular lens of a given focal length would be.

These have been around for telescopic use for ages, and 500mm to 1000mm versions have been made by various companies for SLRs since at least the 1960’s. Nikon in particular was a proponent of these lenses for several decades.

By about the 1980’s though these lenses fell out of favour and big honking super-telephotos became the norm, along with big honking prices and considerable bulk. Fast super-telephoto 500mm, 600mm and longer lenses are the wet dreams of many sports and wildlife photographers, and I have written numerous reviews of them for this site, including the Canon 500mm and 600mm lens some years ago, and more recently the new Canon 800mm. But with their $5,000 and up price tags, and considerable size and weight they remain dream purchases for most photographers.

For those with long memories in the industry there’s the 800mm Vivitar Series 1 Solid Cat from the 1970’s, a particular favourite of mine, which I reported on here a number of years ago.

Of course there are smaller and less expensive roads to long focal lengths. 500mm prime and zoom lenses are readily available without the wide apertures that the big guns have, and they are priced accordingly lower. But none are pocket sized – not by far, and thus are usually relegated to specialized applications.

In recent years mirror lenses have not had wide appeal for several reasons. Firstly, they don’t autofocus, and with their smaller apertures (f/8 typically for 500mm) accurately manual focusing such a lens is difficult. Secondly, there are no such lenses with image stabilization, and therefore the use of a tripod becomes almost a must, thus negating the main advantage of these lenses, which is small size and low weight.

As well, mirror lenses can produce doughnut shaped out of focus highlights, which some people find unappealing. They also vignette like crazy, though this is now trivial to correct with most raw processing programs.

In The Night Kitchen. Toronto, December, 2008

One of the pleasures of becoming familiar with a new camera system is finding the little hidden gems that sometimes lie within the line. In the case of the 24 MP full-frame Sony A900, reviewed here earlier in December, 2008, one of these treasures is the Sony 500mm f/8 Reflex Super Telephoto. This lens is the only reflex telephoto currently on the market. Uniquely – it offers autofocus capability, and when mounted on a Sony Alpha series camera, such as the A900, provides image stabilization as well, two of the features that in the past made such lenses less than appealing for contemporary DLR owners.

This lens was introduced by Sony in 2006 and is based on a design from Minolta that dates back to 1991. It retails for US $650, and comes in at 665 grams in weight ( 1lb 7oz) and 118mm (4.75 inches) in length. Quite coat pocket friendly and no burden at all even in a small camera bag. It comes with an included internal filter drawer and 4X neutral density filter.

Depth of field on a 500mm lens is very small, even at f/8. At a distance of a couple of hundred meters (yards) one is still not effectively at infinity, and even the smallest focusing discrepancy shows. This is why the fact that this lens can autofocus on a Sony Alpha body is so significant. Tests have long shown that an AF system is much more capable than the human eye in consistently achieving accurate focus.

When mounted on a Sony A900 one also has the availability of micro-focus adjustment. I used the LensAlign system and found that indeed there was a small but real back-focus shift to the particular lens and body that I was using, but which when discovered was then easily corrected. 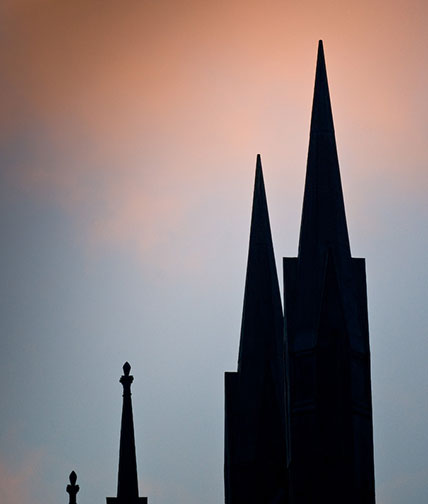 Because of the in-body image stabilization this lens is the only one of its kind that benefits from stabilization – when used on a Sony Alpha body. Due to the high image magnification what I found is that one needs to be particularly aware of keeping your eye on the vibration reduction indicator in the viewfinder. If you fire off a shot before it has settled (showing minimum camera shake ) the shots will be much less crisp that if you manage your breathing and wait a moment for minimum camera shake. This is much like shooting a rifle. The system’s low mass is deceptive though. It’s just like hand-holding a pair of 10X binoculars in terms of sensitivity to hand shake.

Conversely, it’s critical to remember to turn Steadyshot off when shooting on a tripod. Sony DSLRs don’t sense the lack of vibration when tripod mounted and if left on will actually cause more problems than it removes.

The bokeh (out of focus character) of this lens (and all reflex lenses) isn’t terribly pretty. In fact, depending on the subject it can be downright ugly. 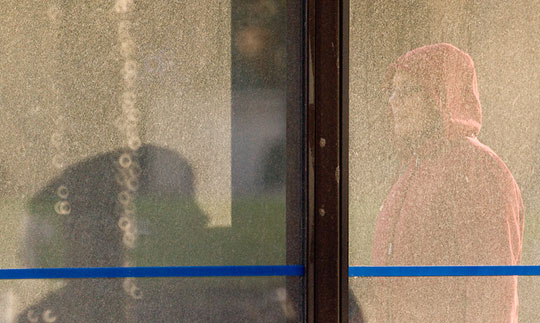 NB: This is not grain or noise that you see. It is dirt on the window of the bus shelter.

Because of the physical design of the lens, with a second mirror facing backwards behind the front element, out of focus highlights can appear as doughnut shapes. I shot for a couple of days without seeing the effect until I noticed it in the shot above. For most nature type shots (birds etc) this is not an issue, but it can be when there are specular highlights.

All lenses vignette to some extent. Reflex lenses do it big time. In the days of the chemical darkroom this was a real chore to correct, and if shooting transparencies for reproduction wasn’t even possible.

Roll your mouse over the image below to see with and without vignetting correction.
Click image to see a larger version. 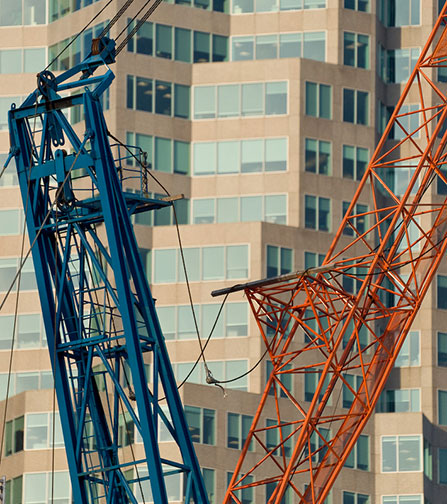 Whenever the Sony system is mentioned there are a lot of folks that take it to task for its sparse lens line up, particularly the lack of a Tilt / Shift lens. True enough. But there are some optical gems, such as the superb Zeiss Vario Sonnar 24-70mm f/2.8, the Sonnar 135mm f/1.8, and now the 500mm f/8 Reflex as well.

No, it’s not the sharpest 500mm in the world, but it is amazingly versatile, inexpensive, and when one learns its foibles and master its idiosyncrasies it’s an amazingly productive optic for the money. If you own a Sony Alpha system camera, and need a long lens, you owe it to yourself to check out the 500mm f/8 Reflex. A unique product in today’s market and potentially a compelling reason for some photographers to consider the Sony system.

Street Photography and Law In Italy

Publisher's Note:Michael and I received an e-mail with a link to Andrea Monti's blog article onStreet Photography and The Law In Italy.  It is not

The Problem With Photographing the Beautiful and The Famous

Whether your idea of beautiful is the latest hot actress or Half Dome in Yosesmite, there is a problem inherent in photographing them - how